In 2018 it seems totally normal that you can just hop online and find every release from pretty much every artist you can think of. Or  find out whether your copy of a record is valuable or not by comparing the matrix runout on yours with what you can find on Discogs. It’s so normal to get lost in a wormhole of clicks we even find ourselves fighting against it. But it didn’t used to be so easy.

Let’s rewind a second. Before Discogs existed if you wanted a complete and verified list of artist pseudonyms or a label’s back catalogue, you could only rely on hearsay from record stores, mailing lists and word of mouth.

Then late one September Friday in the year 2000, Kevin Lewandowski set history in motion when he entered the first Release into what would become the world’s largest music database. FYI the first release on Discogs was Stockholm, a Deep House double 12” from Stockholm based DJ The Persuader, released on the local House imprint SVEK (which,  20 years since it was released, still goes for around $25 USD on the Discogs Marketplace).

And anyway what’s more important is the amazing Database Community of about 291,000 people that submitted the first 9,999,999 Releases…

In line with our commitment to embracing open source (Discogs is built primarily with open source tools, and the database will always be free and open to the public), Discogs has always been built by its users, much like Wikipedia (except we’re older!).

This dedicated group of people is the heart and soul of Discogs. Every releases in the database was entered and edited by one of them.

They trawl dusty collections seeking out Releases that have not yet been archived in the database. They’ve spent collective decades in the Database Forum discussing the best way to enter information about these releases, so they can be easily found by anyone. And countless hours offering each other advice in the Submission Histories.

For the past decade the number of contributors in the Discogs Database Community has grown by about 20% every year, a clear testament to the fact that people all over the world want a tool to help catalog, organise, find, buy and sell physical media music.

But whilst there are all kinds of people who contribute to the database for all kinds of reasons, the vast majority of Releases added to Discogs are submitted by a relatively small number of people.

If we group people in the Database Community by the number of new Release submissions they have made over their lifetime at Discogs, we see that most of the contributors have only ever submitted between 1 and 10 Releases to the database.

The next graph shows that the vast majority of submissions are made by people who have contributed between 10 and 5,000 Releases each. But there are 137 people who have contributed more than 5,000 Releases each! Their submissions account for a whopping 11% of the entire 10,000,000 strong database. You can see a list of all the Top Contributors here. 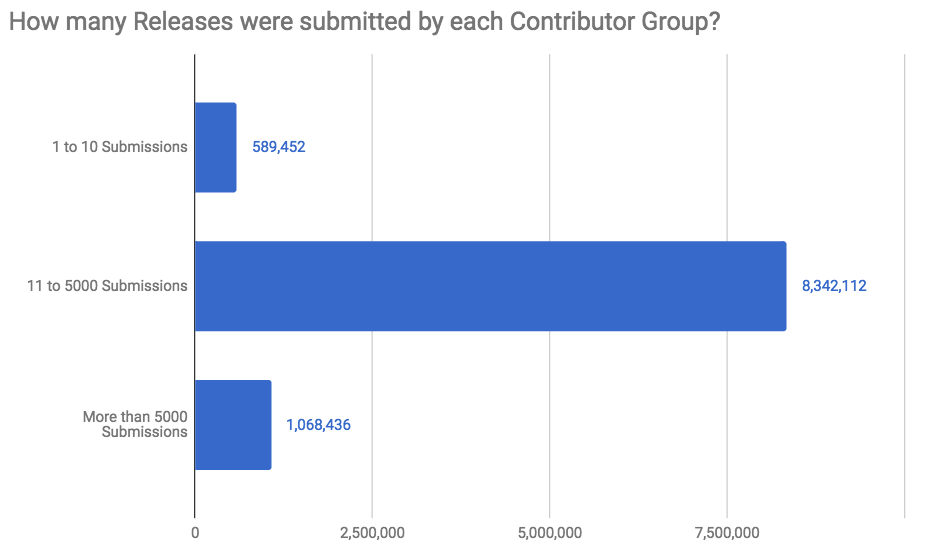 What they all have in common is a passion for documenting the history of recorded music and building an archive for anyone to explore.

What does the Database Community actually do?

With hundreds of fields available for cataloging, keeping the world’s largest crowd sourced music database clean and tidy is no small feat… To help maintain quality, new submissions are voted on by a community of experienced contributors. Voting privileges are earned by being a helpful and positive contributor to the site: understanding the Database Guidelines, making quality submissions and edits and engaging with other members of the community via the Database Forum and Submission Histories.

Since the beginning of time there have been:

After all that work, what does Discogs look like today?

At the time of writing there were about:

And here’s a breakdown of the most popular Genres in the database over time. Each row represents one month, and shows the percentage of all Releases by Genre that existed in the database at that point in time. 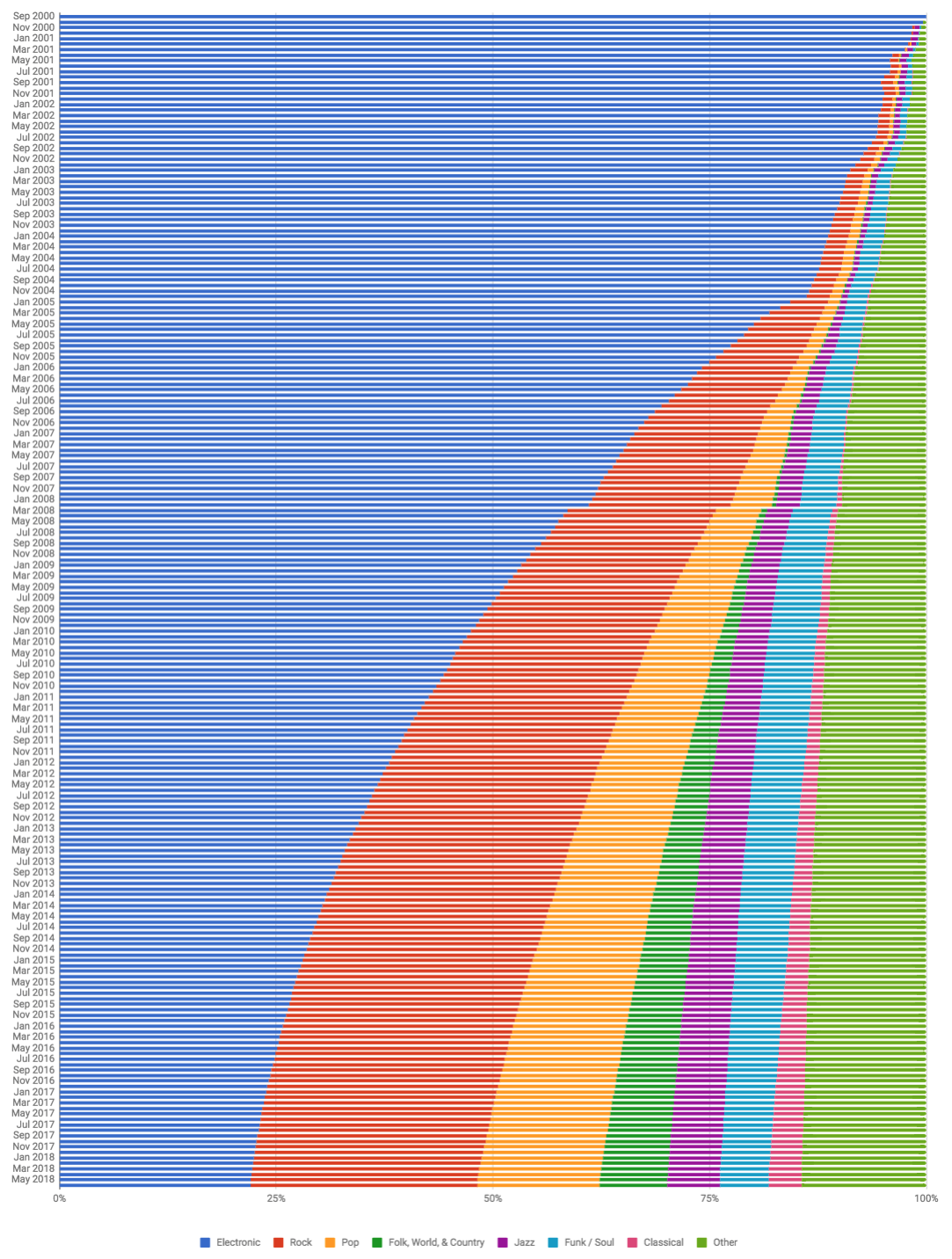 You can see that Discogs clearly started as an Electronic music database, and that Rock’s eventual takeover as the most prevalent Genre began just after we opened the database to contributions from everyone.

Want to celebrate more milestones like this one? Subscribe to one of the Discogs Newsletters.Interested in joining the passionate community of music lovers at Discogs?Sign up for an account to add releases to the Database, track your record collection and shop for thousands of music releases.