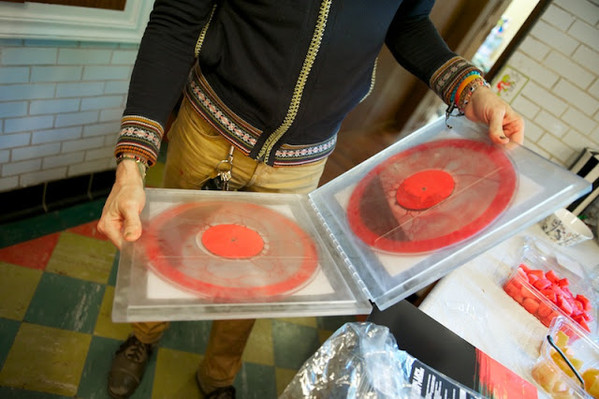 Discogs serves different purposes for different users. As much as you probably already know this is true, sometimes we need to remind ourselves of the versatile nature of the Discogs Database and Marketplace. Yes, Discogs can be the perfect place to check information about your favorite artists, use it for university research, buy records at bargain prices…and, yes our friends, buying a copy of some of the biggest holy grails for record collectors on Earth.

In the past, we’ve published articles about really cheap items you can score on Discogs. If you are good at digging on Discogs, you will be able to find some incredible stuff for a dollar or less. But I’m going to be honest with all of you, finding expensive stuff is much easier. As easy as clicking here. However, my intention with this article is to dig a bit deeper. Not everything you can find by sorting by price feels like a legit expensive collector’s item, so I decided to plunge into different releases from reliable sellers which have the potential to top the Discogs Top 30 chart in the future.

I’m going to be honest with all of you (part two). The judgment on whether these items are actually worth the money they are listed for is totally up to you. I obviously wouldn’t pay that money for a record, but I’m just a millennial struggling to pay for my rent and still manage to afford avocado toasts and tickets to festivals, so what do I know. For serious, wealthy collectors, some of these items are probably unmissable collector pieces worth spending all that money. No matter whether there’s no way you can afford these albums, the magic of Discogs and its transparency is that we can all take a sneak peek of these records without having to ask for a loan: You must have heard about this album before. In June 2018, a Canadian promo copy of the “evil” album became the most expensive item ever sold in the Discogs Marketplace, and to this day, it still holds that record. If this copy available on Discogs would ever sell, it would set a new record. Any takers? David Bowie – The Next Day

This very limited edition of The Next Day has been released in 2019 by Unicef UK for an auction for children and sorry to be Negative Nancy, but apparently 6 out of those 50 copies are currently available for sale in our Marketplace (oh, what a world…). Either way, just by having a quick look at Discogs you’ll appreciate that this edition is the hottest item from the British artist at the moment. You can definitely get your hands in this masterpiece for much cheaper, so no worries if you don’t feel like spending all of that money on this specific copy. It is estimated that fewer than 100 of these mono releases were pressed for AM radio stations in the U.S. and very few have been auctioned or come up for sale. It’s never been sold before on Discogs and a proportion of 2 “haves” to 114 “wants” is everything we needed to know in order to understand the price tag. Pink Floyd ‎– The Piper At The Gates Of Dawn (Test Pressing)

This copy checks every single box which might lead a record to the altar of collectors’ holy grails: Pink Floyd, Japanese, Test Pressing, 1960s, never sold before on Discogs. Too good to be true, right? There are two copies available for sale at the moment, both for $15,000. You’ll probably end up seeing this record in the Top 30. Moon Safari turned 21 this year, it’s not exactly what you would call a rare psychedelic album from Peru released in 1966. But what’s the trick? A copy of this specific release is the biggest holy grail for the fans of the French electronic duo. The reason? A copy of this record should have never reached the public. The record itself is exactly identical to the released version, but the gatefold cover is unique. Depeche Mode ‎– Dreaming Of Me

Depeche Mode, 1981, Mute Records, acetate… Everything about this release sounds like something we would love to indulge in. The only setback? We might not have the $40,000 that are being asked for this extremely rare release. The Beatles – Please Please Me

After checking the price history of this release, we can see how in 2013 someone had the incredible good luck of buying a G+ copy for £30 (roughly $36). That was the last time a copy of this edition of Please Please Me was sold for less than $2,000. And currently, there isn’t a single copy of the album selling for less than nearly $7,000. It doesn’t seem like the trend we analyzed almost a year ago will slow down any time soon.

Stop wiping those tears, you can still buy a different edition of this album for a very affordable price. But if you want this extremely limited test pressing, then start getting your bank account ready because it won’t be yours for cheap.

Beloved psychedelic legends The Flaming Lips aren’t exactly new to the world of very weird editions that sell for big bucks. We mean it, there are a lot of those. This one, for your reference, is an album including collaborations with Bon Iver, Kesha, Tame Impala, Nick Cave, Prefuse 73, Lightning Bolt, Erykah Badu, Yoko Ono, and many other (incredible) artists. But that’s not what makes it so special, song titles include (I’ll only going to mention those which are weird but not highly offensive): “The Supermoon Made Me Want To Pee”, “I’m Working At NASA On Acid”, or “Is David Bowie Dying?”. But again, that’s not what makes it so special, what makes it so special is that the double LP is filled with blood (ewwwwww). No wait, even better, it contains blood from Chris Martin, Alan Palomo, Erykah Badu, New Fumes, Kesha, Justin Vernon, Alex Ebert, Stewart Cole, Jim James, Brian Gibson, Brian Chippendale, Sean Lennon, Charlotte Kemp Muhl. But don’t ask us specifically whose blood is in your copy. Sometimes the notes of a release can do our job and, you know, here you go:

First and only notated copy in the collector’s world.
Pressed and distributed to promote the upcoming release of the “Band of gypsys” lp in late March 1970.
Note letter found enclosed in sleeve of disc when discovered.

I mean… You won’t expect an item like this one to sell for cheap, do you?