If you’re anything like me, you haven’t spent a lot of time with Bob Dylan’s 1980s material. The mixed reviews throughout the years have caused many listeners to hit pause and return to his tried and true albums from the ‘60s and ‘70s. In late 1980, Dylan himself began to reflect on his early work. His 1960s classics found their way back into his repertoire and he billed a brief run of shows as “A Musical Retrospective” before shapeshifting once again as only Bob Dylan can.

He was at a crossroads, both spiritually and creatively, but there are plenty of highlights from the ‘80s worth celebrating. With the upcoming release of Springtime In New York: The Bootleg Series Vol. 16 (1980-1985), there is no better time to revisit this era of his career and decide if you’re an ‘80s Dylan fan or detractor. 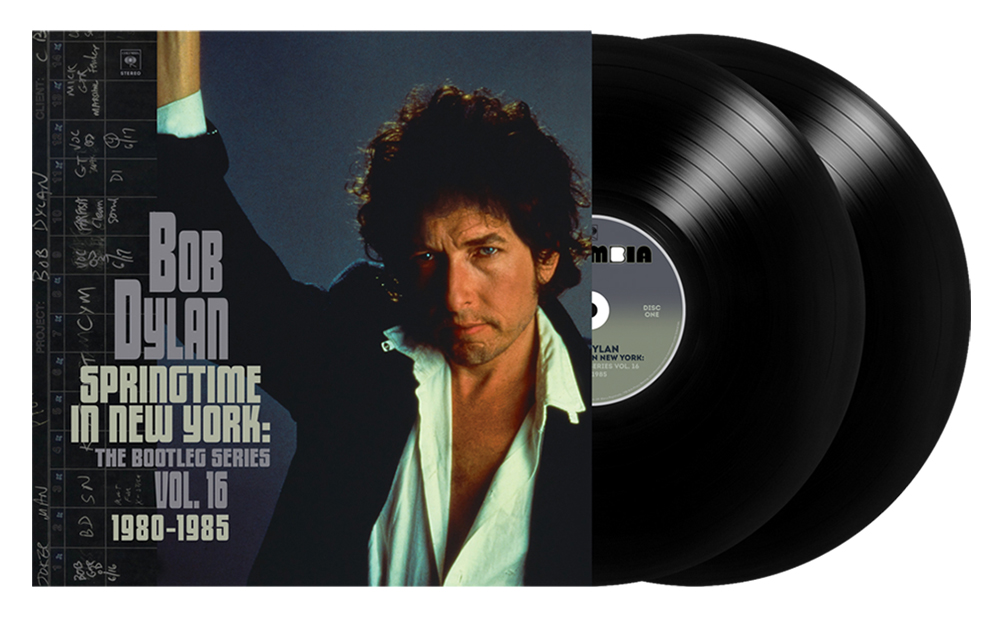 Starting the ‘80s on a high note, he was the first artist to ever receive the Grammy Award for Best Male Rock Vocal Performance. The chart-topping “Gotta Serve Somebody” was released as the opening track on 1979’s Slow Train Coming. This album marked the beginning of what is commonly referred to as his Christian trilogy. Dylan’s renewed faith and involvement in Evangelical Christianity caused a divide in his fanbase. John Lennon famously criticized the award-winning song by writing a parody version called “Serve Yourself”.

Bob Dylan followed Slow Train Coming with his first two ‘80s offerings and the last two albums of his gospel trinity. First came Saved, an album that showcased Dylan’s deepening faith. Although it has been criticized for its lyrical themes and true to form gospel compositions, the backing band is impressive and the vocal arrangements are some of Bob Dylan’s most ambitious. “In the Garden” remains a standout song from Saved if you’d like to ease yourself in slowly.

Next came Shot of Love. Dylan began to incorporate more rock and roll elements again and the subject matter became divided between the secular and the sacred. One of the album’s singles, “Heart Of Mine”, is a classic in its own right with memorable contributions from Ronnie Wood and Ringo Starr. The album closer, “Every Grain Of Sand,” has been universally celebrated and rightly so. Its ethereal qualities and deeply personal lyrics eloquently bring this divisive chapter of his career to a close.

After experiencing some critical backlash, Dylan took some time off from touring and started working on his next album in private. He also took some time to catch up with his son, Jesse. The two frequented punk and new wave shows to see artists like The Clash, Elvis Costello, and X.

With a fresh creative approach and a full return to secular songwriting, Bob Dylan released Infidels in 1983, an album praised by many as his best since Blood on the Tracks. With his poetic prowess and melodic sensibilities once again leading the charge, Infidels is chock full of classic Dylan-isms. The opening track, “Jokerman,” has appeared on multiple “best of” compilations and the music video prominently displays some of Dylan’s finest lyrics in years. One could argue that it’s one of the first lyric videos.

The music video for “Jokerman” is considered one of the first lyric videos.

Empire Burlesque came next. This 1985 album fully embraced the production techniques of the day and many critics and fans have argued over the album’s merits due to its very ‘80s sound. Regardless of where you stand on its overall aesthetic, the album is not without its moments. Album closer “Dark Eyes” is a stark acoustic song that is sure to please any Dylan purist.

Luckily for us, Springtime in New York: The Bootleg Series Vol. 16 (1980-1985) features a wide array of odds and ends culled from Shot of Love, Infidels, and Empire Burlesque. Like other titles in the acclaimed Bootleg Series, the collection features previously unreleased rehearsal recordings, live performances, outtakes, and alternate takes.

The outtakes from Shot of Love feature a cover of Hank Williams’ “Cold, Cold Heart.” This hard-to-find rendition is a key piece of the Dylan puzzle as he has covered many of Williams’ songs over the years and credits him as one of his biggest influences.

Alternate versions from the Infidels sessions include fan favorites “Jokerman,” “Blind Willie McTell,” and — for the first time — the unedited version of “Death Is Not the End.” One of Bob Dylan’s most iconic TV performances is also immortalized with the inclusion of “License to Kill” from his 1984 appearance on Late Night with David Letterman. Going to shows with his son may have rubbed off on him as he tore through revved-up versions of Infidels tracks and a Sonny Boy Williamson song with members of Los Angeles punk band The Plugz.

Unreleased tracks from the Empire Burlesque sessions complete the collection. In true Dylan fashion, he recorded multiple versions of songs until he got them just right. The slow and fast versions of  “When the Night Comes Falling from the Sky” provide unique insight as we see what the song could have been before he went full “Disco Dylan.” For some, this may be the perfect opportunity to connect with this material in a whole new way.

Whether you’re all in, partially interested, or remain a nonbeliever, these are some essential artifacts as you dig deeper into Bob Dylan’s ‘80s output and his constant evolution as a truly singular artist.

Published in partnership with Sony Music.