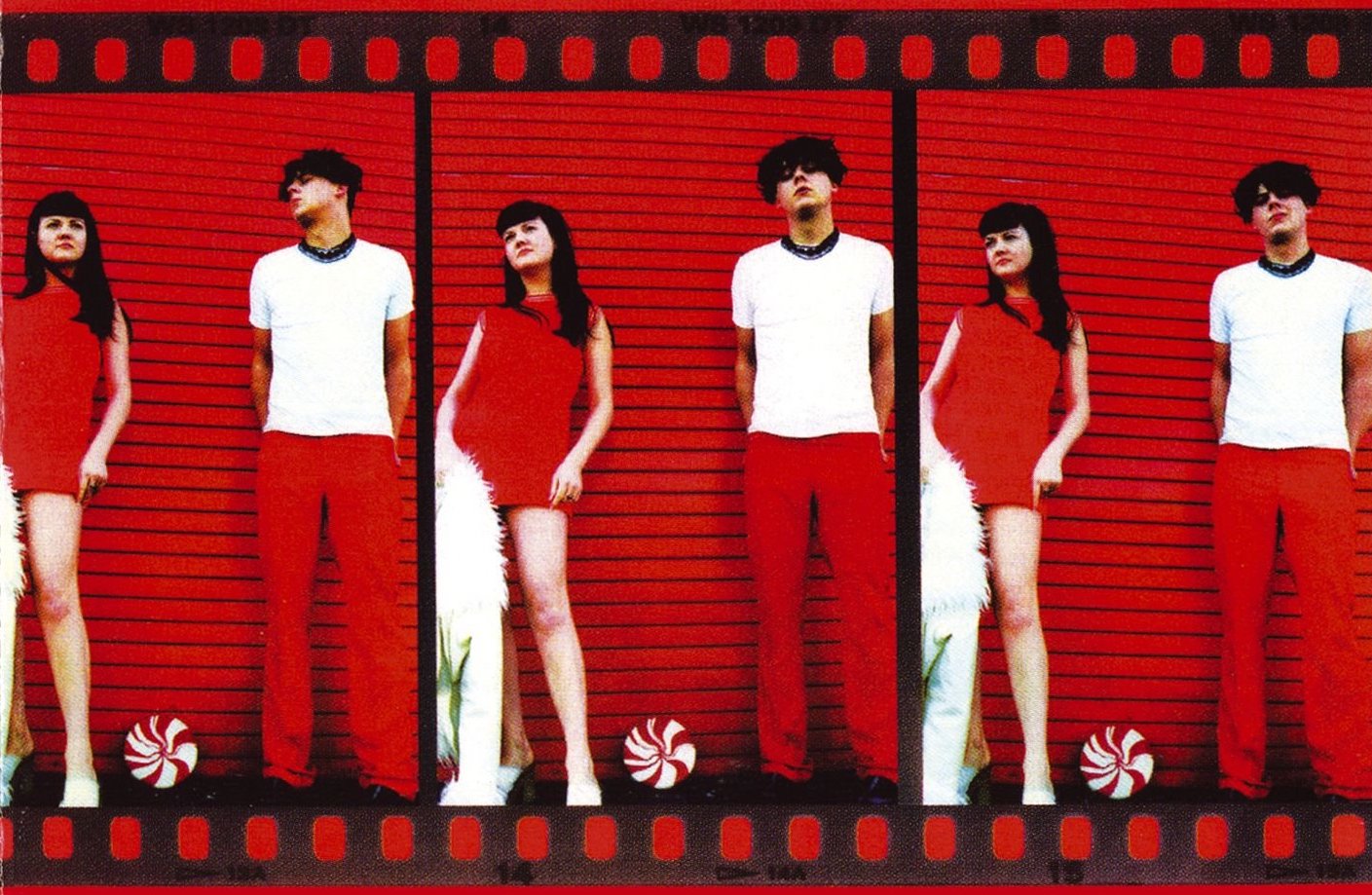 Late ’90s rock music is well described in deep blues and grays. The summer of 1999 was dominated by Red Hot Chili Peppers‘ introspective ballad Scar Tissue. Buckcherry and Def Leppard were grabbing No. 1s on the Billboard rock charts, while the post-grunge of Creed and Bush gained traction on radio and MTV alike.

It was a time of muddy sounds, crunching and down-tuned with a tinge of melancholy – but quietly in the background, a peppermint storm brewed. A married couple posing as brother and sister were blending childish innocence and unfiltered clamor with the rolling thunder of Delta blues and the growling madness of garage rock. The duo took the name The White Stripes, a cheeky lark on their last name that hinted at an eye for design while nodding at their penchant for black music.

They wrote without overthinking and come out swinging, giving birth to a retro-punk sound that would define the 2000s and make the band’s frontman a generational icon of rock’n’roll. On June 15, 1999, The White Stripes released its self-titled debut. It’s a furious, 17-track collection of fast songs that hit heavier than most bands of the time without featuring any bass. Jack White‘s roaring guitar was so filtered and energetic, it became it’s own wall of chaotic sound, while his partner Meg‘s steadfast and straightforward drum technique set an industrial pace.

With fun at its core, The White Stripes was destined to breathe fresh madness into the American rock scene, eventually sending shockwaves of influence throughout the music world for decades to come.

The story goes that Jack Gillis and Meg White met as high schoolers at Detroit restaurant Memphis Smoke. Meg worked as a waitress and Jack came to read poetry at the open mic night. The two bonded over a love of music and married in 1996. Jack defied tradition and took Meg’s last name.

Jack worked as an upholstery apprentice and played in local bands The Go, The Hentchmen, and Two-Star Tabernacle. Legend has it Jack asked Meg to play drums with him on Bastille Day of 1997. He told Rolling Stone that “when she started to play drums with me, just on a lark, it felt liberating and refreshing.” Her style is notably sparse, hitting like a hammer and square on the beat, providing a steady, dedicated, pulsing rhythm. Inside her clockwork blows, Jack’s electric guitar wails and spasms, filling audience’s ears with fervent noise.

Spurred by the excitement of something fun and new, The White Stripes wrote a swift multitude of songs. The duo held it’s first concert in August of that year, and by 1998, recorded and released the singles Let’s Shake Hands and Lafayette Blues. Those two songs appear as later additions on reissues of the debut LP. 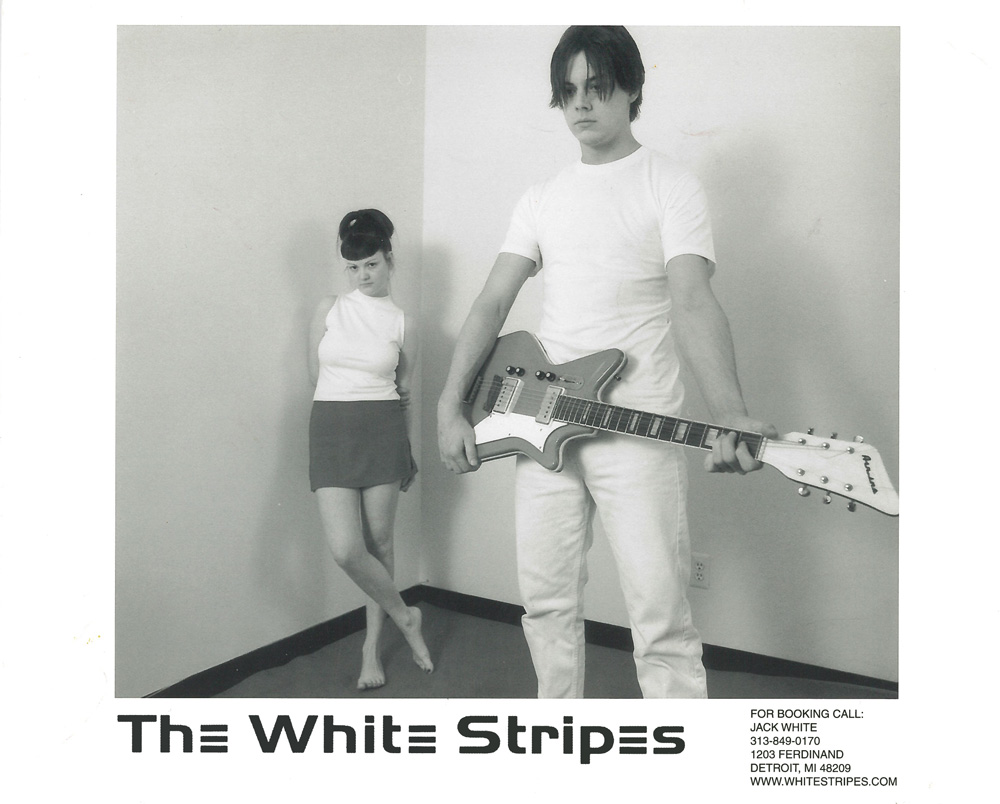 The White Stripes was recorded in March 1999 in Detroit studio Ghetto Recorders. It was self-produced by Jack and engineered by Jim Diamond, a man who played an instrumental part in the careers of fellow indie rock groups Electric Six, The Sonics, and more.

The album is characteristically raw and lo-fi. Its simple composition and DIY feel dares the listener to grab their own instrument and let it roar. It thrashes in attitude, infusing classic blues hits with the unbridled audaciousness of white urban rockers The Who or The Clash.

Jimmy The Exploder, the album’s bold and bright opening track, has been called an ode to that rowdy ethos, specifically guitarists who destroyed their own instruments on stage. It channels volatility but removes the danger in destruction with innocent and innocuous lyrics about an angry monkey.

The naive joy of childhood is echoed in every aspect of the band’s presentation. Where other ’90s bands dressed in the comfortable clothes of the working-class everyman, The White Stripes always wore a striking combination of red, black, and white. They made themselves a lo-fi spectacle, minimal and yet cartoonish. Often speaking in rhyme, Jack referred to Meg as his sister – a distinction that confused many fans and journalists who later learned the pair were, in fact, married.

When Jack sings on this album, his voice is high-pitched and fevered, almost deranged, like a man on edge. The song Astro is a great example. It’s bouncy, repetitious, and practically meaningless. It harkens back to dance songs of the ’50s, while Jack lists a number of people who “do the astro.” It turns out “the astro” is anything we do in private and don’t share with the rest of the world.

This madness is well-tempered by a deep sense of soul, the trademark of blues and classic country artists Jack admires so much. The White Stripes features a number of covers, the first being a rousing rendition of Robert Johnson‘s Stop Breaking Down. Meg’s crashing cymbals and pummeling beat really shine on that cut, turning the rootsy original into a straight headbanger.

There’s a cover of Bob Dylan>’s One More Cup Of Coffee and a spirited rendition of St. John’s Infirmary Blues. Album standout Cannon moves in two distinct parts, the midsection of which interpolates the famous words of Son House‘s John the Revelator. In the end, the band dedicated the entire album to House’s memory.

Jack creates his own trudging blues on Wasting My Time and Suzy Lee, the latter of which features slide guitar from Johnny Walker, as does I Fought Piranhas. Walker taught Jack the technique which, would become a favorite of the artist’s. The blues-riddled Broken Bricks is a lyrical highlight, too, as Jack vividly paints the decrepitude of turn-of-the-century Detroit. The song crashes and crunches as White sings the apocalyptic scenes wherein a young woman matures.

When I Hear My Name and its follow-up Do explore anxiety in punky ups and bluesy downs. Little People and Sugar Never Tasted So Good tackle sex in quirky innuendos. Screwdriver and Slicker Drips pay homage to the cocky sound of The Stooges, but it’s breakout single Big Three Killed My Baby that mark’s the album’s crowning achievement.

Not much of a political act, The White Stripes’ “Big Three” (a colloquial term for Ford, GM, and Chrysler) takes aim at Detroit’s automobile industry. It denounces their products as deadly and their motives greedy to the core. It was a big hit on the indie scene, but it would take two years and the same amount of albums for The White Stripes to break commercial success.

Jack and Meg divorced in 2000, but the band kept churning out LPs. In 2001, White Blood Cells singles Fell In Love With A Girl and Dead Leaves on The Dirty Ground brought the duo rotation on radio and MTV, prompting fans and critics to invest loads of attention in The White Stripes and sophomore effort De Stijl. Alongside contemporaries, The Strokes, The White Stripes’ popularity signaled a shift back to rock basics.

The duo’s untamable energy and unbridled showmanship on stage made them quick stars. The strange story of a divorced couple lampooning as brother and sister was too strange to be ignored, but it might have contributed to the end of the band. The White Stripes burned through decade an unstoppable force only to fall apart in 2011.

Meg stepped away from the stage for good, but Jack White has been welcomed into the pantheon of rock heroes, starring opposite Jimmy Page and The Edge in the rockumentary It Might Get Loud. His bands The Dead Weather and The Raconteurs continue to tour and record to much acclaim.

Jack White is also a successful solo act, headlining festivals around the world and covering White Stripes favorites with full band accompaniment. It’s easier with all that arrangement to hear how country influenced his early work, but there’s something indelibly iconic about the bare-bones brawl of the true Jack and Meg originals.

Twenty years after release, The White Stripes stands out for its raw spirit. Jack shines bright with his ex-wife holding him down. It’s an iconic garage band sound; a straightforward, un-muddled genius that doesn’t need to be smart to feel superior.

“I still feel we’ve never topped our first album,” Jack told Guitar Player in 2003. “It’s the most raw, the most powerful, and the most Detroit-sounding record we’ve made.”

In Partnership With Third Man Records