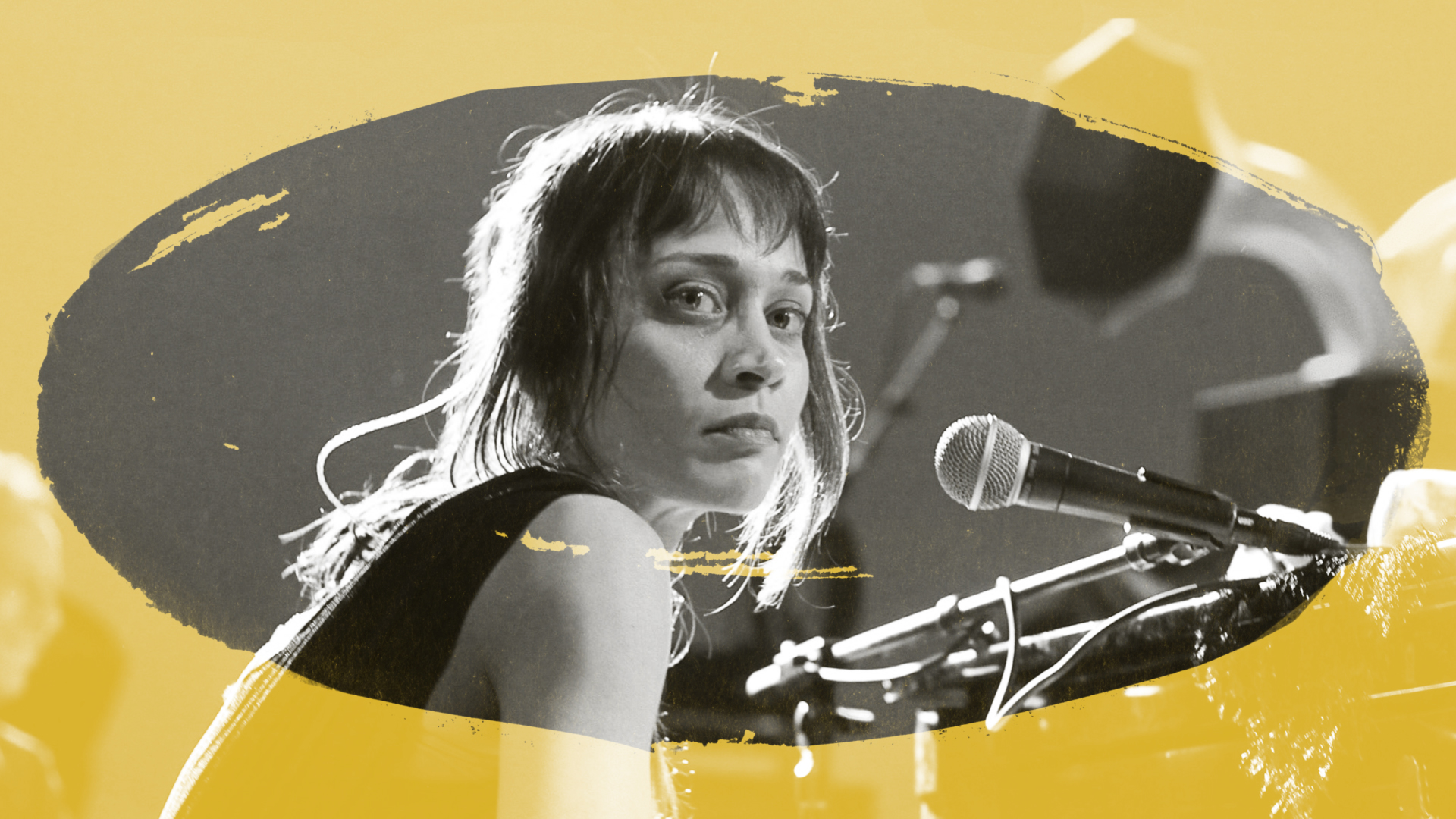 Heavy is a head that wears a crown, but anti-pop Queen Fiona Apple wears her burdens with intensity and grace. The Grammy-winning singer-songwriter and masterful pianist has spent a quarter-century turning life’s discomforts into wreaths of glory. At 19, she stormed the world with a fist-full of arresting truths sung full and throaty over jazzy rhythms. She’s a painter and an alchemist, mixing fury and melancholy to create vast tapestries of confidence in which fans around the world have draped themselves.

Apple burst onto the scene alongside fellow ’90s feminists Alanis Morrissette and Tori Amos. She stood out with comparisons to Nina Simone and Billie Holiday, leaning into her training. Pain and anxiety has always been a central theme, but she weaves it skillfully into emotional compositions, matching the music to the mood in potent and dizzying performance. Her poetic lyrics are her calling card, but the sonic scenery of her songs is a main character, too.

The stage is in her blood. Apple was raised by a singer and an actor, granddaughter to a big band singer and a dancer. After being raped at 12, she developed an eating disorder and anxiety attacks, but she also learned to fight in self-defense. When the world turned its critical eye on her, and when future loves pushed invisible buttons, she knew how to return the attack, and in Apple’s case, the pen is a bloody sword. She has released her fifth album today, Friday, April 17, Fetch The Bolt Cutters and in celebration of her next evolution, we take a look back at each poignant phase.

A Guide To Fiona Apple’s Discography Apple came into the music world like an earthquake. Her boom came from somewhere deep inside the soul. It rumbled through the foundation of the industry, shook the rafters of society, and left ripples of aftershock for decades to come. She was 19 upon Tidal‘s release, though she’d penned its 10 songs years earlier. A beguiling mix of pop, jazz, singer-songwriter and chamber music, it puts Apple’s poetic lyrics and powerful vocals under the spotlight. Sweet melodies mingle with bitter words that tackle weaponized sexuality, the empty pang of forced adulthood, sensual fantasies, personal strength, heartbreak, seduction and self-softening hope. Classic, ghostly and experimental, it brought a heavy edge to compositions of harp, marimba, vibraphone, cello and so much of Apple’s moody piano. Striking and subtle, Tidal grabbed America by the throat and whispered in its ear, pushing the album and its sly hit “Criminal” to the top 40 of pop and alternative charts. “Criminal” earned Apple a Grammy for Best Female Vocal Rock Performance, and when accepting her MTV Award for Best New Artist, she cemented her bad bitch status with a “controversial” speech that pleaded with kids not to look up to Hollywood rock stars. Tidal was the unholy red carpet for a different kind of darling, and When The Pawn… was the Queen’s hostile parade. Released in 1999, the album’s long title took the Guinness Record for nearly 10 years. The full text is a poem written in response to bad press in Spin and letters to the editor it incited. All the detractors brought forth a more vengeful Fiona. When The Pawn… is a daring, damaged woman manifesto, one that takes insults, rage and mean lovers and turns that turmoil into might and authority. Hit “Fast As You Can,” “To Your Love” and “A Mistake” wallow in the pleasure of pain, wearing the instability like a badge of honor. What young woman can’t relate to the then 22-year-old singer’s devious delight. The sword is double-edged, though, as her pen grapples with the understanding that she finds joy in the pain. “On The Bound,” “Love Ridden” and especially “The Way Things Are” dares to wonder where she’d be without the vitriol. Would her fire still burn so bright? Musically, Apple ups the production, experimenting with drum loops and edgier compositions. Strings and piano still build the spine of the work, but these songs twist and gnarl with the grime in her spirit. It is beautiful, complex and full of passion, a perfect Fiona Apple record even if it didn’t sell quite so many LPs as its predecessor.

After touring When The Pawn…, Apple hit a comfortable creative block. She figured the songs would come to her, and they did in 2002 when Pawn producer Jon Brion pleaded with her to write new material. The process was not without its problems, though. When an early version of the album leaked, fans protested Epic Records, assuming they’d shelved the album for lack of commercial viability. In fact, Apple was displeased with the production, choosing to work with different producers to re-record.

The final release was a sonic and lyrical departure. A bit playful and punchy with its rhythms and melodies, Extraordinary Machine… lacks the sultry soul of her first two albums, as well as the punctuating rage. It’s a true breakup record, one that works its way through the stages of hurt. Apple blames herself, then she becomes angry, and in the end, she learns a new skill in moving on. On single “O’ Sailor,” a classic-style Apple still sees herself as the happy victim. By “Oh Well,” she’s ready to put a cheating lover on the shelf, and on “Red Red Red,” she’s pushing her self-destructive habits to change. “Not About Love” is a clear compositional stand-out, a vivacious and “schizophrenic” dance of changing tempos and time signatures that captures the full force of a lovers’ quarrel, but the album’s closer may be it’s best song (and one strangely appropriate for the COVID era), wherein our heroine truly accepts herself as she is, whether or not she’s spinning her pain into musical gold.

Perhaps Extraordinary Machine was a little forced, but it did get the wheels turning. Apple began writing and recording her fourth album almost immediately, but to avoid the chaos of the third’s release, she did so in secret. It was produced by her tour drummer Charley Drayton and given to the world in 2012. The title was another poem, shorter than When The Pawn…, and it seems to imply that one is better off being their masochistic selves than trying to conform to some rules for life. The album sounds like Apple curling back into the comfort of her anguish, exploring themes of anxiety, envy and loves lost over hypnotic and beautiful tension. The coyness from Extraordinary Machine remains on tracks “Every Single Night” and “Daredevil,” but so are the experimental jazz rhythms, root-of-the-soul howls and biting cynicism. It’s a dynamic, return-to-force album that shows signs of maturity and late-night lounge moods. It explores exciting production techniques, sampling field recordings of bottle factories on “Jonathan” and screaming school children on “Werewolf,” and it’s nothing less than avant-garde on the frightful push and pull of “Left Alone,” giving genius musical color to the feeling of an overwrought brain trying to keep up with a racing heart. This is Apple in her 30s, cozy with herself and sure of her powers, not needing to be anything else to anyone. Just as the Earth seemed to shudder with insanity, Apple returns with a delightfully-intense album to rattle quarantine cages. Conceived of as far back as 2012, the album was recorded in her Venice Beach home. It’s unique in her catalog for leading with experimental percussion. Most of the beats were sampled by hitting and recording random surfaces and objects in her home with Amy Eileen Wood. The lyrics are frank and straight-forward, though they explore a myriad of topics. Sure, she mines spoiled love affairs, but she also explores stories from her childhood (“Shameika”), the anti-social power of speaking one’s mind (“Under The Table”), the contagious nature of maliciousness (“Relay”), depression and more. The Kavanaugh hearings stirred much resentment and passion in her, bringing back hard memories of her own childhood rape while giving her space to conquer those feelings and lash out in a mix of anger and courage. The songs that explore relationships between women are most exciting. On “Newspaper,” she watches one woman struggle with the same man who once hurt her, growing close to her without really being able to connect.