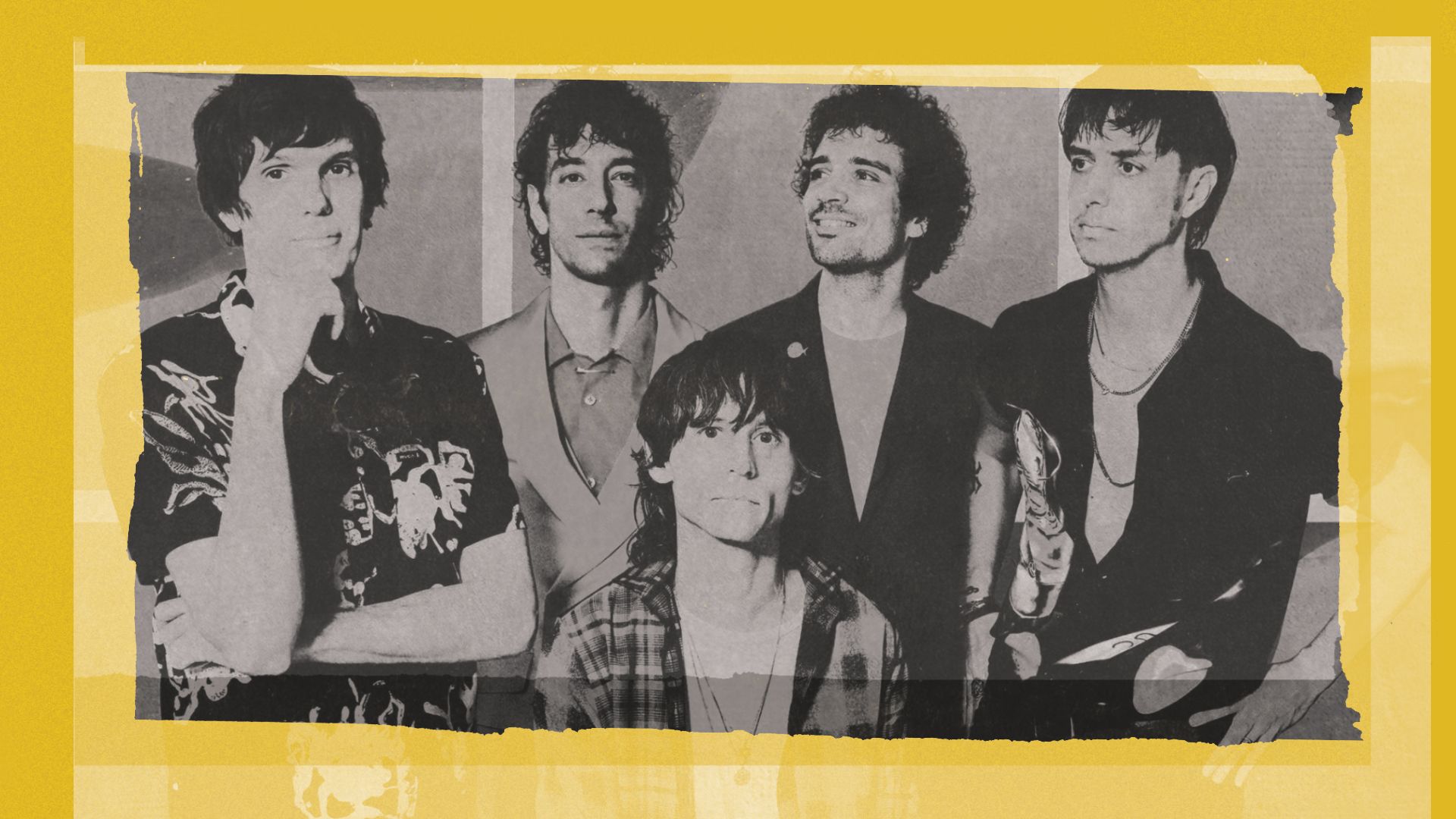 The Strokes first burst onto the consciousness of cool spotters at the start of 2001. I worked for a record label at the time and spent much of my day either in or talking to various independent records stores around the US. A friend at one of these stores gave me The Strokes EP The Modern Age. He sold it to me as a band that was ‘currently huge in England.’ I had been a massive Anglophile since emerging from the womb, so that was enough for me to snap up the three-song disc. I remember I had a convertible rental car (I was in Hollywood) the day I got Age. I walked out into the parking, took the top down and popped in the disc. I had no idea what the band sounded like or what to expect. As I made my way down Sunset Blvd., the droning guitars and modulated vocals literally pinned me to the spot – I was so blown away that I had not moved through almost an entire green light, much to the disgust of the chorus of honking horns and disgruntled drivers behind me.

The songs both referenced the gritty, (still) artist friendly hub of Brooklyn, while clearly leaning into indie godparents like The Cure and The Velvet Underground. The Strokes sounded like the reason I had fallen in love with the alternative scene in the first place; they had a clear sense of geography, message, and style indicative to their specific place and space. At that moment, the biggest selling ‘rock’ record was Limp Bizkit, and arenas were filled with Phish and Dave Matthews fans. Here was a return, an homage – but with a fresh twist – to what it meant to make important music.

It has been almost two full decades since The Modern Age was released, followed by the band’s full-length debut Is This It. On the precipice of the release of their sixth studio album, the appropriately and timely named The New Abnormal, it’s hard to fully comprehend how much the world has changed since that Sunset Boulevard drive; but through it all, The Strokes have managed to sporadically put out albums, with various degrees of commercial and critical success.

The band that would become The Strokes met through various private schools that the members attended. While at the elite Dwight School in Manhattan, Julian Casablancas (lead vocals, songwriter) Nick Valensi (guitar) and Fabrizio Moretti (drums) all jammed together. Next to the mix was Nikolai Fraiture (bass), who Casablancas met at his next school, Lycée Français de New York before getting whisked off at age 13 to a boarding school in Switzerland, where he befriended Albert Hammond Jr. Hammond eventually moved to New York, enrolled in the Tisch School of the Arts at NYU, and moved in with his old pal Casablancas. Casablancas was the connective tissue between all of the former schoolmates, eventually drafting them in to form The Strokes. The band sent a rough demo of their songs to the newly reformed Rough Trade label, who eventually put out the first EP by the band, The Modern Age. Featuring just three songs- ‘The Modern Age,’ ‘Last Nite’ and ‘Barely Legal,’ the recording is raw, loud and incredibly appealing. Record executives agreed, as a competitive bidding war for the band ensued after Age’s release, seeing the group eventually sign to RCA. The three-color (black, red and white) sleeve with a deceptively simplistic swirl somehow perfectly encapsulates the content: the unpolished DIY feel of an album made by an enthusiastic group of young adults in an actual garage. Upon first listen, you, too, wanted to be in their gang.

The band’s debut Is This It is one of those rare things- a piece of work that not only holds up to the hype, but, years and years later, still sounds close to perfect. Tracks like ‘Hard to Explain’ and ‘Take It Or Leave It’ somehow encapsulate the frenetic movement of cross-town club-hopping, dive bar drink specials and sloppy drunken make-out sessions, all delivered with the organic urgency that only youth can provide. Songs like ‘Barely Legal,’ ‘Soma’ and ‘Someday’ now are the clear archetypes for other successful groups who followed, most notably Hot Hot Heat and the Yeah Yeah Yeahs. Similarly, ‘Trying Your Luck’ and ‘Alone, Together’ are obvious predecessors to the pop hits of The Killers and the lighter side of Interpol. Though the release date was impacted by the September 11 tragedy, the magic of Is This It provided a bright spark of energy during a dark, scary time in US history. Even the UK cover art- originally a black and white shot of a nude model in silhouette with a glossy vinyl glove on her ass- was replaced for a vivid turquoise and yellow image of bubble particles on the American version. Both covers work, the original conveying the stark beauty of minimalism while the almost illuminated US sleeve perfectly captures the almost overzealous, bursting forth nature of the album. Though including the same track names and titles as the EP, lyrics and arrangements differ between the two, as the songs were re-recorded for the full length. The US edition also replaces ‘New York City Cops’ with ‘When It Started,’ as the band’s opinion of the law enforcers had changed after seeing their brave actions during the terrorist attacks.

After touring almost non-stop in support of their debut album, The Strokes returned to the studio to begin work on their follow up. With just three months of studio time allotted to record the album, the band later admitted to the end result possibly being rushed. ‘I remember being in the studio on that last day and just staying up 24 hours straight trying to work out all these last little kinks. I think the album would’ve ended up a lot better if we’d had another couple of weeks,’ Valensi told Pitchfork. A first effort to collaborate with Radiohead producer Nigel Godrich was aborted after he clashed with Casablancas. Gordon Raphael, who had worked with the band on their debut LP returned in his place. This may explain why some reviewers saw the new albums as more of an extension than an evolution, with BBC Music noting, ‘They’ve made Is This It part two. It’s more of the same plus extras.’ Of the three singles- ‘Reptilia,’ ‘12:15’ and ‘The End Has No End,’ only the latter offers a glimpse of new ideas, with the former duo indeed sounding as if they could have been included on a deluxe version of the first album.

The third studio LP, like its predecessors, was written almost in its entirety by Casablancas. This led to ever-increasing tension within the band, the ruptures beginning to show in the tracks themselves. Seeming to fulfill one journalist’s ominous prediction that they had ‘nowhere to go but out of style,’ sales and critical reception lagged far behind the enthusiastic reaction enjoyed by the former two albums. The band had originally brought in Raphael to once again pick up the production reins before replacing him with David Kahne, best known for working with artists like Sublime and Paul McCartney. Though it may not have been hailed as a triumphant at its release, singles ‘Juicebox’ shows off a matured, dare I say louder, cleaner version of the band, with relentless throbbing drums, Casablancas vocals schizophrenically trying to keep up. ‘Heart in a Cage’ spotlights a new, almost prog-rock sensibility, while ‘You Only Live Once’ amalgamates the lighter, polished sound of the group with the trademark hooky sing-along, more fit for a smoky club than an amphitheatre in vibe. While Earth may not have yet to be celebrated as the classic of Is This It, the songcraft, lyric writing, and style deserve some serious consideration; the LP should not be tossed out simply as a lack lustre third offering.

A hiatus of five years saw further cracks in the band, as members pursued their own projects, fought various substance abuse issues and generally struggled to collaborate as a unit. While past albums had been made fairly quickly, Angles took over two years, with the band – minus Casablancas – laying down tracks with new producer Joe Chiccarelli (Morrissey, The Shins). Disheartened by the absence of their lead singer and the style Chiccarelli was taking the album, the record was almost entirely scrapped or reworked at Hammond’s home studio with engineer Gus Oberg. The Guardian calls the resulting release, ‘a laboured album that sounded as if it was made by a band who did not want to record it at all.’ Indeed, Valensi later confided that he wouldn’t ‘do the next album’ if the same tactics were used. ‘No way. It was awful– just awful,’ he concluded. As a fan, the album is not horrible; it just does not sparkle or demand to be listened to. Singles ‘Taken for a Fool’ and ‘Under Cover of Darkness’ sound like classic Strokes fodder, vocals upfront and the clanging guitars. However, there is a boredom and formulaic quality, an almost recycled feeling, that does not cause the same excitement found on the band’s previous offerings.

There was a complete press and promotion black out for the band’s fifth RCA LP: no interviews, no tours or appearances. Casablancas now concedes that at the time, the group was not ‘in harmony.’ While this may be true, lead single ‘One Way Trigger’ has a retro 80s feel, the synths and structures more than a bit reminiscent of a-ha’s classic, ‘Take On Me,’ and would not be out of place on a high-energy cardio mix- or on Casablancas’ solo outing, 2011’s Phrazes for the Young. The second single, ‘All The Time,’ once again returns to The Strokes signature guitar heavy grind and is almost interchangeable for any of the songs from Angles. Reviews were mixed, with NME giving Machine four out of five stars and proclaiming the album, ‘sounds like a mixtape the Strokes made for themselves.’ Not everyone was so complimentary, with Rolling Stone accusing the band of not ‘exactly bursting with innovative musical ideas that demand to be let loose.’

The EP – released on Casablancas own indie Cult Records – shows a return of the band to fully conceived songs. Each of the three songs- ‘Drag Queen,’ ‘Oblivious’ and ‘Threat of Joy’ represent one of the titles time references, and features collaborations between band members, with Casablancas, Moretti and Valenso penning the first track while Hammond and the lead singer write the second. Sharing their love for 80s New Wave firmly in their songwriting, this offering in its entirety feels like it could be a missing jewel from the very best of Factory Records. A must purchase.

Featuring what may be the most appropriate and opportune title of all time, the band’s sixth studio album has been four years in the making. At the production helm this time is legendary Rick Rubin, helping to make the band ‘sound like the five coolest people in New York all over again.’ ‘Bad Decisions’ and ‘The Adults Are Talking’ seem to capture all of the good ideas and inspirations the band have individually picked up in the almost two decades together, spinning them into instantly hummable songs. The inclusion of ballads ‘At The Door’ and ‘Ode to the Mets’ continue Casablancas love for the 80s, as they both have essence de early ABBA. Such a diverse assortment of styles within one album does perfectly sum up what Casablancas recently admitted is ‘this wrestling match between doing cool creative things and smart marketing things.’ In a world where the singer concedes, ‘pop music is king over art and quality because it’s all been scientifically worked out,’ it is refreshing to hear a band still willing to experiment and try something unproven.