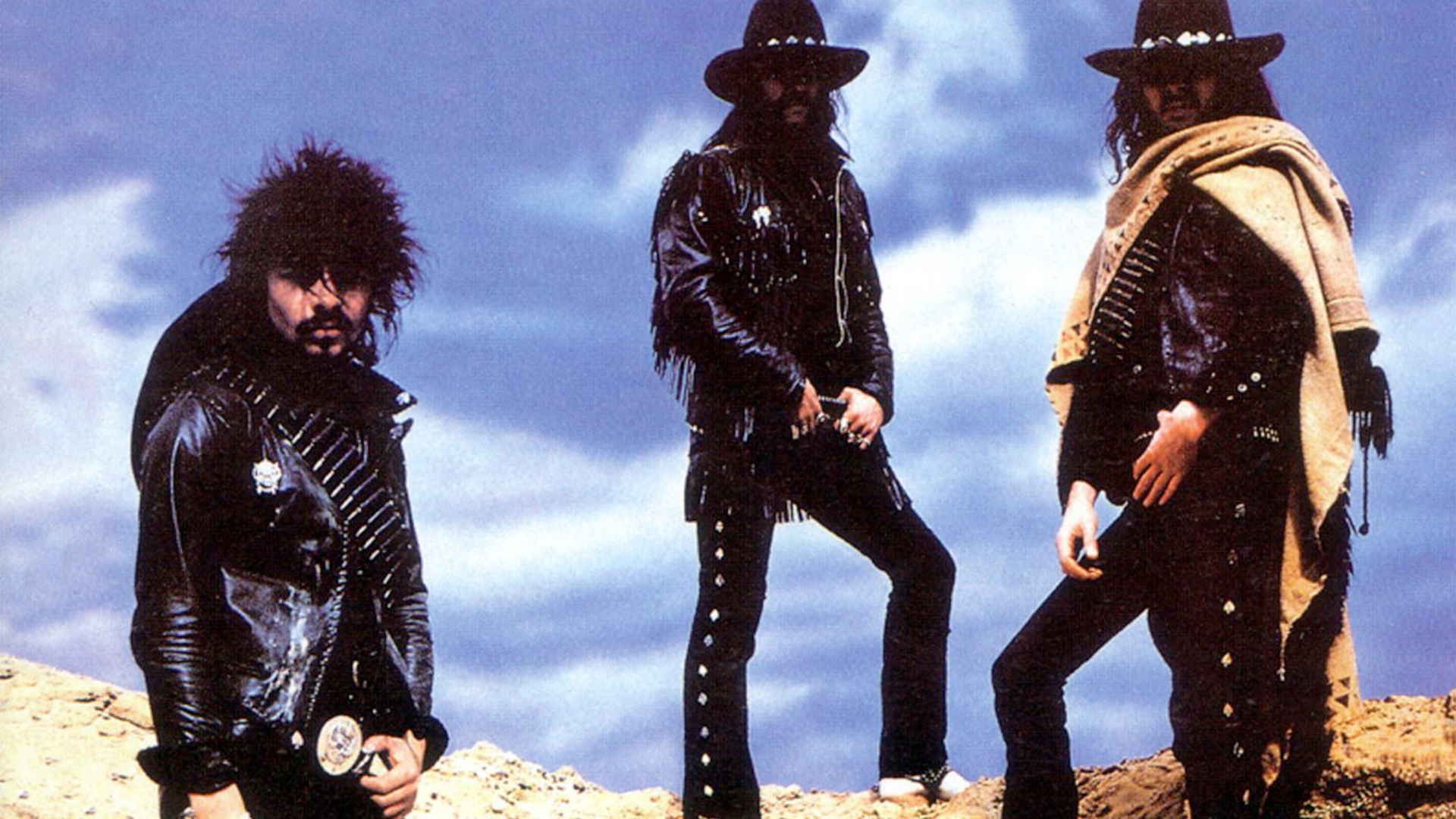 Perennial Motörhead frontman and co-founder Lemmy Kilmister seemed like a living contradiction. He played high-decibel, high-octane music, yet conversations with him were nuanced at a quieter volume. His band spurred the development of thrash metal, but he did not consider his band a metal outfit and disdained mosh pits. He once told me that he preferred jiving, an African-American style of dancing popularized in the 1930s. His band was very influential, but they never sold huge amounts of records. He never seemed to be of his time, but it felt like we always needed him around.

When he, raucous guitarist “Fast” Eddie Clarke, and wild-haired drummer Phil “Philthy Animal” Taylor released Ace of Spades 40 years ago on November 8 – and it just got a massive vinyl box set reissue – they had already been cranking out their signature brand of forceful, fast-paced rock ‘n roll for five years. They combined the riffing energy of heavy metal with the wild abandon of punk music. Their outlaw image and the monstrous Snaggletooth mascot image designed by Joe Petagno lent them a dark mystique, and Lemmy reportedly earned the respect of hardcore British bikers who followed his rules.

The rambunctious trio had had some success in their native England; albums Motörhead, Bomber, and Overkill increasingly charted better, each being certified Silver there for sales of 60,000 units. Ace of Spades, however, would blow the doors open for them, selling over 100,000 units in England and hitting #4 on the UK charts, with the title track hitting #15. It garnered them international attention. They also influenced many budding young metalheads including a then-unknown Lars Ulrich, the future drummer of Metallica, who was inspired to start his own band after euphorically devouring their music. 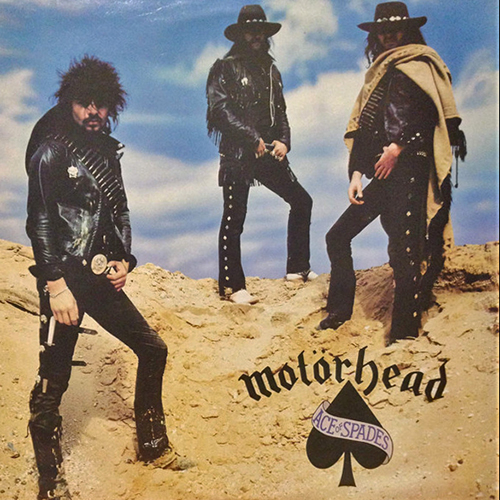 So what set apart Ace of Spades from previous Motörhead releases as well as standing out during the New Wave of British Heavy Metal that was exploding in 1980? Beyond the superior quality of the songs, a big factor was producer Vic “Chairman” Maille who gave them a fuller studio sound while retaining the jagged edges and manic intensity that was so important to their core sound. Kilmister and Taylor recalled in the past how Maille was unafraid to push them to play and be better. They accepted his challenge. He even got Lemmy to sing more.

The band mixed up faster-paced numbers like the title track and “Fire Fire” with snarling mid-tempo rockers such as “Dance” and “Fast and Loose.” Their combination of Clarke’s aggressive and often bluesy swagger with Taylor’s tight grooves and Lemmy’s percolating bass and distinctly raspy vocals produced a sound like no other band. Maille was able to translate their pummeling concert sound into a durable and palatable package to lure new fans in.

The most overtly thrashing song on the album was its last cut, “The Hammer,” which laid down the gauntlet for future headbangers to pick up and race with. The title track of 1979’s Overkill with its double bass drum propulsion could have used this sonic boost. It’s easy to see how young metalheads heard “The Hammer” and wanted to emulate its aggression. Albums released in 1980 by Judas Priest, Iron Maiden, and Angel Witch helped fueled that fire too, while Motörhead’s consistent boisterousness served as a major sonic template for thrash metal.

As Guardian contributor Van Badham recalled upon Lemmy’s death in 2015, the group did not just play rock ‘n’ roll, they defined it. “Everything that is pleasant in life is dangerous,” Lemmy once said. “Have you noticed that?” While the thrash to come metal often wrestled with serious topics like political corruption and nuclear destruction – and Motörhead got more intense later on – the lyrical themes of Ace of Spades boiled down to good old fashioned sex, drugs, and rock ‘n’ roll. Lemmy espoused his love for card gambling (the title track), chronicled the roadie life (“We Are The Road Crew”), dissected cinematic outlaws (“Shoot You In The Back”), and expressed the eternal struggles of the underdog (“Live To Win”). Plus there were the odes to sex: pursuing it (“The Chase Is Better Than The Catch”), getting down and dirty (“Love Me Like A Reptile”), and seeking forbidden fruit (“Jailbait”). That last song would not fly today for a new band.

Motörhead also allied themselves with hard-rocking women. Three months after Ace of Spades came out, the group collaborated with the British quartet Girlschool on the three-song St. Valentine’s Day Massacre EP, followed in May 1982 with the three-song Stand By Your Man EP recorded with Wendy O. Williams and the Plasmatics. In the mid-1990s, Lemmy would also forge a long-term friendship with Nina C. Alice and Jim Voxx of Skew Siskin that occasionally led to live or studio collaborations.

None of Motörhead’s long-term success might have come about had it not been for the breakthrough of Ace of Spades. Media that had ignored them before suddenly took notice, and they played the title track for their third appearance on the highly watched BBC music show Top of the Pops. The group embarked on an extensive tour of Europe and for the first time the U.S., which ran through a majority of 1981. The North American leg lasted a little over two months. The album’s stature has only grown over the decades, and it recently made #408 on Rolling Stone’s 500 Greatest Albums Of All Time list.

After Ace of Spades, Motörhead released the equally aggressive Iron Fist in 1982 (their first to crack the U.S. Top 200 albums) before detouring into a more melodic sound with Another Perfect Day.  That was the album that had marked the departure of Clarke  – he co-founded Fastway whose debut hit #31 in the U.S. – and the one-time enlistment of former Thin Lizzy guitarist Brian “Robbo” Robertson. Contentious perhaps for some fans, that album is actually my favorite Motörhead release.

Like AC/DC, this trio would stick with their signature sound throughout their career even as their band membership morphed over time (they were a quartet between 1984 and 1995), although they would occasionally veer off into other areas.  Their Grammy Award-nominated album 1916, Taylor’s last with the band in 1991, included keyboard, cello, and saxophone in select spots.  They flirted with prog-rock timekeeping on 1998’s Snake Bite Love, and they put out a percussion-free acoustic tune called “Whorehouse Blues” as the closing number to 2004’s Inferno. That album finally won them a Grammy Award for Best Metal Performance for (weirdly) their cover of Metallica’s “Whiplash.” Inferno also featured some shredding axework from Steve Vai on a couple of tracks.

Lemmy asserted that he did not think the title track for Ace of Spades, despite being iconic and their most well-known tune, was better than other songs in their catalog. But it captured people’s attention like never before and opened up a wider audience to them. Despite the massive influence they had on the thrash and speed metal movement of the ’80s, and on various iconic rockers from that genre and beyond, Motörhead never really sold as many albums as one might expect. None of them have been certified gold or platinum by the RIAA in America.

Commercial acceptance was never the point of Motörhead. They lived a fast, wild, and loose lifestyle that irked the mainstream. That single-minded purpose was captured vividly on Ace of Spades.

The one time I had the opportunity to visit Lemmy at his apartment in West Hollywood back in April 2001, he showed me a taped performance of their Wrestlemania appearance and discussed World War II history with me. Then he showed me the diabetes pills he took in the morning and the others for the night, after which his girlfriend offered me a Jack and Coke. I thought, “Dude, correlation?”

Lemmy was no fool. He must have sensed that a life devoted to women, booze, smoking, and speed was bound to catch up to him, as it did when he developed Type 2 diabetes in his fifties. He passed away at age 70 in December 2015 from prostate cancer, cardiac arrhythmia, and congestive heart failure, one month after his old bandmate Phil Taylor succumbed to liver failure. It seemed amazing that the Motörhead frontman had endured so long, especially when one sees so many rock icons dying at younger ages today and without having lived the excessive way he did.

With “Fast” Eddie Clarke passing away from pneumonia in 2018, the classic line-up of the group that recorded Ace of Spades no longer rocks the Earth. For longtime fans, that is a strange thought to contemplate. But Motörhead’s music and attitude persevere through their fans and their extensive discography which includes 22 studio albums. Part of what also defined them was Lemmy’s brutal honesty and the way he embraced his lifestyle. He let it all be shown, warts and all, literally and figuratively.

Many of Motörhead’s followers really connected with the band members and their ethos. “We really had nothing to lose and a lot of our fans could identify with that as they were in the same boat,” Clarke told Jeb Wright of Classic Rock Revisited in 2014. “We never sold out and we rubbed a lot of people up the wrong way, but were honest about it. I miss those times … things were much simpler. I think life is more fun when it is a bit of a struggle.”