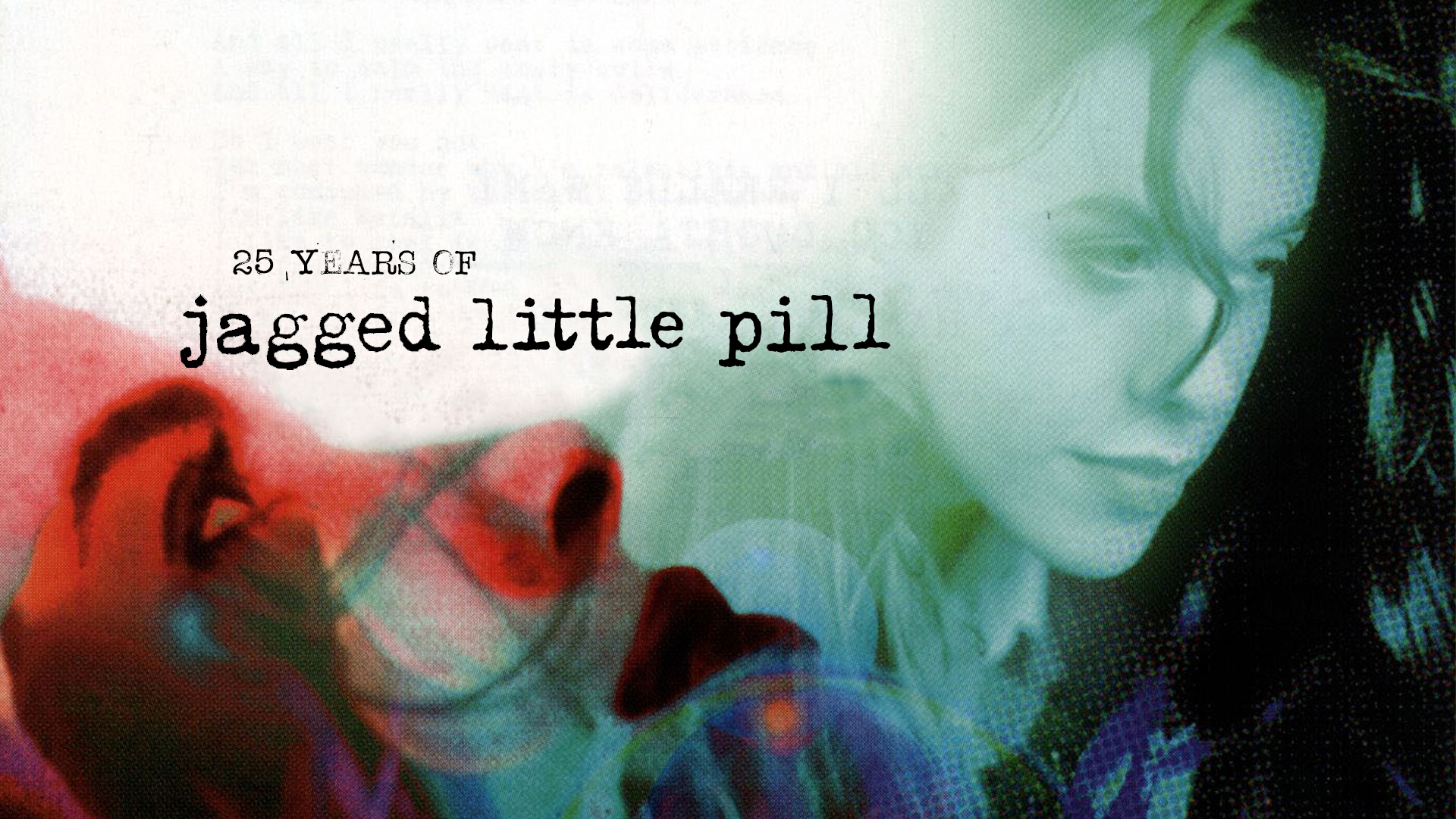 Some artists arrive when they have a fully formed vision of themselves that they are ready to share with the world. Others arrive at a key moment of transition in their lives. When Alanis Morissette began creating the record that would become Jagged Little Pill as she was turning 20, she was trying to figure out who she was as an artist. The resulting album has become one of the biggest selling rock releases of all time. Fans identified their own conflicts within her raw, emotional delivery and honest lyrics, and her songs became essential anthems in their lives.

None of this success came without hard work, perseverance, and soul searching. 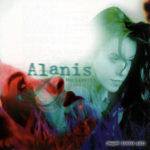 As a teenager, Morissette had released two albums of R&B-influenced dance-pop, Alanis and Now Is The Time, that came out in 1991 and 1992 through MCA Canada. While they proved that she was a good singer, they lacked the character of her later music and have since gone out of print (but you can find them on YouTube). Her debut went platinum in Canada, but after her sophomore effort failed to catch fire as easily — and with the young singer-songwriter balking at the limiting category she was being pushed into — the label dropped her.

That did not dissuade the ambitious artist, who felt that better things were on the horizon. She knew that she had to find the right home for her music and the right producer to understand who she was. But who was she? As she recounted in the liner notes to the Jagged Little Pill 20th anniversary reissue, that quest lasted many months as she sought out the right collaborator to help her coalesce and achieve her own personal vision.

Numerous meetings with producers came and went both in Canada and Los Angeles, then Kurt Denny, who represented her at MCA Publishing, introduced her to producer Glen Ballard, known for his work with pop artists like Curtis Stigers, Wilson Phillips, and Celine Dion. Denny was not sure how the meeting would go, but Ballard and Morissette met and the magic was instantaneous. Despite their 21-year age difference, the two clicked as musical kindred spirits. They wrote their first song that afternoon. “Ironic” was their third song (numerous outtakes from the album sessions emerged on the 20th-anniversary release back in 2015.) It is clear in retrospect that they were both enthusiastically pushing themselves outside of their comfort zone. She wrote the words, they created the music, and she expanded her vocal expressiveness.

The songs for Jagged Little Pill were written in two main periods: March through June of 199, then October 1994 through January 1995 Morissette commuted between Toronto and L.A., enjoying the creative rapport with Ballard and cranking out as many songs as they could. Demos were recorded during that initial period, with the album officially taking shape during the latter. As Morissette has recalled, their songs often took 20 to 40 minutes to write, and she did not labor over her singing.

“I recorded all those vocals at the end of the night, sometimes one take,” Ballard told Holly Gordon of CBC Music in 2015. “‘You Oughta Know,’ one take. Most of ’em, two takes. And it was that part of it, to this day, amazes me more than anything. Because she did not ever, ever get neurotic about vocals. A lot of singers just naturally will be. She just couldn’t be less concerned. She just would go out and sing.”

He added: “So much of it happened just with the two of us, honestly it’s the most intimate record you could make.” Many of the demo vocals, like “You Oughta Know,” survived the original sessions and made it onto the finished album, the recording of which wrapped up in February 1995.

A majority of the music was recorded by just the duo, with Ballard playing guitar and keyboards on numerous songs. Other musicians were brought in on various tracks, including bassist Lance Morrison, organist Benmont Tench, and drummer Matt Laug. Ballard did a lot of programming on Jagged Little Pill, which is one element that really pegs an obvious date for the era in which it was recorded, although the emotional power of the album has proven to be timeless.

Despite their pop pedigrees, Morissette and Ballard were not going for slick production values. Many of these songs were expressing raw emotional wounds, and when the singer contemplated some lyrical changes, he insisted that she not excise anything or edit herself. Shopping for a deal proved to be a daunting task as many suits wanted Morissette to lessen the intensity. That never worked, and the duo stuck to her vision, even if it was a hard sell for an industry not accustomed to supporting such feminist manifestos, particularly from someone so young. And so intense.

Every major label passed on the album, except for Maverick Records, the label founded by Madonna. They released Jagged Little Pill in June 1995.

At the time when Jagged Little Pill emerged, the rock landscape was very male-dominated. While alternative bands often had more female members, the grunge scene was generally a forum for male angst. However, some women were stirring things up. Tori Amos had started her own pushback against the patriarchy with her seminal, piano-driven rock albums Little Earthquakes and Under The Pink. Liz Phair had rebuked the sexism of the Rolling Stones with Exile In Guyville, and Courtney Love and Hole were rattling cages with Live Through This.

Alanis Morissette had an advantage in that she and Ballard knew how to find pop hooks in whatever they worked. Whereas Amos’ poetic lyrics often required a lot of deciphering, Morissette’s were more direct and visceral. (The two would actually team up for a tour in 1999.) Jagged Little Pill found a broader niche that eluded edgier artists like Love and Phair, which is not a criticism of either woman. It’s a big reason why Alanis broke on such a huge scale.

Morissette built on the alternative rock template with pop influences, acoustic over electronic elements, and the use of drum machines and looping that took the music outside of the traditional mold of the rock genre. When it came to playing live, the songs were given a sonic kick in the ass by her band, which at the time included guitarists and backing vocalists Nick Lashley and Jesse Tobias, bassist Chris Chaney, and future Foo Fighters drummer Taylor Hawkins. She proved she could deliver live — and yes, she brought out the harmonica.

In the mid-1990s, the music business still did not see the lucrative potential in many promoting many female artists at the same time, notably in rock music. Garnering radio airplay seemed daunting at first because many stations would not play more than a couple of female artists in rotation at a time. That myopia was reflected by a statement made by Sarah McLachlan during her very successful Fumbling Towards Ecstasy world tour in 1994. She had been advised that taking out female opening acts was not a good idea. She defied that sentiment and prospered.

Morissette was going to prove a lot of people wrong about any preconceptions that they had of her. She never let the suits dilute her music, she led with a confrontational single that was quickly embraced by KROQ in L.A. and WNNX in Atlanta, and she never sexed up her image. It only took weeks for “You Oughta Know” to explode nationwide because its intensity resonated with radio jocks and the general public. And the album was multi-faceted: you could rock out, groove to it, or be contemplative.

The profundity of “You Oughta Know” did not come in the type of anger expressed – countless women had experienced this before and have since – but in the way that Morissette expressed it, and how and she Ballard channeled her focused rage into a snarling, catchy anthem with funky underpinnings thanks to Dave Navarro’s six-string skills and Flea’s bass lines. She wasn’t going the stereotypical singer-songwriter route. The song’s frank sexual language was bold and refreshing for the time.

While Morissette got tagged with the “Angry White Female” trope, it’s unfair to categorize the album as just that. Many of the songs were anthems of empowerment, self-discovery, and questioning patriarchal assumptions of women. That media tag is something that was inevitable given the fact that she was breaking new ground and some people were not ready for it.

The core of the album is really about making one’s way through the world, navigating through complicated emotions, and understanding one’s own complexity. “Right Through You” took on sexist record industry handlers who misunderstood their role. While “You Oughta Know” represented vitriol-fueled catharsis, “Head Over Feet” (harmonica solo included) embraced falling in love with someone worthwhile. “You Learn” and “Ironic” grappled with the inevitable monkey wrenches that life will throw at you and learning to push ahead in spite of bumps in the road. On “Forgiven,” she dealt with her Catholic upbringing.

“I think, in general, the common denominator through the whole record is really just me unwittingly giving myself permission to be human,” Morissette told Chloe Hubbard of The Independent in 2020. “I’ve always been terrified in real human being relationships, humans terrify me.”

One loved song that got understandable criticism was “Ironic” for the fact that many of the lyrics in the song did not actually exemplify the title. Funnily enough, when Jagged Little Pill became a hit musical on Broadway in 2019, that very issue was riffed on in the show. Alanis was in on the joke and embraced it.

Once Jagged Little Pill became a hit, she was omnipresent in the public consciousness from mid-1995 through 1996 and she toured constantly, barely catching a break between cities, countries, even continents. By the end, she definitely felt burnt out. But she had conquered the music world and would influence many women to come.

While it is her best-selling release, with over 33 million copies sold worldwide, is Jagged Little Pill the best Alanis Morissette album? Sales and nostalgia scream yes, but she has also produced a lot of memorable music since, and her vocal style and lyrical content have matured. One could argue that Under Rug Swept (2002) and Flavors Of Entanglement (2008) are worthy contenders while occupying a separate sonic space.

Morissette has expressed almost no regrets about Jagged Little Pill and its creation, with the exception of the malapropist lyrics to “Ironic” and the sentiments expressed in “Not The Doctor” in which she feels she was dismissive of a partner’s problems.

“I wrote that when I hadn’t even been in a long-term committed relationship, let alone a marriage,” Morissette explained in her new Independent interview. “At one point I was hyper autonomous, thinking that was the way, I’ll just do this all myself, I don’t need anybody, and then now having been married 10 years I realize that there’s some lyrics in that song that I would update. As in, I’m actually participating in your healing, I’m not just sitting over here going, ‘Hey, you’re on your own, call me when you’re done!’”

While Jagged Little Pill has been transformed into a successful musical written by Oscar-winner Diablo Cody, a new studio album, Such Pretty Forks in the Road — her first in 8 years — is due out mid-summer and will serve up more soul-baring and introspective lyrics.

Looking back, Morissette turning the music world on its head at that age is a pretty staggering accomplishment. Jagged Little Pill established a career that has endured and evolved since that time, and Alanis is still proving that she has more facets of herself to express and explore.