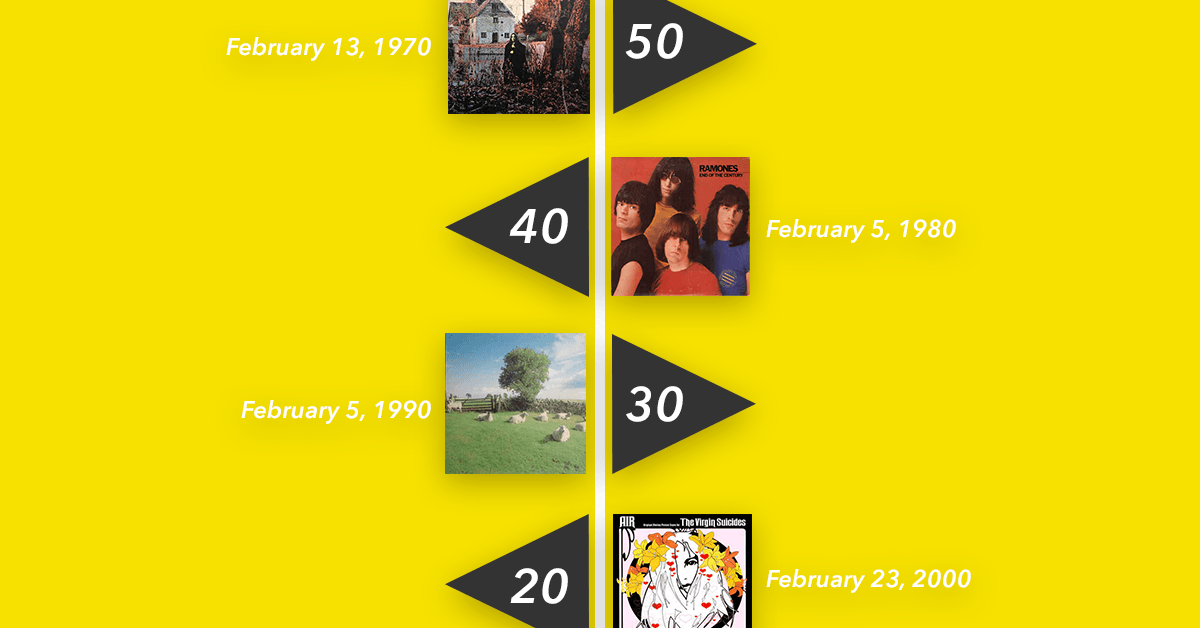 According to the rules of resale, anything that is older than 20 years but less than 100 years is considered vintage. Who made these rules you ask? We have no clue, but we’re here to follow them. Below are some of the biggest vintage album anniversaries in February 2020, starting with 20 years and working in 10-year increments backward to 1970.

Did we miss some album anniversaries? Yes, definitely. We selected a few from each year primarily based on Collection totals but also included some notables that aren’t in many Collections when applicable. Oh, and no compilations nor live albums. It’s not perfect, so tell us which ones should be here in the comments. Wu-Tang Clan member Ghostface Killah’s second album. Solid RZA production throughout. Inspired by a trip they took to Africa. It debuted at number seven on the Billboard 200 and was certified Gold a month after the release date. The original vinyl pressing is relatively rare. One of the most wanted albums released in February 2000. It was nominated for a Grammy in the Best Alternative Music category. Only pressed on vinyl in 2000, which makes copies on that format phenomenally rare and expensive. Yo La Tengo – And Then Nothing Turned Itself Inside Out

The first Yo La Tengo album to make it to the Billboard 200 chart. Very well received, And Then Nothing Turned Itself Inside Out one has landed on a ton of “Best Albums of the 2000s” lists. There is a sold audiophile first pressing too. Yo La Tengo is known for their fantastic covers and they don’t disappoint with an astral rendition of “You Can Have It All.” Recorded in Nashville, TN, the liner notes read, “When in Nashville, visit Prince’s Hot Chicken Shack,” and we couldn’t agree more. One of the best soundtracks of the 2000s. Dreamy and moving, it is a perfect complement to Sofia Coppola’s debut film. An impressive box set commemorated the 15th anniversary of the film in 2015. Not the best work from AC/DC, but it is the 2nd most collected in this list of albums from February 2000. It was AC/DC’s 13th studio album. The first pressing, released in 2000, appreciated in value nicely. Oasis – Standing on the Shoulder of Giants

A tumultuous part of Oasis’s history, three band members left while the album was still in production. Noel Gallagher eventually said he regretted releasing the album, as his transition from illicit to prescribed drugs interfered with his writing. Nonetheless, it charted well. Another example of when having the first vinyl pressing pays big. Another relative flop from a well-known band, Machina/The Machines of God was the fifth studio album and second lowest-selling release by The Smashing Pumpkins. Drummer Jimmy Chamberlin made a well-publicized return and bassist D’arcy Wretzky unexpectedly left the group during production. Billy Corgan later admitted, “I ended up in a broken band with a half-ass enthusiasm towards finishing a project already started,” so you can see why this was perhaps not their strongest performance. There are some bright spots on the album, and it has never been repressed, so copies of the first pressing with a 24-page art booklet regularly sell for more than $150. The KLF – Chill Out

From the group that once burnt a million quid, Chill Out is an unique ambient album that interweaves natural and recorded sounds with cohesive instrumentation. Only officially pressed once on vinyl. Debut studio album from Primus. “John The Fisherman” and “Too Many Puppies” are standout tracks. This album is a great indicator of the grunge that would infiltrate much of 90s rock. Stay away from the 2002 Prawn Song reissue, it has received a slew of negative reviews. Early CBGB punk group The Cramps dropped their fourth studio album, Stay Sick!, in February 1990. Punk rock meets rockabilly, full of surreal lyrics. We miss them for how classy they were, and so do you (or maybe not.) Widely distributed and easy to find. Ranked number one on the Billboard 200 for more than five months, largely due to “U Can’t Touch This.” First hip-hop album to be certified diamond by the RIAA with over 10 million sales and remains one of the best-selling hip-hop albums ever released. Exemplary death metal album by one of the pioneers of the genre. More melodic and societally-themed than previous albums. A lot of turmoil around this album, with multiple members coming and going around production and release. Both the first-pressing and the 2014 box set are rare collectors items. This album just about swept the ARIA (Australian Recording Industry Association) awards in 1991. A well-reviewed album from this Aussie band. Ramones – End of the Century

The first Ramones album produced by Phil Spector, it managed to become the highest charting album for the band. There was reported conflict between the Ramones and Spector, driven by Spector’s perfectionism, but by reading Spector’s biography, he most likely doesn’t remember a thing about this whole ordeal. The album cost about 20X more than their previous one, Road to Ruin. The track “Rapper’s Delight” was the first rap single to become a Top 40 hit on the Billboard Hot 100 and has been sampled hundreds of times, including by Biggie Smalls, Snoop Dogg, and De La Soul. In an insane turn of the events, we can also “thank” The Sugarhill Gang for the chorus of “Aserejé” by Las Ketchup. But don’t blame them too much, they don’t deserve it. One of Elvis Costello’s best albums. They fit 10 songs on each side of the original pressing, a highly unusual move as it could cause “groove-cramming.” Highly-influential debut album from this early synth-pop group. Interesting design with the inner-sleeve visible through the cover and a few different colored sleeve-variants released in the first batch. Since you started singing it in your head as soon as you saw this record, no, “Enola Gay” is not on this one, sorry. Bob Seger & the Silver Bullet Band – Against the Wind

The album that finally knocked The Wall off of the Top LPs chart. The cover art hasn’t aged that well. Has the music? Highly debatable. It’s pretty unusual to think that between this record and Toy Story there’s only one degree of separation. Indeed, that Newman is Randy Newman and he composed all the songs on Nilsson Sings Newman. If you’re as madly in love with that bright cover as we are, you might want to know that Dean Torrence was the artist behind it. As usual, pressings with an obi strip are highly-desired collectors’ items. Heavy-hitting soundtrack to Michelangelo Antonioni’s movie “Zabriskie Point.” Contains tracks by Pink Floyd, The Kaleidoscope, The Grateful Dead and more. Never a bad time to recommend the movie as well, you’ve never seen the Mojave Desert the way Antonioni filmed it (NSFW though). The debut studio album from Black Sabbath, recorded in just one session. Original pressings with an erroneous copyright warning, which more than 2,000 Discogs users have in their Collection, sell for a median price of $322. Debut album by the American funk legends. A key link between 1960s soul and 1970s funk. Written and produced entirely by Van Morrison, Moondance was a phenomenal critical and commercial success. Surprisingly enough, his previous and equally revered album, Astral Weeks, was a commercial failure.