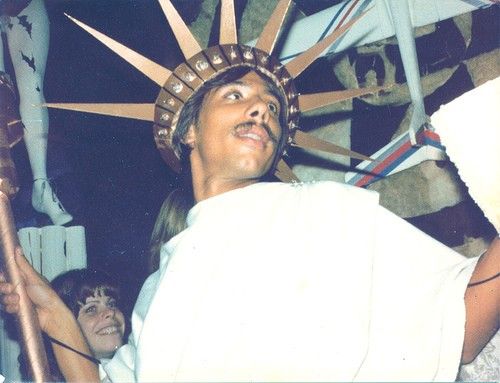 This New Year’s Eve, Discogs supports The Very Last Ultimate Disco Extravaganza, and a collection of fantastic adventures it will surely be. Collecting some of the most experienced and respected individuals in the world of disco dating back to the early 70’s, New York City will be the lucky holding place of this very special one-off celebration of dance music, DJs, and singers.

Included on the bill are Rochelle Fleming, Melba Moore, D.C. LaRue, and headliner Nicky Siano, whose record spinning dates back 40 years, and features residencies at such luminary clubs as Studio 54 during its heyday of the blurry-eyed disco 70’s, and into the synth-poppy 80’s. His history is vast, and for the uninitiated disco dabbler, his rich experience as an entertainer may be too much to grasp in one sitting. Not to fear, as we recently sat down with the Brooklyn-born spinner to touch on some of his past experiences, and what we can expect at the New Year’s Eve party!

Can you remember the first record you fell in love with?

The first record I was obsessed in love with was Laura Nyro‘s “Eli and The Thirteenth Confession“. The first dance record I could not sleep until I owned was “Rain” by Dorothy Morrison.

What was it about that record that touched you?

The excitement, especially after the last break down, into the final chorus.

How did you fall into DJing in the beginning?

There were maybe four clubs when I started, and I was very lucky to go to the best of them early on. I was just 15 years old when a friend of my brother’s took me to The Loft, David Mancuso‘s home which he opened for parties every Saturday night. When I experienced his party, where he controlled every aspect of the room from the DJ booth, each light, and even the air conditioning, I was fascinated by the coordination of modalities, all to enhance the dance experience. The integration and design is what fascinated me, that’s why from day one I wanted to own my own club.

Can you take us through the early period of your DJing and how it evolved?

When I started DJing, many clubs did not have mixers, or cueing systems — no one was slip cueing! So I helped sound men like Alex Rosner develop the first cross over. I helped with the design of the original Bozak mixer, and I was a part of a group that Technics approached for the direct drive turn-tables. I was the first person who started beat matching, and slip cueing. I built the first bass horns. David designed the first tweeter arrays.

What other DJ’s inspired you to become a DJ?

There were only four DJs who were actually DJs when I started playing, so David Mancuso, Michael Capella and David Rodriguez inspired me, but we all needed to find our own way.

You’re known for owning The Gallery, which most books on the time agree was the first disco. You also DJed at Studio 54 — how were those two experiences different?

The Gallery was an underground environment where I developed ideas for everything that came after. Studio 54 was the club that came after. Steve Rubell, owner of Studio 54, and I became friends when he opened his first club, the Enchanted Gardens. After that, Steve came to the Gallery every Saturday night, the only night we were open for a while. He sat under the DJ booth and took notes basically, then there was Studio 54, which looked just like the Gallery scaled up.

Can you explain how the vibe was different at Studio 54 as opposed to other NYC clubs?

The vibe in NY per say, was people going to work, people designing fashion, people going about their business, on Broadway or wherever. Studio 54 opened at 10 pm and stayed open all night. This was a very different group of people — the people who worked in and around Studio 54 could not get into the club, which was a door policy I did not agree with AT ALL.

Can you tell us about your own productions?

I have about 25 productions and mixes out there. One of the great things about Discogs was I got a chance to buy many of my old records which I no longer had copies of, like “Mean Season” by 8th Ave. I wrote, produced and mixed that record. I believe the most important record I did was “Kiss Me Again” for Sire Records. I discovered Arthur Russell and taught him about the dance music industry, and I produced my first record which was the first record produced by a DJ! Mixing was a regular thing for DJ’s but no one had produced until “Kiss Me Again” by Dinosaur.

Are there aspects of music production that you prefer over DJing?

NO. Having a live audience in front of you provides a connection with people that producing has no way of topping.

At the end of the day, what is it about DJing that you love the most?

The music. If I didn’t love the music, I don’t think I would have been successful. The passion I have for music is built in, I am a fan of any good music — even Justin Bieber when he does something good, and his latest album is GOOD…..I love Adele, and Ed Sheeran, he is my favorite lately.

What have you been up to lately?

I play all over the world. I do a weekly podcast. I do very select parties in New York, like the New Year’s Eve Event. I am involved in every aspect, attention to minutiae is what makes something great, instead of good.

How often do you use Discogs? What are your favorite features?

I’ve been using Discogs from the moment I heard about you, probably four years. My favorite feature is the availability, there was only one record I couldn’t find on the web site, and I have been using it three to five times a week lately, buying three to eight records a day.

What do you think of the recent vinyl explosion?

If the record companies were run by intelligent MUSIC people…for instance, look at how Clive Davis runs J Records as opposed to other CEO’s. He is a music person, others are bean counters. One makes decisions out of knowing the best road from experience, the other just looks at numbers. Now one makes things happen, the other follows trends — so Clive makes the trends, others follow. Record companies could have made a big deal out of how much better vinyl and CDs sound than MP3s a long time ago, and should have. But they sat back, and look what happened. Vinyl SOUNDS BETTER… and I will play all vinyl on New Year’s Eve!

What can audiences expect at the New Year’s show?

New Year’s Eve is being coordinated by a group of dedicated people who believe that they could give a party that people remember all their lives. I want to do something that echoes the excitement of years passed, and it will. The night will be filled with “OH MY GOD” moments.

You took a break from music altogether during the 80’s — what was the main impetus for this decision?

Getting Sober! I had to get off drugs or I would have died. Nature interceded and led me to work with people with AIDS for 10 years. That work was hard, but so important — I felt as if I was really making a difference, every day.

It’s strange, because back then I played for the young trendy crowd, and today, I PLAY FOR THE SAME CROWD…..is this a joke?? It seems like there is a strong movement in the young trendy crowd to real music. By that I mean, music with lyrics and instruments instead of machines for everything. My parties are packed with the new trendy kids, and an old crowd who were young like me when they came out in the late 70’s.

Can you talk about some of your experiences with other big-name DJs? For instance, you knew Larry Levan and Frankie Knuckles as they started out.

I taught them how to play. I was there mentor, their inspiration, their muse.

How did your relationship with these individuals begin?

When the Gallery opened, it was THE place. I don’t mean it was one of ten places, it was the ONLY place. For about three years of the seven-year run, it was the only hot spot in Manhattan, so Frankie and Larry, who were club kids, found their way to the very first party, and they introduced themselves. I saw the look in their eyes, and I hired them as my decorators on the spot.

Looking back on your long career, what advice would you give aspiring DJs?

Don’t over think what you’re doing…the first thought is inspiration. All the rest is EGO.

All images courtesy of Nicky Siano.

Tickets for The Last New Year’s Eve Disco Extravaganza are available via Nicky Siano’s website and are $75 when ordered in advance. But… you and three of your friends have a chance to win a spot on the guest list for the New Year’s Eve of a lifetime! Just leave a message below and let us know what your favorite Disco release is! From all entries below and on our social media channels one winner will randomly be selected. The winner will be announced on December 23rd and will get free entry for four to the event!