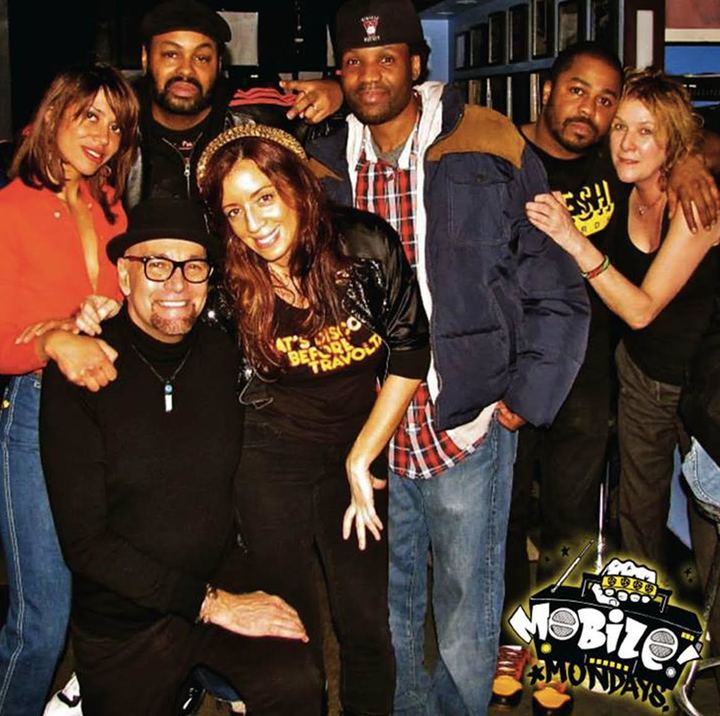 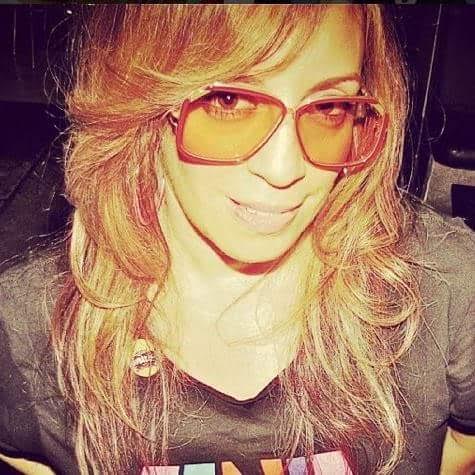 Discogs has teamed up with the Mobile Mondays! team to present “Mobile Mondays! Large Pro & Diamond D’s Bday Throwdown with Surprise Guests” on the 4th of April 2016.

Sharing the love for vinyl, Mobile Mondays! is on a mission to ‘Keep real music alive, celebrate the artistry of the DJ & bring back the true vibe & soul of New York City’.(Continuing our efforts with Mobile Mondays this month,) I had the honor of interviewing Rebecca Lynn, an essential key to keeping the MM party going strong. Read on more below!

What is it like being involved with Mobile Mondays? How did you get to joining up with the crew?

My friend Operator Emz started the party & thats how I got involved.  It started as a hobby & a place for friends to get together & play their favorite records. Hearing the MM DJ’s play all this great music, really affected me & I missed classic NYC, the city that I grew up in.  I realized early on that this party was very special. The MM mission is to save the music, preserve dj culture & bring back the vibe & soul of NYC.  Its pretty incredible that you can hear every genre of music in MM in a night.  We are Funk & Soul, Disco, House, Rhythm & Blues, Pop, New Wave, 80’s, Freestyle, 90’s dance, Hip Hop & anything classic & danceable on 45 RPM Singles

I started as a host/promoter & 5 years later, I’m the Brand Manager,  involved in every aspect from event planning to publicity, etc.  I tell people the only thing I don’t do is DJ. I have so much respect for real DJs & real DJ culture & I am honored to be apart of MM.  The past few years has been a true musical adventure.  I have met & worked with people that I would never have believed. The MM Resident DJs are such great DJs, huge vinyl collectors & some of the best people I have ever worked with. The passion we all share for music makes MM magical.  We have had some unbelievable moments over the years & I have been involved in some incredible collaborations that seemed like a fantasy, i.e.  The MM Summerstage Salsoul Reunion in 2014,  & MM & Jody Watley & Shalamar Reloaded at Lincoln Center 2015.

What’s the scene like in NYC at the moment?

The scene in NYC is not the NYC that I grew up in, and it’s kind of strange.  There a few good parties that play classic music & real dance music but there really isn’t a real club scene like back in the days. Brooklyn, that’s a whole other story. What happened in NYC in the 70’s with the birth of disco & nightlife culture is happening in Brooklyn with new spots & loft parties opening all the time.  It’s really unlimited in Brooklyn but dying in NYC. We are one of the last classic NYC parties in New York City, which I have to say is pretty outrageous, but that’s why we do the weekly Mobile Mondays! in NYC, every Monday at The Bowery Electric 327 Bowery at 2nd St in the East Village.

Do you feel the overall resurgence in vinyl has influenced the growth of these types of DJ nights or would you say that it’s happened independently?

Probably, yes.  It’s funny ’cause Emz started MM 5 years ago because he had a huge 45 collection & wanted to play his records with his friends.  I don’t think we ever thought that vinyl was going to make a huge comeback, except for our Disco Deejay Joey Carvello, he has been screaming a vinyl comeback for years. We were one of the first 45 parties & have really inspired many more 45 parties & vinyl parties.

Are there any lesser known tracks that have become favorites in your scene that you’d like to share?

Every MM DJ plays a certain song that when I hear it anywhere I always think of a particular MM DJ.   Our party is really going back to an era when DJ’s dug a little deeper & broke records.  These songs remind me of each of them:

Operator Emz – Talking Heads – Once In A Lifetime

How did you get started working in the scene in NY? Do you feel it’s harder or easier to get involved now than it was, say 10, 20 or 30 years ago?

I’m a Native New Yorker, grew up in the Bronx & started clubbing in NYC as a teenager in the late 80’s. The late 80’s & early 90’s were pretty incredible.  I never worked in the scene but was always out & obsessed with the music. I had a career in fashion for 15 years and started working in the scene 5 years ago.  I don’t think it’s ever easy.  Nothing in life is easy but if you have enough passion, you just make things happen & keep striving every day.

7″ events are really special & very niche.  The MM DJs are all serious collectors, some collecting for over 40 years, and take great pride in their collections.  Our crowd is a big 45 collector crowd.  People who are hard core collectors come to our party to see who is playing what & it’s fun to see grown adults acting like kids over records.  Most DJs who are playing 45s are playing rare, hard to find records and those records are harder to find than 12 inches.  We do some nights at Mobile Mondays! that are all formats & those nights are really fun, we can hear long dance remixes & a lot of great music was never released on a 45.

Are there any exciting events on the horizon?

We are very excited about our night coming up on 4/4  Discogs Presents Mobile Mondays! Large Pro & Diamond D Bday Throwdown.  Discogs has been such a great partner & we are releasing a Limited Edition Discogs/Mobile Mondays! tee.  Summer 2016 is right around the corner and summer will be incredible.  It’s called  “Mobile Mondays! Outdoors”:  In addition to our weekly Monday at Bowery Electric, I am working with some Museums & Cultural Institutions on outdoor dance parties, block parties, silent discos & bringing the Mobile Mondays! all 45’s classic sound & vibe all over NYC’s 5 Boroughs. #preservetheculture 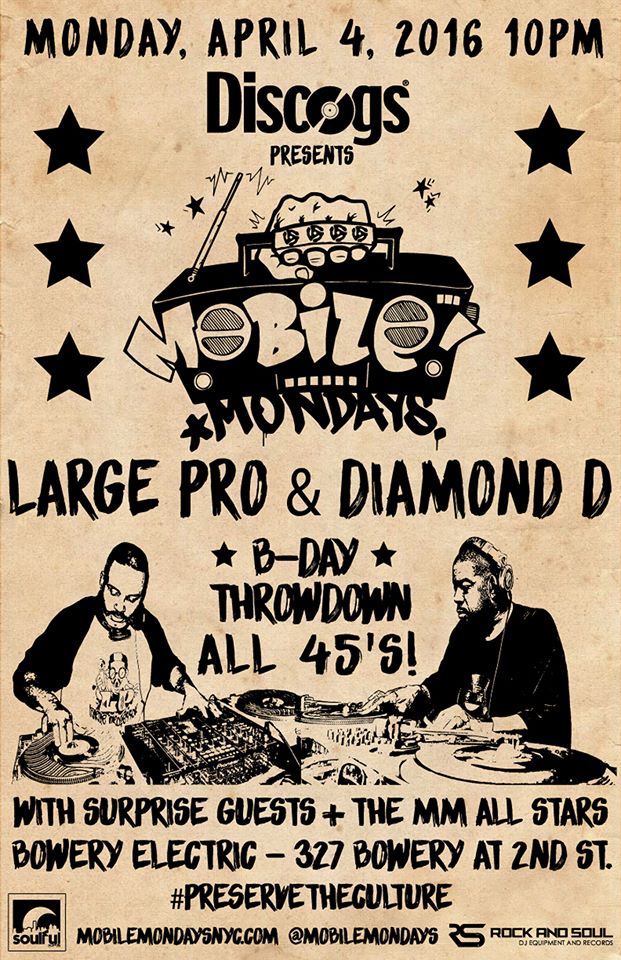