It’s no secret that Wolfgang Voigt has become one of the most revered names in electronic music from the past 25 years.  Under his many guises, Voigt has treated us to house, electro, techno, and even polka-influenced takes on electronic music variations.  Voigt’s most esteemed and fabled project, without a doubt, would be his Gas project, started back in 1995 on the “Modern” EP, released on Profan, later to become Voigt’s own Kompakt label.  What transpired from there was a series of four intensely personal musical journeys from Voigt in a time where most were side-stepping the subtleties of ambient music for more popular flavors of the day, such as big beat and acid jazz.  While Voigt still explored those genres with his typical artistic fervor among his many pseudonyms, he remained curiously focused on his Gas project.

Mysteriously and steadily, Voigt released four albums and a 12” on the now defunct Mille Plateaux label to very little fanfare — these are releases that easily passed most of us by at the time.  What has transpired over the past 15-plus years is something of legend as these releases became harder and harder to find, causing bits of hysteria in the electronic music community, and more than a few dollars being exchanged for the excitement of their discoveries.  If you check the average sale amount of these releases right here on Discogs, you will see that individuals are willing to part with large sums of money in order to experience these rarities in their original vinyl formats.  More important than simple financial numbers, however, is the vast influence it has cast over contemporary electronic artists such as The Orb, and Tim Hecker, just to name a few.  Quite simply, masses of people have been more than keen to catch up on lost time, yet a bit frustrated in knowing that being part of such a vast and rich musical history comes at a price.

Until now.  The good people at Kompakt have seen fit to release a massive 10-record box set today, documenting Voigt’s original vision, while updating the experience through a lavish book and full, never-before-released, unedited versions.   Not all tracks have been altered, and most of the extensions are so subtle you wouldn’t be able to tell the difference if you had only heard the originals a few times.  Having listened to the originals for the past 15-plus years, I can report that the most audible differences reside on the “Zauberberg” album, with several tracks extending beyond their original form.  These have not been re-edited for this box set, but rather presented in their original unedited versions.  Having had the past month to explore these newly-released and unedited versions, it is safe to say that these tracks only pull the listener in deeper, and offer an exciting new flavor to music that already contains indescribable emotional depth.  Accompanying the box set is a book of images, completing the inner vision that Voigt tried to evoke then, and updating them for audiences now.

Voigt has remained tight-lipped over the years about the Gas project.  He has preferred to remain quiet about the experience in favor of letting listeners conjure their own visions.  I was, however, able to chat briefly with him about the Gas project, the box set, and why it was important to present it again, to new and old audiences alike. 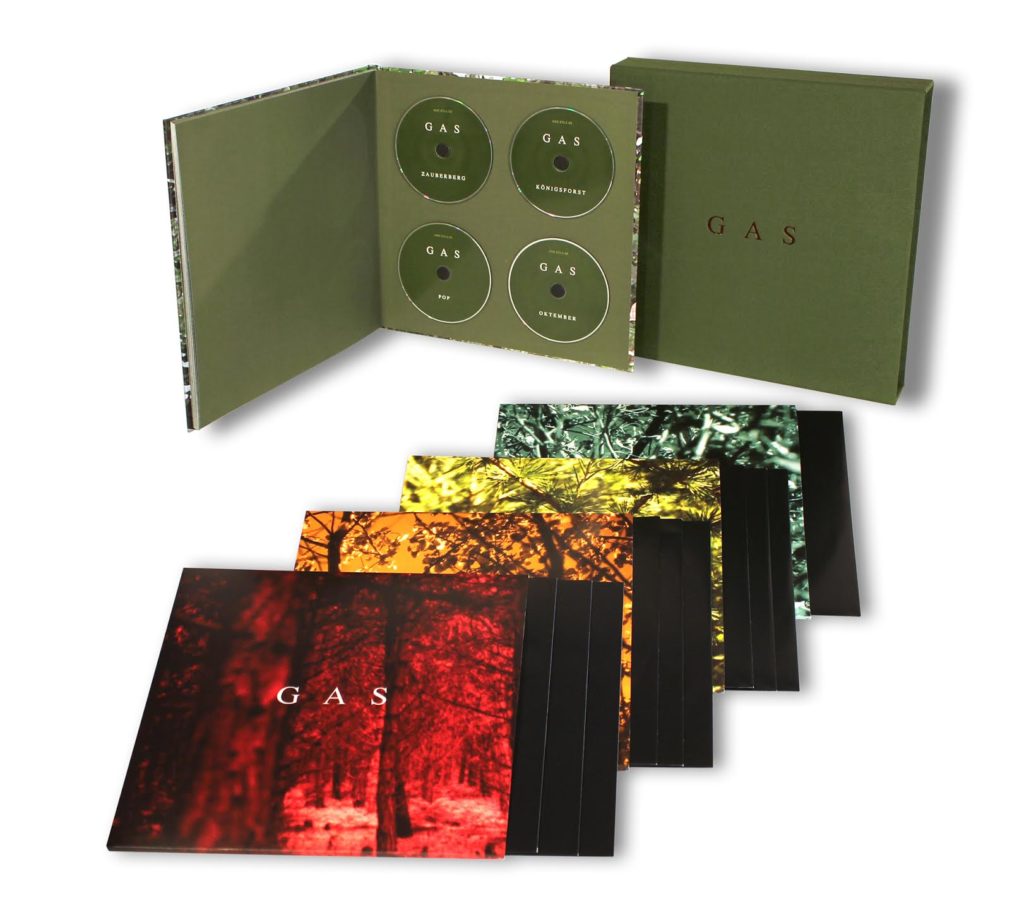 As you look back upon the GAS project, are you surprised to see so much interest with the records?

In these times of fast moving culture, in a way I am surprised. But I also learned that GAS has become kind of a timeless issue.

Did you originally plan on releasing a string of albums upon recording the first album?

Not from the very beginning, because I made so many different things and projects at this time.

Why did you choose to not repress the first GAS EP and album?

Because the first GAS album represents a different artistic and musical style and approach.

Can you explain the theme you wanted to achieve with the second, third, and fourth albums, as well as the “Oktember” single?

Since the 80s, I have been drawn into certain artistic visions, in which electronic music, classical music, folkloristic brass music, and finally the spirit of the German romanticism, Brothers Grimm and the myths of the dark forest would collide with each other. I started to do some experiments in this direction, and then decided to release the album “Zauberberg” under the name of GAS in 1996, so to say as a first result of my studies.

Considering all of the many pseudonyms you have used in your career, what is it about GAS that you feel touches so many people?  What does GAS mean to you?

It has this really strong intensity to it, but there is also a very intimate spirit that is inherent to the whole project. A certain magic which is hard to explain; something invisible, something between the lines. GAS draws you into this very deep and dense atmosphere, which causes a huge fascination from a lot of people far beyond the world of techno music. GAS actually means a lot to me, because it’s one of my most personal projects. For me as an artist the most satisfying thing is when I can reach the maximum effect with a minimum of explanation.

What is the main impetus to re-press these recordings?  Did the very high Discogs prices influence you in any way?

Of course we noticed how sought after the original records became due to the fact that they haven’t been repressed for a very long time. The reputation and status of those records became absolutely timeless. So we felt it was about time to do something special with this legacy, to give it a worthy frame. The 20th anniversary of “Zauberberg” then offered us the right opportunity for a big jubilee release.

What versions can we expect to hear?  The press release states “unreleased edits” — does this mean that the tracks will be presented in their full, unedited form? Is there a limitation to the box set? If so, how many are being pressed?

The term “unreleased edits” means the original versions of a few tracks have been shorter (due to fade outs f.ex.) or they have been only available on the CD or only on the vinyl versions. Now all tracks are available in maximum length and best sound quality, both on vinyl and CD. And yes, the GAS BOX is limited. 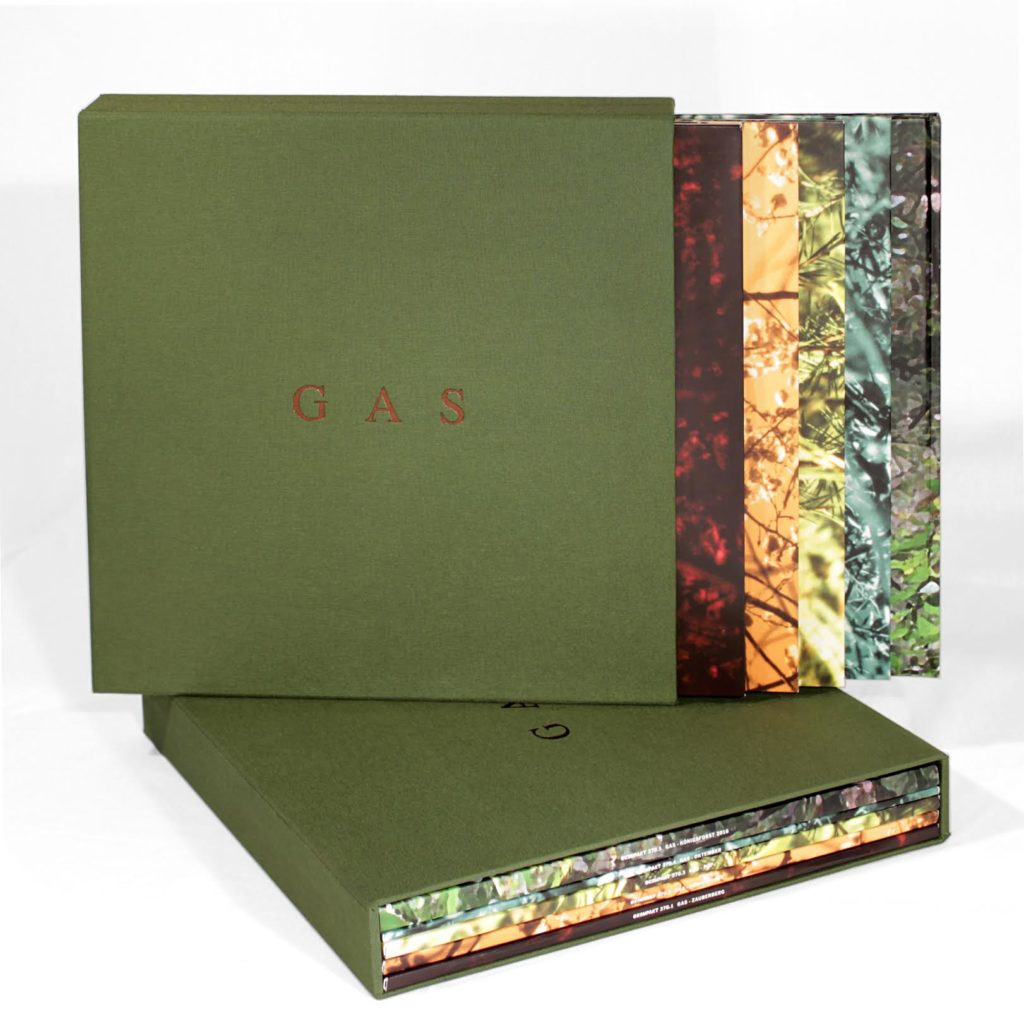 Can you talk about the artwork’s concept, and what will be included in the book with the box set?  The artwork certainly puts the listener in a certain mood before even hearing the music!

I hope that this is still the case! The original artwork is based on photographs I took in the forests back in the 90s.  They refer to certain visions and fantasies of my childhood and youth. The cover artwork of the repressed records in the box is more or less original. But there is a new art book included now, which presents the current view, seen through my timeless Pop-Acid-Art glasses, on the Königsforst forest of today. The book contains a new series of photos, taken 20 years later than the originals.

With the exception of a remix you did for The Field a few years back,  you haven’t recorded anything under the GAS name for over 15 years — do you plan on recording more music under the GAS moniker?  Will you be playing any live dates in conjunction with the box set release?

Yes. While the box shows the history of GAS so far, it also makes way for new material and a new live show to be expected for next year. Just recently I made a GAS remix for Robyn’s track “Who Do You Love”, and then had the great honor to remix the whole album “Kubrick” by british band Soulsavers as well.

What kind of feelings do you have when you see that your GAS output is so coveted by buyers?

It makes me proud and happy that the project is still so respected and requested. Actually since we announced the reissues, it seems like the story continues… 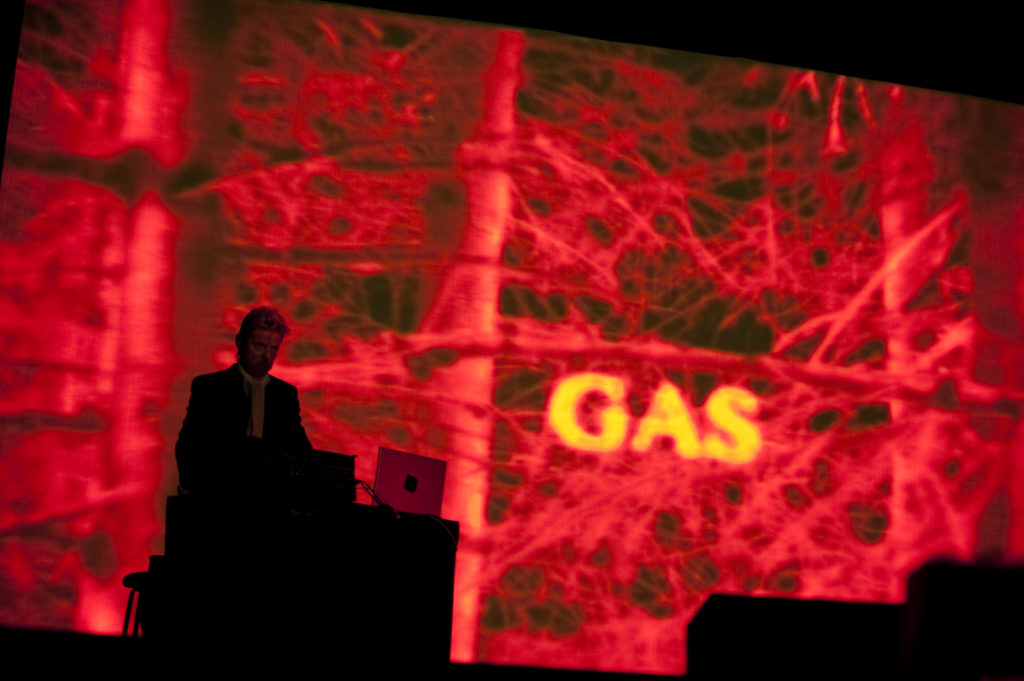