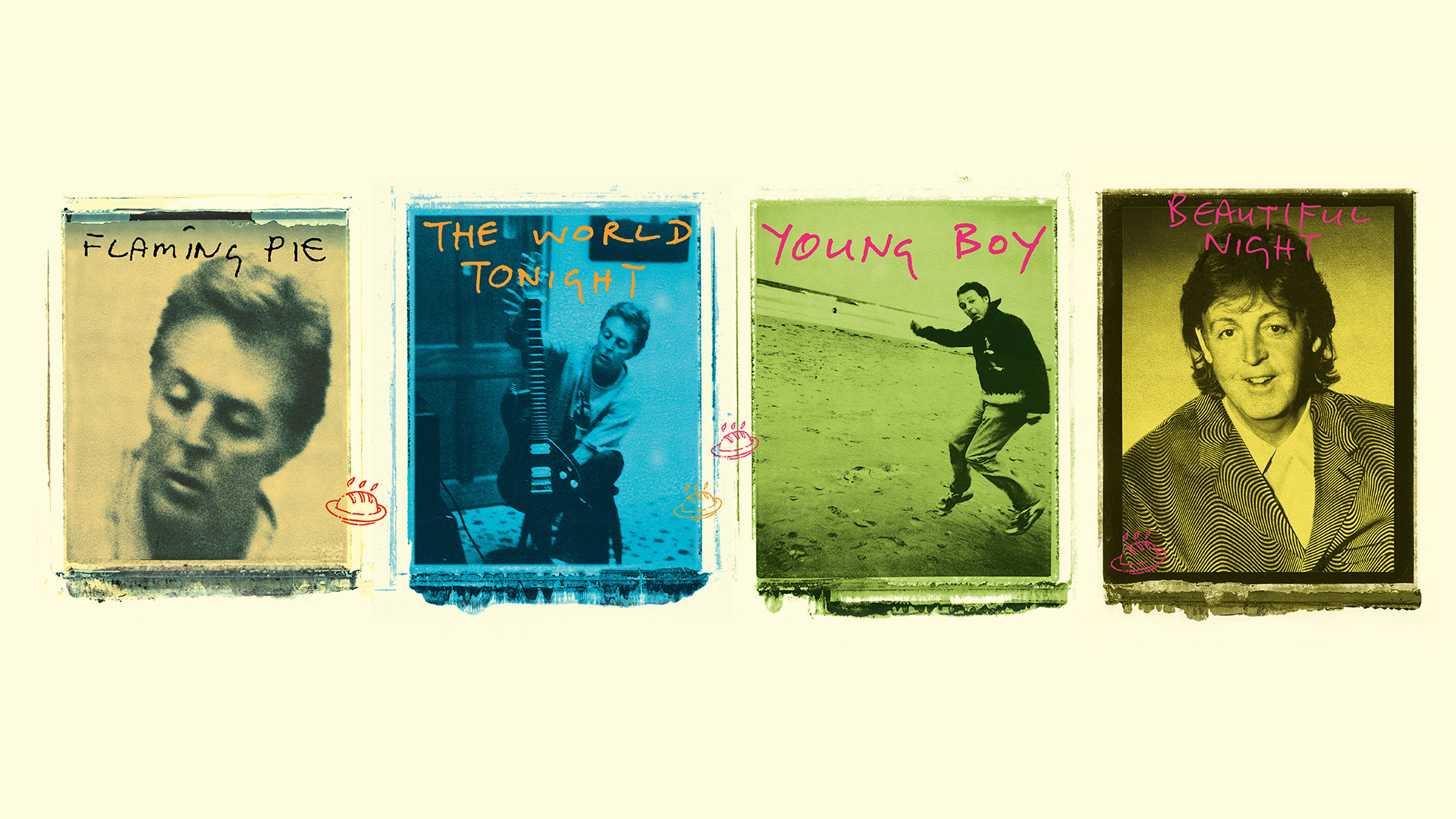 Paul McCartney took his fans on a wild ride in the 1990s.

The first half of the decade was largely spent celebrating his past, thanks to a pair of quality live albums (1990’s Tripping The Live Fantastic and 1991’s MTV Unplugged Official Bootleg) as well as an exhaustive multimedia deep dive into the history of the Fab Four with The Beatles Anthology documentary series, rarities collection, and heavy-ass coffee table book.

Yet as far as new material was concerned, Macca fans were treated to both the weirdest and the worst albums in the McCartney catalog when, in 1993, he offered up the absolutely dowdy Off The Ground counterbalanced by the debut LP of The Fireman, his electronic music project with Martin “Youth” Glover of Killing Joke, the vastly underrated and super out-of-print Strawberries Oceans Ships Forest. By 1997, McCartney’s epic journey through his past was inspiring the direction of his next solo endeavor, Flaming Pie. 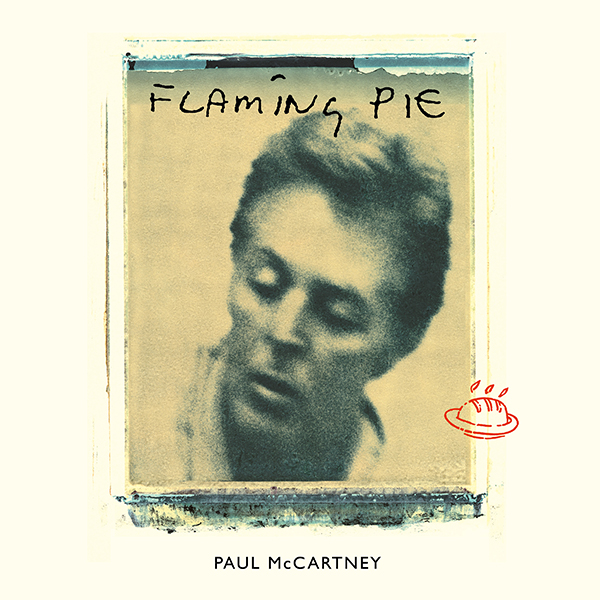 Presumably seeing how successful his tenure was with mate George Harrison on Cloud Nine and the Traveling Wilburys albums, Paul got together with Jeff Lynne of ELO to craft a proper follow-up to his 1989 classic Flowers In The Dirt, working in collaboration with longtime Beatles wizard Sir George Martin and an A-team of friends and family, including Ringo Starr, Steve Miller, Linda McCartney, and eldest son James.

Together, this supreme team created an album that united everything weird and beautiful about not only the Macca end of the Beatles spectrum but such experimental solo triumphs as Ram and McCartney II as well. A fitting fusion, no doubt, for an album which takes its title from a cheeky John Lennon quote about the origin of The Beatles’ name, where he said, “It came in a vision – a man appeared on a flaming pie and said unto them, ‘From this day on you are Beatles with an A.’”

Flaming Pie became the most commercially successful Macca release of the ‘90s, achieving his highest chart position since Pipes of Peace and would receive gold certifications in the United States, the UK, Japan, and more. It also serves as the highly anticipated thirteenth release in the Paul McCartney Archive Collection, including a numbered, limited seven-disc (5CD/2DVD) deluxe edition which, like its 12 predecessors, unboxes like a living museum of that particular moment in time.

In the case of Pie, in addition to the original album being remastered at Abbey Road Studios, in the super deluxe edition you will also find video content including the In The World Tonight documentary; original music videos, EPKs, interviews, performances, and behind-the-scenes material; a 128-page book containing previously unpublished images by Linda McCartney; expanded artwork and liner notes by writer Chris Heath that includes track-by-track information; recipes and new interviews with Paul, Ringo Starr, Jeff Lynne, Steve Miller, and key album personnel; studio notes; handwritten lyrics; and the 1997 Flaming Pie issue of Club Sandwich, which is the official newspaper of the Paul McCartney fan club.

Yet for the audiophiles in the Macca fanbase, it’s within the 32 bonus tracks spread across four CDs where the real gold dwells, chronicling the two-year period leading up to the final mix of Flaming Pie. Through a wealth of radio spots, home recordings and demos, alternative studio recordings, rough mixes, and B-sides, McCartney celebrates the 10th anniversary of his archive series by deconstructing a record that has only grown in its significance since its release 23 years ago.

Here are seven highlights from this most anticipated new box set, which goes on sale July 31. 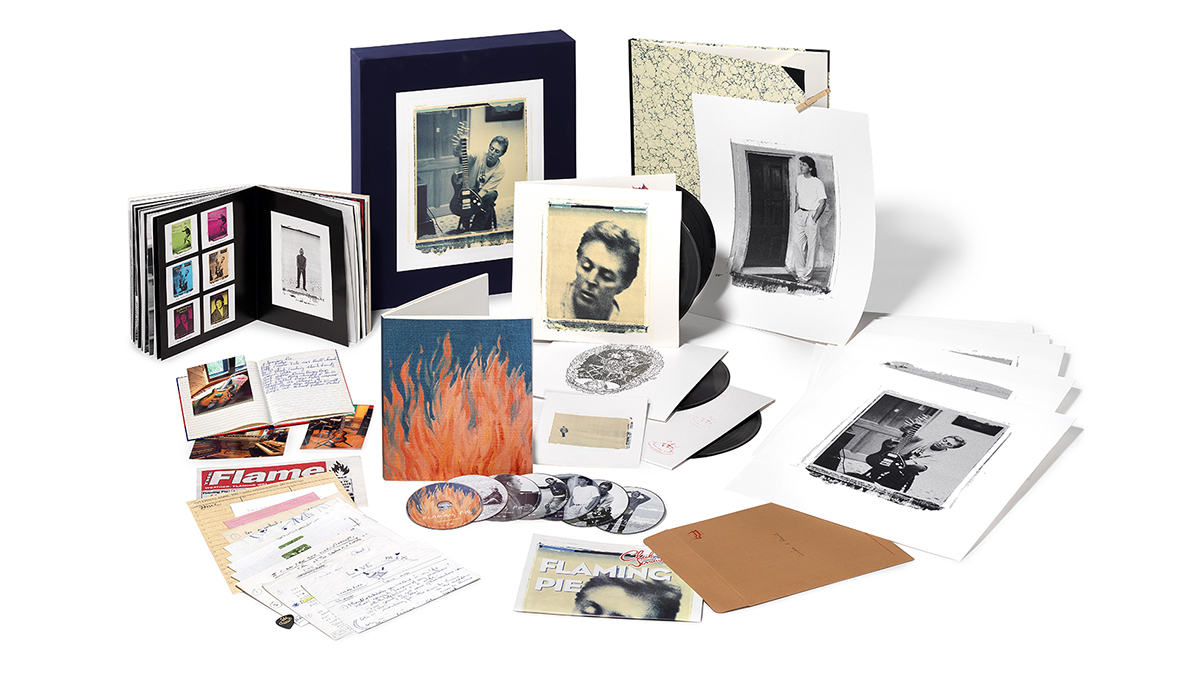 In this crude, lo-fi version of the buoyant title track, “Flaming Pie” sounds positively unhinged in the absence of Jeff Lynne’s studio polish. If this super rough cut, in fact, happens upon a random playlist shuffle it would be totally understandable if you mistook it for a deep Daniel Johnston ditty.

“We’re just doing a re-rehearsy,” Macca calls back to Jeff Lynne on this acoustic version of Flaming Pie’s final track. Solely accompanied by backing vocals from Linda and the sound of a skiffle beat played on a pant leg, the rustic charm of this rendition of “Great Day” would not have sounded out of place on Ram.

“Heaven On A Sunday” Rude Cassette

This deep but detrimental cut from Flaming Pie is a beautiful example of the simpatico sonic relationship between Macca and his son, James. This “Rude Cassette” version, however, strips away the yacht rock creaminess of the original in favor of something more akin to Beck or the Folk Implosion, as if he was in a dingy basement rather than a sailboat when he wrote the tune.

“The Ballad of the Skeletons”

Paul’s 1996 collaboration with Allen Ginsberg, also featuring Philip Glass and Lenny Kaye, is as weird as you can imagine. While your tolerance for this experimental track wholly depends on your tolerance for the late Mr. Ginsberg’s voice, it’s worth the endurance test to hear the creative interplay between Macca, Glass, and Kaye amidst the cacophony.

After Paul reunited with Ringo Starr to cut the Flaming Pie centerpiece, “Beautiful Night,” the inimitable Fab Four rhythm section returned to the studio the next day to cut this raucous, heavy guitar track with Lynne that would appear as a B-side for the “Young Boy” single in the UK, while on the flip of “The World Tonight” here in the States. This is a pure “Helter Skelter” assault on the senses in the most gratifying way possible.

Oobu Joobu was this weird radio show created by Paul McCartney in 1995 and ran for 16 broadcasts here in the States via Westwood One. Ever the sound collagist, the show was a freeform stream of demos, rehearsals, live performances, and unreleased recordings of solo McCartney and The Beatles. And, at least until he makes the entire program available for proper public consumption, the inclusion of all the shows pertaining to the creation of Flaming Pie in this box set is plenty good enough for now.

Flaming Pie at the Mill

To sit through this hour-long audio documentary of Macca giving listeners a tour of his studio is a task designed for only the most ardent McCartney fan. But if you fast forward to about 37 minutes into it, Paul heads into his computer room to showcase what he had been building at the time upon the suggestion of a friend. He claims to be not very technical, but considering the way by which he made seagulls sound psychedelic on “Tomorrow Never Knows” or dove headfirst into electronic music on McCartney II, it really is a delight to hear him bang on drum pads to create choirs and french horns, knowing the innovations that would lie ahead once he mastered the sampler as he has rightfully proven across multiple albums these past 25 years.

Published in partnership with UMe.