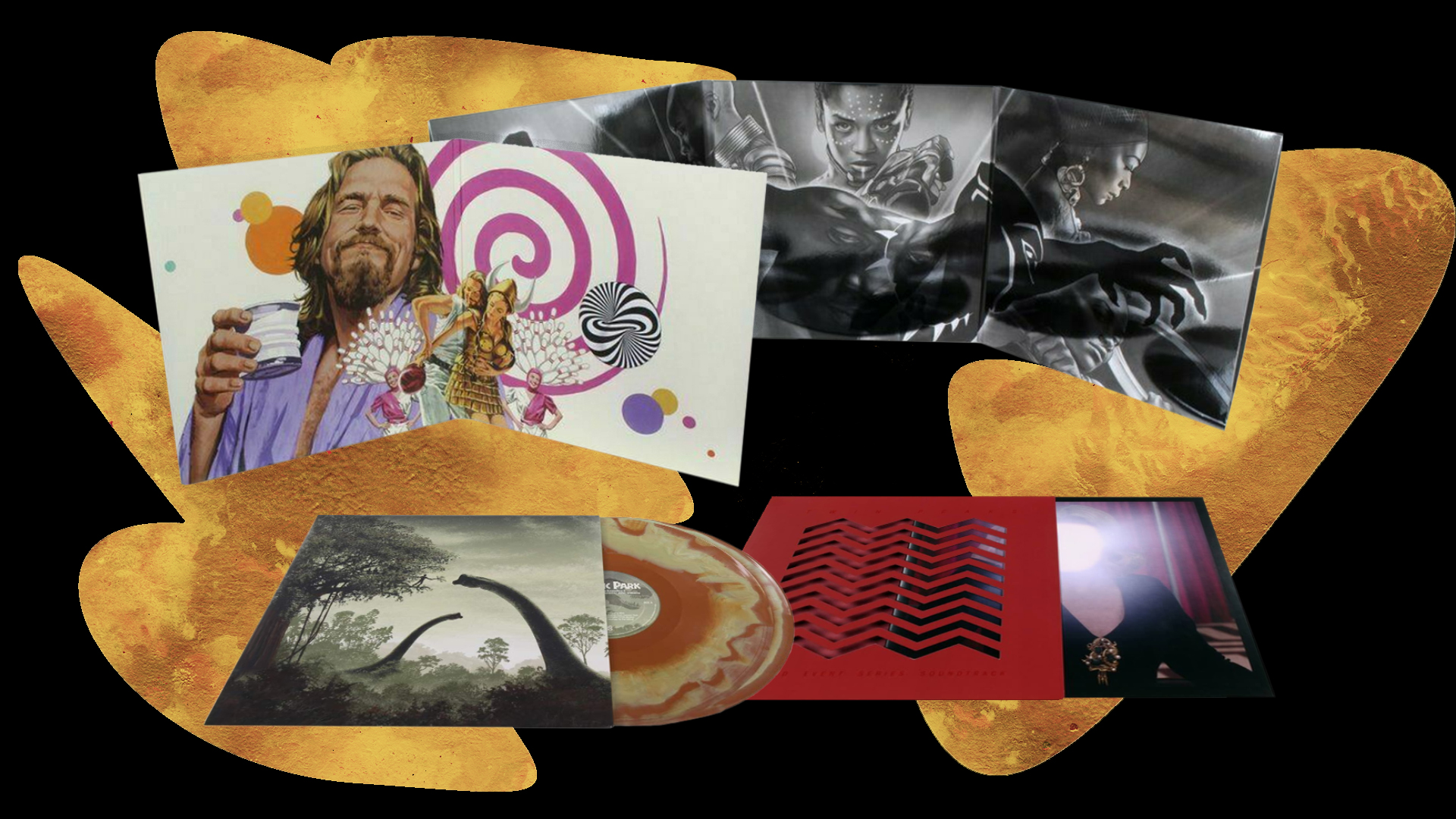 So, you’ve filled your record library with iconic rock, soul staples, pop hits, rare punk, disco delights, and funk favorites. You’ve got a few great classical pieces, some old holiday collections, a few weird things you bought because the cover looked cool, but you still want more? Have you explored the wonderful world of film scores and soundtracks?

Enter Mondo, the independent, culture collective that grew to fame with its awesome fan-crafted movie posters that now offers toys, apparel, books, games, collectibles, and, most excitingly, vinyl LPs for film and video games. Not only does Mondo offer your collection a wide variety of off-the-wall compilations, but it also brings them to life in astounding technicolor with original sleeve and cover art. Some of what they’re offering has never been released on vinyl before, and all of it is designed to tickle the nerd in you.

For a starter guide, check out our 12 favorite movie soundtracks below. And this is just scratching the surface.

Discogs may earn a commission from purchases made through affiliate links on our site. 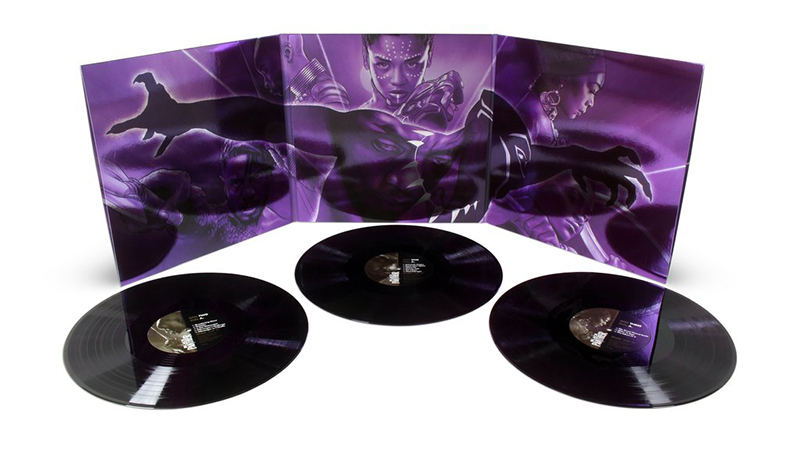 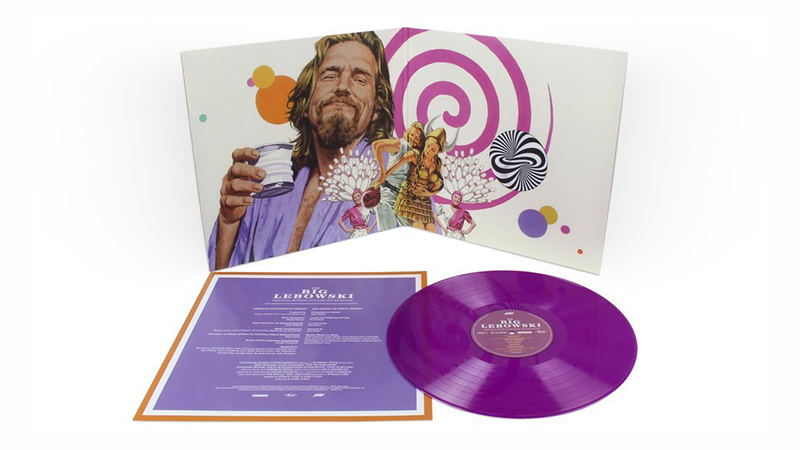 Sometimes, there’s a soundtrack – and I’m talking about The Big Lebowski here. Sometimes, there’s a soundtrack, well, it’s the soundtrack for its time and place. It fits right in there, and that’s The Big Lebowski in your vinyl collection. And even if it’s a collection of laidback, stoner rock classics – and The Big Lebowski soundtrack was most certainly that. Quite possibly the most laid-back, stonerific in cinema history, which would place it high in the running for most abide-able worldwide. But sometimes there’s a soundtrack, sometimes, there’s a soundtrack. Aw. I lost my train of thought here. But… aw, hell. I’ve done introduced it enough. That’s a play on the cult classic’s opening monologue. You read it in Sam Elliot’s voice, didn’t you? I bet you’re smiling right now, thinking about The Dude and all his favorite jams – not The Eagles, mind you (unless it’s Spanish-language covers by Gipsy Kings). This special 20th-anniversary wax includes Bob Dylan, Captain Beefheart, Elvis Costella, Nina Simone, and more. Paul Mann painted a wonderfully cooky cover, featuring The Dude and his mad bowling buddies. Open the book and get lost in the psychedelic swirl of its two-page centerfold. Grab a cold drink, spark a joint, and do what Dudes do best. Abide.

Mary and The Witch’s Flower 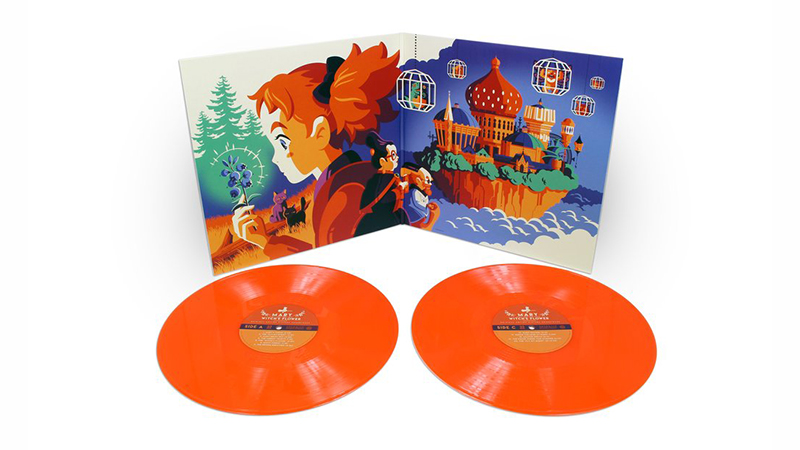 Put a little magic in your collection with this whimsical adventure. Mary and The Witch’s Flower tells the story of an eager girl who can’t do anything right until she discovers a secret of enviable power. The feature-length anime is as delightful as it is surreal, and the accompanying score by Japanese film composer Takatsugu Muramatsu is just as captivating. Wooden flutes, evocative strings, and hand drums conjure a fanciful world of fairies and spells. It’s the perfect instrumental soundtrack to put on when you’re feeling curious and amused. Plus, an original song by J-Pop band Sekai No Owari. Put one of these bright orange discs under the needle and let your imagination run wild through provincial fields, enchanted forests, mythical wonders, and romantic hideaways. If you should need visual inspiration (which you won’t), wander the technicolor prints inside the fold, courtesy of artist Tom Whalen. Just don’t let your familiar roam out of sight. There is some trouble lurking in the mists. 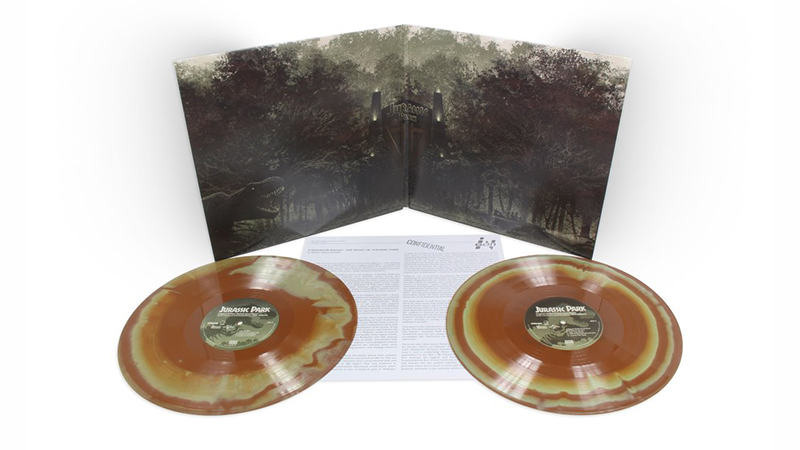 Hold on to your butts, humans and terrible lizards. The original Jurassic Park soundtrack from Steven Spielberg’s 1993 classic is available in stunning Mondo vision. It’s one of John Williams’ many masterpieces, though it may be his most majestic. Sweeping landscapes and unruly beasts spring to life in these picturesque and jarring musical journeys. There is awe, might, fear, panic, and absolute amazement around every corner. Williams once called the pieces “funny ballets,” a response to matching the dinosaurs’ rhythmic gyrations. JC Richard matches the Park’s beguiling character in original designs kept safe in a deluxe gatefold jacket. Don’t get all preoccupied with whether you could or should. Bring the Park to life in your living room. 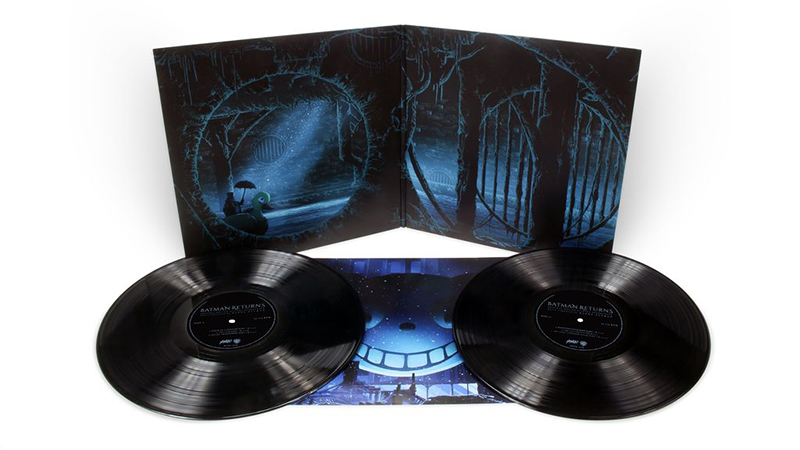 Sequels are rarely better than the original, but Danny Elfman’s score for Batman Returns is somehow pluckier, kookier, and more classically Elfman than its predecessor. Who else can create such playfully haunting atmospheres? It’s dark, angelic, surreal, fun, and heroic. It’s honestly just a joy to listen to, and Batman Returns is in itself a classic. You don’t get the iconic Batman theme outright, although it does appear in pieces throughout the sonic story. What you do get is eery Penguin tunes, slinky Cat Woman songs, cemetery noir, circus chase movements and “Face to Face” from Siouxsie and the Banshees. “Rooftops / Wild Ride” Pt. I and Pt. II are personal favorites. This vinyl drops you square in the steamy streets of Gotham City, and artist Kilian Eng invites you to explore its midnight forms. The vinyl comes in standard black, but if it’s good enough for Batman, it’s good enough for you.

Back To The Future 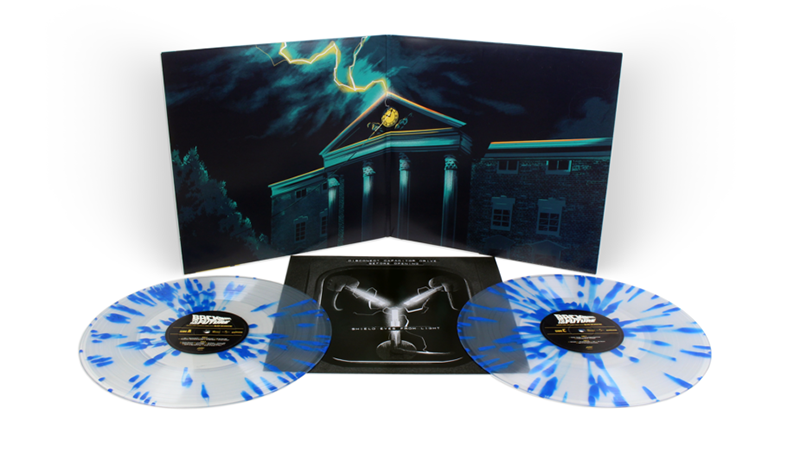 Some soundtracks are fun to listen to, some give you good memories, and some put you right back into the story. Alan Silvestri’s Back To The Future score is one of those third kinds. Drop that needle and feel Doc’s wild gaze. “Great Scott,” he shouts, and next thing you know, you’re going 88 mph in a souped-up Delorean, and you don’t need roads. Silvestri (Forest Gump, Who Framed Roger Rabbit, Cosmos: A Spacetime Odyssey) created a youthful and lively world to match the time-traveling antics. Mondo’s special edition brings this exuberant soundtrack to wax for the very first time, and the occasion is marked with eye-popping illustrations by UK color fanatic Matt Taylor. Why settle for the standard black vinyl when you can get it “Clear with Electric Blue Splatter?” That’s heavy. 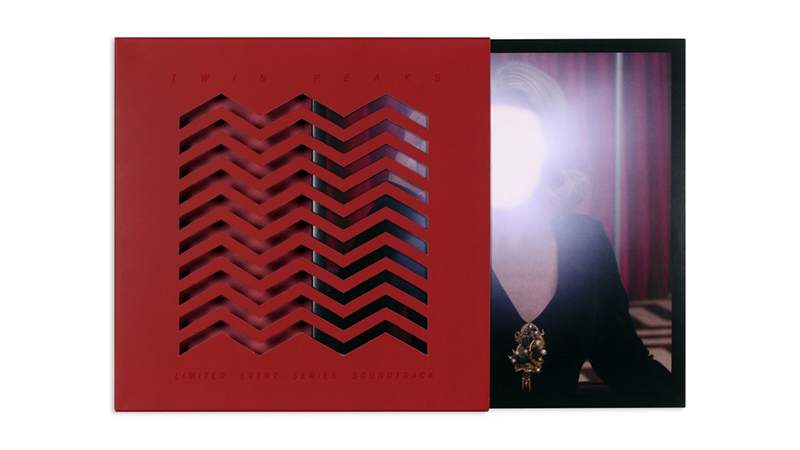 David Lynch’s surreal mystery horror drama is widely considered one of the best TV series ever produced. It’s foundational watching for film critics and hipsters alike, understood as a turning point for what a television program could be. The synth-heavy soundtrack was composed by Angelo Badalamenti alongside Lynch. It helps to characterize the strange, offbeat universe, equal parts soap opera, camp horror, and artful drama. Badalementi and Lynch reportedly wrote the iconic “Twin Peaks Theme” in 20 minutes, setting the tone for the entire program. It’s jazzy, moody, romantic, and always with a general sense of coy unease. The two vinyl discs come in red-eye color swatches, one in “Cherry Pie Splatter” and its pair in “Machine Room Grey.” The mystery lives forever, as long as you let these swirling synth play on. 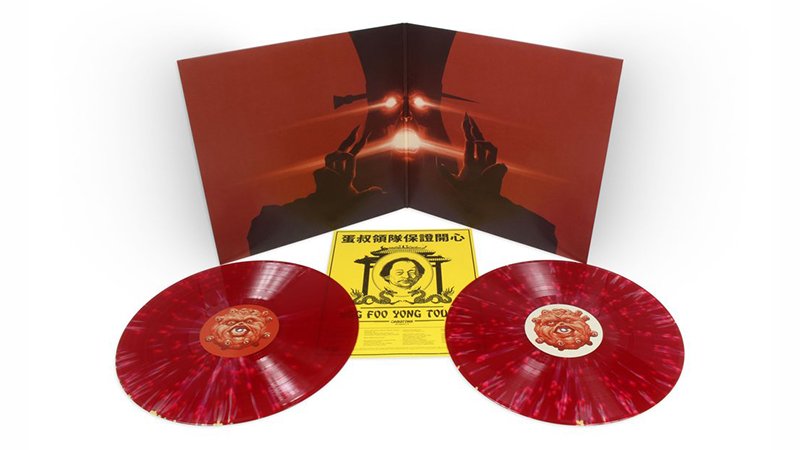 Everyone knows John Carpenter is the king of synth scaries, but when he puts his talents to action and adventure, he still knocks it out of the park. The director and composer was careful not to fat into the stereotypical pitfalls of other Asian-inspired American scores and staying true to his electric brand in hues of pulsing rock’n’roll. Released in 1986, it hits peak ’80s vibes with wah-wah guitar and out-of-the-box synth percussion. Still, you’ll hear Asian influence on the rhythms and ambient moods. If you’re going to go for John Carpenter, this may be one of the most enjoyable for background listening. Mondo gives the soundtrack its first vinyl release in vibrant “Red with Light Yellow Splatter,” while Phantom City Creative puts its dime-novel touch on the tri-color cover, back and inside display. 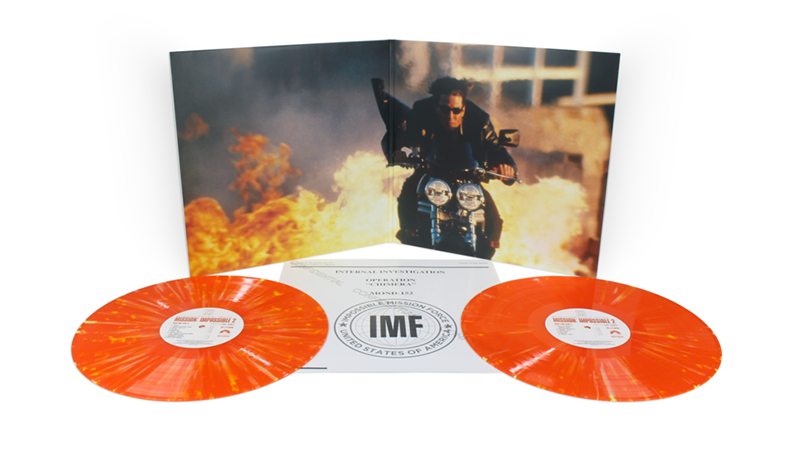 Mission: Impossible 2 is certainly not the first thing that comes to mind when you think Hans Zimmer. The Lion King is what I think of, and perhaps Pirates of the Caribbean, Inception, or Interstellar. Mondo doesn’t offer all those soundtracks, but even if they did, we dare you to revisit this grand soundscape of style and flavor. There is a strong Spanish influence, soft acoustic moments, high-octane metal breakdowns, and plenty of orchestral cinematic tension. It is a soundtrack that lives and breathes. Some might say it dangles dangerously from rocky cliffs. The good thing is, it won’t self-destruct after it’s been played in full. Sourced from the master tapes, not only is the Mondo edition the first vinyl pressing of the score, it’s the first complete release in any format. In lieu of fancy Mondo art, there are action-packed film stills, and the discs come in “Fire Colored Vinyl” and standard black. It’s currently available for pre-order. 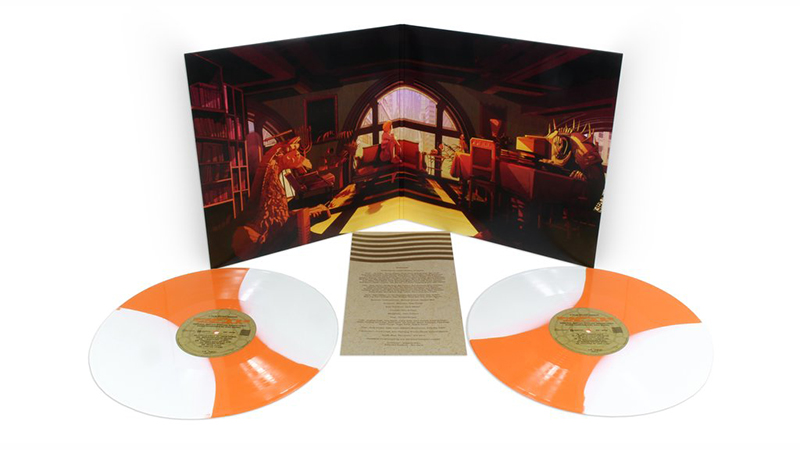 There’s no movie quite like The Fifth Element, and there’s no soundtrack quite like Eric Serra’s shape-shifting compilation. About 90% of the movie features music in one form or another. In this way, the soundtrack becomes a main character. It’s a trip around the world with Stalinist fanfare, reggae breakdowns, hula hooks, military snares, Algerian singers, and desert noises. Oh yeah, and there’s all that iconic opera singing. Sci-fi shrieks, twisted textures, and funky basslines build the unique landscape of this must-own work, peppered with comedic montages and tension-building atmospheres. London-based illustrator Shan Jiang graces the cover with a beautiful, dreamlike cityscape, including a darkened indoor scene within the folds. This is one you’ll have to find in the Discogs Marketplace since the original run is already sold out. (Don’t forget there are different color editions.)

Guardians of the Galaxy 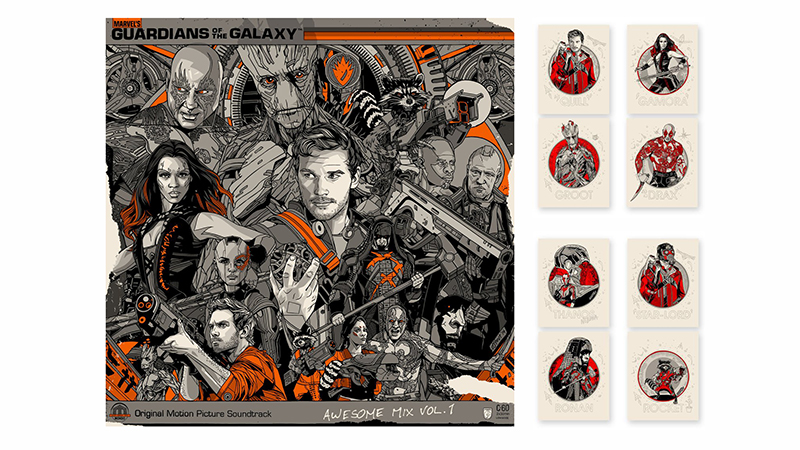 Star Lord’s mom made a mix so awesome, he carried it around through more alien planets than we can count. You, too, can jam to all these classic rock faves, including “Hooked On A Feeling,” “Spirit in the Sky,” “Moonage Daydream,” “I’m Not In Love” and more. This soundtrack was a huge part of the film’s initial success and wow-ed audiences as much as the hilarious characters, touching storyline, and incredible effects. Nerd artist Tyler Stout drew a massive collage for the skin, featuring the full Guardians squad and some creepy villains. Each album also includes nine randomly inserted screen-printed handbills for you to discover. You’re going to have to keep an eye out for this one, too, because it’s out of stock. 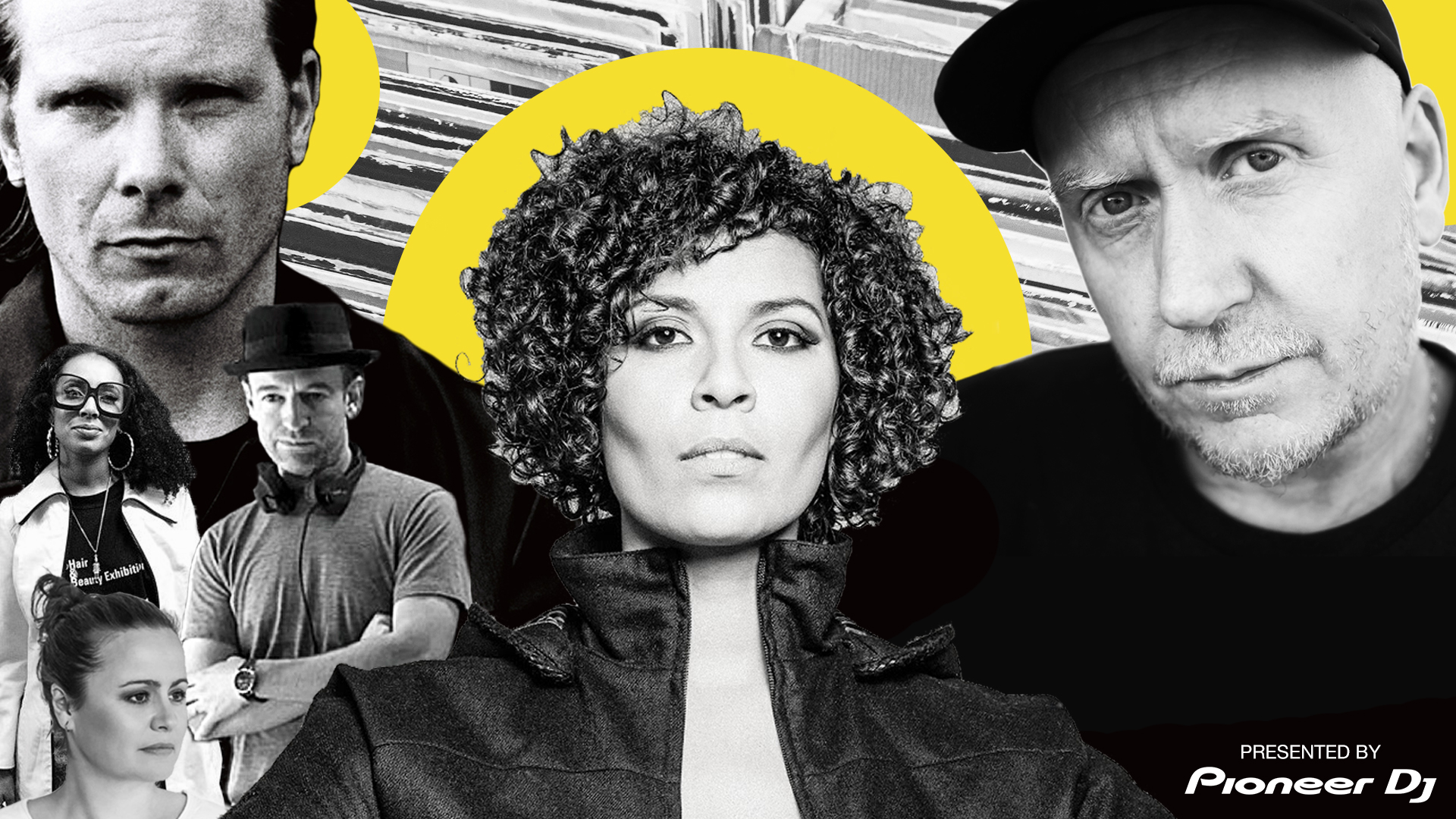