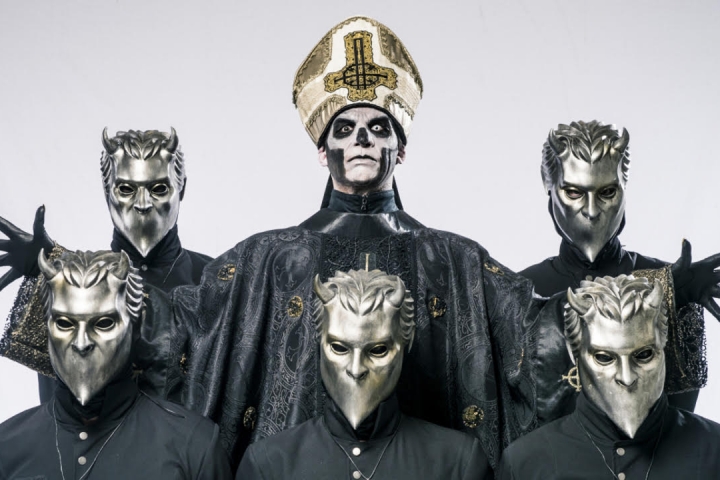 Editor’s Note: Shining a light on the more prominent artists of the passing decade; we’ll be taking a look at the artists who made a monumental impact on the 2010s and landed several albums in our 200 Best Albums Of The 2010s list in a series of pieces through the end of 2019. Today we’re looking into the darkness known as Ghost. All four of their full-lengths are represented, and all four almost landed in the Top 50 had the 47 variants of Prequelle landed in just a few more collections and wantlists. Discogs’ own Aub Driver takes us on the journey through Ghost’s decade of darkness!

Tobias Forge.  A name that has now become synonymous with artistry, brilliance, and controversy.  Some may call him Papa Emeritus or Cardinal Copia, as his true identity wasn’t revealed until 2017 due to legal suit between hired musicians, but the mystique and popularity of Ghost had already caught on like wildfire giving them multiple world tours and opening spots with some of the greats, such as Iron Maiden.  Each of the albums the band has released has brought them closer and closer to true rock legend status, and while some may argue it’s all a gimmick, the numbers don’t lie. All four of Ghost’s full-length records were released in the 2010s, and all four have charted! While a Nameless Ghoul he might have been for the better part of a decade, the one thing that everyone can agree on is that Tobias Forge is GHOST. 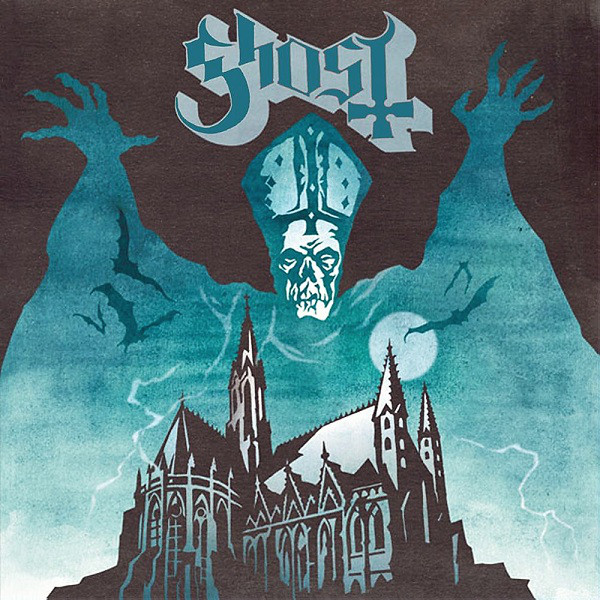 This was the game-changer. Ghost had released their 3-song Elizabeth EP in early 2010, which led to a deal with Rise Above Records releasing their first full-length album in October that same year, but it took until February 2011 to see a U.S. release. When Opvs Eponymovs landed in the states, the album took the whole genre of metal and turned it on its head. Listeners were confused by the satanic-themed, heavy-sounding, yet vocally approachable mood that Ghost delivered. The result? An immediate cult following and a polarizing conversation piece with accessibility that most heavy metal bands in 2011 were unable to touch. Ghost’s debut album was supported by amazing occult stage shows with anonymous costumed musicians that brought a new level of confidence and power that swirled around Ghost. Currently, there are 29 official vinyl pressings from Rise Above Records. 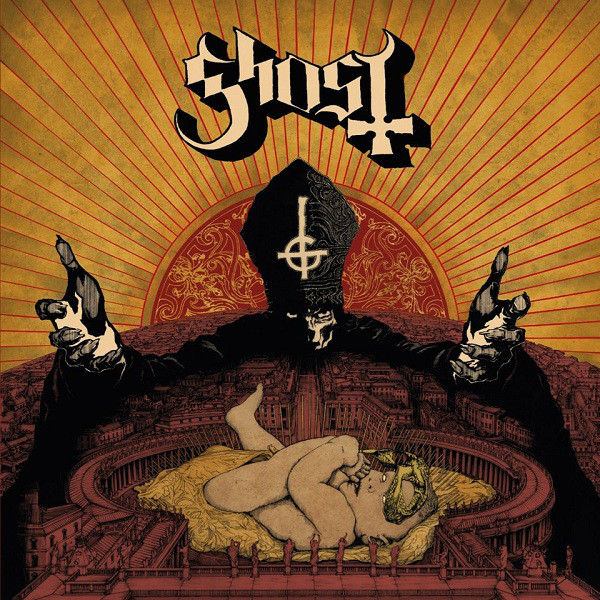 Translating from Latin to be “the most hostile,” Ghost embarked on their second album with the backing of new label Loma Vista and began recording in October 2012 in Nashville, Tennessee. Hiring producer Nick Raskulinecz whose Sound City pedigree and work with Foo Fighters amongst many other radio rock bands proved to be in the band’s favor as the album’s first single “Secular Haze” gave them a polished edge.  Infestissumam was released in April 2013 and hit #1 on the Sverigetopplistan (Swedish Album Charts) and #28 on the US Billboard 200. It even went on to win the 2014 Grammis Award (Swedish Music Award) for Best Hard Rock/Metal Album. Currently, there are 11 official vinyl pressings from Sonet, Rise Above, Loma Vista, and Republic Records. 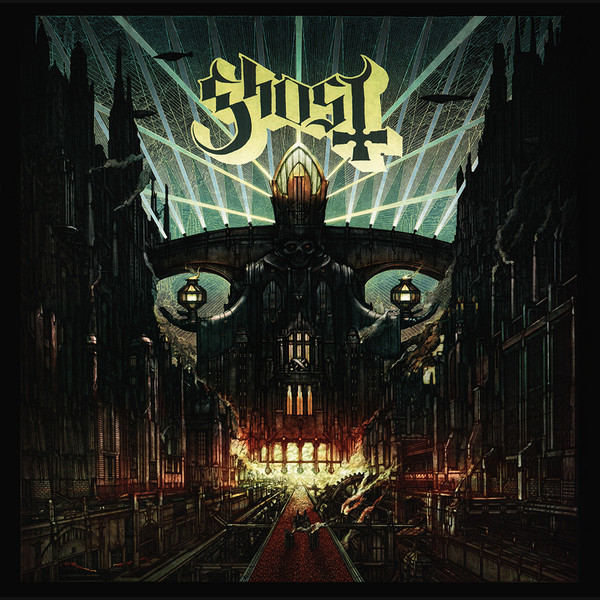 Do you like some pop with your heavy metal? How about a dance remix? Last month, Tobias Forge told Global News Canada that he prefers working with pop producers over metal producers because they “could reference things from Euro Disco to Slayer just to explain a simple idea.” That’s what happened with Meliora. Translating from Latin to mean roughly “the pursuit of something better”, Ghost’s third release, Meliora, debuted in August 2015. Forge tapped producer Klas Åhlund who previously worked with artists such as Robyn, Kesha, Kylie Minogue, Britney Spears, Katy Perry, and Madonna. Very metal. So metal, in fact, that it won the Best Hard Rock/Metal Album at the 2015 Grammis Awards. So freaking metal that the hit single “Cirice” won the 2016 Grammy Award for Best Metal Performance, which ultimately angered those metal purists in the audience, but it cemented them as a household name. That’s a hard feat to achieve, but Forge knew what he was after going into this album. Hence its place on this Top 200 list! Currently, there are 17 variants available from Reaktor Records, Spinefarm, and Loma Vista. 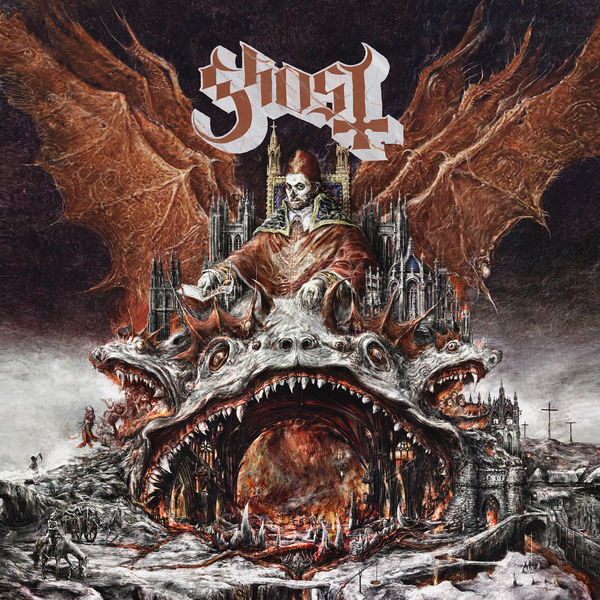 Don’t you want to dance?! Every song on this album could be a dancefloor hit. The fourth and arguably most popular of Ghost’s discography dropped last year in June 2018. Forge hired rising star producer Tom Dalgety who won “Breakthrough Producer of the Year” at the UK’s Music Producers Guild (MPG) Awards in 2015 and worked on Ghost’s Popestar EP in 2016. The lead single “Rats” spent seven weeks at #1 on the Billboard rock charts and helped propel Prequelle to #3 on the US Billboard 200. Prequelle hit #1 in Sweden, Norway, Finland, and New Zealand. Currently, there are 17 variants available from Reaktor Records, Spinefarm, and Loma Vista.

As we can see throughout the rest of the Top 200 list, each of their albums progressed the occult narrative and welcomed new listeners and audiences in different ways, with multiple vinyl pressings of every album driving collectibility throughout the past decade. MetalSucks declared Opvs Eponymovs to be the 5th best metal album of the ’10s, and you know what? While we’re feeling polarized over pop, metal, and rock, I have to agree that this album kicks ass and belongs on every headbanger’s shelf.