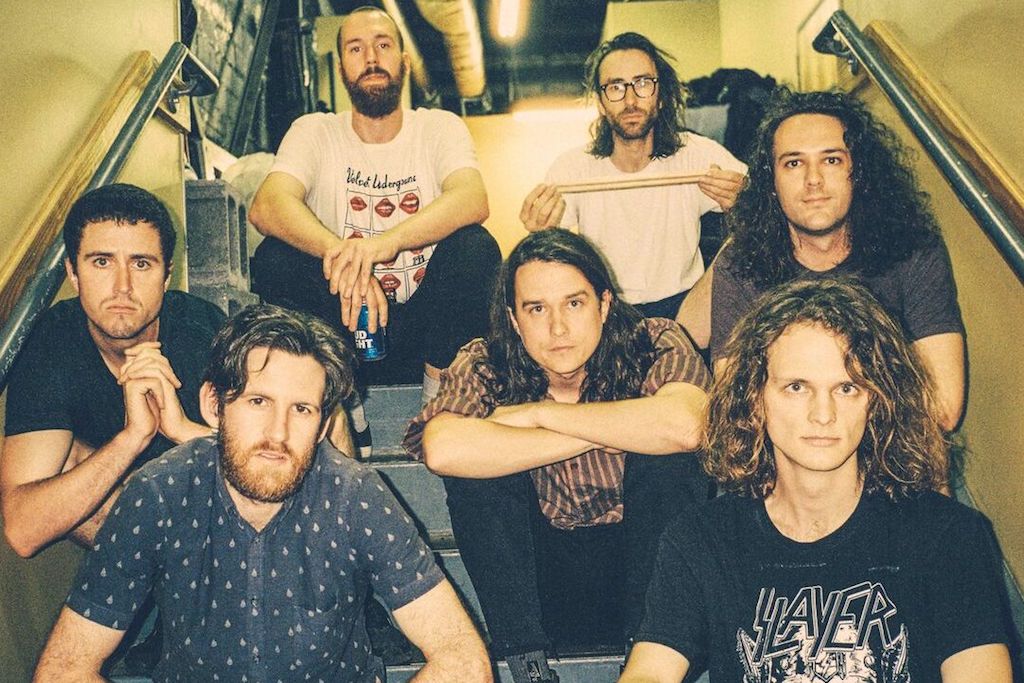 Editor’s Note: Shining a light on the more prominent artists of the passing decade; we’ll be taking a look at the artists who made a monumental impact on the 2010s and landed several albums in our 200 Best Albums Of The 2010s list in a series of pieces through the end of 2019. We take a look at King Gizzard & the Lizard Wizardimpact on The 200 Best Albums Of The 2010s list is impressive with five total albums making the list. In total, they release fifteen records over the decade… incredible!

We’re In Your Mind Fuzz: 10 Years of King Gizzard & the Lizard Wizard

King Gizzard & the Lizard Wizard is what happens when you take a normal rock band, remove every possible stylistic barrier and crank the boyish enthusiasm to 11. “As a young band, people always tell you not to do stuff, which is kind of strange,” drummer Eric Moore told Rolling Stone in 2018. “I’ve found that just saying yes to things can be powerful,” frontman Stu Mackenzie told The Quietus the same year.

Since their 2010 formation, the Aussie rockers have said yes to almost everything that’s popped in their heads: psychedelic freakouts, country & western, an instrument called the Flying Microtonal Banana. Fearful of flooding the market, most bands release one LP a year at most; in 2017 alone, King Gizzard said “screw it” and released five. In 2019, they followed Fishing for Fishies, a Paul McCartney-style pop album, with Infest the Rat’s Nest, a thrash metal blitzkrieg worthy of Anthrax.

King Gizzard’s refusal to kowtow to anything but their own muse has earned them five albums in the Billboard Top Rock Albums chart. In a 2019 Facebook post, Phish leader Trey Anastasio called them “my favorite band.” “They’re not a jam band, but they love the act of creation, and you can feel it,” he told the New York Times Magazine the same year. That’s the sweet spot King Gizzard occupies: they’re always inventive, but they rarely noodle to the ends of the earth. Prog fans who prefer concision: get on board.

To Cap Off Their Triumphant Decade, In Which They Released 15 Studio Albums, Here’s A Rundown Of King Gizzard & The Lizard Wizard’s Discography. 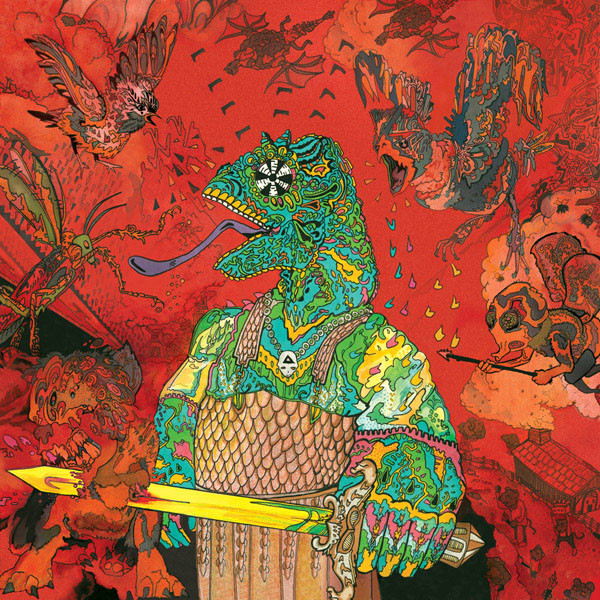 Before King Gizzard was a genre-smashing juggernaut, the band played tape-damaged garage punk in the vein of Ty Segall, Thee Oh Sees or Jay Reatard. Their debut 12 Bar Bruise is pummeling and promising, but slightly garden-variety; thanks to DIY labels like Burger Records and In the Red Records, bands like this grew like weeds in the early 2010s. Still, tracks like “Elbow,” “Cut Throat Boogie>” and “Bloody Ripper” are great for a quick hit of noisy fun, if not necessarily musical range. 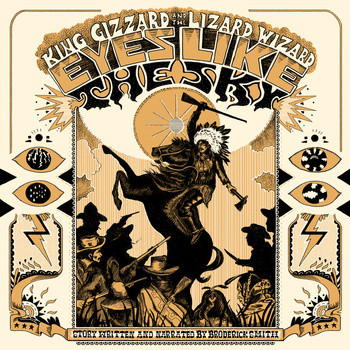 “I love Western films. I love bad guys and I love Red Dead Redemption. Oh, and I love evil guitars.” That’s how Mackenzie put Eyes Like The Sky in a press release, and that’s what it sounds like: a Wild West gunslingers’ tale soundtracked by Ennio Morricone and Dead Man-era Neil Young. Narrated by King Gizzard keyboardist Ambrose Kenny-Smith’s father Broderick Smith and full of twangy tritones and harmonica wails, Eyes Like The Sky is the band’s successful first attempt at pastiche. 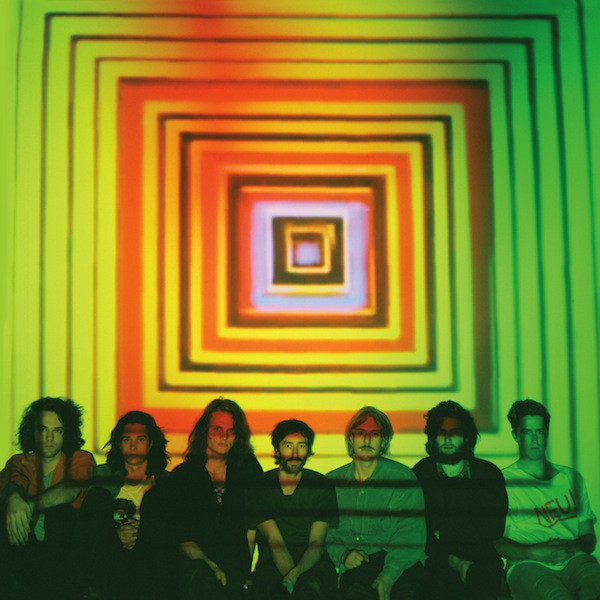 Float Along – Fill Your Lungs

King Gizzard zoomed in on their sound with Float Along – Fill Your Lungs, an album of trippy, driving grooves. Doing another 180, the band introduces the sitar into several songs, coming across like an act of Brian Jonestown Massacre worship a la Their Satanic Majesties’ Second Request. The band was starting to grow out of this tinny production style — which does the music no favors — but Float Along drifts in the right direction. 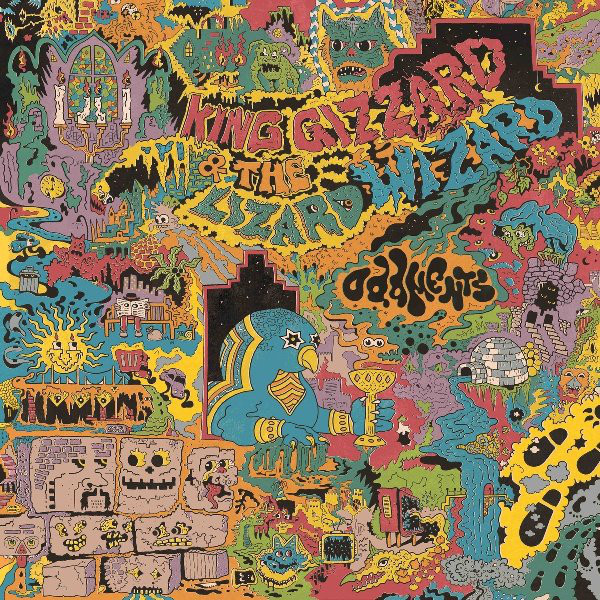 Less a progression than a clarification of Float Along – Fill Your Lungs, Oddments buffs out that album’s flaws and zeros in on its strengths, updating dusty old garage rock for the 21st century. There’s still plenty of static and noise, sometimes to a fault. But with richer production, Oddments’ boneheaded Trashmen jams (“Vegemite”) Exile on Main St.-style strummers (“It’s Got Old”) and mumbled acoustic ballads (“Homeless Man in Adidas”) shine like never before. 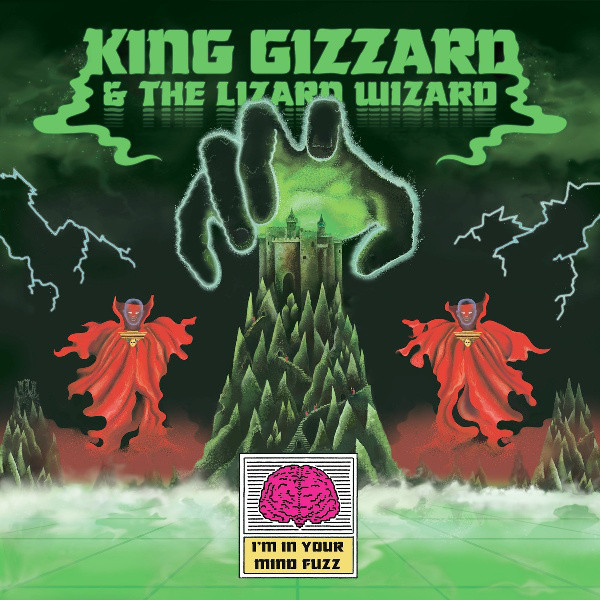 I’m In Your Mind Fuzz

Expanding from their own label Flightless Records, King Gizzard co-released I’m In Your Mind Fuzz on Castle Face, the record label of Thee Oh Sees’ John Dwyer. Fitting for its B-horror album art, the music adheres closely to the Goblin or Hawkwind script, only breaking the din for a few spaced-out ambient moments here and there. While not breaking new ground, the album is on the more digestible end of the King Gizzard spectrum and should appeal to fans of meat-and-potatoes psychedelia. 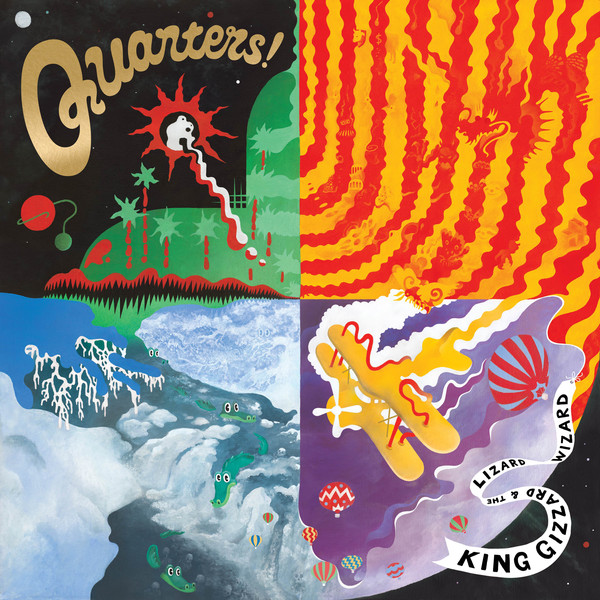 A suite of four songs clocking in at 10:10 each, Quarters! is where all the 1960s signifying gets interesting. Opener “The River” is in 5/4, nodding to Pentangle’s “Light Flight” (and, by extension, Dave Brubeck’s “Take Five”) before weaving through tempos and moods. The rest sounds like a mishmash of 1960s and 1970s guitar music, both worshipping garage rock’s past and sending it up. Quarters! is where King Gizzard began to impress with plain old music, not just fuzz attacks. 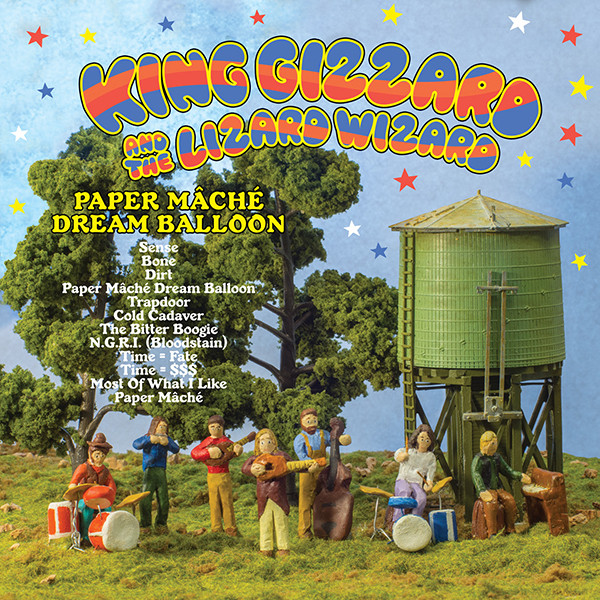 After the four-part suite of Quarters!, King Gizzard signed to ATO Records and rethought their approach. “You can spend so much time thinking about music, and not actually doing it, and that’s bad,” Mackenzie told DIY Mag in 2015. “We started to feel like, ‘Let’s just write some songs that are just songs.’” King Gizzard sounds relaxed on Paper Mâché Dream Balloon, free to stretch their legs and mellow out: stripped-down songs like “The Bitter Boogie,” “Time = Fate” and “Paper Mâché” owe more to the Rolling Stones’ Flowers than to delay pedals and tape hiss. 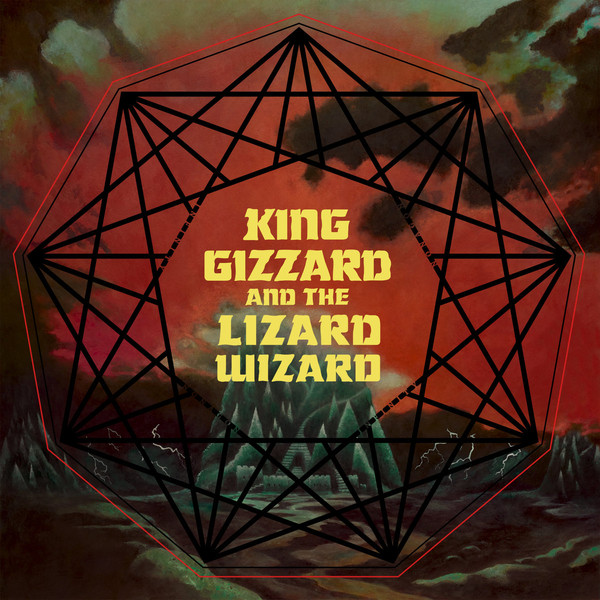 “During the recording of Nonagon Infinity, I broke my mind a little,” Mackenzie told The Quietus in 2018. “It was like my brain was coming through my skull at one point.” Their second album for ATO Records, Nonagon Infinity marks the point where King Gizzard comes home from Paper Mâché Dream Balloon’s pastoral vacation and returns to brain-melting psychedelia. From “Robot Stop” to “Mr. Beat” to “Road Train,” the band rarely lets up from unnervingly high-BPM motorik. 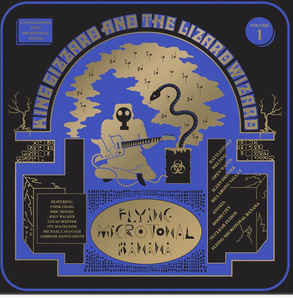 In 2015, inspired by the Turkish bağlama, Mackenzie had a luthier friend build him a yellow guitar with extra frets, allowing quarter tones to be played rather than only half-tones. The guitar resulted in Flying Microtonal Banana, a King Gizzard album featuring the instrument of the same name front and center. Flirting with non-Western tonality could have resulted in a mess, but Banana works — Mackenzie tastefully weaves the custom guitar in and out of songs like “Melting,” “Billabong Valley” and “Doom City” to add a sun-scorched Middle Eastern vibe. 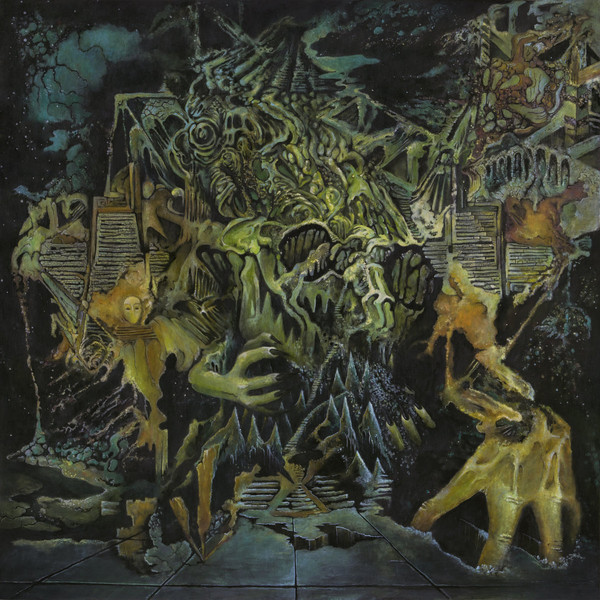 Murder Of The Universe

After the side road of Flying Microtonal Banana, King Gizzard went full Blind Guardian or Dream Theater with Murder of the Universe, a three-movement concept album featuring, among other disreputable denizens, a cyborg, a desiccated corpse and a Balrog. (“It might not be the Balrog from Middle Earth, but he is a sort of fire demon,” Mackenzie clarified to The Observer in 2017.) You don’t need to follow the story to get swept up in Murder Of The Universe’s nerdy mythical sweep; it remains the most sweeping, daring album they ever made. 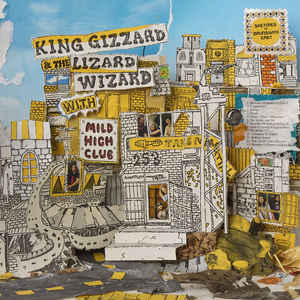 Taking a necessary breather from the batshit Murder Of The Universe, the band brought new blood into the room — L.A. psych-pop duo Mild High Club — and went in a jazzy direction. The resulting music wafts rather than assaults, providing a palette cleanser from string-popping mania. “Countdown,” “The Spider and Me” and “A Journey to (S)hell” only get as weird as late-period Miles Davis or Herbie Hancock, and mythical fire demons need not apply. 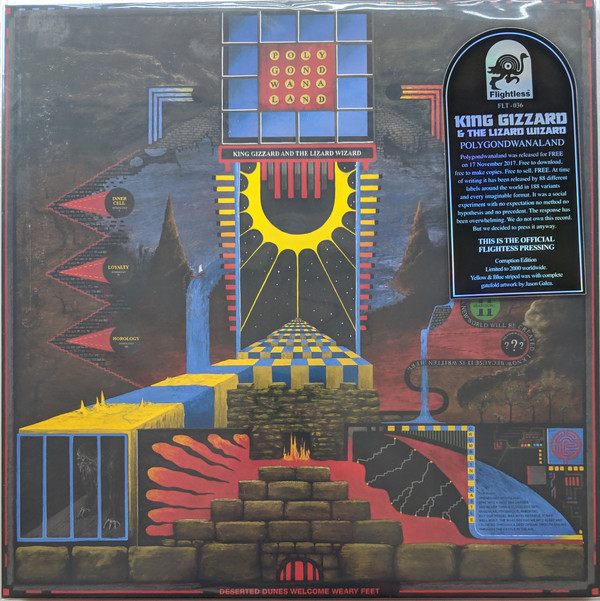 For their fourth album of 2017, King Gizzard took a different tack. “This album is free. Free as in free,” they wrote on their website. “We do not own this record. You do.” This act of generosity helped boost a fine album that otherwise sounds a bit like King Gizzard is spinning their wheels; while no track on Polygondwanaland is a failure by any means, most of its ideas and ideas had been established on earlier albums. But as an easy entrance to King Gizzard’s ever-expanding discography, it will do in a pinch. 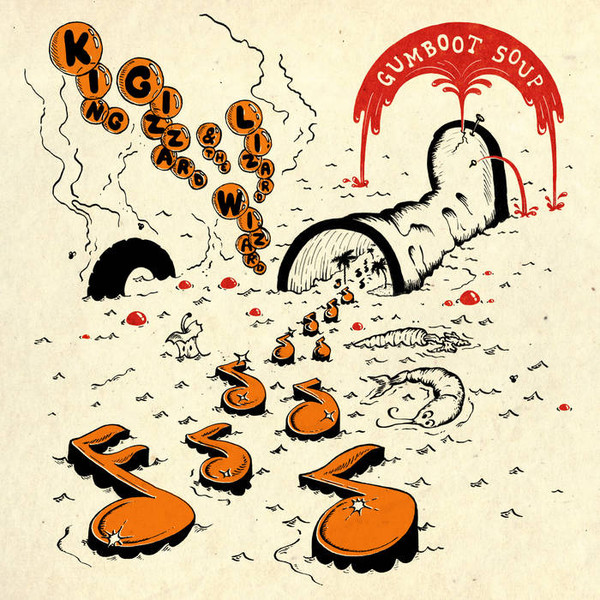 One of King Gizzard’s more accessible works, Gumboot Soup unclutters the recipe and kicks up the vocals in the mix, keeping the weirdness neatly contained like Zappa or Beefheart. While the band sounds slightly exhausted from its firehose of output in 2017, sophisticated tracks like “,” “Superposition” and “I’m Sleepin’ In ” showcase maturity and restraint they didn’t have before. 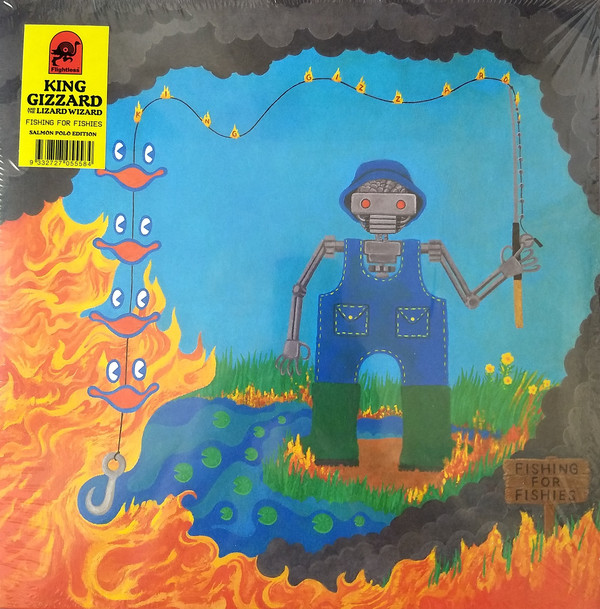 Described by King Gizzard as their attempt at the blues, Fishing for Fishies became something else — an offbeat pop confection. “We were trying to make this blues record, but it just kept sliding off,” Mackenzie told Dork Magazine in 2019. “Every song was its own little unique world.” On their most fully realized album to date, the band sounds like they’re working with a complete historical toolbox: “The Bird Song” channels Wild Honey-era Beach Boys, goofy rocker “The Cruel Millennial” boogies like Joe Walsh, and “This Thing” sounds like a Stevie Wonder joint. Most of all, King Gizzard sounds happy and cooperative, and for good reason: Fishing for Fishies is their psychedelic pop masterstroke… so far. 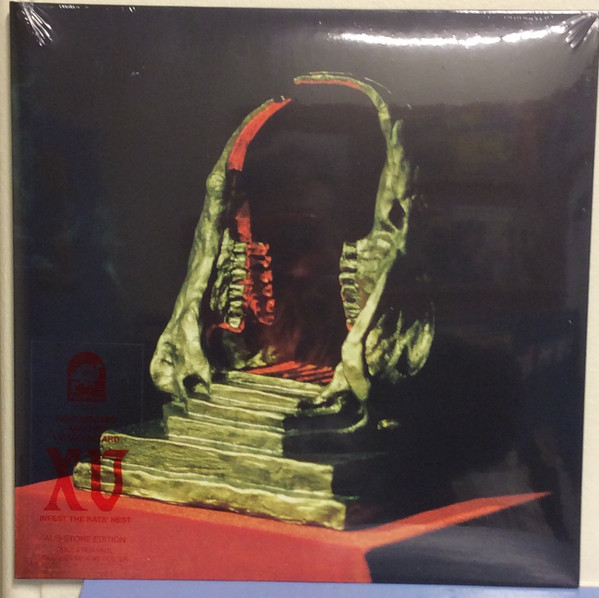 The band’s wildest heel-turn (and that’s saying something), Infest the Rats’ Nest throws Beatlesque pop to the birds and salutes Metallica, Kreator, Slayer, and other thrash greats. “It’s less, like, monsters and creatures,” Mackenzie told New Noise Magazine in 2019. This one is like, “We are fucked. You are fucked. You are going to hell, and hell is on the surface of Venus.” From “Planet B” to “Hell,” Infest the Rat’s Nest works because it’s respectful, paying homage to 1980s riffage without making fun of it. A matter of months after Fishing for Fishies, King Gizzard turning around an opposite album this satisfying is an achievement. Horns up.