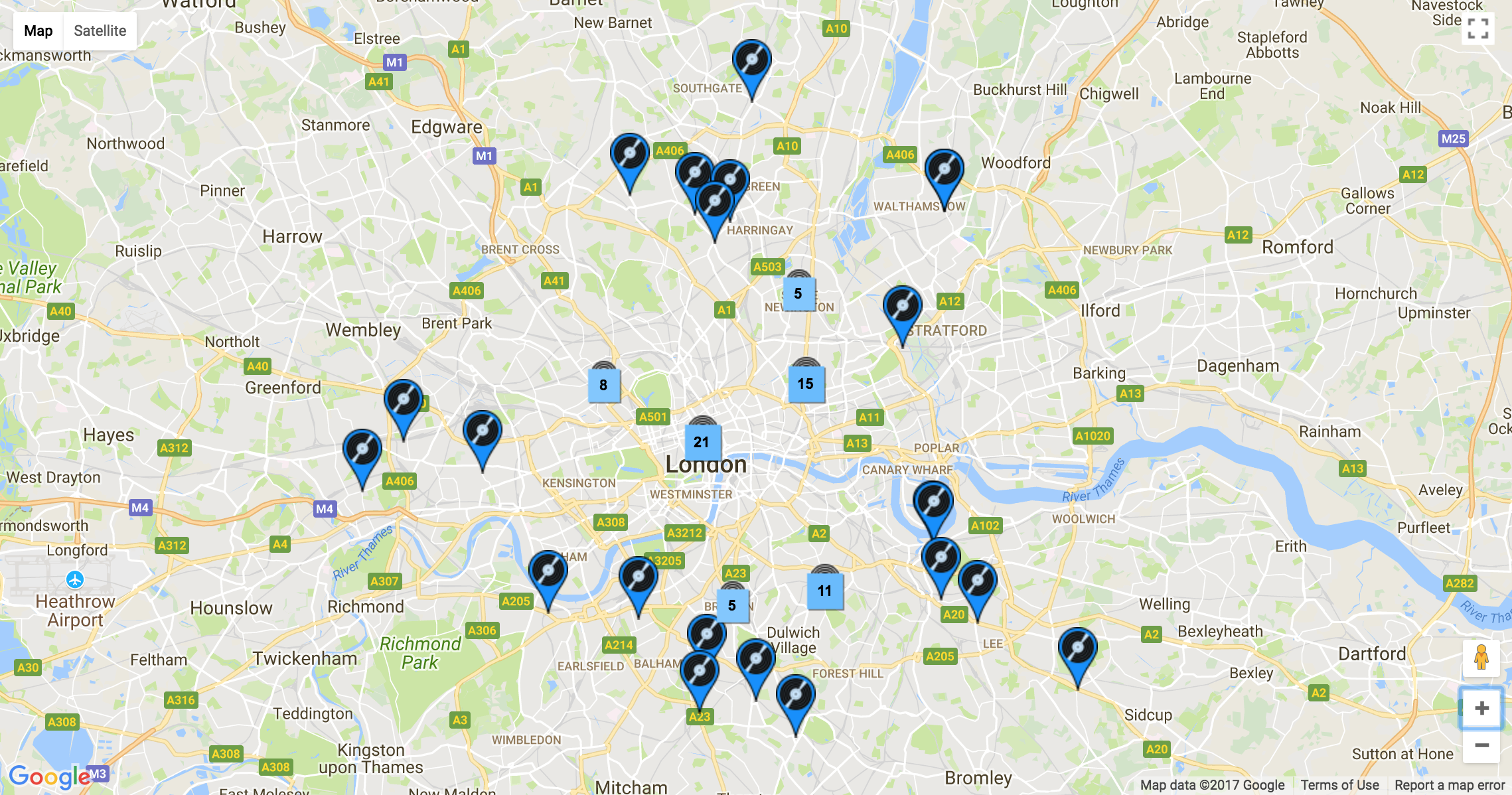 “Best Record Stores” lists undoubtedly depict a biased slant. If the list is “curated” by a single writer or a cultural aggregator of lists (we’re looking at you, Thrillist) posturing as a local, best is ambiguous at best. With our series of city-specific Best Record Stores, you’re getting the definitive list of spots according to some well-known record lovers in the city they call home.

Sounds pretty simple, right? We’re certainly hoping so because we’re continuing to the best record stores in London, UK. We asked some of our favorite Londoners like Ben Beaumont-Thomas, Music Editor at The Guardian and Jamie Atkins of Record Collector Magazine and more to chime in on The Best Record Stores In London!

We give you… The Best Record Stores In London! 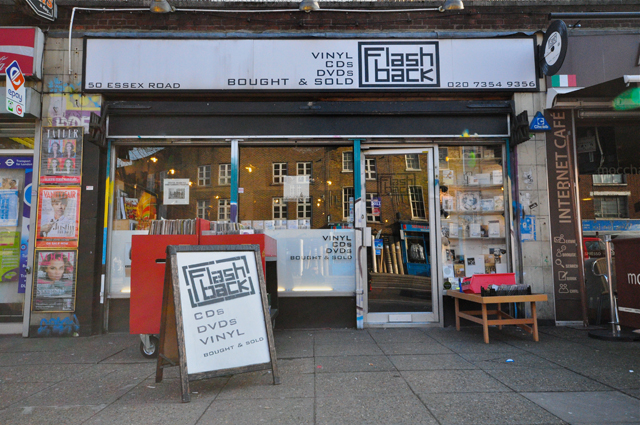 For the last two decades, my favourite record shop in London has remained Flashback on Essex Road. It used to be situated, handily enough, a short stumble away from my favourite pub, The Mucky Pup where I ran a vinyl only social, The Olde Peculiar, every Sunday for donkeys years. Funnily enough most of the staff from Flashback used to drink and DJ in there as well. The drinking stopped abruptly for me nine years ago (and even The Mucky Pup is no more) but the other crippling addiction – to vinyl records – continues unabated. It’s as much a social thing as anything else these days, I have friends who work there and it’s good to be able to have a relaxed conversation (about Queen live albums, the likelihood of a comprehensive series of good quality Coil reissues and what constitutes the right amount of records by The Fall to own) without ever having to feel like you’ve somehow taken a wrong turning in life. I’m not a vinyl obsessive to the exclusion of other formats – I own as many CDs as records and probably somewhere in the region of six times the amount again of digital music – but there is something unique, to me at least, about tracking down that doom metal LP, cosmic disco 12″ or Gary Numan picture disc 7″ that you’ve been after for all those years. I’ve bought records from some really interesting places – a gramophone and oud repair shop in Cairo, the world’s largest record fair in Utrecht and a shipping container in Baton Rouge just after Hurricane Katrina – but Flashback is where I’m most comfortable. If you’re in town next month, pop in – it’s their 20th birthday. I hope I’m still heading down there in another 20 years.” – John Doran, co-Founder of The Quietus 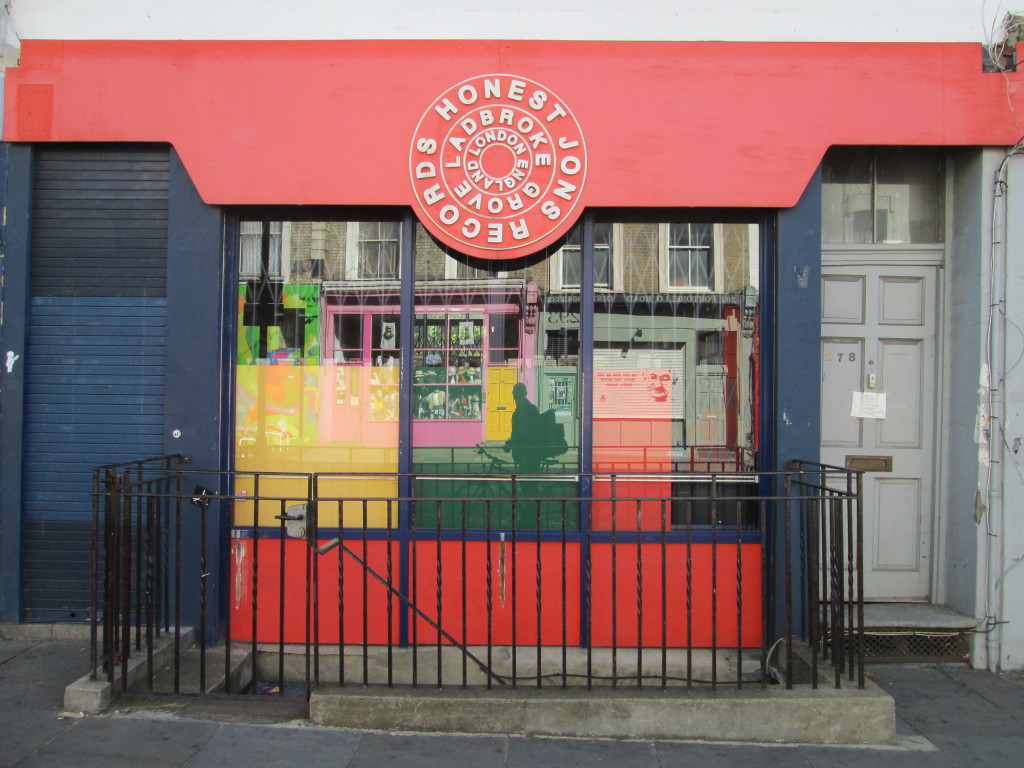 Aged 15, I was vaguely aware that Jazz was good, but the sheer breadth was intimidating – and our family’s 56k modem restricted the amount of Napster research I could do. Step up Honest Jon‘s, who recommended me Sonny Rollins‘ ‘Saxophone Colossus‘ and set me on the path. Since then it’s been twice-yearly pilgrimage for a three-figure sum dropped on their impeccably curated mix of black-Atlantic styles – from Hip Hop to Gospel, Post-Bop to Afrobeat, Dub to Funk – as well as the cream of underground dance. Their label meanwhile is so good, and reasonably priced, that you can buy blind in total confidence. And from Sam Dees to Dillinger, the number of records I’ve bought purely because they’ve been playing on the shop stereo is an embarrassing testament to my impressionability – and to Honest Jon’s magnificently cosmopolitan atmosphere. – Ben Beaumont-Thomas, Music Editor, The Guardian 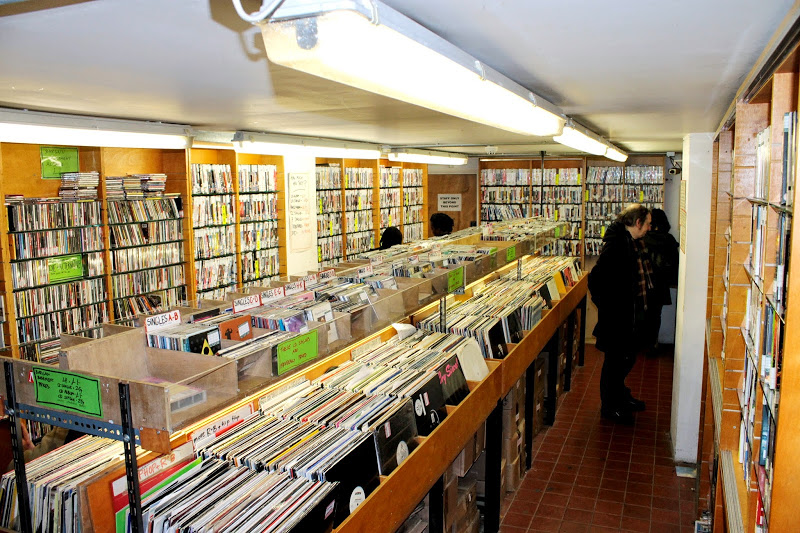 Music and Video Exchange in Greenwich is the only spot I always make a visit to when passing by. I’ve found so many records from my Discogs Wantlist in there at decent prices. They even have a bargain basement which never disappoints. There used to be one in Soho, but last time I checked it was being gentrified… – Chris Royle, DJ Mag + Diffrent Music 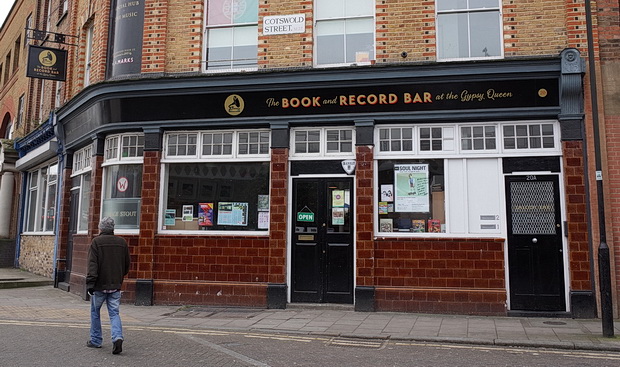 The Book and Record Bar

The Book and Record Bar opened in 2013 in an old corner pub a few steps from West Norwood station. It’s by far my favourite place in the whole city for just great old records. I’ve spent hours at a time in there in the past few years and always pick up records I’m gonna listen to again and again rather than file away. The stock selection is immense too – voluminous and quality. The owner Michael is a contributor to the Rare Records Price Guide, and he’s collected over 10,000 records over the years. I take bands from overseas there a lot when they’re looking to pick up some records while they’re in town. It’s like watching kids in a sweetshop. They also have an equally impressive collection of books for sale and the curation there is just as impeccable. – Paul Bridgewater, The Line Of Best Fit 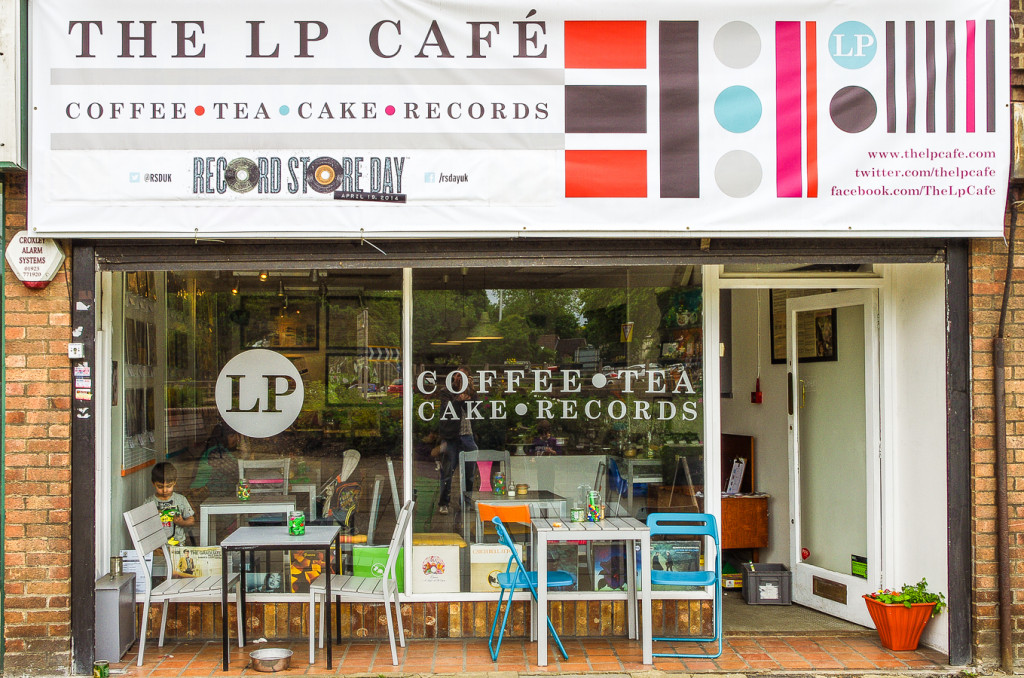 The LP Cafe in Watford, just a short trip on the Overground away

Although not technically in London (despite what people from Watford try and say about their hometown), The LP Cafe is worth the trip on the Overground. Since it’s inception a few years ago it’s given a whole new lease of life to the young creatives of the town; it’s a meeting place for bands, artists, and the birthplace of so many collaborations. A coffee shop with a wide range of vinyl records, you’ll be able to spend a while looking through crates full of African Disco, to Norwegian Black Metal. There’s plenty of mainstream offerings too, along with soundtracks, and more obscure vintage finds. – Alexandra Furssedonn Howard, Co-Editor, The 405

The Record Deck – (On A Canal Near You – London UK) 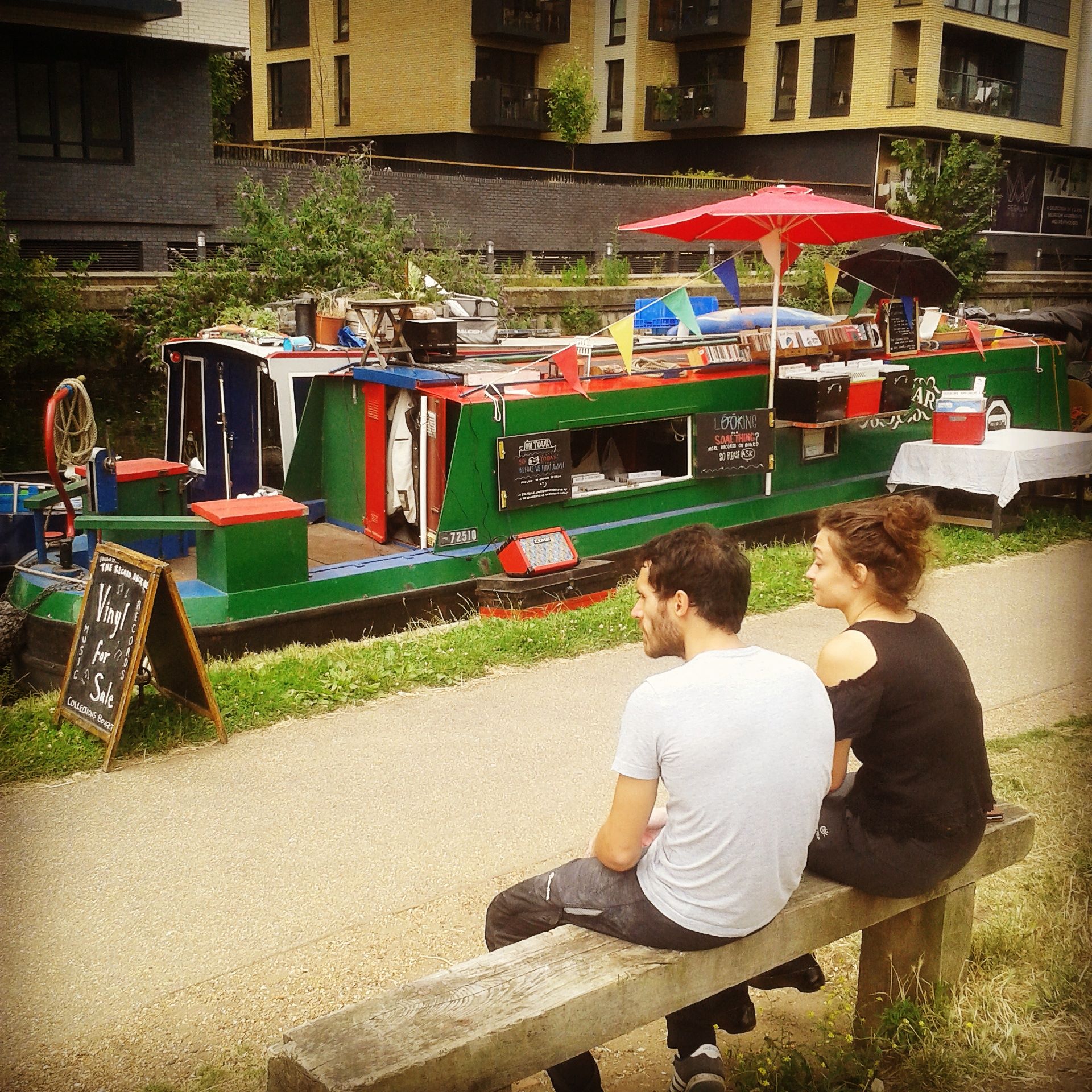 London can be a stressful, pretty bloody, grimy place to live. Just check how much unspecified dark gunk appears up your nose after a commute across town, much of which tends to be spent uncomfortably close to a stranger’s armpit. I know, glamorous right? So what could be more attractive than a record shop situated along an idyllic canal walk, when you’re relaxed enough to actually enjoy rifling through the (beautifully curated) vinyl on offer? The Record Deck is a floating music shop that pops up, usually along the River Lea or Regent’s Canal, to offer Londoners enjoying a weekend stroll the chance to add some music to their day, as someone once said. Necessity dictates that the stock is all about quality rather than quantity – but there’s always been something that catches my eye. And it’s run by a fella who is clearly a real music fan – he knows his stuff inside out, and prices are reasonable. It’s certainly barged its way into my affections. All aboard! – Jamie Atkins, Record Collector Magazine

Haven’t tired of digging yet? Get along to Crate Diggers London Record Fair and After Party on September 30!

dharmachine
Jeffrey Smith is the Director of Communications and Partnerships at Discogs. Prior to joining Discogs in 2017, Jeffrey founded the boutique music PR firm Crash Avenue in 2004.
Discogs Profile
1 Comment