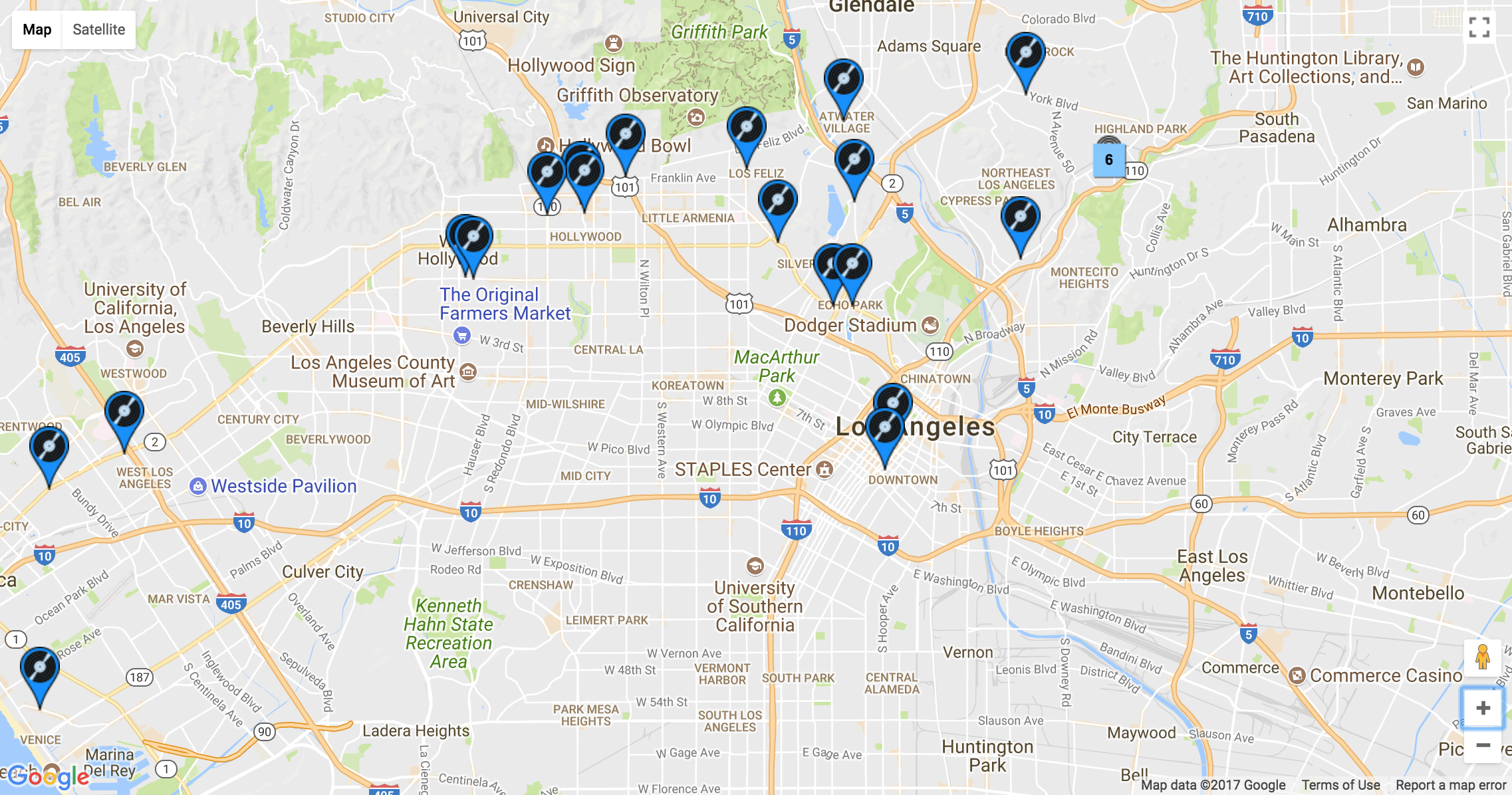 We give you… The Best Record Stores In Los Angeles! 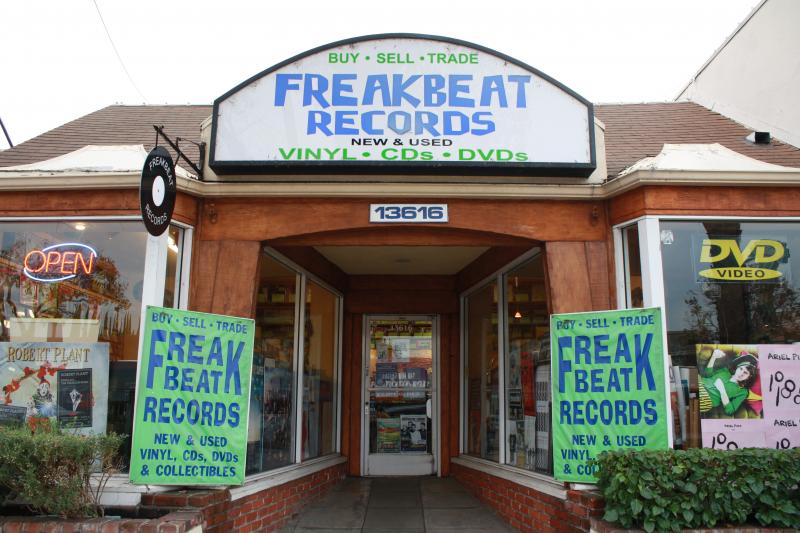 The vinyl at Freak Beat can spoil even the most dedicated of crate diggers. Not too big, not too small, with bins that turn over weekly — psych, prog, new age bump up against dance 12-inches, jazz and “The Punk Special of the Day” — the Valley’s venerable mainstay on Ventura Blvd in Sherman Oaks is the best place to come back to over and over again. – Shirley Halperin – Executive Editor Music, Variety 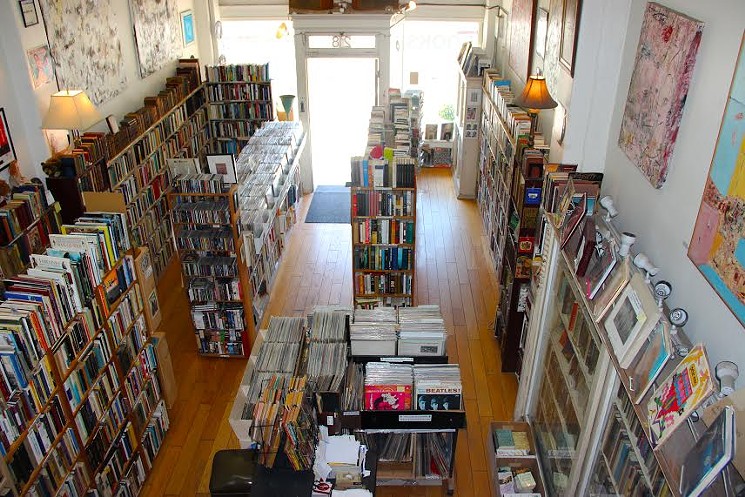 Santa Monica has few remaining institutions that are still intact. You’ve got The Golden Bull, Chez Jay’s Restaurant, Rae’s Diner and McCabe’s Guitar Shop, all of them established in the fifties. In 1998, Rocco Ingala opened Angel City Books & Records, a refuge from the pilates/brunch culture that has deluged the Westside of Los Angeles. Located in a tiny storefront off Main Street, visitors will enjoy squeezing their way through this cramped, eclectic enclave. Expect a small but well-curated collection of vinyl, particularly Jazz and Blues, 1st edition poetry books, classic novels and even cassettes to play in your 1989 Toyota Pickup Truck. As a kid who grew up with twenty-thousand vinyl in the house (my Dad was a collector) you can take my word for it, this place is special. – Robert Francis 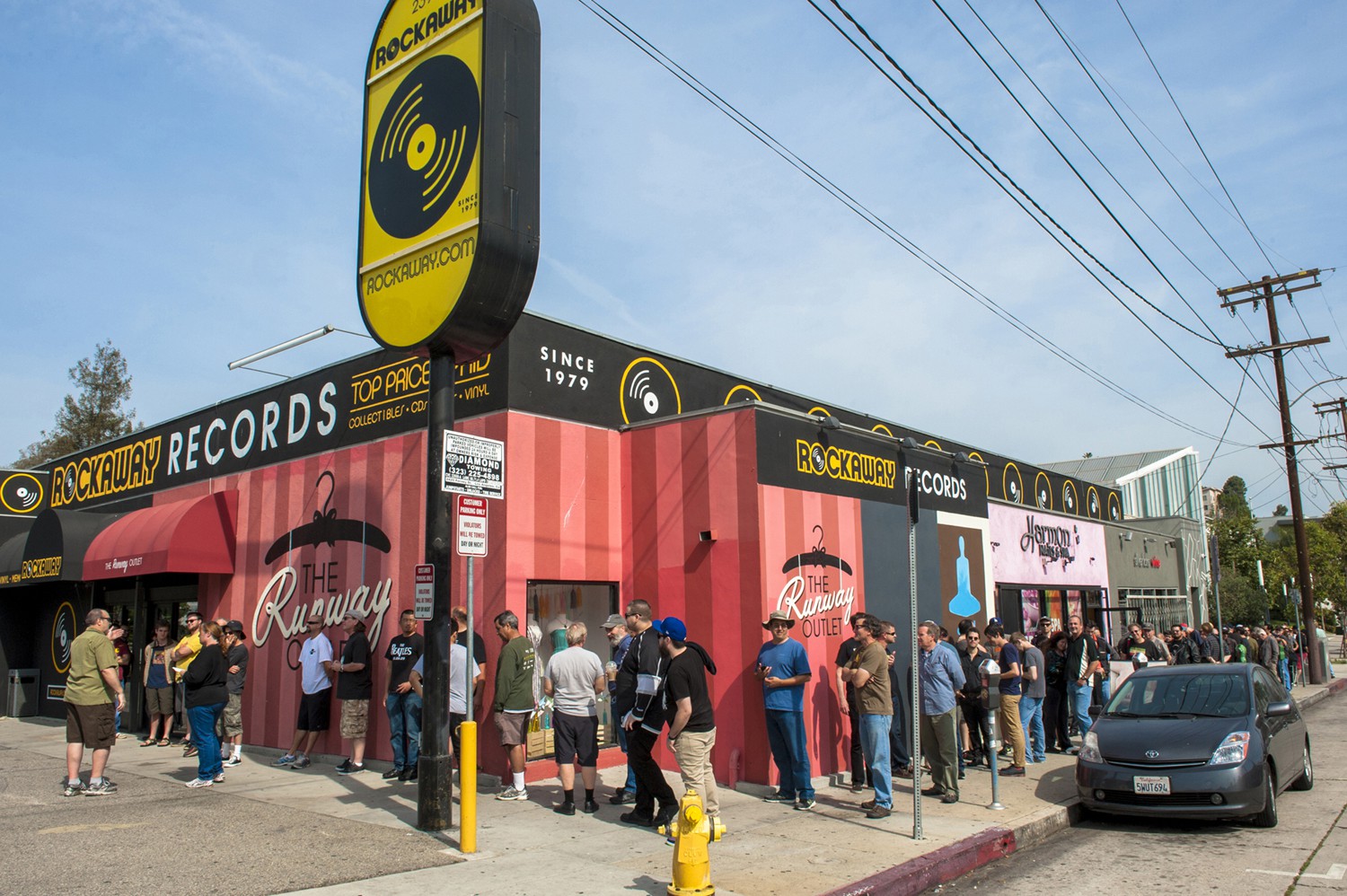 I’ll be honest. Record stores have never been a favorite place of mine. Weird, I know, considering I’ve been a music critic for most of my career, and now you’re reading this on a thread devoted to, well, crate digging. Don’t get me wrong, I’ve always loved the quest — discovering new music via mixtapes, college radio, clubs, online, etc. The city’s billion hole-in-the-wall venues (The Palomino, Spaceland, The Smell) informed a lot of what I grew to love and hate as a music fan and critic.

But aside from the thrill of the find at a garage sale or thrift store, I avoided shopping for CDs or vinyl at the smaller record stores, even though they often had the new, hard-to-find or weird stuff I was interested in. There was a sort of bro culture there, an indie rock snobbery, a hip hop aficionado thing. The wildly creative DJ (always a guy, always seemingly accompanied by a long-suffering girlfriend) had rare beats to excavate, and you were in his way, no doubt buying something he’d never be caught dead with. Please read Nick Hornby’s “High Fidelity” if you’ve never experienced such a thing.

Granted, I don’t shop physically for music as much as I used to (yes, I stream, shoot me), but when I do, I still like to go to Rockaway Records. L.A. shops there, meaning everyone – people who buy bad Foo Fighter’s best of CDs, classic Charles Aznavour LPs, Kamasi Washington on vinyl and all other sorts of sub, sub stuff that I’m way too out of the loop to even know exists until I trip upon it or ask my super knowledgeable co-workers, Randall Roberts and August Brown. – Lorraine Ali, Television Critic, Los Angeles Times 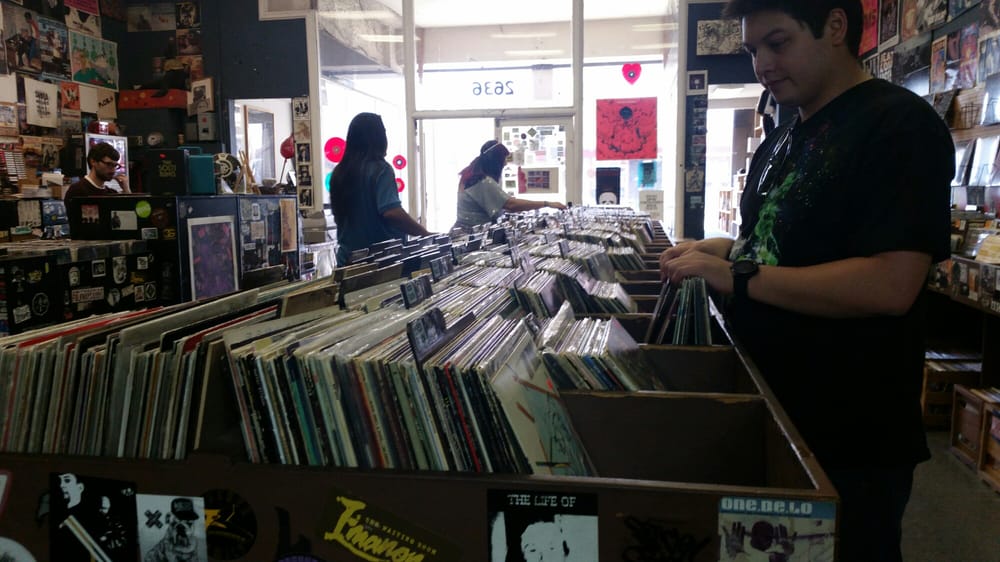 When I started getting back into record collecting a few years ago, I was immediately drawn to Poo-Bah by its history and its relative seclusion from L.A.’s hipster triangle (Echo Park/Silver Lake/Highland Park) where prices tend to be steeper and the used bins get picked over much more quickly. Poo-Bah dates back to 1971, when it hosted performances by the Los Angeles Free Music Society and other experimental musicians; they still have photos on the walls of LAFMS smoking joints and jamming in the store’s original location. The new owners honor that history with a great experimental music section, especially releases from L.A. beat scene labels and artists like Brainfeeder, Leaving, Sun Araw, Ras G and Samiyam. They also have great used rock and jazz sections, well-priced major new releases and, randomly, the greatest easy listening selection in town. I’ve scored everything here from the limited-edition Bowie “Blackstar” vinyl to a first pressing of Louis Prima‘s “Blast Off!” – Andy Hermann – Music Editor, LA Weekly

Amoeba Music in Hollywood is definitely the best record store in L.A., possibly the best anywhere. It’s huge. They have everything. Vinyl, CDs, cassettes, movies, posters, and a 7-inch area with boxes of different genres. I highly recommend the Emo box. It has everything from Jawbreaker to Elliott Smith. I once ditched high school and spent five hours in there. For some reason, there are always a ton of cute dogs there. Go to Amoeba, buy a bunch of records, and when you walk out, take a right and get the double chocolate cookie at Stella Barra. – Phoebe Bridgers

As a R&B and hip-hop head, Amoeba Music is the holy mecca — especially when searching for vinyl. Where else can you snag a copy of Beyonce‘s “Lemonade,” old Eazy-E Macola pressings and a mint condition of Diana Ross‘ “The Boss” in a single visit? Sure, it’s always stuffed with customers and there’s cooler mom and pop shops around town, but when I’m in the mood to crate dig for hours, this is my go-to. – Gerrick Kennedy – Music Writer, Los Angeles Times 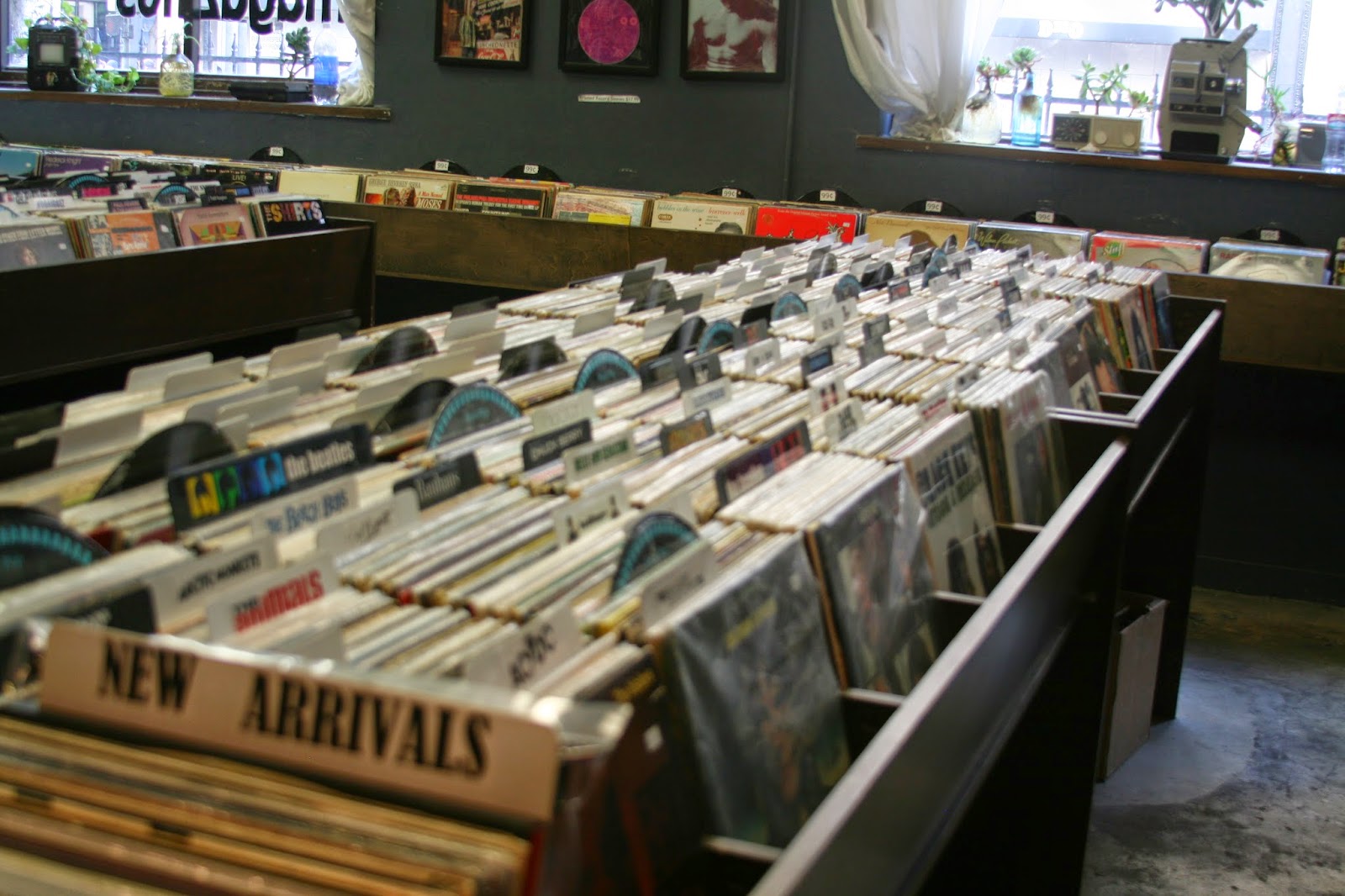 This 22,000 square foot store in downtown Los Angeles is a living shrine to the tactile. The three story emporium houses hundreds of thousands of new, used and rare books and tens of thousands of new and gently used vinyl of all genres. Enjoy that delicious library smell while spending a few hours browsing the bookshelves and expertly selected, and reasonably priced, record collection. (There’s also a vinyl buyer in in the store Wednesdays through Sundays for those with music to sell. Call ahead for hours.) An antidote to the often anticlimactic sterility of digital music and corporate vinyl sellers, The Last Bookstore is independently owned, whimsically designed and smartly stocked. They also stay open late — until 10pm Monday through Thursday and 11pm on Friday and Saturday. Parking can be tricky, but if you don’t score a metered street spot, there are several paid lots in the surrounding blocks. It’s worth the effort. – Katie Bain – Music Writer, LA Weekly 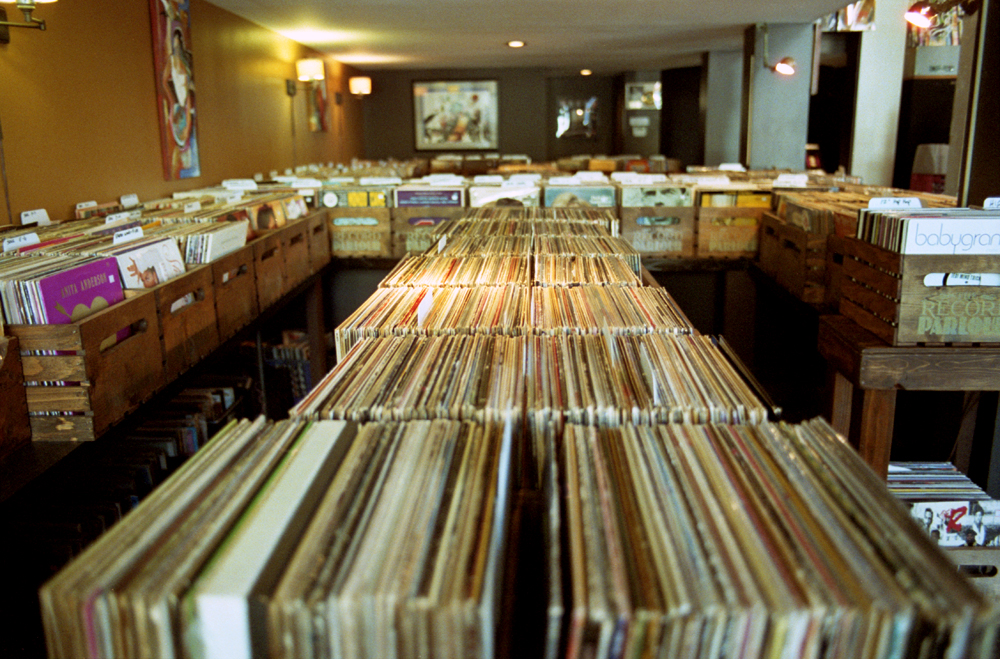 “There are some perks when it comes to working in radio… we get sent tons of promotional items and lots of vinyl in the mail, but there is a record store that I support called The Record Parlour. The store is located just a stones throw from the mighty Amoeba in Hollywood. I stop by The Record Parlour regularly before seeing artists play at The Hotel Cafe, which is located just around the corner. One little known thing about this record store is that in the back of the retail area there is a nice sized event space called The Americana Lounge, lined with vintage pinball machines and jukeboxes.” – Marc “Mookie” Kaczor – Music Director, The New 88.5 FM 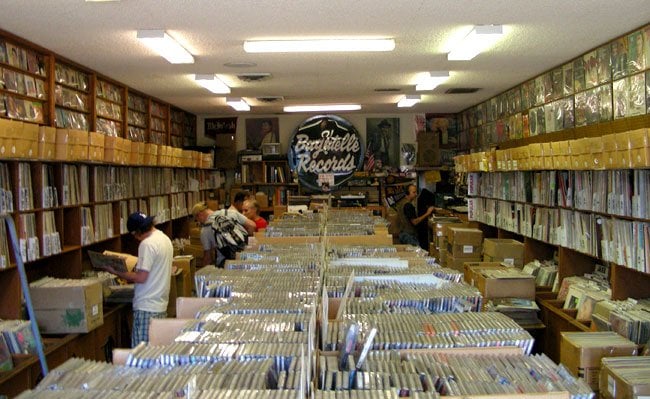 Bagatelle‘s is small and packed, with an idiosyncratic organization system that seems unusual at first but totally makes sense once you embrace the logic. The shop is cash only, which feels appropriate to this little vinyl vortex where time just disappears as you scour the heavy boxes of 45s lining the top of the shelves. It’s a great place for vintage records at fair prices and an excellent excuse to hang out in Long Beach. – Daiana Feuer – Bloody Death Skull + Managing Editor, BuzzbandsLA

I feel like the obvious answer here is the Amoeba but my personal favorite record shop is Permanent Records on Sunset in Echo Park. It’s a small narrow space, nothing like the warehouse that is Amobea, they are solely vinyl and 100% geared towards my taste in music. They have a huge locals section which is always fun to dig through to remind yourself of how much music there is out there and how much of it you aren’t aware of. Sometimes I’ll grab a few random albums of bands I don’t know chosen entirely on album art just to see what’s going on in my city musically. You know, keep up with the kids. They also have sweet, intimate in store performances. My favorite was Single Mothers acoustic before their show at the Echo touring on their album “Negative Qualities“, just Drew and a guitar. It was rad, there were about 15 people, 5 songs acoustic and another great afternoon spent at Permanent Records digging through crates and listening to some tunes. – Leah Hobbs – Writer, Collide 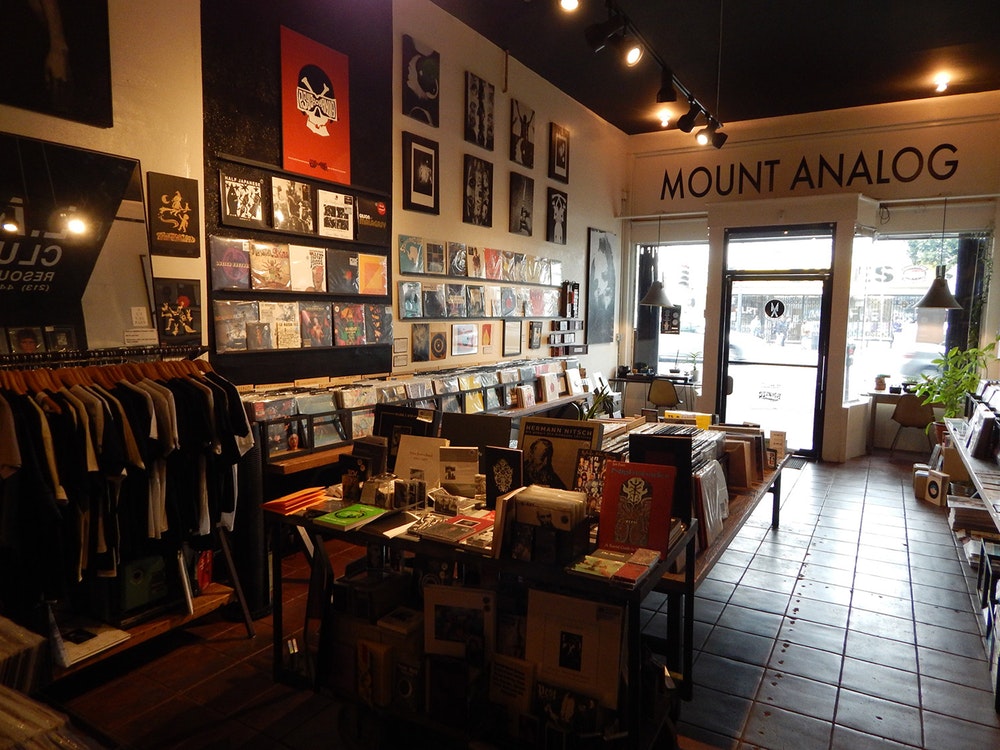 Sometimes the avid vinyl hunter tips off the deep end. When this happens, they wake up at the front door of Mount Analog with an armful of wax that would make even the most dedicated music listeners shake their heads in bewilderment. Mount Analog is no Amoeba music, nor is it your run of the mill mom and pop record store. Mount Analog represents the latest, and most intensive wave of record stores: the specialty vinyl shop. If someone wants a record that they can’t seem to find in the “Unusually Experimental” section in the back of Amoeba, then this has to be their first stop. Only the most dedicated listeners of experimental music will have a hope of navigating the small Highland Park store, but those who find their way to the front door have found their new favorite place on Earth. A tiny cave of noise, psych rock, and ambient, just waiting to be explored. – Drew Pitt – MXDWN

Mount Analog is such a counter-intuitive techno/goth/experimental store. The more obscure, challenging and niche they go in their selections, the more popular they seem to get. Even I’m a little intimidated to go in there sometimes, but they’re L.A. best example of trusting your taste and knowing your audience will follow. – August Brown – Music Writer, Los Angeles Times

Haven’t tired of digging yet? Get along to Crate Diggers Los Angeles Record Fair and After Party on October 14!

dharmachine
Jeffrey Smith is the Director of Communications and Partnerships at Discogs. Prior to joining Discogs in 2017, Jeffrey founded the boutique music PR firm Crash Avenue in 2004.
Discogs Profile
3 Comments