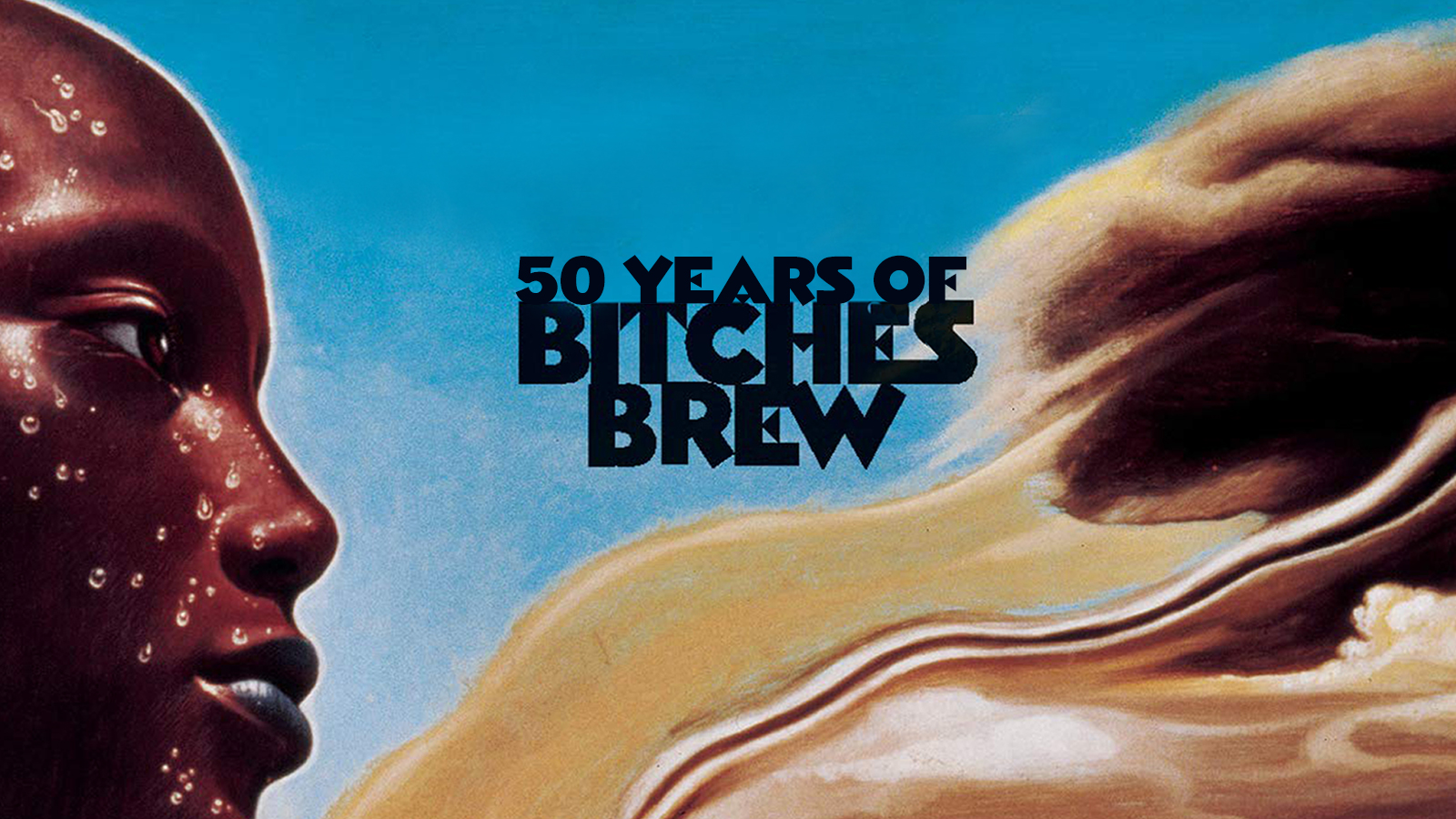 Throughout its early history, jazz depended on in-the-moment interactions made by human beings in real-time. As the 1960s wore on and The Beatles and The Beach Boys crafted lush, multilayered studio works that couldn’t be replicated live, America’s Music remained the stuff of physical bodies in space.

In the double-LP’s sidelong opener “Pharaoh’s Dance,” Davis and his 14-piece ensemble — including keyboardist Chick Corea, bassist Dave Holland, and guitarist John McLaughlin — stir up ominous dust-devils of sound until a decaying note (sampled from a different roll of tape) interrupts them. Within a minute, that audio splice repeats as if the LP had skipped.

A “chopped-and-screwed” album two decades before the term existed, Bitches Brew‘s innovations got the ball rolling for hip-hop, techno, ambient music, and other nascent genres. Reassembled from sliced snippets of tape and hard-panned to disorienting effect, it wiped clean and redrew what recorded jazz could be — and today (March 30) marks the classic album’s 50th anniversary.

Back in 1969, Davis was bored to tears by generic jazz, preferring the rock-and-soul of Sly and the Family Stone, Jimi Hendrix, and James Brown. Inspired by the burgeoning youth culture, he decided to lose his conservative sweaters and slacks and — with the help of his then-wife, soul and funk singer Betty Mabry — fill his closets with psychedelic threads.

Meanwhile, Teo Macero, Columbia Records’ producer since 1957, had worked with Davis on boundary-nudging albums like 1960’s Sketches of Spain, 1961’s Someday My Prince Will Come, and 1968’s Miles in the Sky. (To say nothing of Charles Mingus’s post-bop masterwork Mingus Ah Um and the Dave Brubeck Quartet’s innovative-yet-commercial Time Out, both released in 1959.)

Davis and Macero’s fruitful partnership started to crest with 1969’s In a Silent Way, a dark, droning fusion album recorded in a day that slouched toward ambient music. Foreshadowing “Pharaoh’s Dance,” “In a Silent Way/It’s About That Time’s” beginning and end consisted of the same sample — which, to at least one journalist, came off as an error.

“The editing [is] horrendous,” Martin Williams wrote in a New York Times review of In a Silent Way in 1970, protesting “Through faulty tape splicing, a portion of the music event gets inadvertently repeated at one point.” Miles Davis – In A Silent Way

Craving an evolutionary step from In a Silent Way, Davis began writing rudimentary melodies for three pianos — the more basic the contents, the easier they could be messed with. “I used to think when I was doing them how Stravinsky would go back to simple forms,” he wrote in his 1989 autobiography Miles, evoking the inflammatory Russian composer’s usage of traditional structures in the 1920s.

Let’s Go Back To Studio B

Stravinsky was famous for stacking disparate rhythmic strands to chaotic effect, another technique Davis incorporated in his new sound. Six months after recording In a Silent Way, Davis brought his outsized band, including two bassists, two to three drummers, and two to three keyboardists, back to Columbia Studio B in New York City for three days of tracking.

Keeping in the tradition of 1959’s Kind of Blue and In a Silent Way, which were barely outlined before their recording dates, Davis brought in sketches instead of full-fledged compositions. “I told the musicians they could do anything they wanted [on Bitches Brew],” Davis wrote in 1989’s Miles: The Autobiography. “So that’s what they did.”

“If we used any notation, it was often a collage-type thing with a bass line and some chord movements,” bassist Dave Holland explained in Paul Tingen’s 1991 book Miles Beyond. “His approach was that if he needed to tell someone what to do, he had the wrong musician.”

“Often, I didn’t know if we were rehearsing or recording,” he continued. “But Miles had a policy of recording everything.”

As the musicians vamped on strange fugues and motifs, Davis kept one ear bent to how the results could be edited later. “If I wanted something else in a certain spot, I would just bring the musician in, and we would just do it,” he wrote in Miles.

“When I didn’t have something and I wanted it, I’d go two sessions before or five sessions before, because I remembered a couple of good tracks,” Macero explained in a video interview posted four years after his death. “I used to have stacks of tapes in the editing room.”

Method To The Madness

The producer had a method to his madness, though, sequencing the snippets on “Pharaoh’s Dance” in a neat ABCBCABC structure. “I could drop this out, put that in, add this, add that… with all the machines I had at my disposal,” Macero said in the clip.

“A couple of people came into the studio and said, ‘This stuff is dynamite,'” he continued. “I said, ‘I know. [But] when we’re finished with it, it’s going to be even better.'”

Bitches Brew‘s 26-minute title track was carefully stitched together from no less than 22 disparate parts, with Davis’s rasped directions (“Keep it like that!” “Keep it tight!”) reverberating in the background.

In contrast to the highly manipulated “Pharaoh’s Dance” and title track, Davis and Macero let Bitches Brew remaining tracks — “Spanish Key,” “John McLaughlin,” “Miles Runs the Voodoo Down,” and “Sanctuary” — remain relatively untouched. (“Voodoo” is the only start-to-finish, unaltered take on the album.)

Even still, like the rest, these tracks exhibited extreme stereo panning by Macero, with bassists Holland and Harvey Brooks and drummers Lenny White, Jack DeJohnette, and Don Alias sparring from the right and left speakers — another wholly alien sound on a jazz LP.

“I knew we had something,” a grinning Macero insisted in the video interview, “with all the electronics and the gimmicks.”

Not that the musicians fully knew it at the time. After wrapping up tracking on Bitches Brew, Zawinul laid his true feelings on his boss. “I don’t like that stuff at all, Miles,” he admitted. “It’s too much noodling around, you know.”

What The Hell Is This?

“And then, much later on, I [went] to CBS and the lady working there was playing this incredible music in her office,” Zawinul told author Ian Carr in 1998’s Miles Davis: The Definitive Biography. “I said, ‘What the hell is this?'”

“What the hell is this?” he remembered the employee retorting. “This is you and Miles and John and everybody on Bitches Brew.”

“That’s where I heard it, in San Francisco, sitting in a car on the radio,” Maupin later told the blog The Last Miles. “I was blown away by it.”

If the music hadn’t been manipulated and warped in post-production, it’s hard to say whether it’d still be a classic. But on Bitches Brew, Davis, Macero, and the ensemble both defined fusion and opened portals to new musical worlds — all by using the studio as a jazz instrument.

Interested in seeing more articles like this one?
How about getting information about the Discogs Limited-Edition Radar?
Subscribe to Discogs Partner Offers for access to exclusive and limited edition vinyl, new/reissue releases, contests & more.
Want to join the Discogs community of music lovers?
Sign up for an account here.
Return to Discogs Blog
Tags: 1970anniversaries
4 Comments