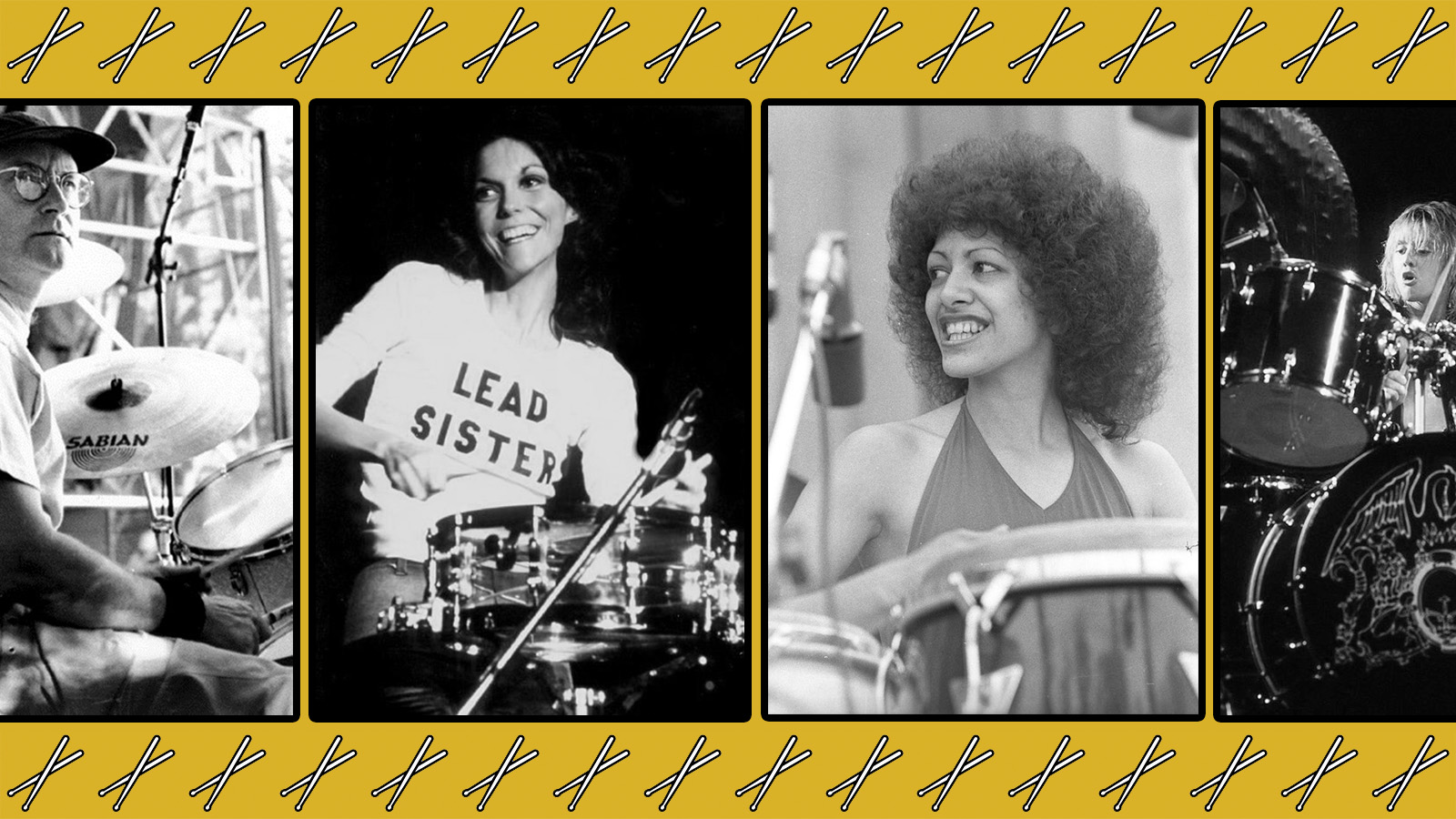 Mastodon drummer Brann Dailor belongs to an unusual breed in rock music: the kit player who also sings. It’s not an approach that came naturally at first. Rather, it manifested itself out of expressive necessity for songwriting and led to real contributions.

Whenever Dailor had vocal ideas for Mastodon songs, he would go in and vocalize his ideas, then Brent Hinds or Troy Sanders would sing their proper version of it for the official recording. But as the drummer notes, their fourth album, Crack the Skye, “got a little less heavy for us and we got a little more proggy, and the tones changed a bit guitar-wise. It left some space for more of a creamy, dreamy vocal timbre.”

When he sang out his ideas for the song “Oblivion,” his bandmates liked it and encouraged him to learn the vocal parts so he could perform them live. Dailor recalls that against the protestations of producer Brendan O’Brien, who did not want a drummer singing on the opening cut of an album, the group preferred his rendition to what Sanders laid down.

“That opened a can of worms for me, I guess, and made it so now I’m the singing drummer guy,” quips Dailor. Since then, he has sung on numerous tunes through the band’s recent catalog. The Atlanta-based metal quartet is highly unusual in having three of their four members sing lead.

“I guess the stuff I sing is a little more on the poppy side of music anyways because I don’t have that snarling, full timbre,” notes Dailor. “My voice is more clear and rough, and you could argue that I ruined Mastodon with my voice,” he jokes. “I’ve read that before. But that’s how I sing.” One can hear some of Dailor’s vocals on the new Mastodon release, Medium Rarities, a collection of rare tracks, live songs, and instrumental versions.

Dailor sat down with Discogs to discuss his favorite singer-drummers, and we came up with this list.

“Phil Collins is one of my favorite drummers of all time. I love his voice. I think that he did such a great job coming in after Peter [Gabriel] left [Genesis]. I like how he sings, and I think that he does a good Peter Gabriel impression. His drumming is incredible. His work on The Lamb Lies Down on Broadway is unbelievable – I rip it off all the time, I take fills from him non-stop. I grew up listening to him. My mom and dad are both Genesis fans, and we were blasting Abacab and Duke at my house. I don’t think his drumming is talked about enough. When people talk about rock drummers, everyone is just like John Bonham. John Bonham, that’s it. No, there’s a lot of other people who need to be in the conversation and one of those people is Phil Collins because his contribution is massive. ‘In The Air Tonight’ is a magical moment, you know? It’s rolled into the pop culture lexicon like no one saw coming. I thought Miami Vice was gonna be it for that song, but it just has had this whole other life now, [like when] Mike Tyson punched somebody in The Hangover.”

“She’s a pretty amazing singing drummer. First of all, she rips on the drums and she’s got an incredible voice, such a mournful quality. You can just feel the pain of her existing with her vocal approach. Then the fact that she’s playing this huge drum set, this huge chrome kit in a time where it was not [considered] very feminine to play the drums. I’m guessing it was very frowned upon to be a female and want to play the drums. I think a lot of parents were discouraging that. ‘You’ll never get a husband if you play the drums!’ I think she’s really great. It’s a sad, sad story [about her death]. I’ve gone into some YouTube wormholes of The Carpenters and just watched everything that I could. I would highly recommend it if you have the opportunity.”

“He’s awesome. We got to play with [Night Ranger] in Sweden a few years back. And we had a little brodown with those guys that night. He and I talked about singing and playing – you can either do it or you can’t do it. That’s pretty much what it boils down to. If you can’t do it, you just can’t do it. He is a force, for sure. He is very well in control. He is a hard hitter and on top of it, a little bit ahead of it. He’s driving all of it which is where you want to be when you’re playing rock drums.”

“’Black Diamond’ is pretty amazing. I like his makeup. If you play drums and were a child of the ’70s and ’80s, then you went as Peter Criss for Halloween at least one time, and probably Dressed to Kill was the go-to because it was the easiest costume to pull off. It was a suit and tie. You don’t think of him as a singing drummer, but he did a lot of backup and they gave him a song. So that’s pretty awesome and probably one of my favorite KISS songs. He’s just super tasty, had some great fills, and was probably more influential than anybody gives him credit for. Quintessential arena rock playing.”

“’I’m in Love with My Car’ is pretty awesome. When that song comes on, people don’t even guess that it’s Queen. There are a lot jokes out there about drummers not really being musicians, but there are so many examples. I never paid attention to all that. I’ll say that people like Neil Peart and Phil Collins were the influences for myself feeling like I was allowed to be a musician and play the drums. I can contribute vocals and lyrics, and I have ideas. Why am I not included in this conversation because I hit things with wood? I’m an artistic person. I can express myself, and it matters.

Roger is a pretty incredible player. I admire restraint sometimes with drummers, their ability to know when to say when and understand serving the song, which I’ve tried to do over the years. I get in my own way sometimes. I think he did [show restraint] here and there, but he was also flashy and had lots of cool fills and cool ideas. I think he really expressed himself as an artist on his drum kit.”

“I love his playing. He’s an awesome drummer. I love his work with Queens of the Stone Age, and I love Nirvana. He did some background vocals. I think he doesn’t tend to sing and play a lot, but what I like about his voice is it has a cool, unique characteristic to it. He knows how to belt out a really great chorus, and he just has a great understanding of how to build a great rock song. I would imagine that a lot of people, after what happened to Kurt [Cobain], just thought that the other two guys were just going to maybe fade into the distance. I don’t think anybody nobody saw that coming – the drummer is going to be in one of the biggest rock bands of all time. I think that’s quite a feat. ‘Everlong’ has to be in the conversation when you’re talking about great, great rock songs.”

“She is just an incredible performer, singer, and drummer. I like her style. Some of that Latin-style percussion and drumming is so otherworldly to me. It’s hard. It’s a whole other part of your brain to access. That kind of stuff is really, really incredible, and she’s super, super talented. I’m glad to see she and Prince crossed each other’s paths because they made the world a better place, I think.”

“He’s got a great voice, so recognizable. Pocket and groove. He’s not a super busy player and didn’t need to be and shouldn’t have been. But it opened up an opportunity for him to be able to sing the way that he does. He’s keeping things moving. ‘Hotel California’ – that opening when the drums come in, that little simple, boom, boom, it’s so iconic. It’s just a simple little phrase, but it’s perfect.”

“What a cool voice. He makes me think of some old dusty saloon or something, listening to him sing. There’s such a deeply wrinkled character to his voice as if there’s a wisdom in there that’s palpable. He’s got that deep, deep groove and pocket.”