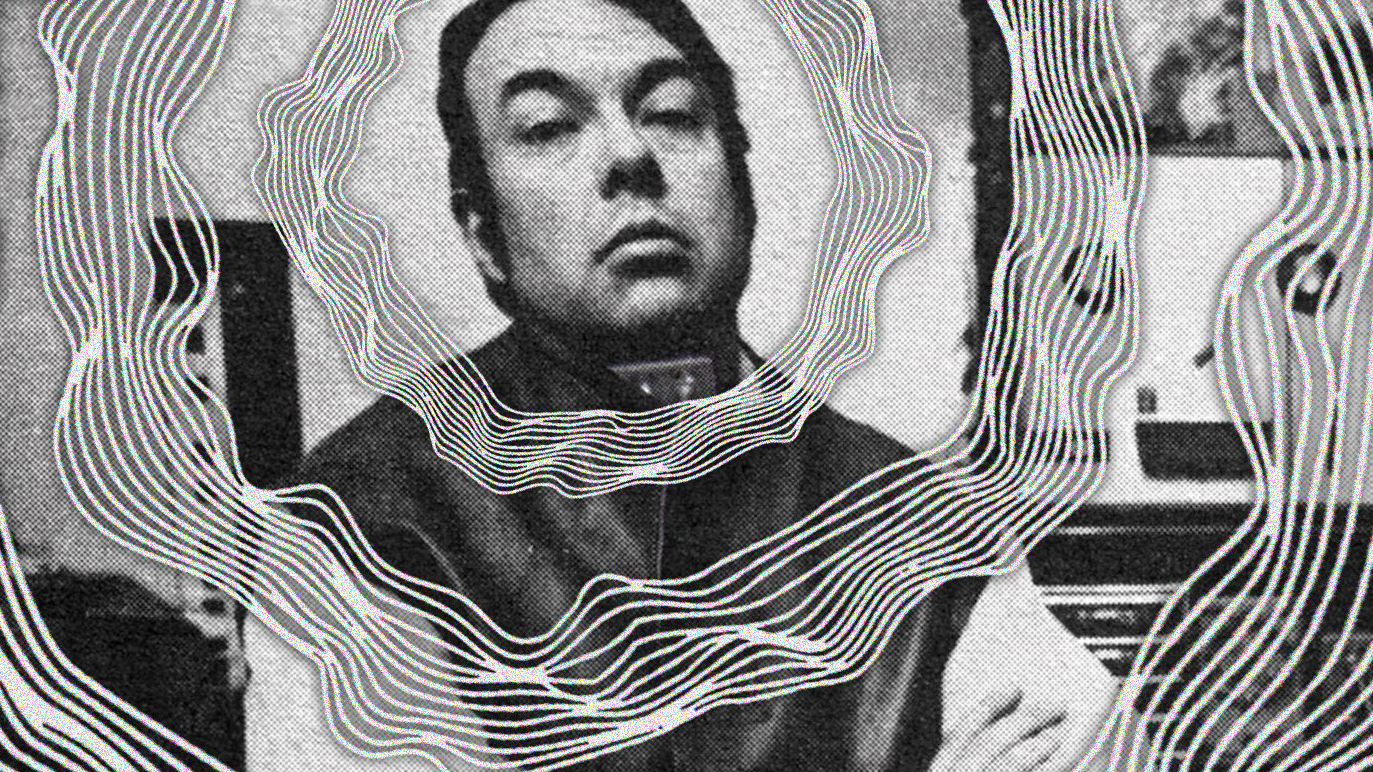 When he was about 10 years old, Peter Price heard some classmates bragging that they were on an album. A far-fetched notion at any point in the history of recorded sound, but for a young man growing up near the township of West Chester, Pennsylvania in the mid-’70s, the idea seemed downright extraordinary.

Price had to hear it for himself and tracked down a copy of Ebenezer Electric, a dodgy looking album with a stark black and white cover that, in rough typewritten script, promised to be “a musical re-telling in song, narration, dynamic electronic music, and audience-movement-participation of Charles Dickens’ A Christmas Carol.”

The kids in question could be heard on a handful of tunes — a chorus of vocalists singing original holiday songs that featured interjections by a woman who encouraged listeners to jump and move around.

Hearing his friends was exciting enough, but what stuck with Price was the music. The melodies were squiggly and strange, as if produced by a ray gun, and the rhythms sounded like they were produced by shaking sheets of tin foil. “That album gave me a whole conception or idea of electronic music,” Price remembers, speaking recently from his home in Philadelphia. “I don’t know if I would have come to it some other way. It probably wouldn’t have happened if it wasn’t for that initial context as a kid.”

His experience hearing Ebenezer Electric was, in part, what inspired Price to devote his career to electronic music and composition. But that album also lit the path that wound up leading him to his work managing the estate and the legacy of one of the men behind that record: Bruce Haack.

Listeners and fellow artists have found their way into the unique sound world that Haack created ever since he released his first album in the early-1960s. He was a pioneer of electronic music, building his own quirky instruments and experimenting with sound on a series of idiosyncratic and psychedelic albums meant for children. Along the way, he scraped the edges of fame with appearances on popular TV shows like I’ve Got A Secret, The Tonight Show, and Mr. Rogers’ Neighborhood, as well as his sole major-label release: 1970’s bizarre and fascinating The Electric Lucifer.

But as Haack became less and less interested in becoming a mainstream artist and retreated to a West Chester basement apartment in the home of his friend and collaborator, Ted Pandel, his music started to fade from view. It’s only been over the last 25 years or so that a parade of record collectors and electronic music enthusiasts have put a concerted effort into rescuing Haack’s work from obscurity.

Several record labels, including Stones Throw, Emperor Norton, and Australian imprint, the Omni Recording Corporation, have reissued Haack’s work in various forms. L.A. filmmaker Philip Anagnos produced a documentary about the artist, dubbing him in the title King of Techno. In 2005, a tribute album to Haack was released featuring covers of his work by Beck, Eels, and Stereolab, among others.

More recently, a theater director in New York turned Electric Lucifer and its sequel (released posthumously through Q.D.K. Media) into a stage musical. Even more recently, Haack’s work received a sizable boost when his song “Snow Job” was sampled by Kanye West on “Water,” a track from the rapper’s 2019 album Jesus Is King.

Yet, even with all of this high-profile attention, Haack remains a cult figure rarely discussed in the same breath as his contemporaries like Morton Subotnick or Silver Apples. But, in Price’s view, that could soon change.

“I think people are learning more and more about what Bruce was doing,” he says. “And there’s still so much more to learn about the different ways in which he was working outside his circumstances—in the basement of a suburban house, going into some conceptual spaces that really haven’t been unpacked yet.”

Haack’s path to that suburban house in West Chester was not the easiest or most deliberate journey either. Born in the small town of Rocky Mountain House in Alberta, Canada, he strove to escape the circumstances of his abusive mother by committing himself to music. He taught himself to play the piano and taught his classmates and friends the instrument in his pre-teen years. And as legend has it, during his childhood, he would spend time with the members of a First Nations tribe and somehow took part in their peyote rituals.

He left for Juilliard School in New York in 1954, where he studied composition and, along the way, created musique concrète pieces using splicing together tapes of various recordings. But as he butted up against his own limitations (he never learned to sight-read music) and the rigors of institutional learning, he wound up dropping out.

Haack scraped by for the rest of his time in New York, writing pop songs and Broadway scores with Pandel and getting a bit of commercial work composing jingles for TV ads and for the holiday window display at Macy’s. At the same time, he was working to invent strange electronic instruments that helped bring him his first brushes with fame. He made several TV appearances to demonstrate the Dermatron, a wired-up bracelet that generated sound when its wearer touched another person’s skin. Haack also created the Farad, a vocoder that digitizes the human voice, and an analog synth that looked like a robot.

Where these instruments were primarily heard was on the series of children’s albums Haack recorded with Pandel and his regular collaborator Esther Nelson (or Miss Nelson, as she’s credited on many of them) during the ‘60s and ‘70s and released on their own label Dimension 5. Many of them are interactive, using electronic sounds and loops to encourage kids to move around. Others are just flat-out trippy and goofy, with audio recreations of motorcycle rides or, on 1972’s “Soul Transportation,” offering up instructions for a kind of group astral projection.

“Soul Transporation” appears on Dance to the Music.

As far out as the music got, it was accessible enough for Scholastic Books to commission Haack to create some work for them, including a “musical documentary” about the life of Dr. Martin Luther King, Jr. and a read-along record for Norman Bridwell’s iconic Clifford the Small Red Puppy.

Somehow, Haack also attracted the attention of John Hammond at Columbia Records, which released The Electric Lucifer, an anti-war concept album about a pitched battle between good and evil. Seeking a Switched On Bach-type hit, the label didn’t know what to do with the finished product and struggled with how to market it. At one point, they placed ads for Lucifer in the playbills for performances by the New York Philharmonic.

“They thought maybe there’s a classical music crossover,” says Price. “And I can sort of see the logic of it from what Bruce’s aspirations may have been having failed out of that kind of classical musical establishment more than once by that time already. But there never was a role that made sense for him.”

Haack never seemed to fit comfortably anywhere and was, as Pandel put it to LA Weekly in 2014, “a dependant person.” So much so that Haack followed his friend to Pennsylvania when Pandel got a job as a professor at the University of West Chester, living in a basement apartment in his friend’s house for the rest of his life.

Even after leaving New York City, Haack kept making music, transitioning into more grown-up work like Haackula, an album-length screed about the music industry recorded in 1977 but never released until 2008. The closest he ever got to any kind of further mainstream attention was when he, incredibly, collaborated with Russell Simmons. The future Def Jam impresario co-produced “Party Machine,” a 1982 electro jam that featured Haack’s processed voice shouting out Kurtis Blow and James Brown and stating “Haack Attack is back.” Unfortunately, the musician passed away six years later from heart failure, likely brought on by years of drug and alcohol abuse.

Great as it is to have Haack’s music still in circulation and inspiring people like Kanye, his posthumous discography is a bit of a mess. As labels from around the world started reaching out in hopes of reissuing Dimension 5 titles or Lucifer, Pandel, who was overseeing his friend’s estate, had a tendency to say yes to everyone. Many titles have been re-released multiple times over the past two decades and almost never by the same label.

“Ted just wanted this stuff out there,” says Price. “He never wanted to do anything exclusive. I sort of appreciate how he did business because, ultimately, a lot more people know who Bruce is now than at the time of his death. So he’s done something right.”

The goal now is to try to contextualize and preserve what Haack created during his lifetime. Though physical versions of his musical instruments don’t exist anymore, there are patents and documents describing them, as well as dozens of archival recordings on reel-to-reel and floppy disks that were never released.

Price helped oversee digitizing all the tapes and, with the help of Telephone Explosion, a Toronto label that has re-released Lucifer and a 2018 collection of unreleased Haack recordings (much of it meant for an album of switched-on psalms and hymns to be called Jesus Loves Me), had them placed with the Provincial Archives of Alberta.

“Ted really wanted to make sure it went somewhere in Canada,” remembers Jon Schouten, co-owner of Telephone Explosion. “We got in touch with the archives and explained the situation, and they were freaking out because they were Bruce Haack fans.”

Price doesn’t want the story to end there. He’s already talking with some labels about doing proper re-releases of all of Haack’s Dimension 5 releases and is considering a collection that will be a more broad overview of the artist’s career, including the musique concrète compositions and commercial work. But his ultimate goal with the Haack archives is something far more conceptual.

“The idea is to create a community of people, or what Philip Anagnos would call ‘a telepathic following,’” Price says. “People who felt called to work with his legacy and give them actual material from the archives in hopes of creating hybrid compositional sensibilities. Bruce imagined he had this connection through his music to anyone that would hear it at any time. I like the idea of a musical corporation presided over by Bruce from beyond the grave. To be drawn into the sonic worlds that he creates and be ensnared.” 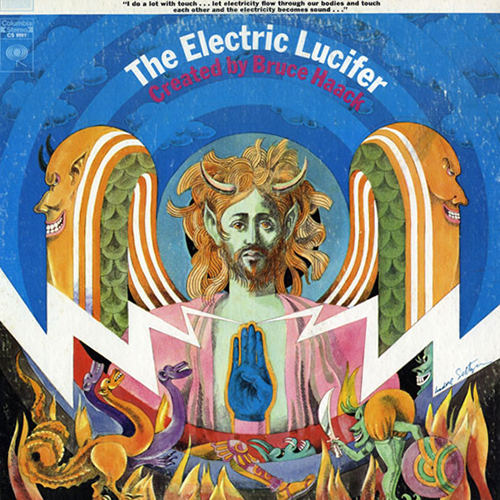 Bruce Haack and Esther Nelson ‎– Dance to the Music (1972) 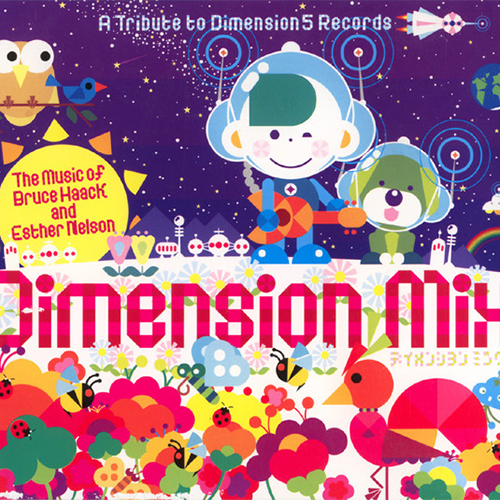