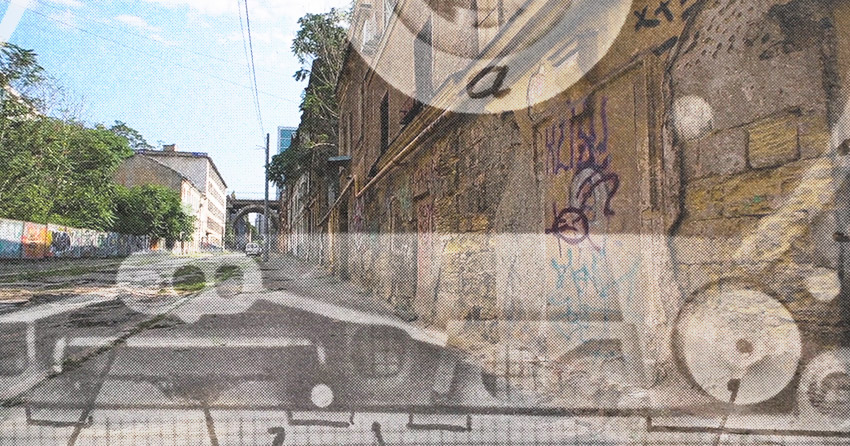 By Zack Taylor, director of Cassette

I drive a 20th century car, but just barely. It’s a 1999 Plymouth Voyager minivan that I inherited from a friend. It squeaks a little when I step on the gas, but the tape deck functions like new. Today I mask the engine’s squeal with a tape from Opening Bell, a post-rock noise band from Brooklyn. At the moment it’s hard to tell where the whining of the van stops and the distorted vocals begin.

Living in Brooklyn, I spend a lot of time on the congested Brooklyn-Queens Expressway, often with the Manhattan skyline in view. This morning as I’m surrounded on all sides by my fellow commuters, I fantasize about being the only one on the road, like Will Smith cruising the abandoned avenues in I Am Legend. I envision the endless network of New York City streets, now empty from some vague virus or natural disaster. And then of course my mind goes to cassettes.

In this extinction-level scenario, what would survive to tell our story? In my drive-time daydream I imagine that the Cloud has long since precipitated our collective memories, and what represents our species is now limited to what’s buried in the rubble. Printed books would perpetuate our literature; records would be the sonic souvenirs of a past-tense populace.

Among these ruins, our cassettes bear strong witness to who we were not just as a culture, but as individuals. Somewhere in the debris is Keith Richards’ half-asleep Satisfaction demo. Elsewhere in this quiet future are the cassettes that hold Bruce Springsteen’s Nebraska.

For those of us who grew up with them, cassettes served as canvases for our music, our voices, and our surroundings. Their spools of ferric oxide made it easy to capture what was important to us, and they survive today as records of the past. They may be in a state of slow decay, but tapes have surprised many with their archival stability. Like it or not, cassettes will continue to prove themselves as meaningful, lasting documents of the lives we’ve led. Our memories cling magnetically to those small pieces of rust and plastic.

Now back to my 1999 Plymouth Voyager as I’m inching my way home on the BQE. I exchange the noise rock for a mixtape that my wife recently made for me. The tape clicks and clacks as I push it into the van’s deck. Textured silence opens Side A, and I wonder how much time my wife took to curate these songs. Mid-tempo, melancholic strings kick off R.E.M.’s Shiny Happy People.

I told her once how much I love that moment where the somber intro yields to an unabashed, joyful pop song. Now here it is again, brightening the expressway and reminding me that my wife is listening — for whatever reason — to all my stupid spiels.

But I am not Will Smith driving a Mustang down a deserted city street; I Am Not Legend. Not yet anyway. It’s the present tense and my cassettes haven’t outlived me yet. This tape rewinds time back to that morning when my wife handed it to me. She grins, both proud and embarrassed. I search through the handwritten track list as the plastic shell passes from her hand to mine. The mix, titled A Tape For Vanny, is already a record of a time, although it’s only recently passed. It tells the story of my life, or at least my life at that point.

Shiny Happy People fades down and gives rise to the screech inside the car’s cavernous hood. Before too long, the tapes in my glovebox will outlive the minivan, leaving me to find a newer car, hopefully with an auxiliary port that I can plug a Walkman into.

Zack Taylor is a New York-based filmmaker. Cassette: A Documentary Mixtape is his first feature-length documentary. It is available worldwide on Vimeo on Demand.