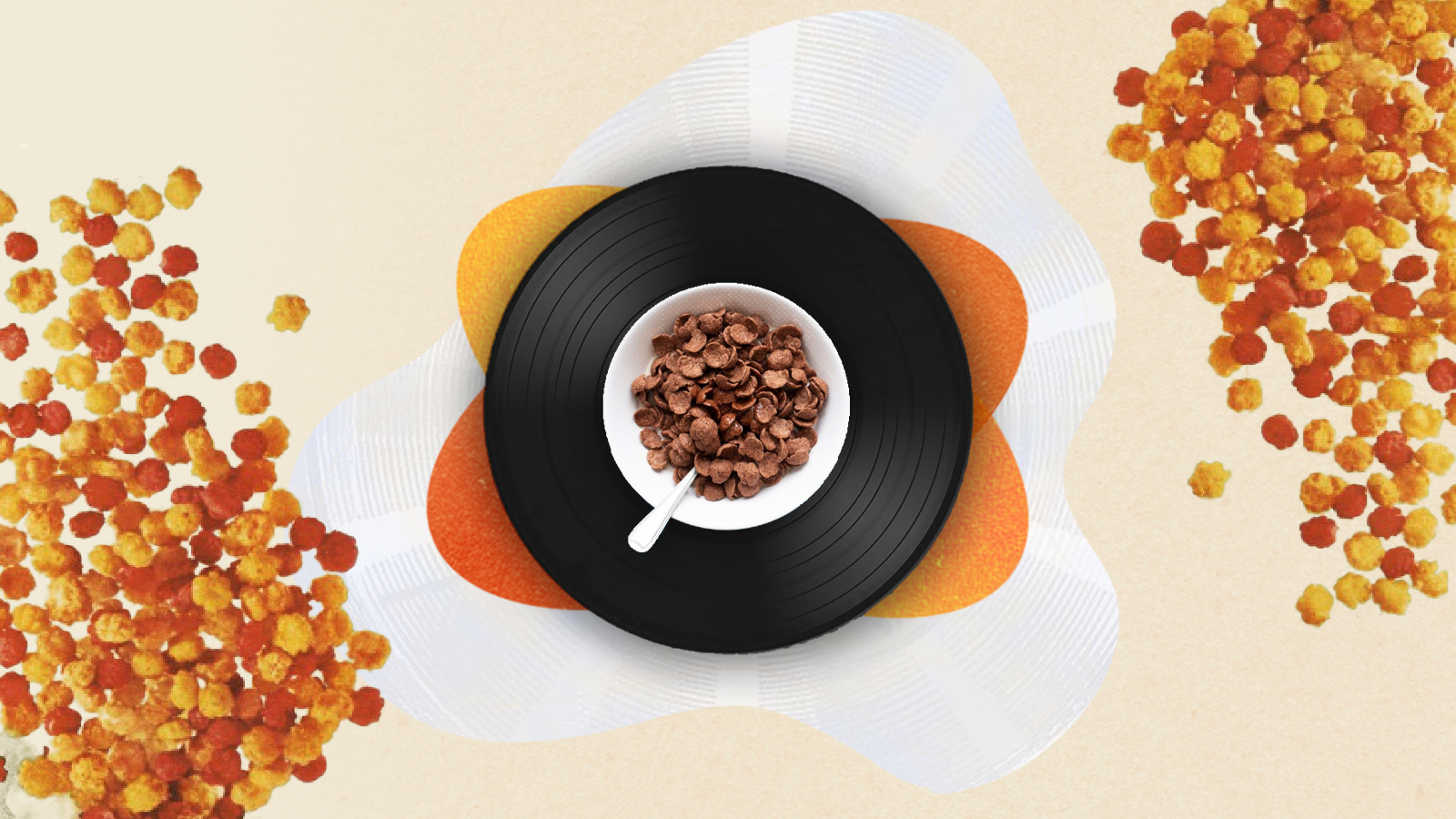 Growing up, my parents never let us buy any “good” cereals. Of course, the definition of “good” for a kid was anything with sugar listed as one of the first ingredients — preferably number one — listed on the make-up of the breakfast treat. Sadly, our house was regulated to Cheerios, Rice Krispies, and, every once in awhile, Shredded Wheat (not the lovely Frosted Mini-Wheats, which literally have a layer of icing-esque sweetness coating). Because of these incredibly stringent restrictions in our house, I never got to delight in many of the delicious delicacies that many of my friends did: Cocoa Puffs, Fruity Pebbles, even “Mikey’s” favorite, Life, were not allowed. So, it is not much of a surprise that I have no memory of the cereal box record phenomena that product manufacturers General Mills and Post, in particular, embraced and perpetuated for a short stint in the 1970s and ’80s. Some were cardboard records cut from the cereal box; others were mail-in offers.

For almost 70 years, General Mills has been collaborating with other entities to entice consumers to pick up their products. The Walt Disney Production 6-inch manufactured by the megabrand in 1951 showcases two songs from the feature-length cartoon the animation superpower released the same year: the theme from Alice in Wonderland as well as the White Rabbit’s personal anthem (which I strangely know, though I have never seen the movie or owned the record) “I’m Late.” Obviously, kiddies would nag Mom to get whatever product included this “prize,” which really was an advertisement for the film. 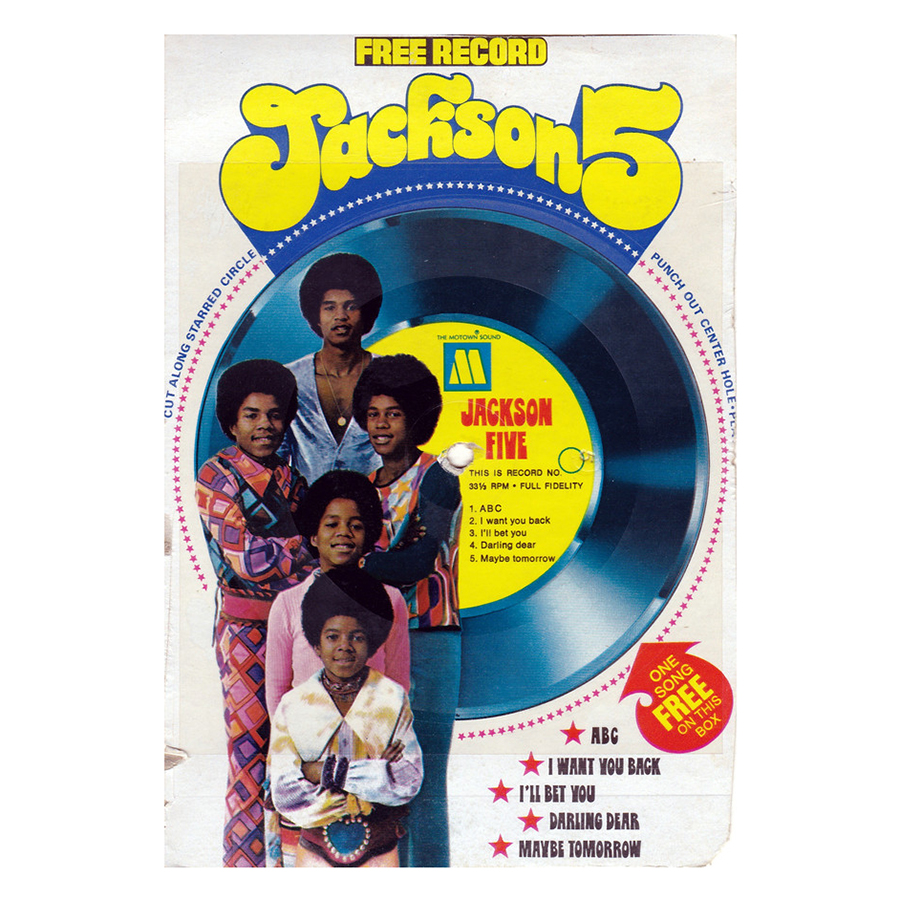 The Disney collabs continued throughout the 1950s. In 1956, select Wheaties had the drawn characters “performing” tracks, with various renditions spread across different boxes creating a collect-them-all mail-in situation. Those lucky enough to get their hands on all the versions would be treated to Mickey Mouse singing “The Gadget Tree”, Chip ‘N Dale crooning “The Laughing Song,” Goofy barking “It’s Great To Be Goofy,” and Donald Duck performing “Donald Duck’s Song”.

However, records were not just for kids. In a coy move, home cooks were also included in the vinyl grocery store revolution. The same year the Wheaties record appeared, boxes of cooking staple Bisquick — sold under the Betty Crocker umbrella — featured a cut-out record. The vinyl this time showcased the many uses for the product- consisting of flour, shortening, salt, and baking powder, with an array of recipes from “Muffins” to my favorite, “Answer Cake,” all having their own track listing. 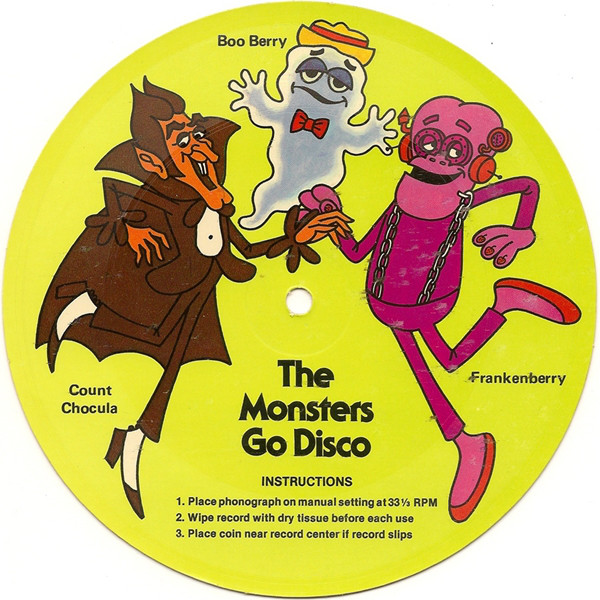 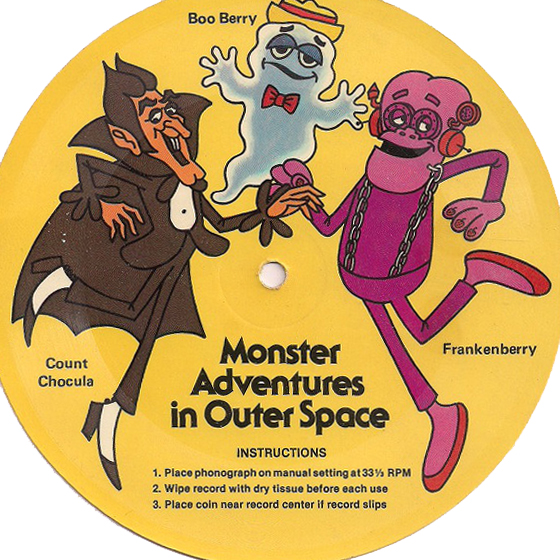 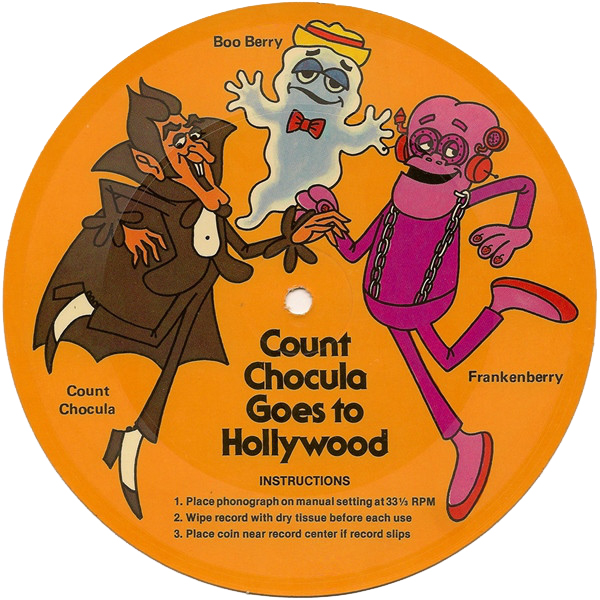 By the early 1970s, General Mills realized that, instead of using someone else’s product and mascots like they had with Disney, they could create and market their own characters directly to kids. The first two cartoon personas- Count Chocula, repping a cocoa-flavored breakfast cereal, and strawberry Franken Berry — were shown in advertisements bickering over who had the better bowlful. The animated shorts fit in seamlessly with other morning cartoons for children, making the ‘monsters entities onto themselves. T-shirts, sheets, and other items featuring what eventually became a trio when blueberry Boo Berry was introduced into the fold in 1973 were omnipresent. It’s no surprise that the gruesome threesome became the stars of their own set of cereal box 45s. Found on select packs of the different horror flavors of breakfast yumminess, the first two flexi-discs feature all of the haunted trinity on The Monsters Go Disco and Monster Adventures in Outer Space. The Count is the only breakout star from the haunted mansion monsters to have his own flexi-disc with Count Chocula Goes to Hollywood.

On the 1979 Disco, our pals Boo, Frank, and Count find themselves “frightfully lonely” on a Saturday night. Hitting the club provides the elixir to their woes, with the friends finding elated bliss on the dance floor:

“I’m so light on my feet, I’ll boogie all night!” [Boo Berry]
“I’m so handsome, all the girls will hustle with me!” [Franken Berry]
“After we learn to disco, it’s goodbye to sitting home on Saturday night!” [Count Chocula] “We will be the most popular Monsters in town!”

The four-minute adventure concludes with the ghouls winning a dance contest and Frankenberry coming away with the new moniker of Franken-Boogie.

Not wanting to be left out of the cereal box record craze, General Mills rival, Post, joined the fad as well. It’s hard to believe now, with the S-word (sugar) being almost criminal to use, that an entire brand of morning munchies featured an amped-up version of the offensive noun in its name. Super Sugar Crisp, like the Monster Cereals, had its own cast of animated cuties; the main character was a blue turtleneck sweater-wearing bear named Sugar Bear. Like any self-respecting breakfast cereal avatar, Sugar had his own band consisting of himself, Shoobee Bear, Doobee Bear, and Honey Bear. Specially marked Sugar Crisp products included several different Sugar Bear flexis. Fun fact: Honey Bear was voiced by none other than Kim Carnes, the blonde songstress who would score a No. 1 hit in 1981 with the smoky scorcher “Bette Davis Eyes.” 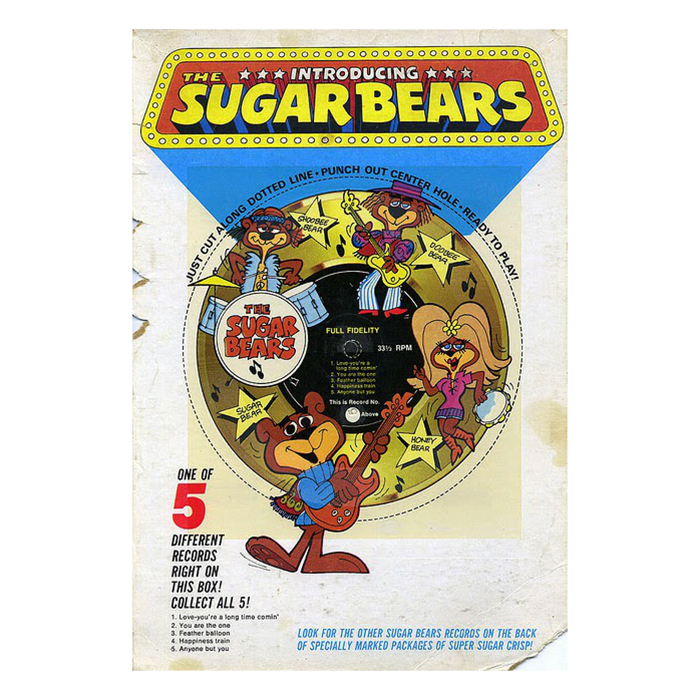 In a precursor of the Olympic Games having McDonald’s as a sponsor, Kellogg’s included on specific boxes of one of their cereals a “workout” record. Kids could first gorge on a bowl of sugary deliciousness, then endeavor to feel the burn with mascot Toucan Sam. Sam’s routine consisted of putting your hands on your head, touching your toes, marching in place, touching your nose, and hopping on one foot.

Post was determined to bring the child consumer along into their tween and teen years. In a bid to expand their target audience beyond cartoon adorableness, the behemoth teamed up with some of the most popular young heartthrobs of the 1970s on several different cereal box flexi-discs. Bobby Sherman could easily be crowned the King of the Cereal Box Record, as he racked up 20 songs in total released via Post. There were four different records available, each with five tracks. Songs included “Easy Come Easy Go,” “Hey Mr. Sun, ” “La La La,” “July Seventeen,” “Bubblegum and Braces,” and “Little Woman,” and appeared across various product lines such as Cinnamon Raisin Bran and Honey-Comb. 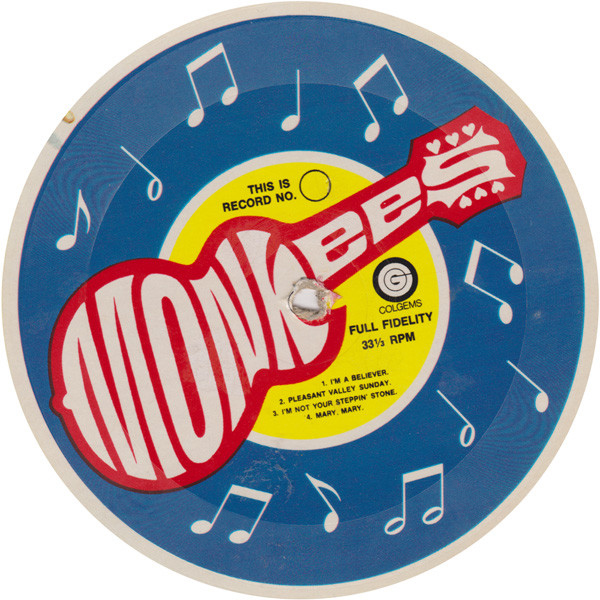 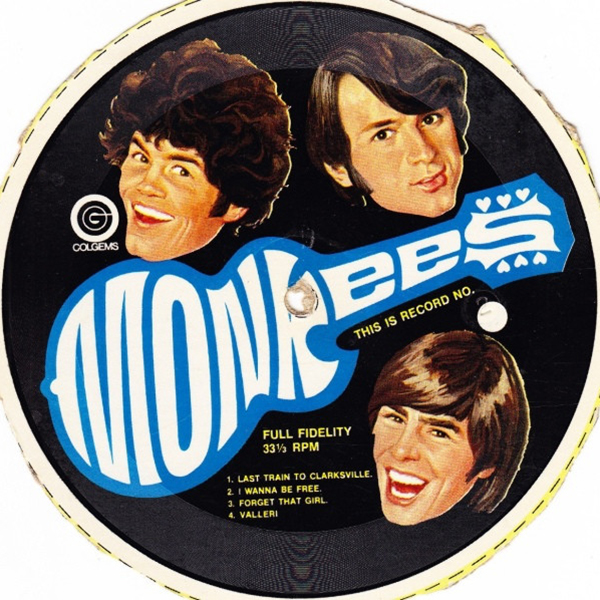 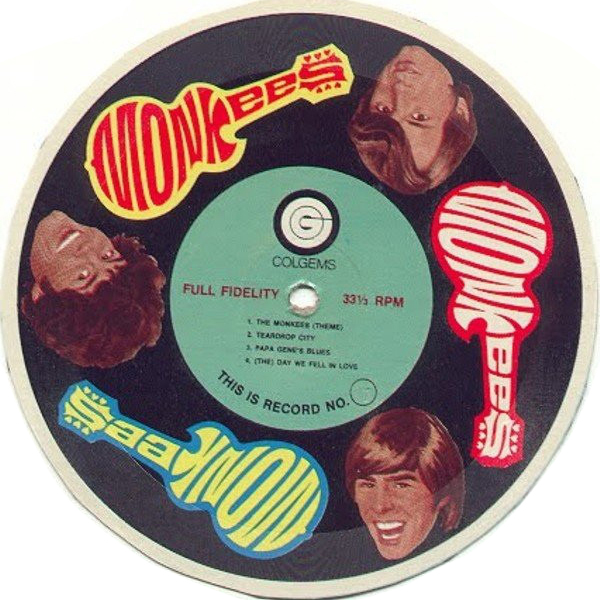 Post continued their rock n roll partnerships with The Monkees. By 1970, the original broadcast run of the hit television series had finished, but the show was still incredibly popular. Post sponsored the Saturday morning repeats of the serial and released some of the most beloved songs by the group on the back of Frosted Rice Krinkles, Alpha-Bits, and Honey-Comb. In total, there were three different records, each with four songs, some of which became household favorites including “The Monkees Theme,” “I’m Not Your Steppin’ Stone,” “Last Train To Clarksville,” and “I’m A Believer.”

Sherman and the Monkees, however, were just a build-up to what Post had up their proverbial breakfast bowl. In the early 1970s, they put out what may be the ultimate cereal box record releases: a series of flexi-discs featuring none other than The Jackson 5. Appearing on the back of Alpha-Bits, Super Sugar Crisp, and Frosted Rice Krinkles Cereals, the cut-outs included some of the Jackson 5’s biggest hits like “ABC,” “I’ll Be There,” and “Never Can Say Goodbye.” The band also appeared in advertisements for Alpha-Bits, showing them piling out of a long white convertible before spelling out words made from the cereal, the jingle an homage to the group’s huge hit “ABC.” A quick search on YouTube features a collector playing one of the 40-plus-year-old cardboard discs by the Motown stars, and it actually does not sound half bad — I am pleasantly surprised by how clear something cut out from the back of a box of cereal more than four decades ago is still audible.