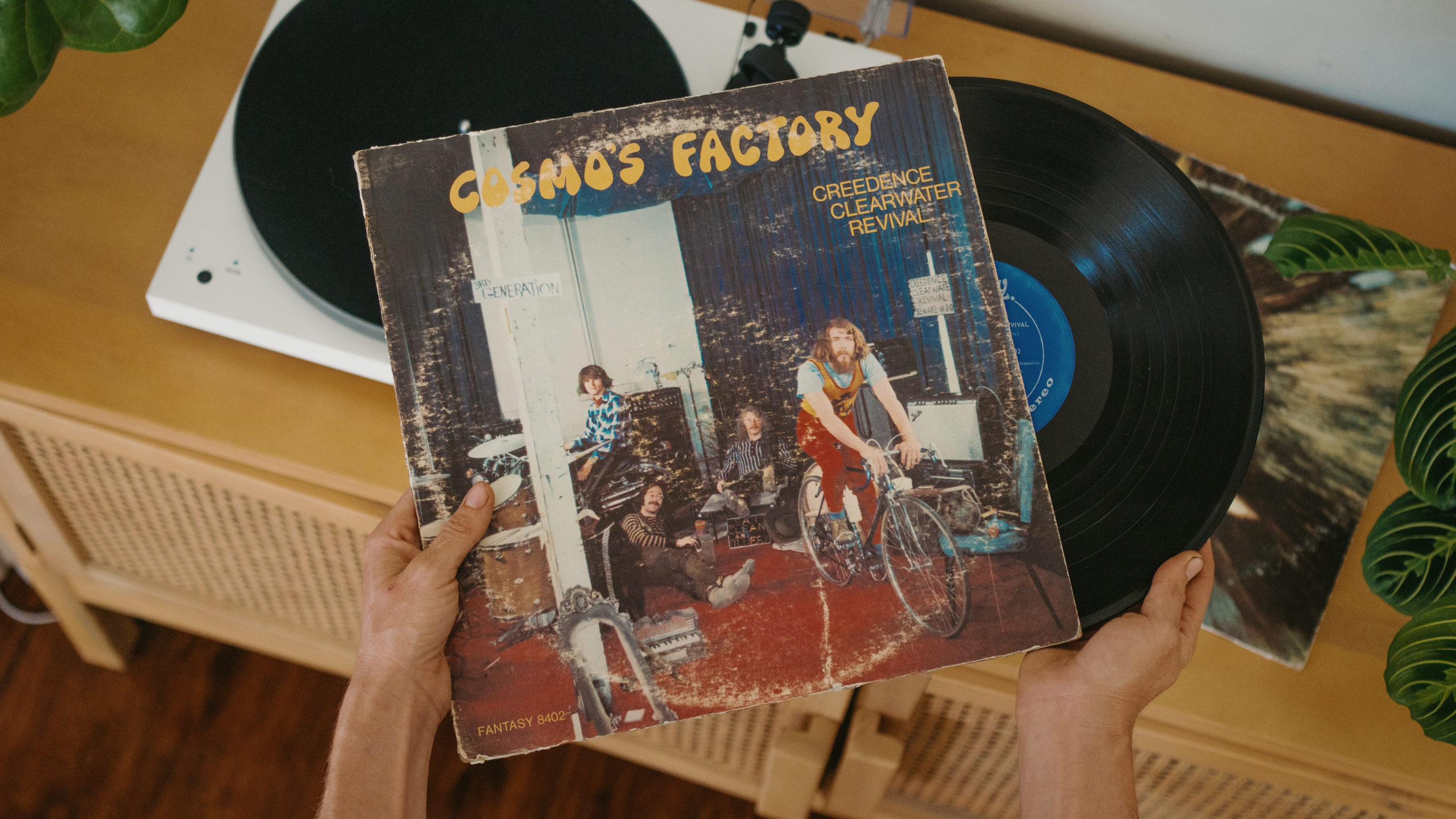 One Saturday when I was a kid, my mom dragged me to a department store. She probably promised me a new comic book.

As she shopped in the Exasperated Single Mothers section, I wandered away and started crawling through racks of clothes. I didn’t realize we were near the record department, which had an old-school jukebox, until some smart-ass kid cranked the volume to the point of chaos and played Creedence Clearwater Revival’s “Run Through The Jungle.”

There I was, hiding in clothes racks like a feral suburban child, as the sinister bass line seemed to vibrate the entire store. This was scary loud and the song sounded like a nightmare come to life, the jukebox breathing fire and distortion. I was too afraid to move.

And then it all went silent as the plug was pulled and I heard a manager muttering and customers laughing. I crawled out from that rack of capris pants a CCR fan for life. 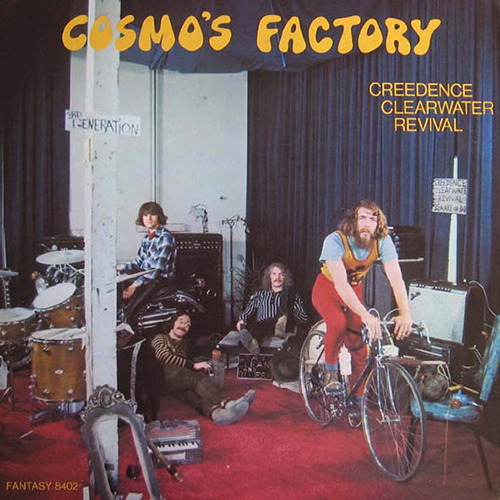 When Cosmo’s Factory was released 50 years ago, Creedence was arguably the biggest band in the world. As of 1969, CCR was reportedly outselling The Beatles in the United States, which means they were outselling everyone. While The Beatles were far more influential and culturally important, CCR was cranking out memorable music that was moving units.

In 1969 alone, the California band released three platinum albums — Bayou Country, Green River, and Willy and the Poor Boys — one of the greatest feats in rock history. Cosmo’s Factory, released in 1970, would do nothing to slow the momentum, generating six singles, four of which were massive hits.

How on fire was songwriter John Fogerty? After leading the band to three platinum records in a single year, he then turned around and wrote Cosmo’s Factory, the biggest and best album of the band’s history. Dude was incendiary.

Just ogle the tracklist for this birthday boy:

Four albums released in 20 months and we’re just now getting “Who’ll Stop the Rain” and “Lookin’ Out My Back Door”? Wild.

There was nothing revolutionary about Fogerty’s writing or the music made by Creedence. Its timeless qualities, more apparent now than in 1970 when all of CCR’s early rock n’ roll influences were still making music, are key to why it was so successful and has endured so long.

Experimental music is crucial — The Residents should never be too far from the turntable — but songwriters who can use the basic building blocks to construct something new that stands on its own are equally admirable. Fogerty’s songs are as straightforward as it gets, yet he has an uncanny knack for digging fresh emotion from a handful of chords.

It helps to have a band that applies a similar aesthetic to its playing. Bassist Stu Cook, drummer Doug Clifford, and rhythm guitarist Tom Fogerty are CCR’s collective driving wheel. They’re able to shift easily from swampy grooves to breathless boogie while never overplaying, which is showcased on the opening track of Cosmo’s Factory.

“Ramble Tamble” is a particularly stupid name for a song that vibes so hard. After a rock n’ roll start, it downshifts into three-and-a-half-minutes of a psychedelic instrumental jam before seamlessly rejoining the boogie. It’s 7:11 of holy roller ass-shaking — and it’s the first song on the album.

The rest of Side A is dotted with classics such as “Travelin’ Band,” an homage to Little Richard’s “Good Golly Miss Molly” that was a little too faithful; it led to a lawsuit that was settled out of court.

There’s “Lookin’ Out My Back Door,” The Dude’s favorite CCR song, and one that studies have proven raises serotonin levels (not really, we made that up, but it seems feasible). It’s pretty much an up-tempo country song, a genre that CCR pulls off effortlessly.

“Run Through the Jungle” closes the side and it’s still scary AF. Cook’s bassline sounds like Satan’s heartbeat and Fogerty seems genuinely worried when he sings, “And don’t look back.” 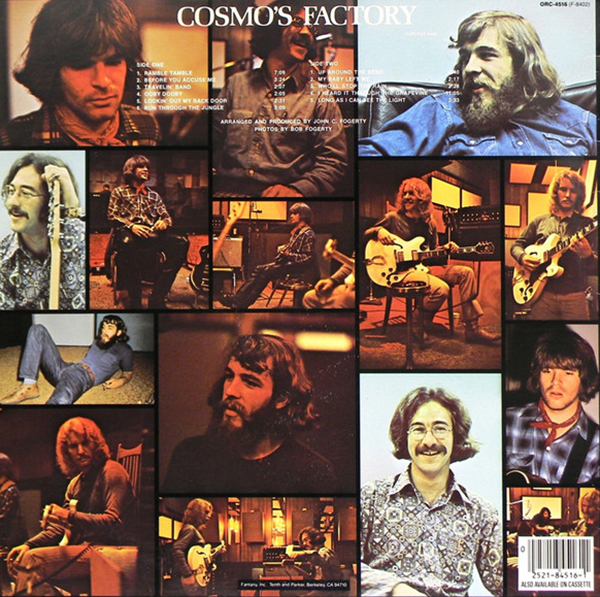 Side B is anchored by a slew of stand-outs. “Up Around the Bend” actually makes optimism seem like an option. “Who’ll Stop the Rain” sucks all of the optimism out of the room. “Long As I Can See the Light” is essentially a spiritual about the magnetic pull of home.

The remaining four songs are covers, most of which are routine. “Before You Accuse Me,” “Ooby Dooby,” and “My Baby Left Me” are standard bar-band covers of the day and Creedence does nothing special with any of them. They’re the definition of filler, recorded primarily to honor some of the band’s influences (Bo Diddley, Roy Orbison, and Elvis Presley, respectively).

The other cover is different — and epic.

CCR takes “I Heard It Through the Grapevine,” made famous by Marvin Gaye in 1968, and turns it into 11 minutes of pure psychological drama. Fogerty’s voice, not the prettiest thing you ever heard, reveals surprising range as he repeatedly rises into a falsetto while the band just keeps chugging. Fogerty’s guitar solos seem to go through the seven stages of grief, each one getting more unhinged and angry.

It’s a masterful interpretation that points out CCR’s chief strength. When operating at their peak, as they are on much of Cosmo’s Factory, they sound like no one else even while combining a multitude of familiar influences.

You never hear people say, “Hey, that band sounds like Creedence,” because there aren’t any bands that sound like Creedence. Which is weird when you think about it. Creedence built its sound on the foundations of roots and popular music, some of the most familiar and enduring music of all time.

It’s almost as if CCR can’t be influential because its own influences are so glaringly obvious. Instead, CCR is simply part of the fabric of American music, and Cosmo’s Factory might be their crowning achievement.