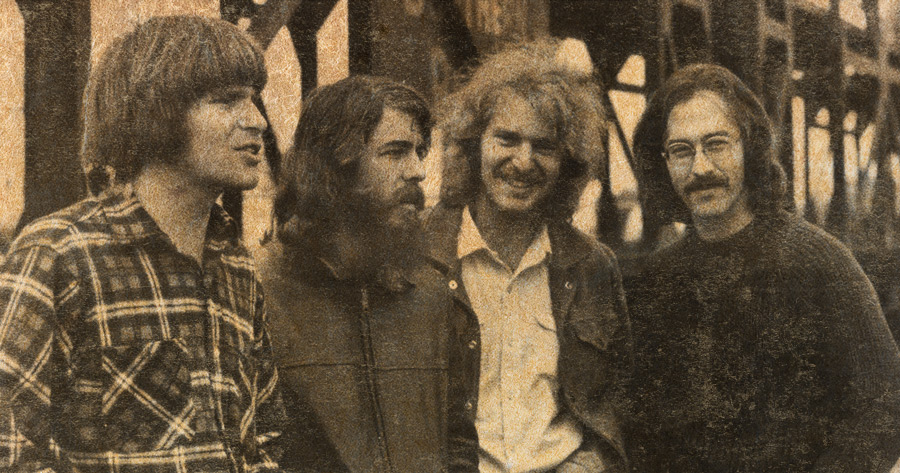 To celebrate the 50th anniversary of iconic swamp rockers Creedence Clearwater Revival, Craft Recordings has released a deluxe vinyl box set called The Studio Albums Collection (Half-Speed Masters). As the name implies, it collects all seven CCR studio albums, each of which was treated to fresh half-speed mastering at the famed Abbey Road Studios. Included in the box is an 80-page book featuring brand new liner notes tracing the band’s history. Below is an excerpt and some of the rare photos featured in the book.

John Fogerty, Doug Clifford, and Stu Cook met at Portola Junior High School in 1959, forming a mostly instrumental trio, the Blue Velvets, which played “jukebox standards” of the day by the Ventures, Duane Eddy, Bill Doggett, Link Wray, and Freddie King for local high school dances and sock hops — with Fogerty on guitar, Cook on piano, and Clifford on drums. John’s older brother Tom, who had his own bands, including one dubbed Spider Webb And The Insects, was already married with a couple of kids and holding down a steady job at Pacific Gas & Electric when he was convinced to join as the lead singer for Tommy Fogerty and the Blue Velvets.

With Tom as the main vocalist and songwriter, the group signed to Oakland’s Orchestra Records, releasing three singles between 1961 and 1962, with Oh My Love, the second, added to KEWB San Francisco’s Top 40 playlist by none other than the late countdown king Casey Kasem.

At this point, Tom began playing rhythm guitar as well, John began collaborating on the writing and even penned a song on his own (Have You Ever Been Lonely), while Stu Cook switched from piano to bass. In 1964, the band headed to the studio for Fantasy Records, recording two songs co-written by the Fogerty brothers, Don’t Tell Me No Lies and Little Girl (Does Your Mamma Know), which came out in November.

John had seen a three-part TV special on the local jazz label, which had a national hit with pianist Vince Guaraldi’s Cast Your Fate To The Wind, and was soon employed as a clerk in the company’s shipping department.

Fantasy co-owner Max Weiss christened the band the Visions, then changed it to the Golliwogs, which was an attempt to market them as a British Invasion group like The Beatles or The Animals. The name was based on a children’s literary character, a blackface minstrel rag doll, which would eventually be dropped for its racist implications, but not before the band released several singles.

Just one of those singles, a Gloria-esque garage-band rocker, Brown- Eyed Girl (not the Van Morrison song, but credited to Tom and John Fogerty), garnered some airplay in Miami in 1968, landing at #10 on Billboard’s Regional Breakout chart. 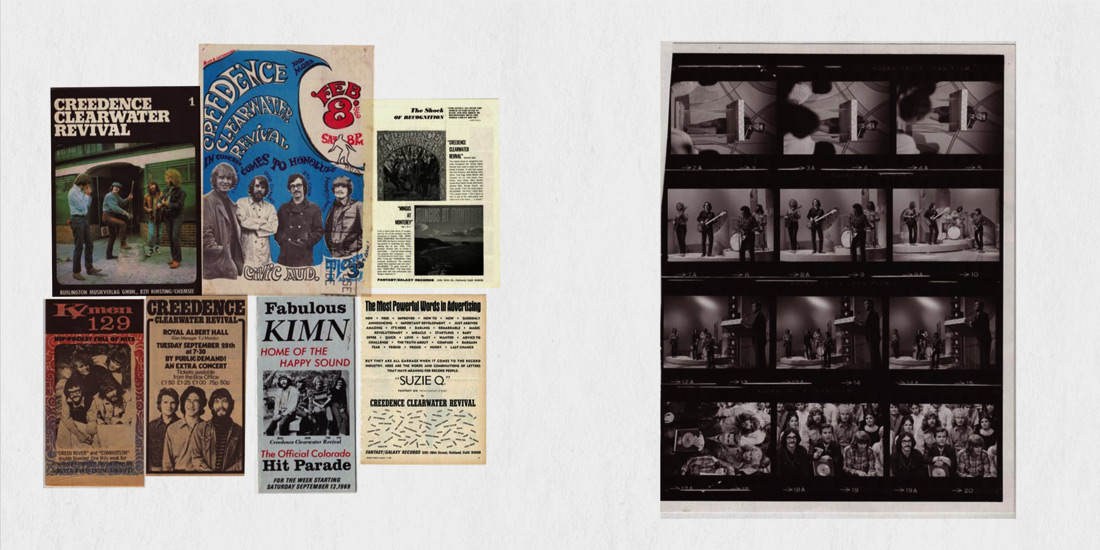 The Golliwogs were a fixture on the Bay Area scene, playing frat parties and pizza joints like the Monkey Inn in Berkeley, where they had a residency, with John now ensconced as the band’s lead vocalist, lead guitarist and primary songwriter, although he shared songwriting credit with Tom (the singles were credited to Wild-Green, their respective aliases Rann Wild and Toby Green).

“There was nothing remarkable about them at that time,” recalls longtime San Francisco Chronicle music journalist Joel Selvin. “There were dozens of bands such as Peter Wheat And The Breadmen, just like them.”

In 1966, John Fogerty and Doug Clifford were drafted, joining the Army Reserve and Coast Guard Reserve, respectively. Both were discharged in 1968, just after the Golliwogs’ final single was released, a John Fogerty composition dubbed Porterville, an early example of working-class fury based in part on his father’s experiences, written in between maneuvers baking in the hot sun during stints at Fort Bragg, Fort Knox, and Fort Lee. 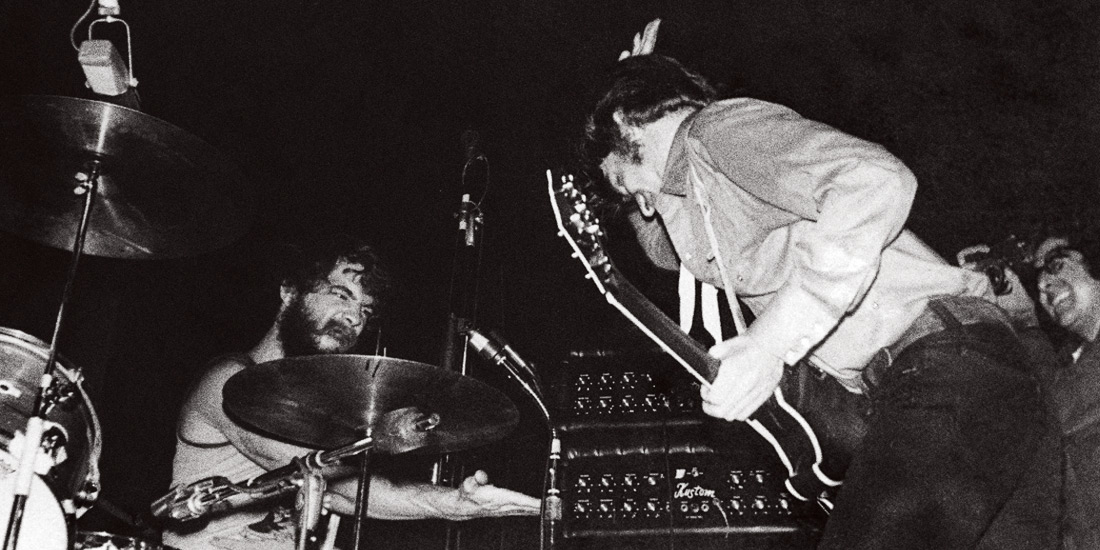 The song, which imagined his dad falling prey to the law from the common man’s point of view, evinced the swampy, Southern sound the band was cultivating — a combination Selvin describes as “Pops Staples’ guitar tunings and that Sun Studios echo … The band thought of themselves as Booker T. And The MG’s, with a Memphis sound.”

The quartet regrouped and recommitted to making it, playing live and hitting the recording studio under the auspices of new Fantasy Records owner Saul Zaentz, who agreed to the group’s desire to change their name. At the start of 1968 – after reportedly rejecting Hardwood (Stu’s choice), Gossamer Wump (Doug), Whiskey Rebellion (John), and Creedence Nuball and the Ruby (Tom) – they settled on Creedence Clearwater Revival. Their desire according to Cook, quoted in Hank Bordowitz’s 2007 Unauthorized History of Creedence Clearwater Revival, was for “something weird along the lines of Buffalo Springfield or Jefferson Airplane.”

Over the years, the band explained their choice of name: Credence Nuball was a South African custodian who lived in the apartment building of a friend of Tom’s, while the phrase “clear water” came from John mishearing the motto “clean water” from a PSA that followed a TV spot for Olympia Beer. Finally, “revival” expressed the foursome’s renewed commitment to their post-Golliwogs musical enterprise. “It told you this was an American rock and roll band, and it was unique,” wrote John in his 2015 autobiography, Fortunate Son. 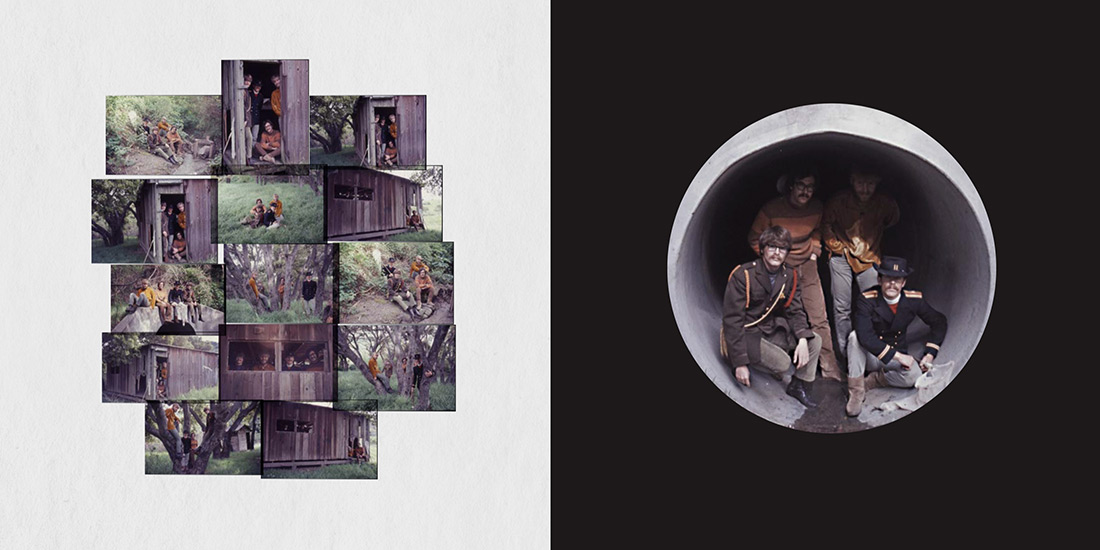 The Golliwogs’ final single, Porterville/Call It Pretending (credited to yet another pseudonym in T. Spicebush Swallowtail, a species of butterfly which was supposed to be the name credited to group compositions) was reissued under the band’s new moniker on the Fantasy subsidiary Scorpio. But it wasn’t until Susie Q. – which peaked at #11 on the Billboard Hot 100, receiving airplay not just on local Bay Area station KMPX, but Chicago’s WLS – that the band began to build real forward momentum.

Fogerty’s guitar playing on the song is a tribute to one of his idols, James Burton’s unique hybrid style, in which he used both a flat and metal finger pick. The final result was precisely what Creedence set out to do: “I’m gonna take a journey with this song,” said John.

Not a psychedelic trip, but a carefully planned, meticulously mapped-out expedition. The instrumental backing was recorded in a single take, with John returning to cut the vocal.