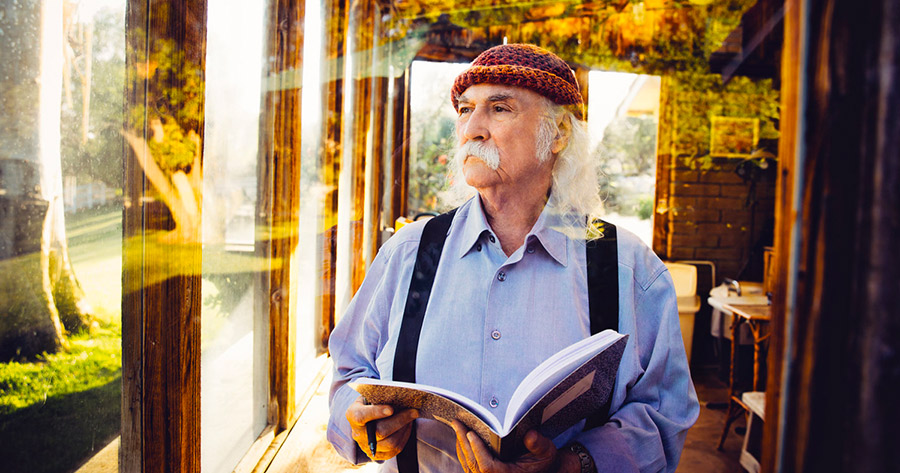 Last month, David Crosby released Here If You Listen, a collaborative new solo album with Becca Stevens, Michelle Phillips and Michael League. It will mark his fourth album in five years — an outrageous pace of activity, especially from a prestige artist who hadn’t previously put out much under his own name.

The former Byrd and member of Crosby, Stills and Nash (and Young) first released a record under his own name, If I Could Only Remember My Name, at the height of CSNY’s success in 1971. Backing him up on that rowdy, lopsided LP was a mishmash of familiar faces from the folk-rock era: Joni Mitchell, Grace Slick, most of the Grateful Dead.

But after Name, which fell into obscurity for decades, Crosby became more headline than headliner. Throughout the ’80s and ’90s, the news cycle could (mostly) only remember his name in the context of drug-busts, DUIs and other bad behavior.

But something changed around 2015, just about the time infighting and creative differences ended Crosby, Stills and Nash as an ongoing concern. He resurrected his solo career, releasing a not-bad album called Croz in 2015. But, true to form for a singer who always sounded best in harmony, it would take new associates to fully bring his fire back.

What happened next amounts to one of the most stunning comebacks for an artist who could have faded away long ago. Crosby hooked up with Snarky Puppy, a multifarious, polyphonous band that spoke to his earliest influences from the jazz era. He found sympathetic singers in Becca Stevens and Michelle Willis, who he integrated into his Lighthouse Band. And he found a crucial creative partner by blood: James Raymond, his long-lost son with whom he reconnected in 1995, was now a major presence in a producer role.

Over the next three years, Crosby released his finest solo work, one after another. The following year brought Lighthouse, a tender, luminous acoustic work about family and the trials of marriage. Then 2017’s eclectic, upbeat Sky Trails put a pep in his step: the singer had always had an avowed love of Steely Dan, and League, Snarky Puppy’s leader and frontman, was the perfect catalyst for a harder, funkier sound.

And by the sound of the lead single Glory, from Here If You Listen, the 77-year-old still sounds ready to explore new avenues. While Crosby’s story and body of work has a “better late than never” tint to it, here’s a look at how his unique style developed over the past five decades.

Crosby first made his name in the Byrds, the ’60s heroes who married folk harmony with a driving edge. This was in no small part due to their leader, Roger McGuinn, choosing the 12-string Rickenbacker as their main weapon: a futuristic-looking guitar with an irresistible, sonorous clang.

Crosby started writing early for the band, with moody gems like 1966’s What’s Happening?!?! and 1967’s Everybody’s Been Burned. But it would take until the band’s Sgt. Pepper-esque masterpiece, The Notorious Byrd Brothers, for his true approach to bloom. Crosby had been raised on West Coast jazz at a precocious age, leading to a shape-shifting, aqueous approach to guitar rhythms and chord choices.

Lyrically, his head is equally in the clouds: Tribal Gathering is a hazy hippie dream, and the controversial bonus track Triad is a shadowy, transgressive look at free love. The latter song, as well as Crosby’s refusal to participate in a Carole King cover, was the final straw for his membership in the Byrds. And as for The Notorious Byrd Brothers, rumor even (falsely) circulated that he was replaced by a horse on the album sleeve. Right from their debut, self-titled album in 1969, Crosby, Stills and Nash were a titanic commercial force. And happily for Croz, it was the first project in which he had been contextualized as an equal singing and songwriting participant.

On that debut, Crosby wrote decent tunes, like Guinnevere and Wooden Ships; on their sophomore album, Déjà Vu, he threatens to steal the show. The incendiary Almost Cut My Hair — while 100% married to its time, place, and context — remains one of his all-time best vocal performances, and his title track ropes the whole band into a technically brilliant, mind-bending groove.

Déjà Vu is still seen as an all-time classic in the genre, but that would essentially be their one-and-done; they not only wouldn’t record another album together for seven years, they wouldn’t deliver any music of that calibre again. But Crosby had truly become himself.

If I Could Only Remember My Name

Around the mid-’70s, the story of Crosby, Stills, Nash and Young would look increasingly murky, with shifting egos and band configurations challenging the group’s holistic vision. But first: a victory lap.

But while all those albums were mannered, well-produced, and clearly thought out, Crosby’s album reflects his party-animal state of mind. If I Could Only Remember My Name, the album he issued under his own name in 1971, resembles none of those albums: it sounds like a bunch of ’60s heroes rowdily picking up some instruments during an epic bender.

The album’s liner notes seem to include everyone Crosby had ever bumped into at a function or in a studio hallway: Stills, Nash, Young, Slick, Mitchell, Jerry Garcia, Phil Lesh, Mickey Hart and Bill Kreutzmann all feature somewhere on shaggy jams like Music Is Love and Song With No Words (Tree With No Leaves).

If I Could Only Remember My Name’s title implies a state of near-total dissociation, and could possibly be defined literally: These droning, strange, half-lucid jams sound like a half-remembered party you’re still buzzing from. Oh Yes I Can

Released 18 years after his first solo album and out of print in the US since 1989, Oh Yes I Can is barely even an album at all. It’s a threadbare bin of various aborted studio projects of the ’70s and ’80s. Some tracks, like Drive My Car, were tried and aborted by CSN, and Drop Down Mama, a cover of the early bluesman Sleepy John Estes, is a callback to his goofy side project with the Grateful Dead, David & The Dorks.

This mostly-forgotten album, lousy with dated synths and wind chimes, had some personal utility for Crosby in the late ’80s; it was a return to music after his recent prison sentence for drugs and weapon possession. But by any measure of the album or its context, Oh Yes I Can is best left in the past. An adrift Crosby’s second attempt at a comeback album was slightly more palatable than the first — but still an unbecoming yacht-rock fiasco. This time around, Crosby wasn’t in the songwriter’s chair; he mostly opted to interpret songs by Jimmy Webb, Marc Cohn, John Hiatt, and more.

If this was pulled off with more confidence, vision or chutzpah, Thousand Roads could’ve had the gravity of great interpretive albums like Rickie Lee Jones’ Pop Pop or Willie Nelson’s Stardust, in which great 20th century writers pay tribute to their peers and influences. Instead, Roads sounds more like an act of desperation to resuscitate his commercial goodwill. Not even his new cohort Phil Collins could successfully update him for the 1990s.

Thousand Roads would mark yet another long hiatus for Crosby; he wouldn’t record another solo album for almost 20 years.

While the forgettable Thousand Roads flopped in 1993, the ’90s weren’t necessarily fruitless for Crosby. Crosby, Stills and Nash continued their reign on the touring circuit, even recording one more very good album with Young, 1999’s Looking Forward.

Even more consequently, Crosby reunited with his long-lost son, James Raymond, who he’d given up for adoption in the ’60s. He helped to restore his father’s mojo, first with the jazzy collaboration CPR (Crosby, Jeff Pevar, and Raymond) and, later, with 2014’s Croz. It’s a decent listen, with Crosby seeming fully engaged for the first time in decades on mellow gems like What’s Broken and Slice of Time.

But he was still insecure about returning to music. In a revealing interview with Rolling Stone’s Stephen Rodrick, he said he’d be a “broken spirit” if the album flopped. “It’s the best I can do,” Crosby admitted. That wasn’t really the case though. While Croz is a worthy comeback, new heights were just around the corner. If Crosby’s public image was far more centered around criminality and controversy than his musical abilities throughout the ’80s and ’90s, his greatest solo album to date would seem to lock the door on his past. The beautiful Lighthouse, a collection of twilit acoustic tunes, is squarely about his family, his current life, and how he’s grateful to still have both. It’s also his first collaboration with Snarky Puppy’s Michael League, who uniquely coaxes out Crosby’s ethereal essence; the production is as misty and oceanic as its cover sleeve.

Sonics aside, the songs are terrific. The first cut, Things We Do For Love almost reads like Crosby writing his own version of Neil Young’s tender 2000 album Silver and Gold, expressing thanks for domestic bliss without getting too dewy or overly sentimental. And every one after it — the grooving Look In Their Eyes, the philosophical Paint You A Picture — simply looks good on this long-adrift music legend. From its heartfelt tone to its enveloping atmosphere, Lighthouse is a knockout punch. With Lighthouse as his hushed, profound latter-day statement, Crosby was ready to let his hair down on its follow-up. He found a new home working with the endlessly funky, genre-agnostic Snarky Puppy, and was ready to bring their talents to full-bore.

The Stevie Wonder, horn-accented lead single, She’s Got To Be Somewhere, brings the roof down. His jazzy co-writes with Raymond, including Sell Me a Diamond and Curved Air, are almost as good. He even touches back on the Lighthouse sound; the shivering, spooky title track, sung in tandem with Becca Stevens, is an absolute delicacy.

With Sky Trails, he brought his one-of-a-kind collaborators to the forefront; its follow-up, Here If You Listen, continues the goodwill. In 2018, Crosby keeps it in the family.