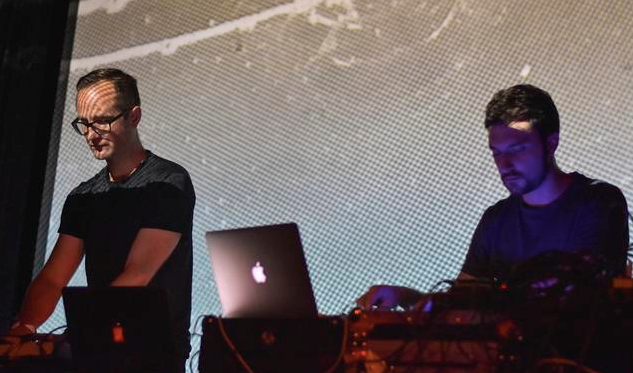 Four days removed from the Decibel Festival, I’d have to say the event was a rousing success. Making it to every single performance wasn’t a possibility for just one person, but the shows I was able to attend proved to be a packed and sold out event. With the possible exception of the Nicolas Jaar DJ set (stop talking at concerts, people!), the audiences were rapt with attention and respectful of the artists, who all gave inspired and original performances. Granted, for those who have never been, Seattle has its own unique energy which is a hard to place to describe, but just makes sense once you’re out and about, traversing the night life and sponging the atmosphere. The energy is somewhere between Portland (zombified) and New York City (relentlessly fast-paced). Stands to reason when considering Seattle’s geographical mass, but the tone of the town complimented what the Decibel acts delivered: fast paced techno madness followed by introspective ambient noise. It was a good range of music, people, and attitude.

I would typically wander in to each venue with my Discogs hoodie on, and I received many smiles and the thumbs-up sign because of it. Every artist I interviewed had a slightly different appreciation for the Discogs experience, but in the end it was clear that they appreciated it was the finest resource for music and vinyl one could possibly find on earth. The weekend nights were absolutely booming with people, but to be fair, there were a lot of club goers who seemed to be oblivious to Decibel and were just out to party. On the Friday and Saturday nights of the festival, the douchebag factor was in full effect, and when I went to see Recondite at Neumos, I thought I might be kidnapped by frat boys and later drowned in a kiddie pool full of beer at a local sorority house. The backwards-hat wearing goofballs didn’t last too long, though, and the die-hards overpowered them.

If I had to rate my favorite performances of the festival, I would have to put Laurel Halo at the top, followed closely by Roman Flügel. While Flügel only performed a DJ set, his smiling eye-contact and interaction with the crowd was such a welcome relief to five days of performers just staring at their laptops that I could have just hugged the guy for acting human. Halo’s set was about as perfect as you can get in terms of build-up and response from the audience. She kept it varied, and quite frankly, it was cool to see her out-funk all of the male performers by miles. She tapped into the specific energy of that crowd, and was masterful in her production.

Autechre followed Halo that same night, and while Autechre is my favorite group in general out of all the performers, their live set was pretty typical of what they’ve been doing for years. I will say it was little more “dance-y” than pervious shows, but still was indicative of their recent sound in general. It doesn’t exactly help that they perform in total darkness: c’mon, guys, give us SOMEthing to look at here. It was clear that the big night of the festival was this night, and I could spot other artists in the crowd that I had already met and interviewed waiting patiently to check out the Autechre set.

In the end, it felt like a tight-knit community showing their support for a genre they love. There weren’t a lot of gushing platitudes, just earnest enjoyment of an artist’s process. If the turnout of Decibel Festival 2015 was any indication of future events, I would guess there will be many more to come.