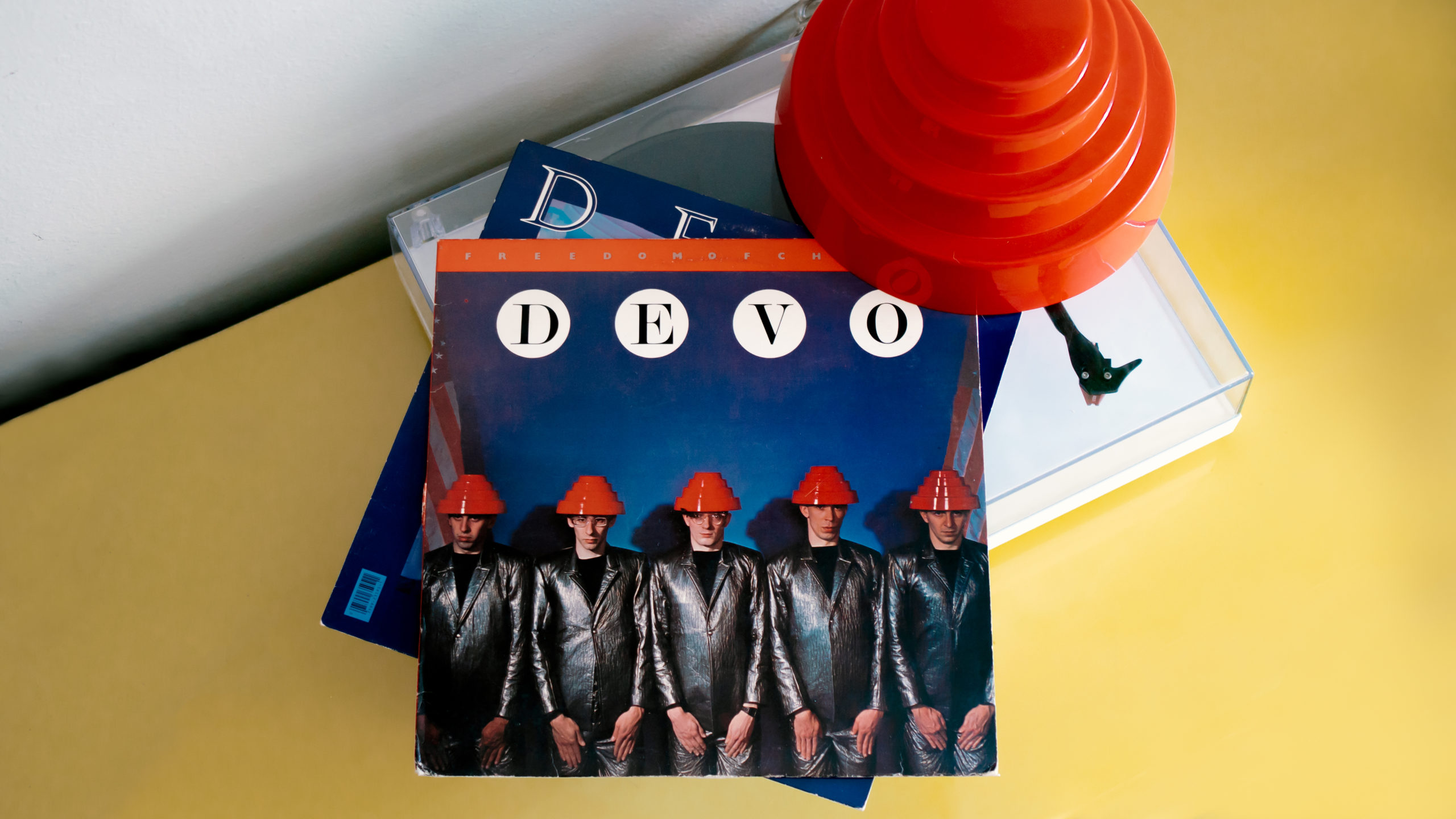 At the start of 1980, the fate of synth-pop superheroes Devo was uncertain. Demo tapes had already garnered the Akron, Ohio natives a glittery fan base including David Bowie and Iggy Pop, and saw their 1978 Warner Brothers debut Q: Are We Not Men? A: We Are Devo! produced by none other than maverick Brian Eno, securing the band cool credentials and an artsy following. Their follow up LP, Duty Now for the Future, failed to generate a hit single, overwhelming positive praise or a significant sales story. If they did not turn things around for their third album, Freedom of Choice, it would be their final one with the label. Devo Lean Into Their R&B Influences

Their past two LPs had been amalgamations of tracks written in and around their hometown from the early days as a band. Choice was crafted completely from scratch in their new base of Los Angeles. While renowned for their New Wave sensibilities and esoteric lyrics, it was the Detroit sound and Motown vibe that were the biggest influence on the band for the new record. ‘We were already discussing among ourselves this idea of letting an R&B influence into our music,’ recalled bass player Gerald Casale to American Songwriter. ‘We were constantly reinventing ourselves and changing our look and our sound each record. That was part of what made us excited. We didn’t want to keep statically doing what we did.’ The Moog was a huge inspiration at the time, and the group wanted to bring elements of the instrument into the new endeavour. They picked Bob Margouleff to come in and produce, as he had been crucial in several Moog-heavy Stevie Wonder classics.

Lead singer Mark Mothersbaugh later said in The Stranger that Freedom of Choice, ‘was the last album where there was really a lot of a concerted effort where everybody got together every day, and talked about stuff, and wrote things together.’ Recordings took place live in the studio, with all players contributing at the same time instead of in isolation. Most songs were done in one take. Synths and additional vocals were added later. And while the foundation of tracks may have come from a more soulful place than the previous LPs, the quintessential Devo trademark of political, sarcastic lyrics was still front and center. ‘You make it taste good so that they don’t realize there’s medicine in it,’ Casale laughs. ‘Devo was getting dance-y with a message.’


This message was indeed swathed in delicious pop titbits which smacked you instantly upside the head upon first listen. The icy production, precision drumming, and in your face front technological spin of synthesizer mixed perfectly with the equally often staccato delivery by Mothersbaugh. Lead single ‘Girl U Want’ takes the expected nerd-sees-girl, nerd-can’t-talk-to-girl theme and turns it on its head with a punky, succinct, crisp robotic interpretation. Title single ‘Freedom of Choice’ perfectly encapsulates these components.

A swing to the right politically seemed evident to lyric writer Casale, with the impending presidency of former Hollywood actor Ronald Regan looking in the then-future. In classic Devo fashion, the verses paint a grim warning of an almost dystopic, constricting wasteland, as Mothersbaugh urges the listener to remember: ‘In the land of the free / Use your freedom of choice.’ The genesis of personal favourite ‘Gates of Steel’ was a pretty and melodic piece of music recorded by Mothersbaugh at a home studio while he was with then girlfriend Debbie Smith of the girl group Chi-Pig. ‘I had written those lyrics just as lyrics, independent of any song,’ remembered Casale on rhino.com. ‘We would share notebooks and sketchbooks and lyric books and have them in the studio for anybody to look at, so when Mark liked those lyrics, I said, “Well, let’s try them on that music!” And it was just perfect.’ The speeded up, almost sterile purity of ‘Steel’ reflects the message of breaking free of convention and expectation, urging the audience to take the proverbial road less traveled: ‘Unlock the secret voice / Give in to ancient noise / Take a chance a brand new dance /Twist away the gates of steel .’

Of course, the song that brought the album- and the band- to the masses is the indomitable ‘Whip It.’ Upon release, Choice suffered from lacklustre support from their label, with minimal promotion and marketing put behind it. The band was disappointed, but took the development in stride, embarking on their pre-planned tour anyway. Unbeknownst to them, Kal Rudman– an independent record promoter located in Florida- decided that he loved the song and was going to take it on as a pet project. At the time, the job of such promoters was to tip radio stations as to what was going to be the ‘next big thing,’ and try to get them to play specific records. Rudman included the song on his list of must-hears that he circulated around the southeast region of the US. DJs began playing the cut, with gay discos having it in heavy rotation. Finally, the organic momentum got to New York, which transformed the trajectory of the entire venture and the band’s fate. ‘The venues that we’d been booked in previously were way too small,’ said Casale. ‘Instead of playing to 400 people, we were playing to four or five thousand people.’

The visual component of Devo also came into the spotlight with Freedom of Choice. Aesthetics had always been a crucial component of their band. Larger live audiences meant more people to see the costumes, stage setups, and lights that collaborated the overall ethos of the group. But another, even larger platform of the emerging MTV channel allowed young music fans a preliminary introduction to the band via the constant rotation of their videos, especially the omnipresent ‘Whip It.’ The clip highlights Devo’s unique use of wardrobe, as the group is shown donning their trademark red conical hard hats. Everyone in the band is shown in black sleeveless bodysuits, with all members of the band- except Mothersbaugh- having most of their faces covered by the cloth, giving them a uniform, anonymous appearance. Mothersbaugh dons a whip as he stomps around a Technicolor noir set that looks like it was lifted from either Seven Brides for Seven Brothers or the Wizard of Oz back lot, then adorned with bales of hay, an all-American mother ‘whipping’ cream (or some other questionable white substance) a posse of cowgirls and boys and their cross-eyed, gun-toting sidekick. Mothersbaugh uses his prop to disrobe a Gone with the Wind clothed woman as the song progresses; at times, she looks human, at others a mannequin. It is not clear if this is just 80s ‘special effects’ in action or a critique of the male gaze. Either way, nothing seems astray or inorganic; in contrast to the highly computerized musicality, there is a thoughtful authenticity to the entire song- the entire album- as a fully conceptualized, evolving idea.

Freedom of Choice sits within that very small section of timeless LPs. The themes, lyrics, influences, and stylings clearly link it to a specific place and time, yet still sound as inventive and pertinent now as it did 40 years ago. If you have not listened to this record as a whole- or even these singles on their own- in a while, it is highly recommended, as they evoke a special mix of desolation with the desire to still have hope, a message that seems more important and appropriate today than ever before.