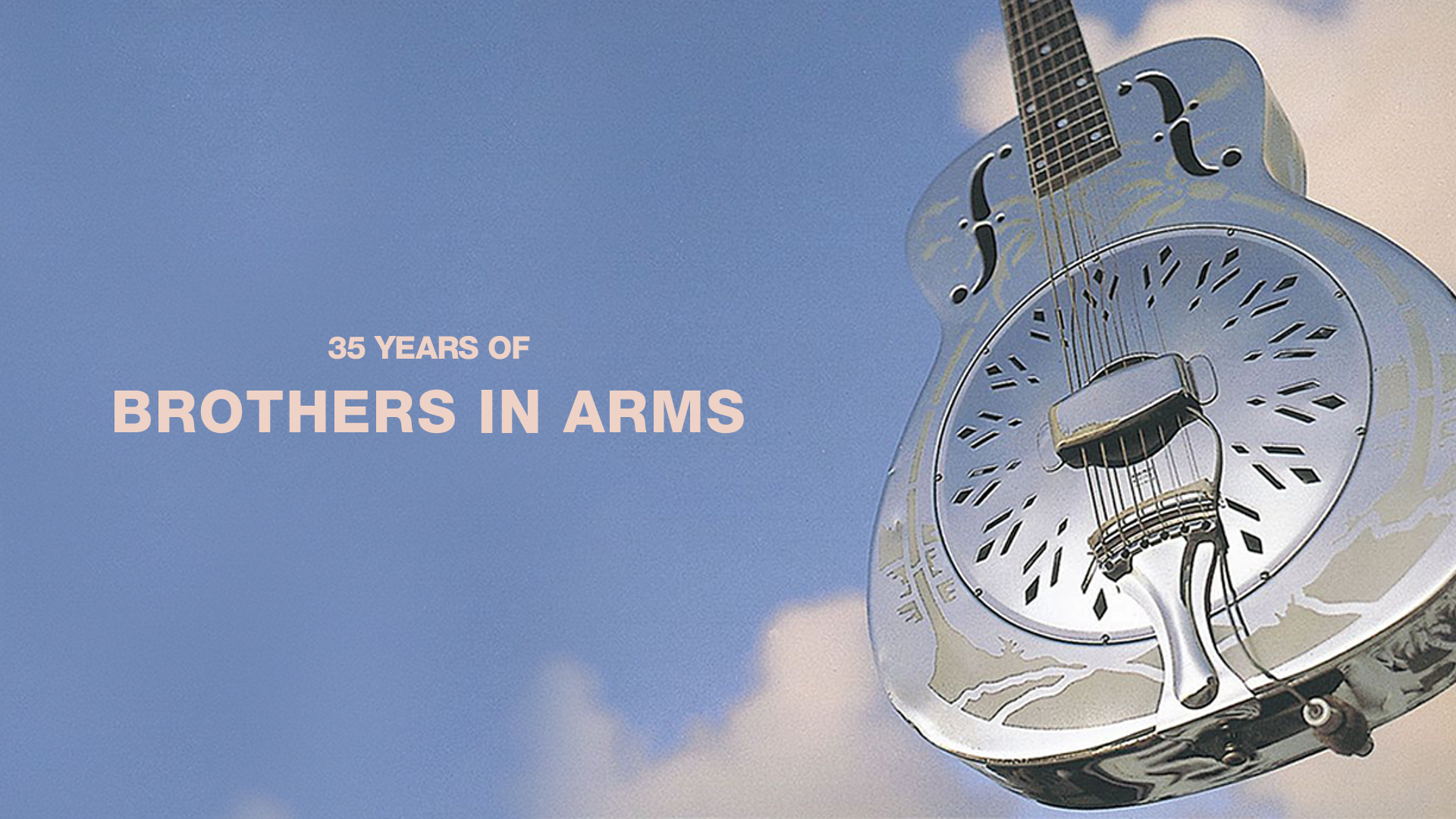 Dire Straits was an incredibly successful band by any standard in the spring of 1985, but still fell somewhere short of being a household name.

Mark Knopfler and company had released four studio albums, all of which had done well and generated an impressive amount of acclaim. But record labels were at the top of the food chain in the 1980s and true success to a major label was measured by units sold, not the music’s quality, and Dire Straits’ biggest commercial hit remained its 1978 debut, Dire Straits. Knopfler changed all of that the minute he wrote “Money For Nothing,” the first single from the band’s fifth album, Brothers in Arms. Carried by a massive guitar riff and a then-groundbreaking music video, the song carried Brothers in Arms to the top of the charts worldwide — and not just for weeks, but months. It also stirred up some controversy that still makes it a bad choice for karaoke.

It was easy to get swept up into the sudden mania for Dire Straits but 35 years later it’s harder to parse out the album’s appeal. It’s a bit of an oddity in the band’s catalogue, and in some ways an almost radical departure from what had come before.

On its first two albums, Dire Straits and the forever-underrated Communiqué, the band kept things locked down and rooted in tradition — rock, country, folk — with the gloriously fluid finger-picking of Knopfler and his gruff, suggestive voice being the most distinctive elements. Knopfler’s songwriting felt both grounded in the past and modern.

With the third album, 1980’s Making Movies, Knopfler grew more ambitious. His songs got bigger, his storytelling more cinematic, more overtly epic. That trend continued on 1982’s Love Over Gold, a 41-minute album with only five songs, including a 14-minute opening track, “Telegraph Road,” that felt like a soundtrack in search of a movie. And then came Brothers in Arms, which is filled more with mid-tempo ballads and creamy saxophone solos than roots rock, or any kind of rock, much less the kind of lengthy, almost improvisational highlights of Love Over Gold.

Knopfler nevertheless struck a vein of platinum with the album, which has sold more than 30 million copies and is currently 26th on the list of history’s best-selling records. It’s tied with Bruce Springsteen’s “Born in the U.S.A.,” a fitting spot given the tenuous but interesting parallels between Knopfler and Bruce Springsteen that culminated with Brothers in Arms.

When writing Making Movies, Knopfler asked Jimmy Iovine to be his producer after becoming a fan of his work on Springsteen’s Born to Run and Darkness on the Edge of Town albums. Iovine agreed and helped convince Springsteen’s esteemed pianist, Roy Bittan, to essentially become a band member for Making Movies. In many ways, Making Movies echoes Born to Run: Both are third albums that are far more ambitious than what had come before, and they both chase that elusive idea of rock and roll as romance, savior and salvation.

When Springsteen released Born in the U.S.A. in 1984 he was trying to finally reach a massive audience. He wrote in his autobiography that he intentionally made the songs “direct and fun” and had Bob Clearmountain mix the record so it would explode from speakers. “I was ready for my close-up,” Springsteen wrote.

Knopfler did much the same thing a year later with Brothers in Arms, even going so far as to change his signature guitar sound. He switched from a Fender Stratocaster to a Gibson Les Paul and asked ZZ Top’s Billy Gibbons how he got the sound used on the early 1980s albums that had turned ZZ Top into MTV superstars. “He didn’t do a half-bad job,” Gibbons said, “considering that I didn’t tell him a thing!”

Brothers in Arms is Knopfler’s version of direct and fun, and it briefly made Dire Straits the biggest band in the world.

“Money For Nothing” is clearly built for radio, right down to Sting’s infamous “I want my MTV” cameo (today, the song would be listed as Dire Straits, fea. Sting). And while the video now looks like a hidden stage of Minecraft, it was state of the art in 1985, including the pastel jackets and headbands worn by Knopfler.

There is that little problem with the lyrics, however. The song is written from the perspective of a blue-collar worker envious of MTV rock stars who are making millions and getting laid the easy way. In the second verse, Knopfler lets fly with three “faggots” in rapid succession, all of which are consistent with the character he’s depicting and all of which are just as cringe-inducing as hearing someone actually use the words pejoratively.

If the song were anything more than just a goof, if it had a serious point to make, then sure? But it’s just Knopfler making fun of a mouth-breather who thinks that musicians don’t work hard enough for their money, so it’s not only tone-deaf but self-serving. It immediately caused a minor controversy, which is saying a lot considering people were so clueless in 1985 that they wore parachute pants.

“Walk of Life,” the album’s other major single, is lightweight and catchy as hell. It’s about a happy busker, so you know it’s fiction, and was actually a bigger hit than “Money For Nothing.” As summer singles go this one is just about perfect, with keyboardist Alan Clark contributing a calliope-like hook.

The majority of the remaining songs are smooth, middle-of-the-road rock, not quite soccer mom music but in the neighborhood.

The best of these is the opening track, “So Far Away,” a slow-motion pop song built from tiny, perfectly interlocking parts wrapped around one of Knopfler’s most delightfully laconic vocals. It, too, was a Top 20 single.

Things get a shade too smooth with “Your Latest Trick” and “Why Worry.” The first sounds like the bastard child of Joe Jackson and Billy Joel, with both Randy and Michael Brecker laying on the honey with trumpet and saxophone. “Why Worry” is lovely, with an especially nice descending keyboard part from Clark, but Knopfler stretches it out to 8:31, which is a couple of minutes too many.

The album’s second side begins with a slow grind of three unremarkable songs that are more carefully crafted than emotionally engaging — “Ride Across the River,” “The Man’s Too Strong,” and “One World.” They’re well written and expertly produced but also just sort of disappear the second they finish playing.

Brothers in Arms Ends Triumphantly With The Title Track

A gorgeous indictment of the cost of war, “Brothers in Arms” was written during the 1982 Falklands War between the United Kingdom and Argentina and has since become a totem for veterans of the conflict. Unlike too many other songs on the album, this one is anchored by a real sense of gravitas and heartache, two things Knopfler had displayed in abundance on previous albums, and it still resonates.

Brothers in Arms isn’t Dire Straits’ best album but it arrived at the perfect time with the ideal song. In 1985, MTV was at the height of its power, and “Money For Nothing” was a natural for heavy rotation — hell, the heaviest of rotations. Two years later the song was still so popular that it was the first video played when MTV Europe debuted.

As it turns 35, Brothers in Arms sounds more dated than either “Dire Straits” or “Making Movies” but still has its charms. Just don’t look too closely under the glossy surface.