Goodbye and good riddance to 2020! Here we are now with whatever vague hopefulness we might have felt at the beginning of the year now just a distant memory. I’ll save all the pablum about the pandemic and general mayhem that took place in 2020 and cut right to the chase: Discogs contributors found the silver lining, at least when it came to the Database.

The Database broke multiple records, including a new high for the most submissions in one week and two release total milestones: 12 million releases reached in January and 13 million in September. In fact, the Database has seen one of its best years in a long time. A few good things have come out of this wretched year, so let’s take a moment to celebrate!

Funnily enough, compared to our now record-breaking streak of a year, 2020 had a sleepy start. In the first 11 weeks, spanning January to early March, submissions were consistently lower than the same period in 2019. It wasn’t until week 12 (March 16 to March 22) that we saw a significant bump in submissions. This comes as no surprise since this was around the same time that many countries were either already under a lockdown or announcing stay-at-home orders. 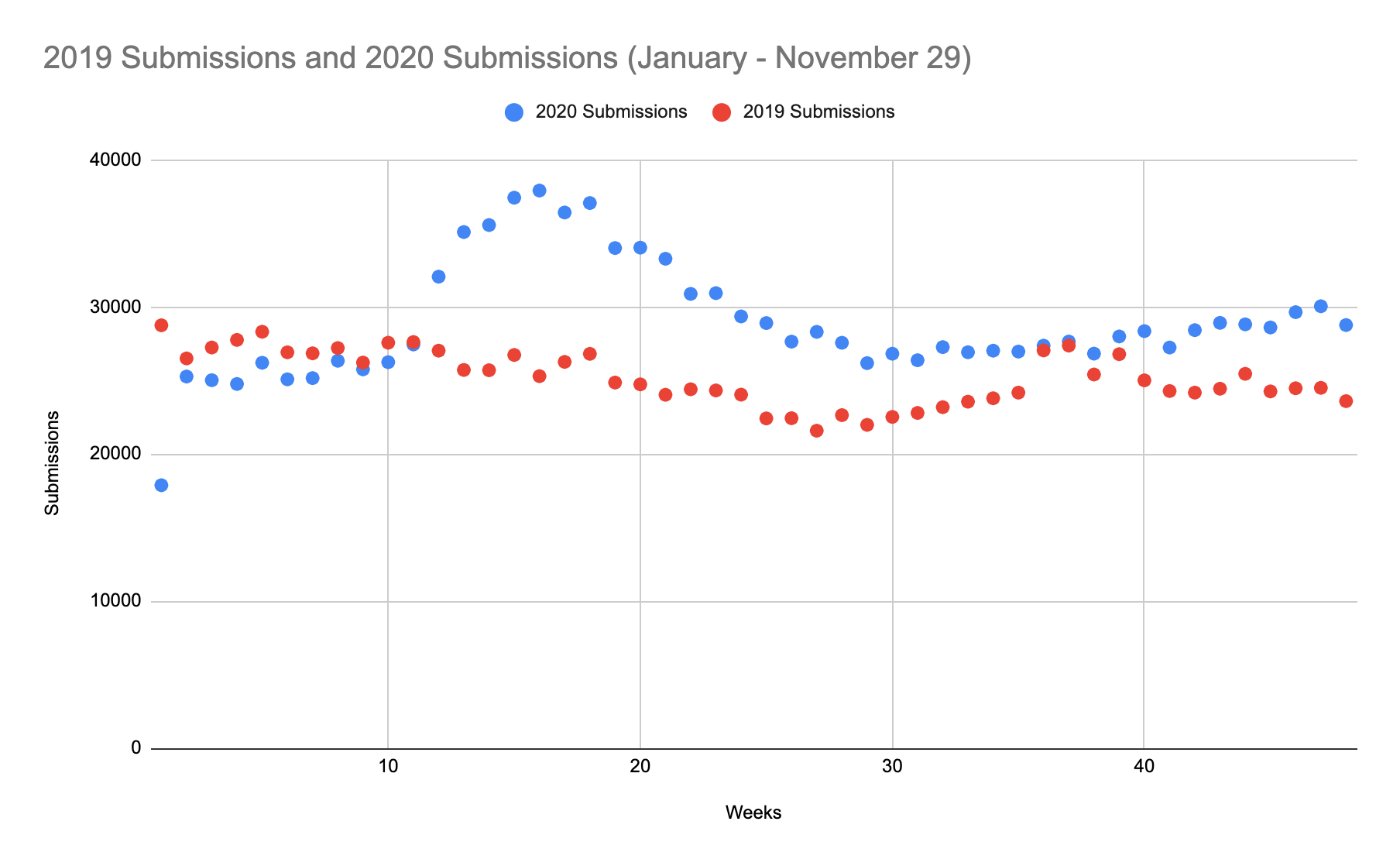 The number of weekly submissions rose — and remained at a high — for the majority of 2020, presumably because we became homebodies. Week 16 (April 13 to April 19) saw the most significant year-over-year increase in submissions, with 2020 leading 2019 by over 12,000 submissions. That difference is almost as large as the first week of the year, where 2019 held-off being eclipsed by 2020 submissions by a little over 10,000. 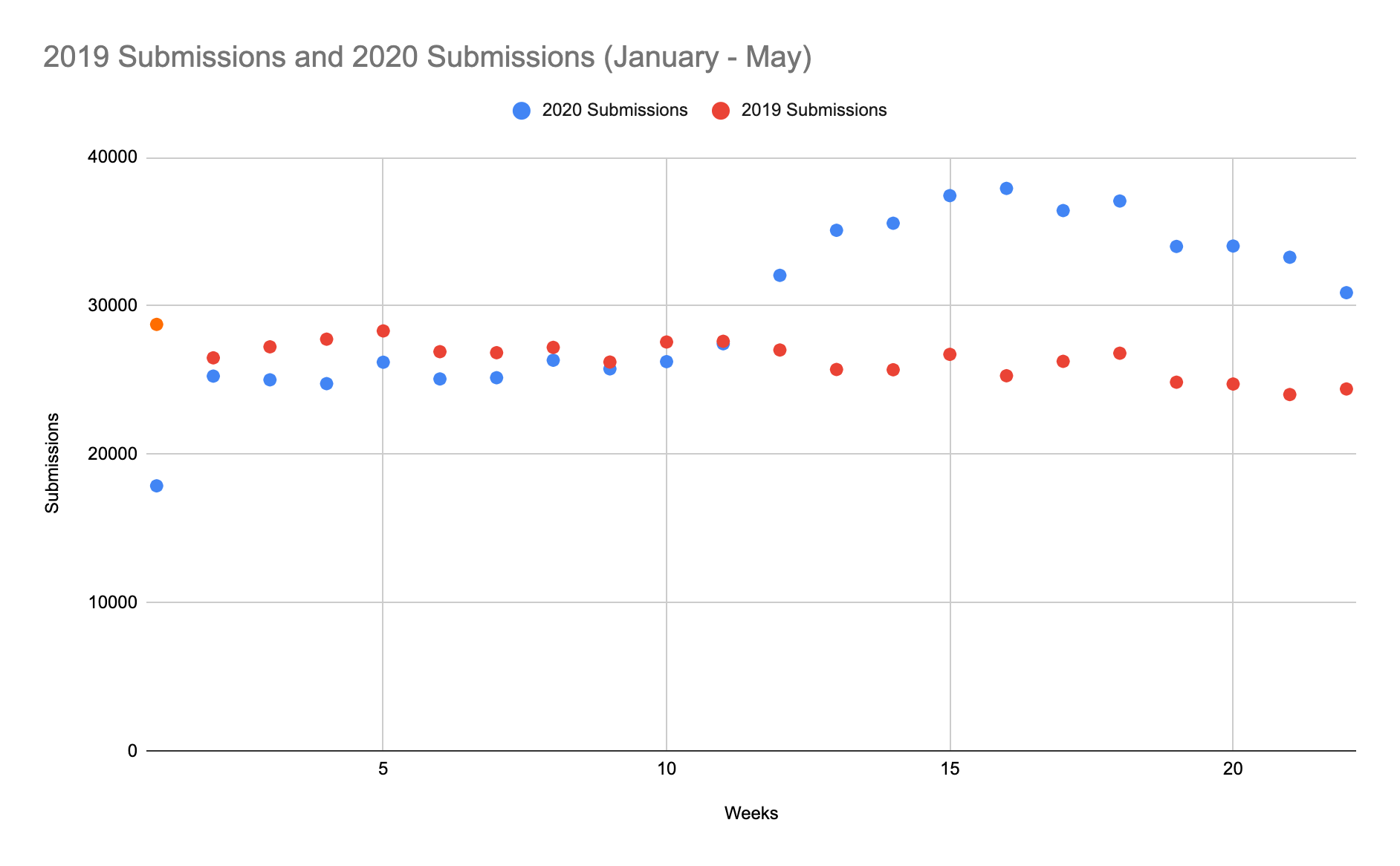 While things have slowed down lately compared to that early-2020 bump, there has yet to be a single week this year after March with fewer submissions than 2019. Since January, we’ve seen a steady flow of 25,000 to 30,000 submissions per week, which has yet to relent. With all this considered, it’s no surprise that we hit the 13 million-release milestone in record time!

Submissions by Style and Country

Earlier this year, we launched our regional music genre map, a new way of looking at the myriad music styles in the Database. While Discogs is the world’s foremost physical music database, there are still plenty of empty genres and styles that have yet to be fully fleshed out. 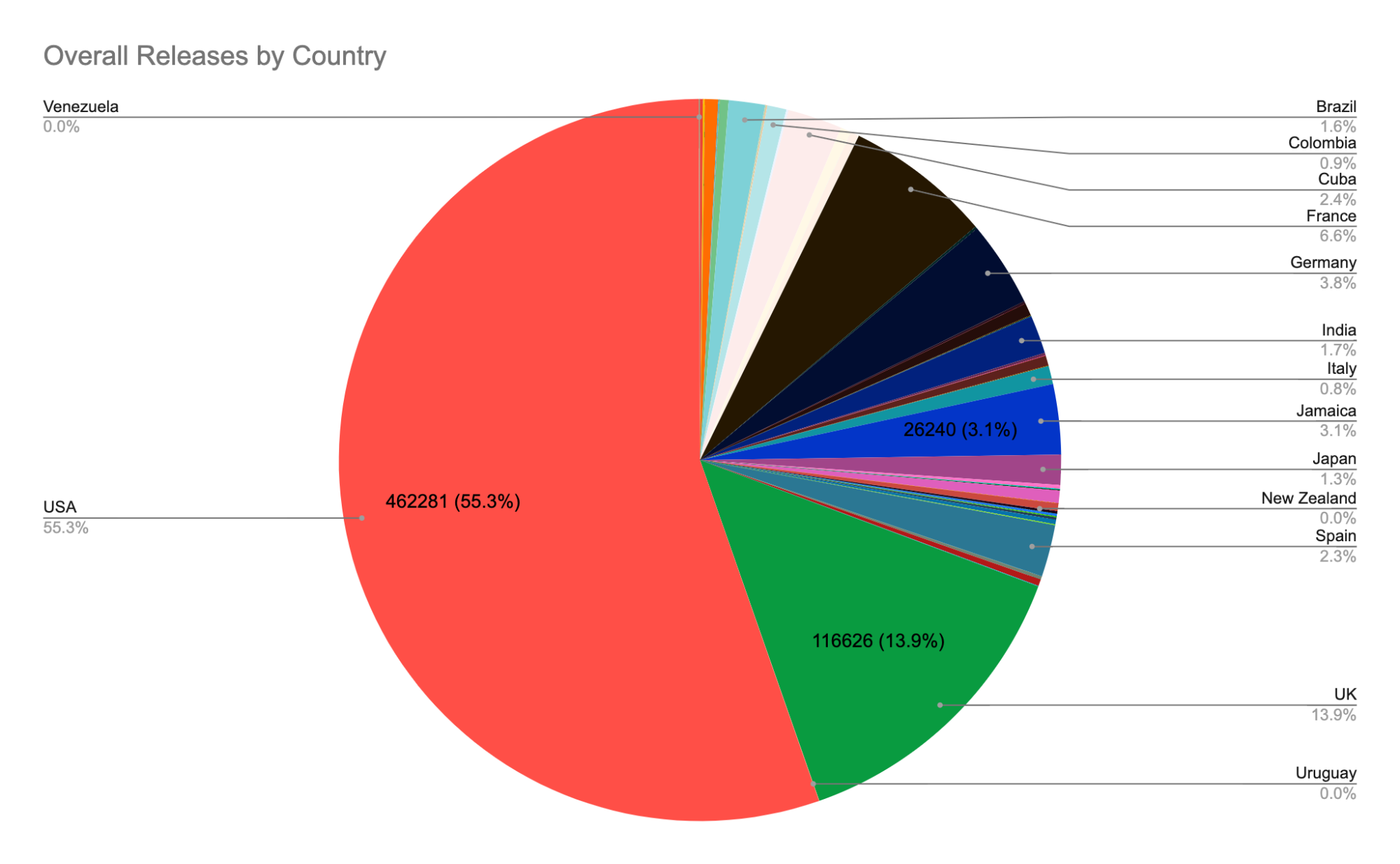 While it’s no surprise that releases from the United States and the United Kingdom dominated, 2020 saw submissions in every style and genre from around the world, from funkot, an energetic type of dance music originating in Indonesia, to descarga, Cuban improvisational music that pulls in other styles such as bolero and rumba. 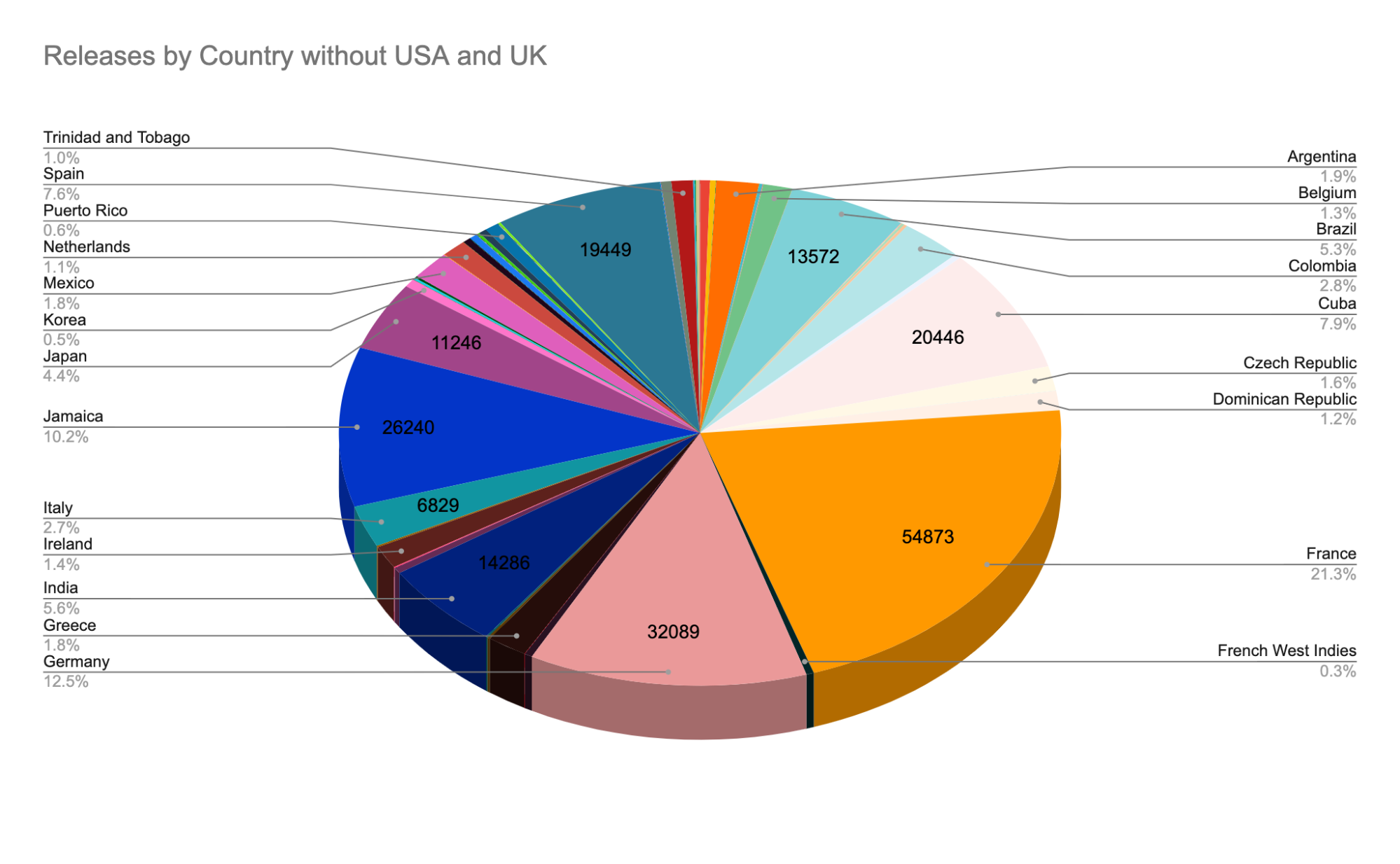 These charts do not consider all submissions, but only submissions with styles and genres linked to a specific country in the regional music genre map. As mentioned previously, the U.S. and UK were so dominant that they were removed from the second pie chart so we can get a better glimpse of contributions from other countries.

No big surprises here. Vinyl is king with nearly 45% of all submissions, though the humble CD wasn’t too far behind at 30%. Much has been made about the decline of the CD during vinyl’s now decade-plus resurgence, but it has managed to put up a fight in both submissions and sales. 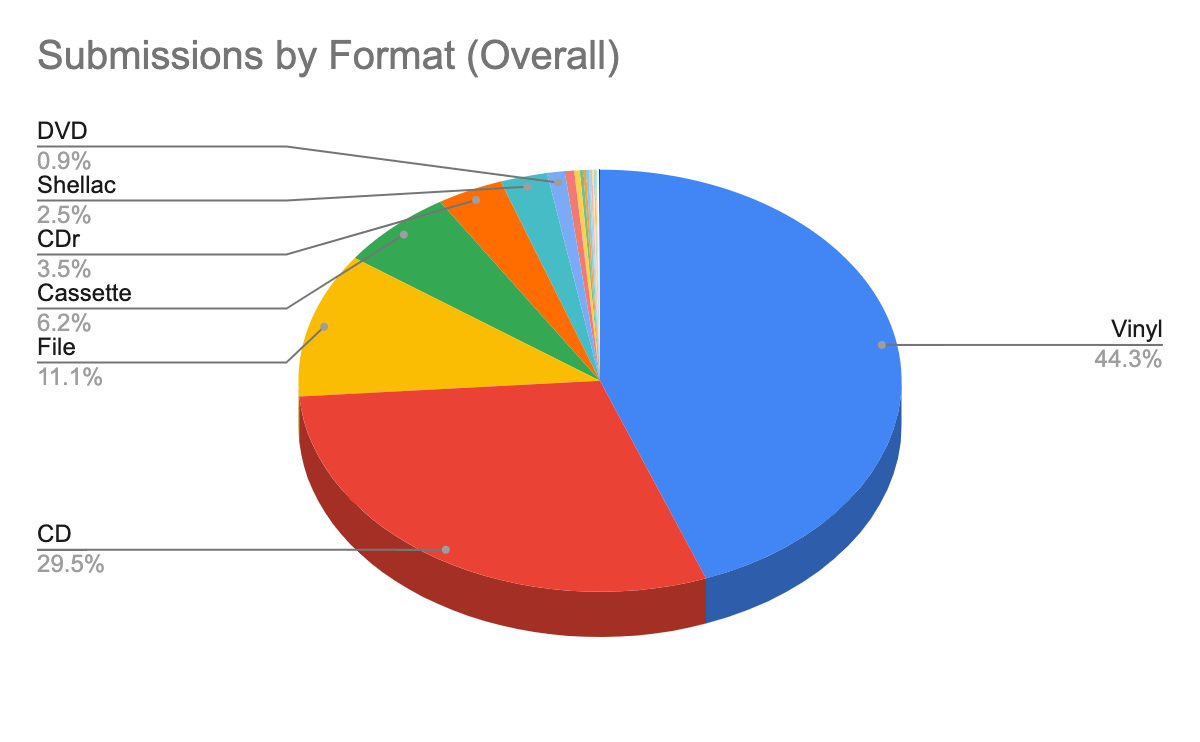 As you can see in the chart below, there’s less than a 25,000-submission difference between vinyl and CD. 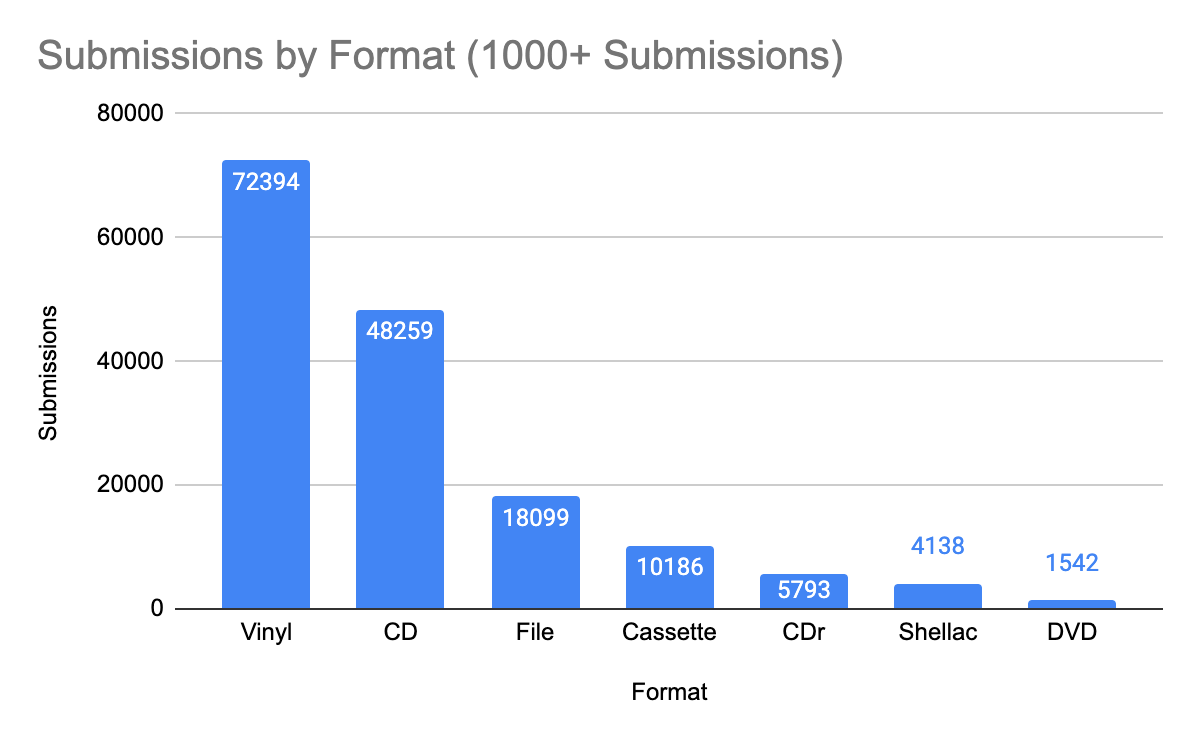 Just for fun, below are all of the formats that received more than 10 submissions (sorry Minidiscs) but less than 1,000. It’s interesting to see archaic formats like the classic VHS and the 8-track beat out the SACD, a format that is still produced. Then again, shellac submissions are still up in the thousands. 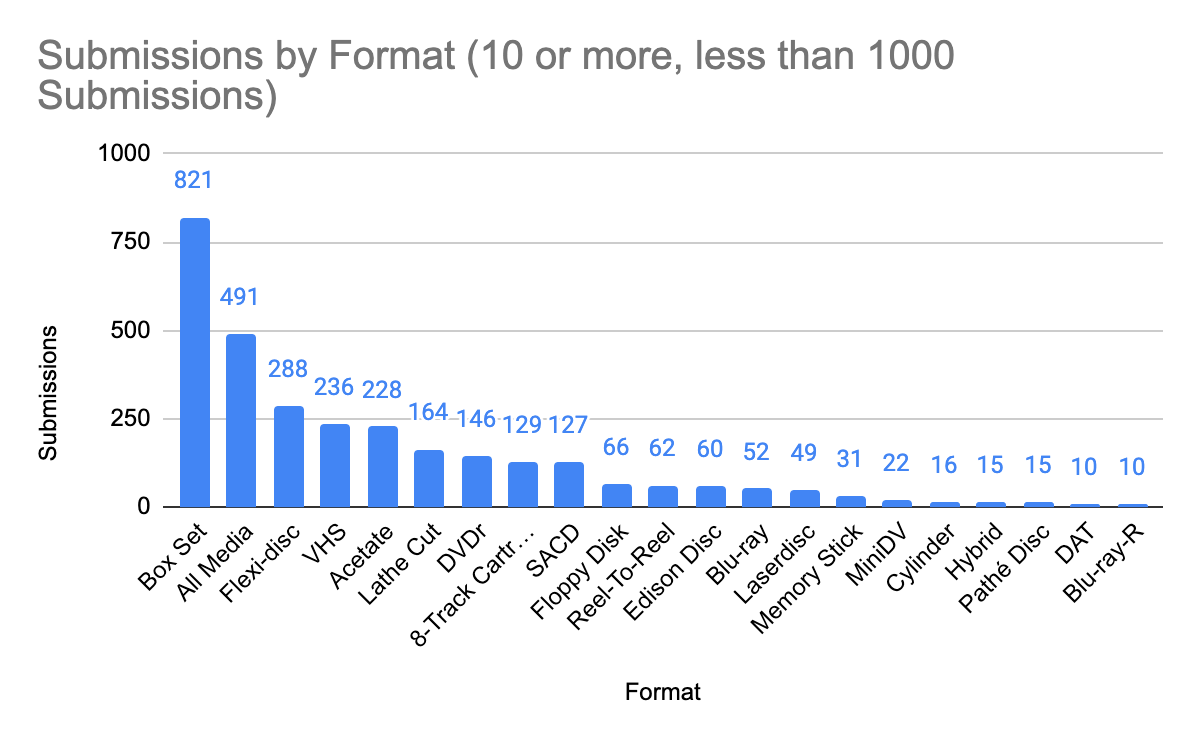 If you’re interested in learning more about these formats and how we define each, check our guide.

For the uninitiated, the September Pledge Initiative (S.P.In.) is our annual submission drive to get as many previously unarchived releases into the Database as possible. Considering the massive influx of submissions this year and the hard work of Discogs contributors, S.P.In. felt better spent celebrating the Discogs community and highlighting those Herculean efforts that have already been spent in the Database. We shone the spotlight on some of the unique contributors to the Database:

However, that doesn’t mean the Database didn’t grow even more over September! If we’re still comparing 2020 to 2019, submission volume in the first two weeks of September 2020 was neck-and-neck with 2019, with 2020 beating 2019 by only 400 total submissions over that time period. 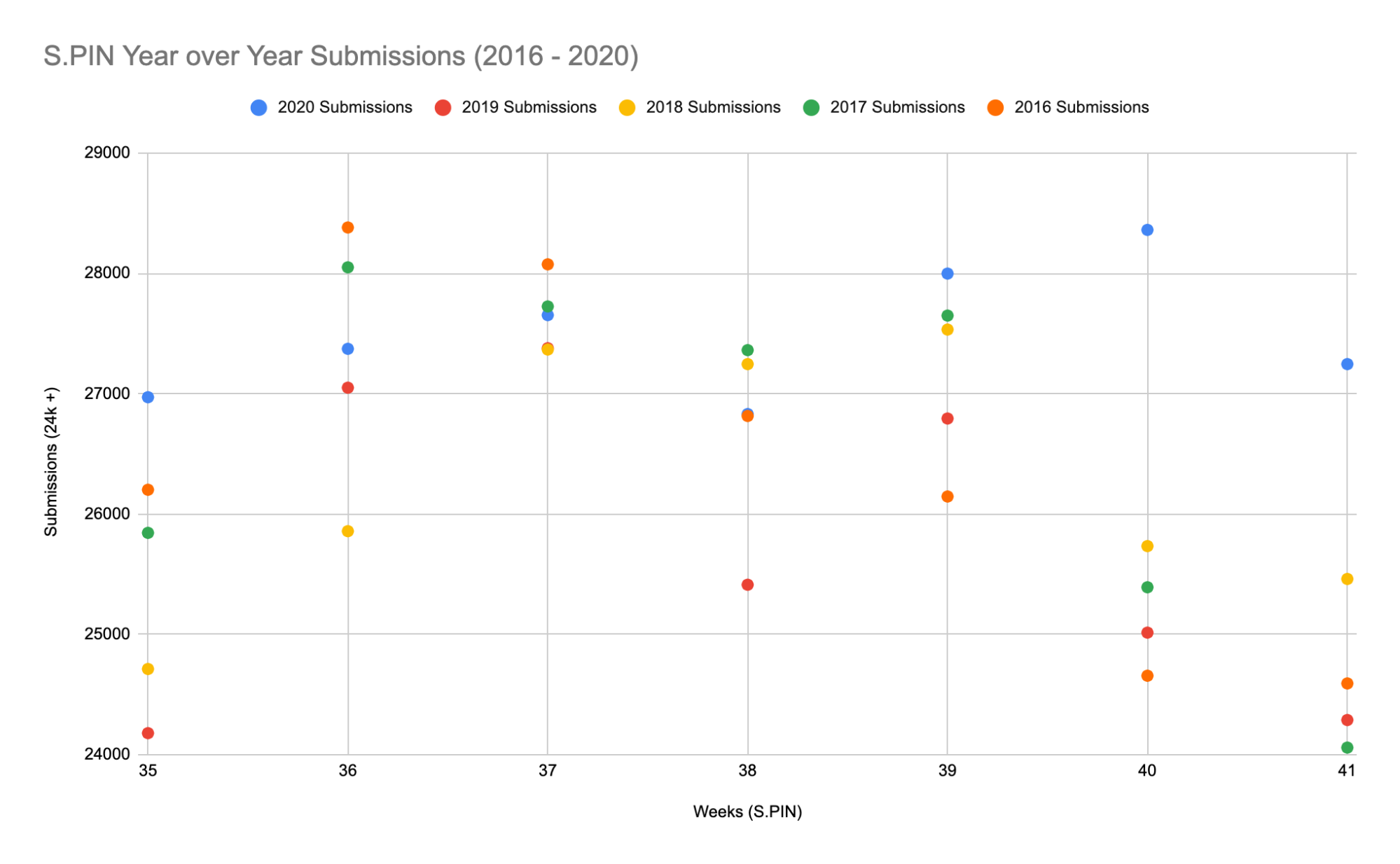 However, if we look at things over the whole of September, S.P.In 2020 saw a dip in submissions around mid-month. As you can see, 2020 held on to a stable third place compared to 2017 and 2018, before slightly pulling ahead on week 39 (September 21 to September 27), before regaining a hefty lead.

Looking at the past five years, 2020 has been the Database’s strongest yet. Just to point it out again, do you see how low the first week of 2020 was? It was the Database’s lowest week for submissions since 2016’s limp finale. 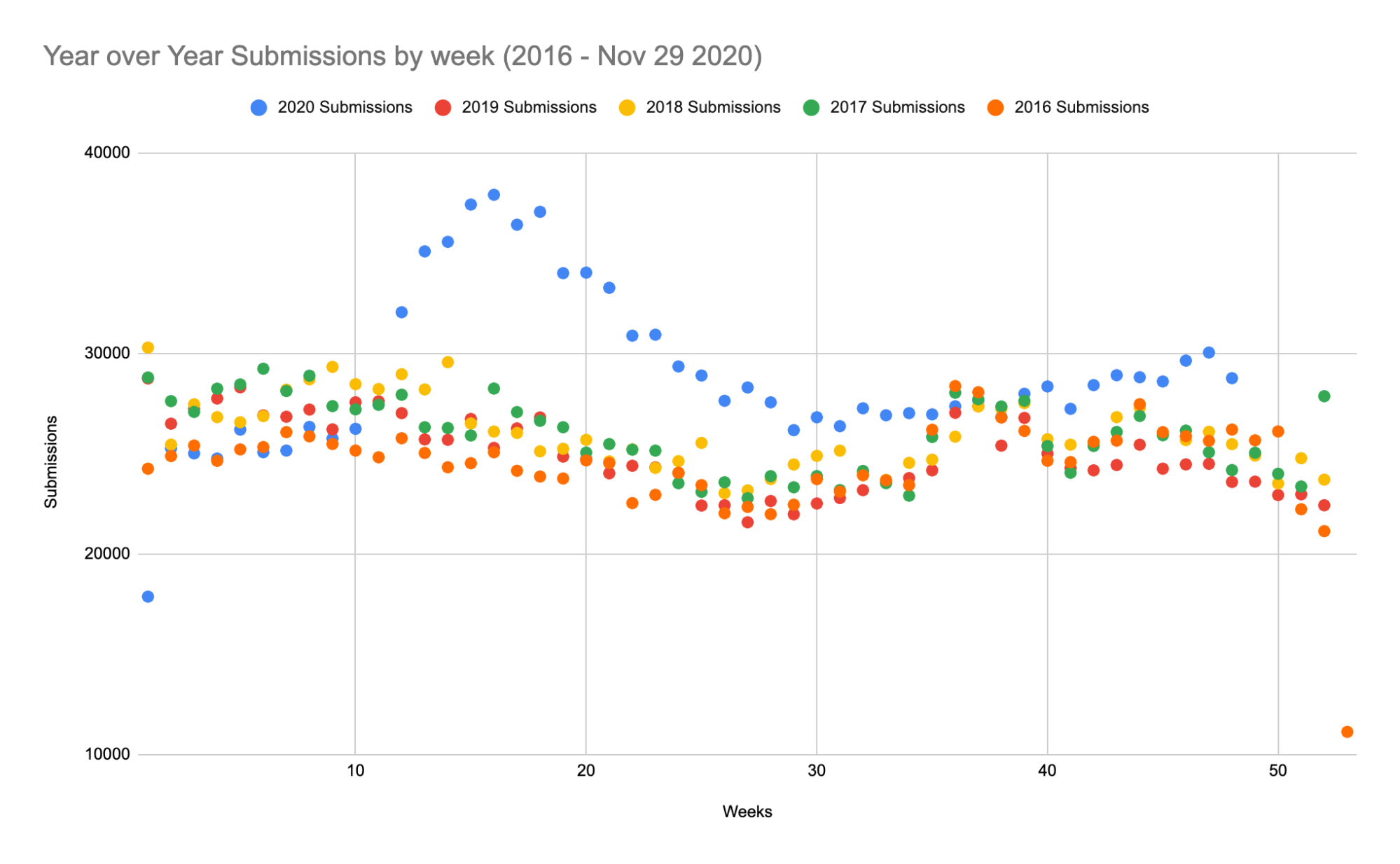 Even when you exclude all of December’s potential submissions, 2020 holds a sizable lead over the past few years. It’s truly incredible to see the Discogs Community come together for the love of music despite the difficulties of this year — heartwarming stuff just in time to give us a glimmer of hope for 2021. Are you interested in contributing? Get started with our introduction to contributing guide. 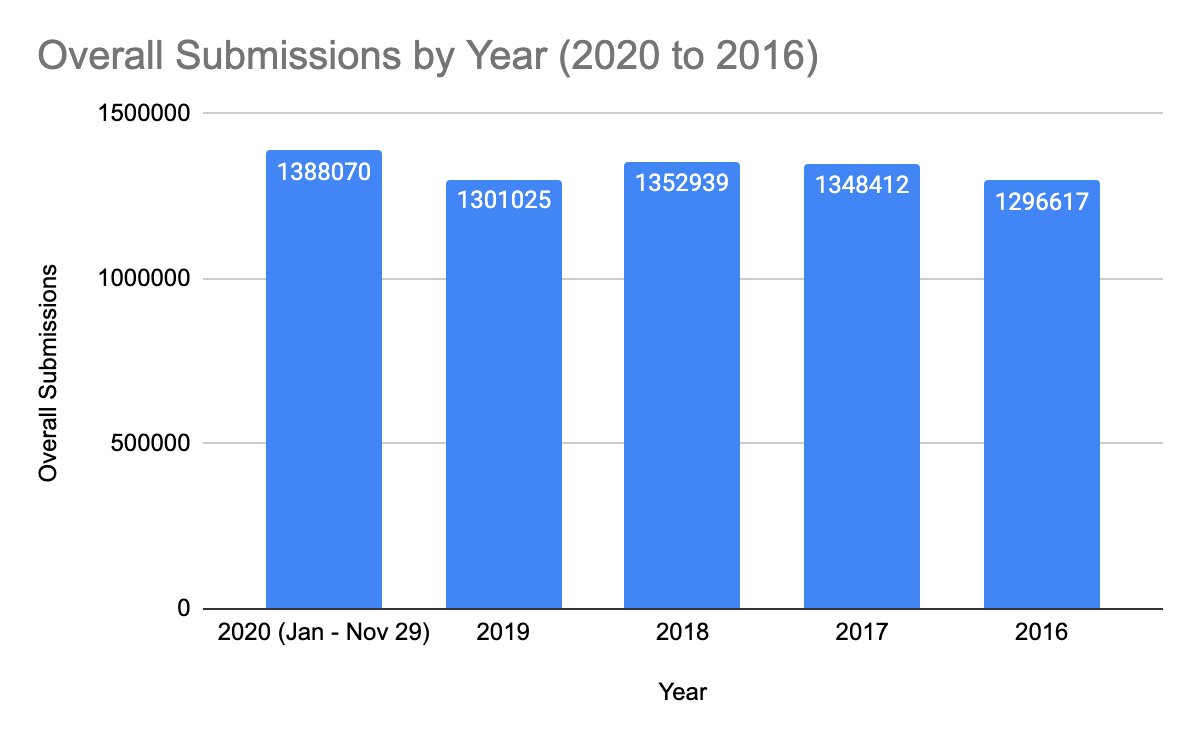