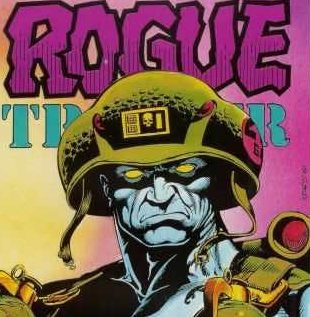 Word’s out that Duncan Jones is gearing up to take on a film adaptation of beloved comic series, 2000 A.D. Namely, Rogue Trooper.

Best known for his directorial work on Moon, Source Code and  Warcraft: The Beginning (oh, and being David Bowie’s son), Jones is no stranger to the comic/gaming genre and fantastical worlds.

If you’re not already familiar with this cult series, humbly self-styled as ‘the galaxy’s greatest comic’, you’ve got a lot to catch up on – the British weekly is now in its 41st year.

Strangely, despite the many Marvel and DC movies we’ve seen hit the cinema over the past few years (heck, this year alone), Hollywood has clearly been resistant to take on 2000 A.D. beyond breakout character, Judge Dredd (1995 and 2012). The reason is anyone’s guess, but it could be the rebellious undercurrent that runs through 2000 A.D., feeding its black humour, satirical anti-establishment vibe, and hyper-violence, that might make it more of a gamble when it comes to the box office.

Jones himself noted the sting as Marvel and DC release film after film. It makes the excitement of finally bringing the “seminal British spun war yarn” to the big screen all the more thrilling.

Here’s what you need to know about the star character ahead of the film release:

Inspired to check out the comics? Check out Rogue Trooper comics and more from 2000 A.D. on Comicogs!