This month our spotlight is on the second, updated, edition of the coffee-table book Dust & Grooves: Adventures In Record Collecting. The 436-page photo book is completely dedicated to vinyl collectors and their collections.

The idea for the book came about when photographer Eilon Paz, who is a record collector himself, moved from Israel to New York. He used his spare time to photograph collectors with collections bigger and more weird than his own, and eventually started travelling to visit collectors all over the world: From Argentina and Cuba, to Australia and Ghana. The photos were shared via the Dust And Grooves website initially, and after that were documented in the book, consisting of 250 full page photos and 12 full length interviews with avid collectors including The Gaslamp Killer, Kieran Hebden, Gilles Peterson, Joe Bussard and Ahmir “Questlove” Thompson.

We spoke to writer, record collector, DJ and editor of Dust & Grooves Sheila Burgel about the book, her passion for girl-pop and her collection.

Discogs and Dust & Grooves are similar in the way that we are both striving to document as much information about records as possible, to prevent it from getting lost. How did you get involved in Dust & Grooves?

I had been following Dust & Grooves on the web, and noticed that there was only a small sampling of female collectors featured, so I decided to put myself forward and email Eilon with details of my collection. He got back to me immediately, we did a photo shoot and interview, and when it came time to put the book together, he asked me to come on board as editor. I think having years of record-collecting experience and familiarity with the lifestyle made editing a book about vinyl and collectors a natural and thrilling fit.

When did your love for records start?

It was the moment I laid eyes on a friend’s stash of original France Gall EPs—mouth-watering French Philips picture sleeves of France’s ’60s yé-yé girl-star—that I really fell hard for vinyl. Of course as a kid growing up in the 80s, I listened to all my music on vinyl, but I didn’t become a conscious collector until I was 18, when CDs were in and vinyl was out, and I became infatuated with female-fronted pop from the 1960s. Those France Gall EPs changed everything. The moment I left my friend’s house, I began digging and haven’t stopped since. 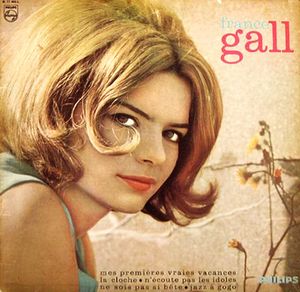 You are a well known collector yourself. What does your collection look like?

Where do you like to go digging for records?

The Allentown 45s + 78s show is my #1 spot! Also the WFMU record fair, homes of various dealers (if I lived in Paris, I’d be at Victor Kiswell’s flat every week), local record stores, eBay, Facebook soul-sales groups, and of course, Discogs!

Do you use Discogs often? Which record was your latest purchase?

Every single day. It’s my first port of call for buying records on the web. My latest Discogs purchase was Helene Smith’s “You Got To Be A Man” on Phil-LA of Soul from 1969. I also have a weekly radio show (‘Sophisticated Boom Boom With Sheila B.’) on WFMU, so I use Discogs to double check label information and release dates. How did I ever live without it??!

And the most difficult question for any collector I guess: What record in your collection is the most special to you and why?

At the moment it’s an LP I picked up on a recent trip to Israel. I just happened to stumble upon this record store in Jaffa, where my friend pulled out an album with a sleeve I recognized (I had first heard it at the flat of record dealer Victor Kiswell, but couldn’t afford to buy it). The moment I realized it was an original copy of the Grazia album (a Turkish teenager who recorded this VERY rare and mind-boggling psychedelic album in the 70s), I could barely breathe. It was in near-perfect condition, but I had never spent that kind of money on a record. So my friends suggested I give myself a 24-hour-waiting period. I was tossing and turning all night just thinking, Grazia! Grazia! Grazia! I had to have it. So I returned the very next day and made the most significant LP purchase of my life. And it was worth every penny!

Back to Dust & Grooves: What is your favorite interview in the book and why?

The interview with Jonny Trunk, a London-based collector who specializes in the most wonderfully whacked out records involving religion, horror, sex, and suicide. The photos of his collection make for unbelievable eye-candy, and he’s a real character—witty, funny, silly, and nerdy in the best way. Who else would buy a record called “The Fabulous Whistling Nun presents the Sound of Music”?

Do you have an Interview Wantlist? If you could choose any person to be in the book, who would that be and why?

Oh yeah. There are loads of collectors we would have loved to feature in the book. Aside from the celeb collectors like Quentin Tarantino and Matt Dillon, I would’ve loved to interview a serious collector of metal (preferably Scandinavian death metal), as that’s a whole scene unto itself and I have special place in my heart for metal.

What can we expect from Dust & Grooves in the near future?

We’re about to hit the road for a book tour supporting this new edition of Dust & Grooves on Tenspeed. And we’re also working on getting more interviews up on the site, specifically with collectors Sam Swig, who specializes in Swedish and Middle Eastern psychedelia, and Victoria Rawlins who collects everything. They are some serious cats!