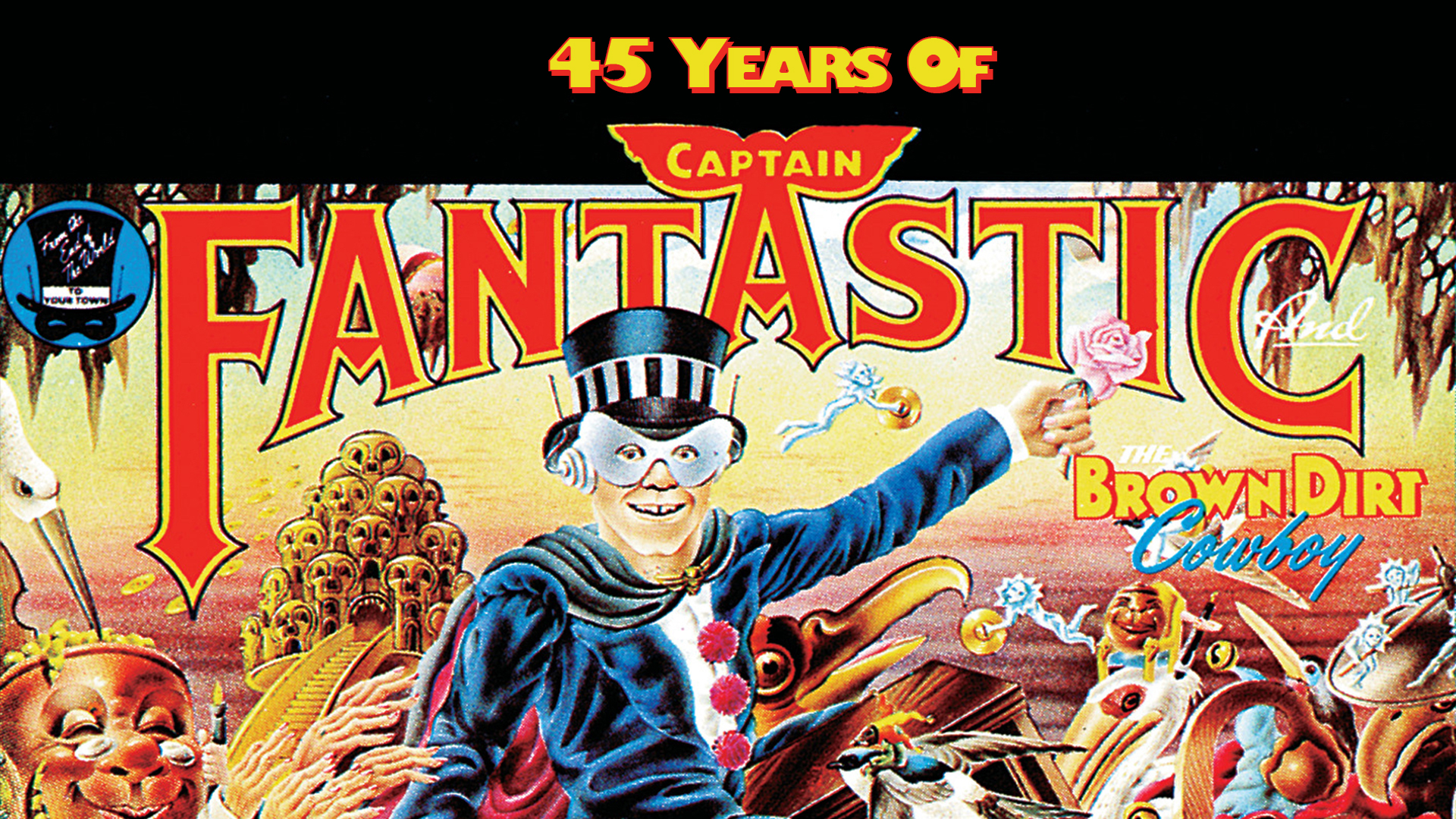 With so many incredible hits already under his belt, it now seems surprising that it was not until his ninth studio album- Captain Fantastic And The Brown Dirt Cowboy– that Elton John entered the Billboard top 200 in the US at the number 1 spot on the first week of release. The LP was rumored to have sold 1.4 million units within the first four days of hitting the shelves, an incredible accomplishment for any artist, and one rarely topped to this day. However, the Soundscan method for tallying how many individual sales any piece of product accumulated was not introduced until 1991, making the astounding John number officially unofficial. However, it would place him at having the seventh fastest-selling record of all time, smack dab between two releases by his 2001 Grammy duet partner, Eminem (2004’s Encore coming in at 1.5 million first-week sales, and 2002’s The Eminem Show with 1.3 million, respectively). Captain stayed at the top spot for almost two full months, only being toppled off by Venus and Mars by Paul McCartney’s Wings. Captain has been praised as a high watermark for John and long-time lyricist Bernie Taupin, simultaneously becoming an instant commercial smash and a pinnacle of artistic creativity. What is the special magic of Captain Fantastic almost five decades later that still has critics like Rolling Stone placing it amongst the top 500 albums of all time?

It may arguably be the then unique combination of elements that the John / Taupin duo introduced together that has made such an enduring and endearing mark on pop culture. Long before Garth Brooks premiered Chris Gaines or Beyoncé and her Sasha Fierce persona were even birthed, John presented the characters of Captain Fantastic (himself) and the Brown Dirt Cowboy (Taupin). The songs tell, in chronological order, the trials and tribulations of the partners, using their assumed characters as stand-ins for the real artists. The tracks weave an autobiographical story, one building on another, constructing a timeline of the hardship and highs experienced by the two struggling aspiring creatives. Starting in London circa 1967, the LP follows Captain/John / Cowboy/Taupin to the 1970s, when stardom finally comes within reach.

Unlike other John albums, only one cut was released as a single from Captain Fantastic. One reason could be that each song exists within the context of the overall encompassing theme and narrative of the album; while other records may have a handful of punchy, obvious hits, putting on Captain is an audio journey for the listener. The opening title track has a bluesy, almost Laurel Canyon country-rock vibe for almost the first four minutes, before breaking into a snazzy, up-tempo groove for the closing section, as it introduces ‘Captain Fantastic, raised and regimented, hardly a hero /Just someone his mother might know’ and ‘Brown Dirt Cowboy, still green and growing.’ Second track ‘Tower of Babel’ brims with youthful determination clashing with some of the harsher realities of the music business (though lines like ‘this closet’s always stacked’ sitting next to biblical references ‘Sodom meet Gomorrah, Cain meet Abel’ have led some to argue the song is about being gay). ‘Bitter Fingers’ revolves around the frustration of having to write songs for other people and has a down-up speed as John warms to his topic: a ghost of Christmas future scenario, as he sees ‘At the keyboard player’s hollow haunted eyes /It seems to me a change is really needed.’ The mish-mash of styles is most apparent on the evocative, ‘Tell Me When the Whistle Blows.’ It opens with a disco-like beat which would not be out of place at Studio 54 before bluesy guitar comes in to punctuate the lyrics of fading youth, fading hope and time running out: ‘Long lost and lonely boy / you’re just a black sheep going home.’ Side 1 closes with the singular single, the beautiful ‘Someone Saved My Life Tonight.’ The track is based on a pivotal moment in John’s own life. Engaged in the 1960s to Linda Woodrow- heiress to millions made by her father in the fish industry- John was still coming to terms with his own sexuality while trying to still find success with songwriting partner and then roommate Taupin. In the aftermath of the relationship breaking down, John attempted a half-hearted Sylvia Plath style suicide, opening all the windows in the apartment before inserting his headset upon a pillow- into a gas oven set on low. The twinkling drums and lush piano of the opening bars still bring a shiver- even on the zillionth listen. While ‘Someone’ stands by itself as a timeless anthem, set amongst the continually unfolding narrative of Captain, it shines as both a storytelling device and a grand punctuation to not just half of the album being completed but to a chapter in life coming to an end. Closely looking at the lyrics and knowing John’s own struggles makes the track even more harrowing and a timeless ode to the universal theme of self-acceptance. 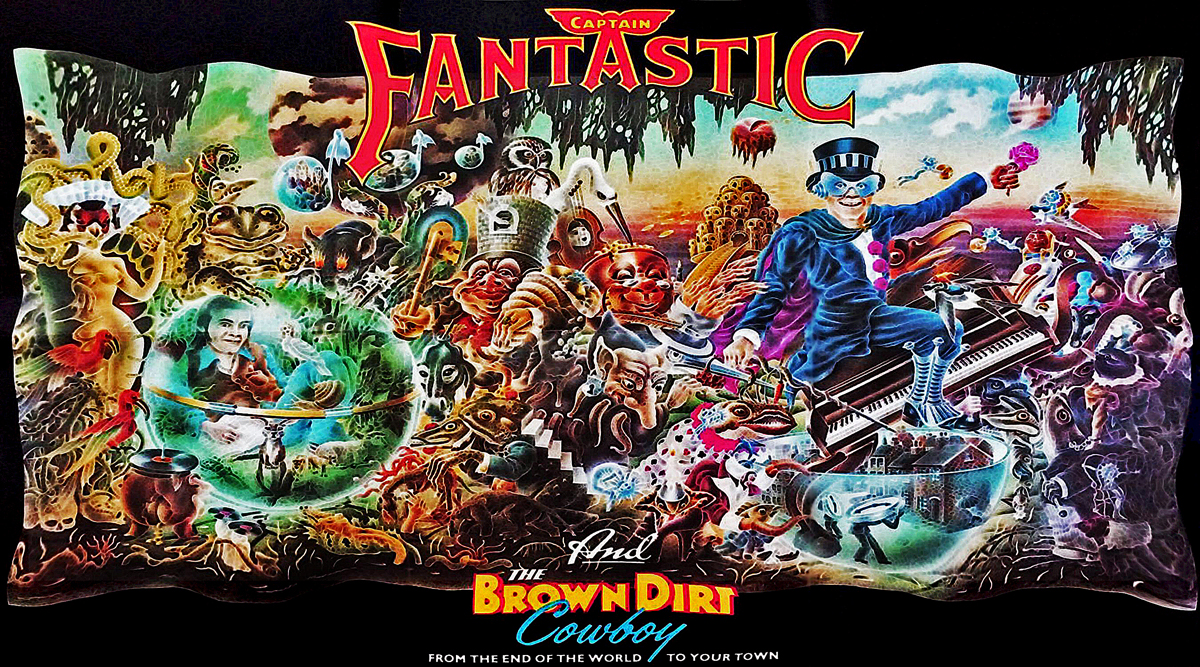 From the depths of kitchen appliance despair, Side 2 opens with the deceptively rocking ‘(Gotta Get A) Meal Ticket.’ The poppy singalong almost disguises the rather dire lyrical content, as the Captain and the Cowboy grapple with the realities of landing a record deal: ‘When the line’s been signed / You’re someone else / Do yourself a favor, the meal ticket does the rest.’ ‘Better Off Dead’ continues to illustrate the conflict between authenticity and what is needed to survive in the industry, while ‘Writing’ is another upbeat ditty, a mid-century homage to the activity of its title. ‘We All Fall in Love Sometimes’ is classic John ballad, the gooey sentiment ending on a disconcerting and unexpected tome of ruin: ‘Running with the losers for a while /But our empty sky…’ Appropriately named closing song ‘Curtains’ captures the often clashing rupture between what success seemed it would be and what it actually is, as John croons, ‘You must have had /A once-a-upon-a-time.’

The zany colourful cover of the LP is part psychedelic, part glam explosion, and encapsulates the varied themes, feelings, and content held between the grooves. Captain is also the last time that the ‘classic’ John band line-up of guitarist Davey Johnstone, bassist Dee Murray and drummer Nigel Olsson would appear together on vinyl during the 1970s, perhaps providing yet another layer of experience and forthcoming melancholy to the proverbial mix. All of these elements together have elevated Captain Fantastic and the Brown Dirt Cowboy to more an encompassing experience to be traveled- not just an album. A rock opera of intense peaks and valleys, it captures excited hopefulness of youth with the often unglamorous and unforeseen decisions necessary to fulfill your dreams and simultaneously be your authentic self.