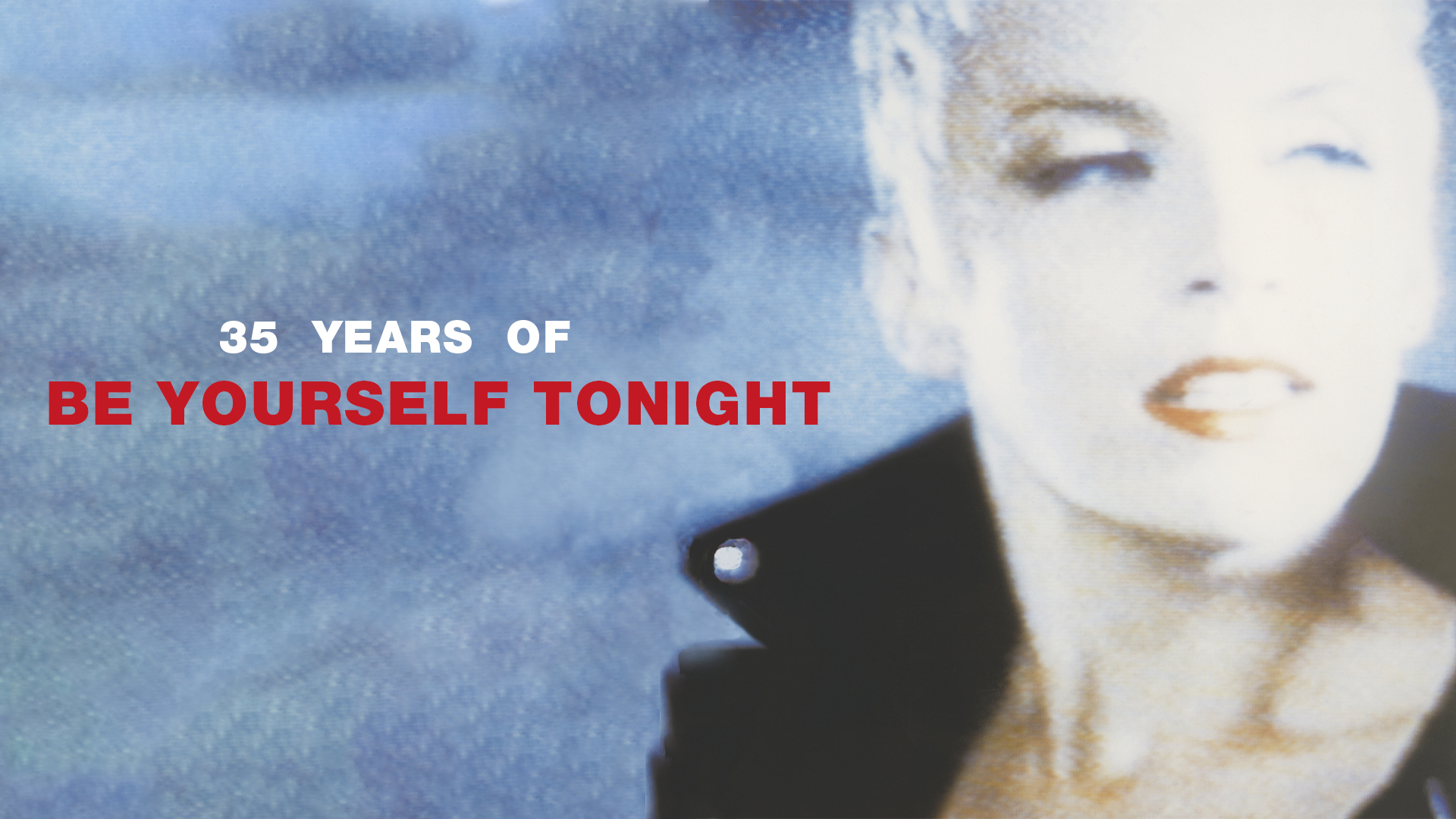 You can honestly count on your fingers (and maybe your toes too, if you are being generous) the number of bands who have several albums that are now timeless records- Albums that could have been put out fifty years ago or today- it doesn’t matter. The ideas, the innovation, the lyrics, and arrangements are fresh and exciting, even on songs that you have heard a zillion times. As Bowie has the ‘Berlin Trilogy‘ (consisting of Low, Heroes, and Lodger)- a set of albums he said represented the ‘DNA’ of his art- the Eurythmics have an arguably similar divine triad. In their case, it starts with their second studio album, Sweet Dreams (Are Made of This), then goes to Touch, concluding with 1985’s Be Yourself Tonight. Eurythmics ‎– Be Yourself Tonight (1985)

The Eurythmics Lean Into Their Pop Sensibilities

By the time this fourth studio album was released, the band had already cemented themselves a reputation as new wave provocateurs on both sides of the Atlantic, combining the experimental sounds and production of Dave Stewart with the soulful vocals of the androgynous Annie Lennox. The duo were one of the first groups to use the newly minted platform of MTV to introduce fans to their unique mix of synthesizers, Motown funk, and often, a sumptuous horn section. Their fan base was primed for the deviation from the inventive mix the two were known for, as Be Yourself Tonight leaned more into their pop sensibilities than previous albums while putting the influences of some of their favorite R & B inspirations front and center on many of the songs. Though recorded mostly in Paris, the duo also spent time in Detroit during the creation of the album- and the sounds and spirit of the city are apparent from the first track, ‘Would I Lie to You?’ The unapologetically blue-eyed soul format of the song comes complete with a doo-wop of backing vocals and a full-horn section. It is an aggressive foot-stomping theme of empowerment, Lennox proclaiming that she will, ‘…make it make it’ as she ‘walks out the door.’ The lyrics have a tinge of an homage to Louis Jordan and his ‘Beans and Cornbread’ classic, with the repeated reprieve of ‘I’ve packed my bags /I’ve cleaned the floor’ colliding with James Brown‘s JBs, as a wide array of bright brass plays an equally starring role throughout the tune. The video itself – a strange hybrid of Streets Of Fire and an inverted Pat Benatar-style’ Love is a Battlefield’- premiers Lennox with bleached hair, earrings and a glittery dress, a feminine departure from earlier red-haired gender-bending incarnations.

In anyone else besides Stewart’s hands, the second track, ‘There Must Be an Angel (Playing with My Heart)’ would be an abrupt and jarring transition from the revved-up adrenaline of the opening song. Yet the celestial, dreamy quality of Lennox’s vocality is soft and idyllic, an ode to the magic of love: ‘No one on earth could feel like this /I’m thrown and overflown with bliss.’ The juxtaposition of leaving a bad relationship in ‘Lies’ with the opening of one’s heart found in ‘Angel’ complement each other perfectly, as they share the idea of possibility on each end of the relationship spectrum. A groovy harmonica solo towards the end of the song, courtesy by none other than Stevie Wonder, provides the continuous thread of upbeat flavour. The album’s third single features none other than the Queen of Soul, the legendary Aretha Franklin. Franklin’s appearance solidifies the band’s respect and acknowledgment of their heritage, as Lennox and the Queen trade off lines in the anthemic ‘Sisters Are Doin’ It for Themselves.’ There are few singers who could go toe to toe with the incomparable Franklin- and Lennox proves up for the task. The song is a mash-up styles that all somehow work together. There is the Van Halen-esque guitar solo of Stewart mid-song, an almost Village People inspired repeated reframe of ‘Huhs!’ and the gospel chorus sharing the bridge with Lennox and Franklin. Being released in 1985, at the very, very tail end – or perhaps the complete collapse- of second-wave feminism, there may have been no more opportune time to come out with an omnipresent song ‘…to celebrate /The conscious liberation of the female state!’ Thirty years on, with the waves of #timesup and #Metoo movements still playing out across western culture, the Eurythmics track rings truer than ever.

Let’s not forget some of the album tracks from this LP like its two full-length studio predecessors from 1983; it is on the non-single efforts that some of the most interesting and innovative work is found. ‘I Love You Like A Ball and Chain’ is a rocky evolution of Sweet Dreams’ sensual ‘This City Never Sleeps;’ it is strange it was not released as a single, as it is almost the medium ground between the first two commercial cuts. ‘Unconditional Soul’ showcases a completely different side of the group, featuring a flute solo and a vibe of smoothness more expected of a Sade album.

No Clangers, All Bangers

On its release, Elliot Murphy of SPIN equated Be Yourself Tonight to ‘an old soul review- it never lets up and is full of surprises.’ This still rings true of most of the album; there are no clangers. A couple tracks, such as fourth single ‘It’s Alright (Baby’s Coming Back)’ seem lacking in comparison to the other bangers; on another album, it may have been a stand-out, but here it seems a bit bland (though it did win a British Ivor Novello award in 1984 for Best Contemporary Song). Similarly, ‘Adrian,’ a mid-tempo, middle-of-the-road ditty pales in comparison to the bombastic jams contained on the first part of the album; not even guest vocalist Elvis Costello can add enough vroom to make it on par with some of the other glories found on the LP.

Be Yourself Tonight was an international success, going to number 3 in the UK, number 9 on the Billboard charts in the US, and cracking the top 10 in almost every other country around the globe. Sales may have been higher if there had been a supporting tour for the release, but unfortunately, the album dropped at the same time as Lennox was recovering from vocal fold nodules, making any promotional activity out of the question. Despite this challenge, Be Yourself Tonight went on to receive critical as well as commercial success, gaining a nomination in 1986 at the Brit Awards for Best British Album, and saw Stewart win in the category of British Producer of the Year for his work on the record. In the US, ‘Would I Lie to You?’ and “Sisters Are Doin’ It for Themselves’ were both nominated for Grammys.

With Be Yourself Tonight, Lennox and Stewart captured a zeitgeist, of a moment when the popular was a pastiche of R&B, new-wave and straight-up bubble gum, all appearing alongside each other in a way not previously seen or much experienced after. The lyrics, messages, and experimentation sounds as interesting and of the time as any contemporary cut- perhaps still ahead of its time, compared with the current radio waves and playlists choked with autotuned sameness. It will be interesting to see if, in another thirty years, we will still look at songs like ‘Sisters’ as equally timely or, hopefully, as a relic from a time past.