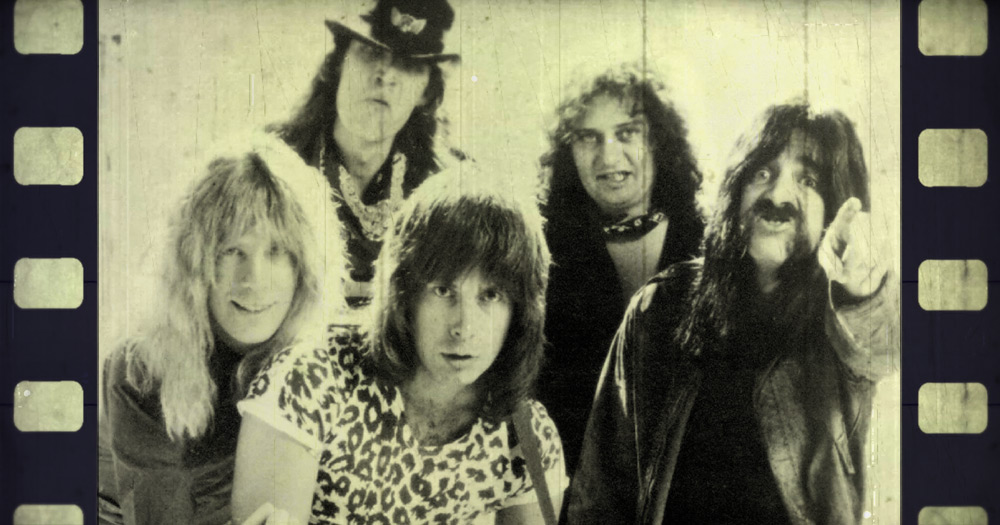 It’s a bold move, crafting a fictional band for a movie. You’re no longer bringing just characters and a plot to life, but also the unique dynamic of a band. And on top of that you’ve got to make music that isn’t terrible! Many have a hard enough time achieving just one of these things, let alone all four.

With such a tall order, you’d think the public would at least cut you a little slack, but no one is safe – not even Mick Jagger. Critics of HBO’s drama Vinyl complained that the music of British proto-punk band Nasty Bits, whose music was written by Jagger and his actor son, James, rings false in the context of 1973.

As Adam Schlesinger, veteran songwriter for fictional bands and screen like Josie and the Pussycats, Sesame Street, and Crazy Ex-Girlfriend told the Guardian, “Generally, the music’s not good enough and you don’t buy it. Just like the acting has to be convincing, the songs have to be convincing. You have to believe that this music could be popular.”

Songwriters behind these hit fictional bands often see it as an outlet for ideas that wouldn’t mesh well with their primary musical outfit; like an opportunity to explore a new genre, make up dumb band names, or try on silly lyrics.

Calling these bands fictional barely seems fair, since the music is very real, and very good. But hey, I don’t make the rules. 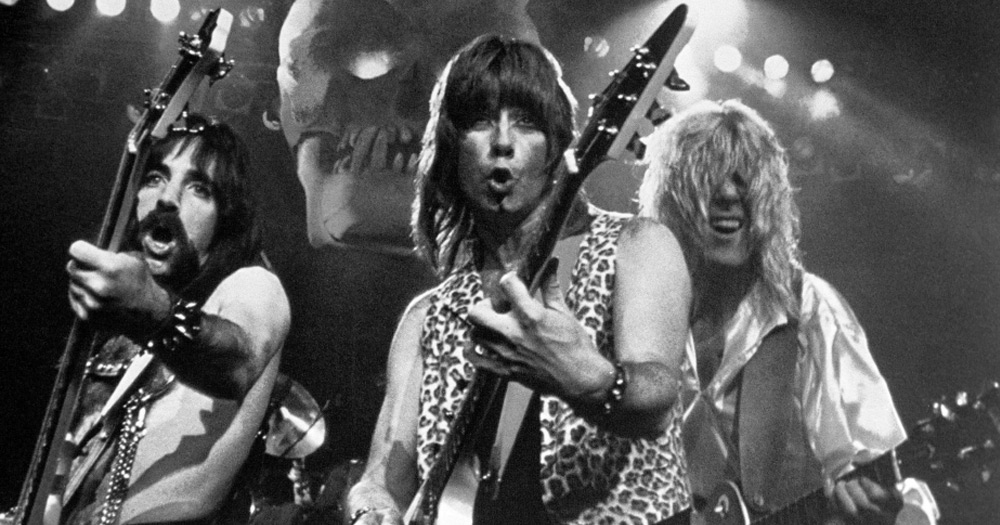 What would a list of fictional bands be without a nod to Spinal Tap. The eponymous band from the original rockumentary/mockumentary is still the best fake movie band out there. The music stands up to the weight of their ridiculous lyrics for songs like Tonight I’m Gonna Rock You Tonight, Big Bottom, and Stonehenge. Like all great bands, they reformed for a couple of albums: 1992’s Break Like The Wind and 2009’s Back From The Dead.

Cameron Crowe wrote and directed Almost Famous, basing it partly on his own experiences as a very young, aspiring music journalist who spent three weeks on the road with The Allman Brothers Band to write Rolling Stone’s December 1973 cover story.

With Peter Frampton on board as a technical consultant and writer of a few of the songs, Heart’s Nancy Wilson (Crowe’s then-wife) co-writing another couple, and Pearl Jam’s Mike McCready on lead guitar, the band was well set up for success – even if that success was also fictional. Songs like Fever Dog sound right at home alongside ’70s tracks featured in the film from Led Zeppelin, Elton John, Lynyrd Skynyrd, and The Allman Brothers Band themselves. 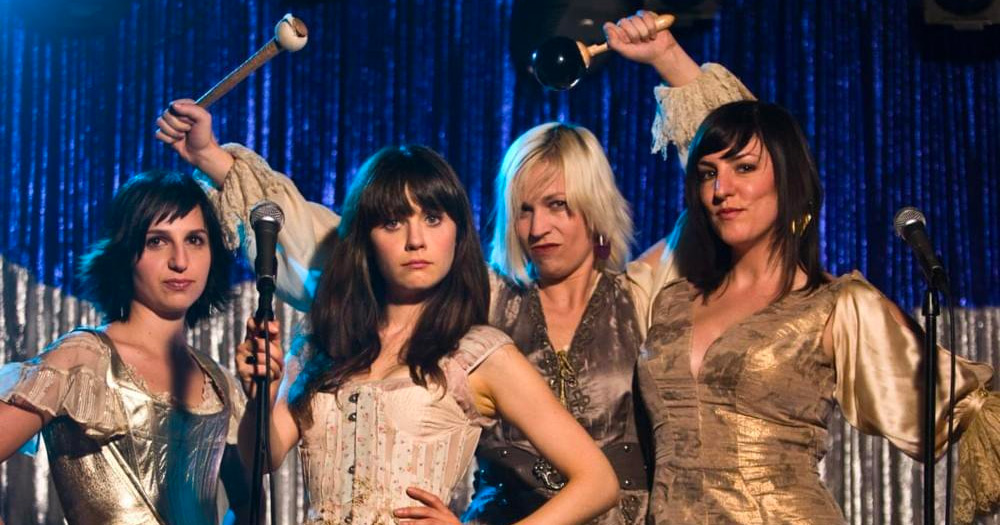 The film itself was a fairly disposable Jim Carrey comedy, but the music was good. Zooey Deschanel’s character fronts an indie synthpop band, Munchausen By Proxy, backed by real life San Francisco band, Von Iva. Together they wrote and recorded four songs for the film, with Deschanel drawing on her singer-songwriter credentials as one half of She & Him. Some DVD/Blu-ray releases have bonus footage that includes an MBP spoof MTV music documentary, complete with music videos and live performances. This is manic pixie dream girl pop at its loosest, best, and most fun. The rest of the soundtrack is also worth checking out for the Eels songs.

George Michael (not that one) from Arrested Development grew up, learned to play an instrument, and got cool. It’s a great movie, especially if you’re into the comic series and director Edgar Wright’s other films. Beck is the mastermind behind all Sex Bob-omb’s music. Sex Bob-omb is one of several bands featured in the film, including a battle of the bands scene against the Katayanagi Twins – who are also evil exes of Ramona Flowers on a mission to destroy Scott. Music from Crash and the Boys, another band on the screen is played by Broken Social Scene. 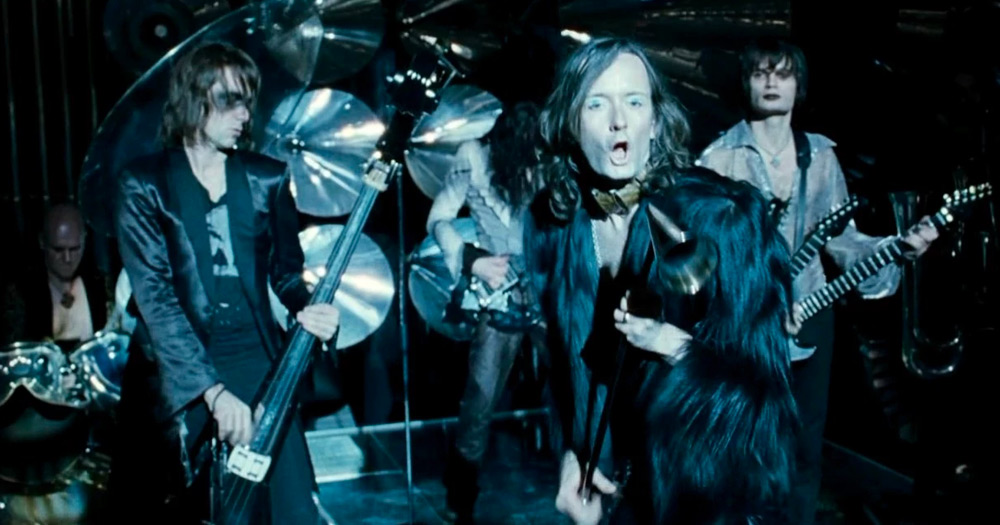 Wyrd Sisters – Harry Potter And The Goblet Of Fire (2005)

The real life incarnation of Wyrd Sisters are the ultimate ’90s brit-rock supergroup. Featuring Jarvis Cocker on vocals and songwriting duties, Johnny Greenwood and Phil Selway of Radiohead on guitar and drums, Pulp’s Steve Mackey on bass, as well as members of The All Seeing I and Add N to (X) on guitar, keyboards and bagpipes. They remain unnamed in the film due to a legal dispute between the film studio and Canadian folk band The Wyrd Sisters. Franz Ferdinand, confessed Potter-heads, were rumored to have been originally tapped to play the band. 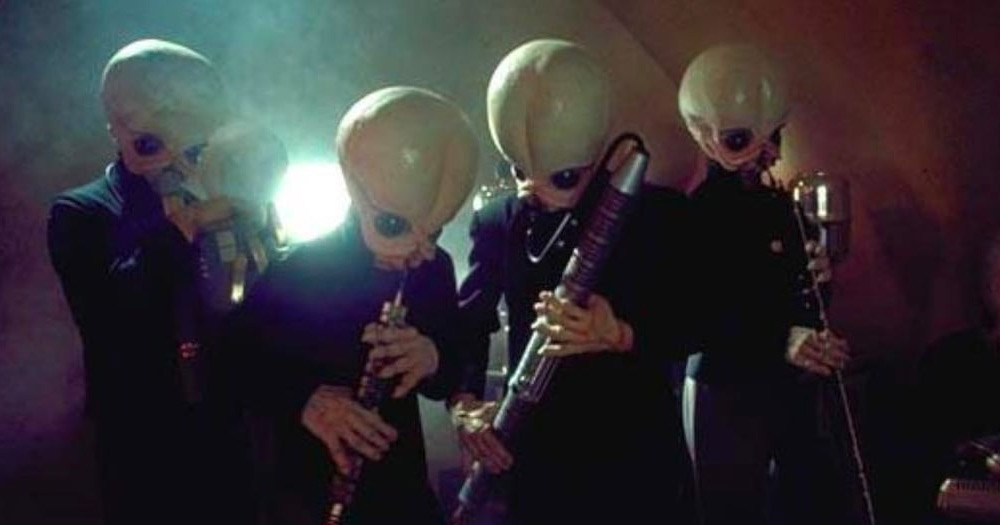 The Cantina Band absolutely counts as an onscreen band, and absolutely nails it. A few years ago, Spotify released data showing that John Williams’ Cantina Band song is Australia’s favorite sex jam, appearing on more playlists with the word ‘sex’ in the title than any other song. It beat out (hey now) jams like Ginuwine’s Pony, Kings of Leon’s Sex On Fire, and The Weeknd’s Often. It’s weird, but we get it. Kinda. 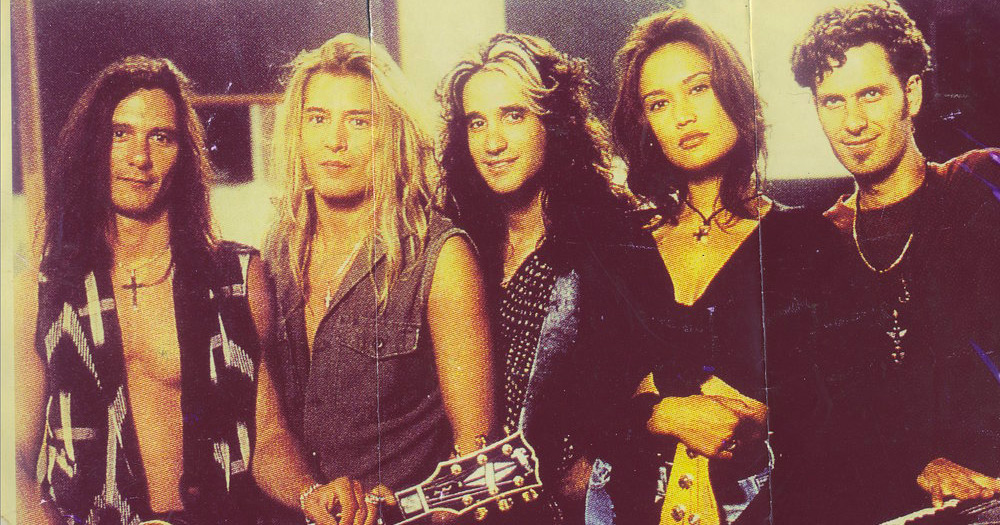 Tia Carrere as Cassandra, frontwoman of Crucial Taunt, is the ultimate rock chick heartbreaker. Carrere looks pretty at home behind the bass in the film, but was still a beginner, having to master her songs for the film in just three weeks. “I was dreadful, but at least my fingers moved in the right way. I never played bass again. I had much respect for Sting after that.”

Despite never picking up the bass again, Carrere has made a decent name in the music world in her own right, having won more Grammy Awards than fellow WW alumni  Alice Cooper and Queen put together. 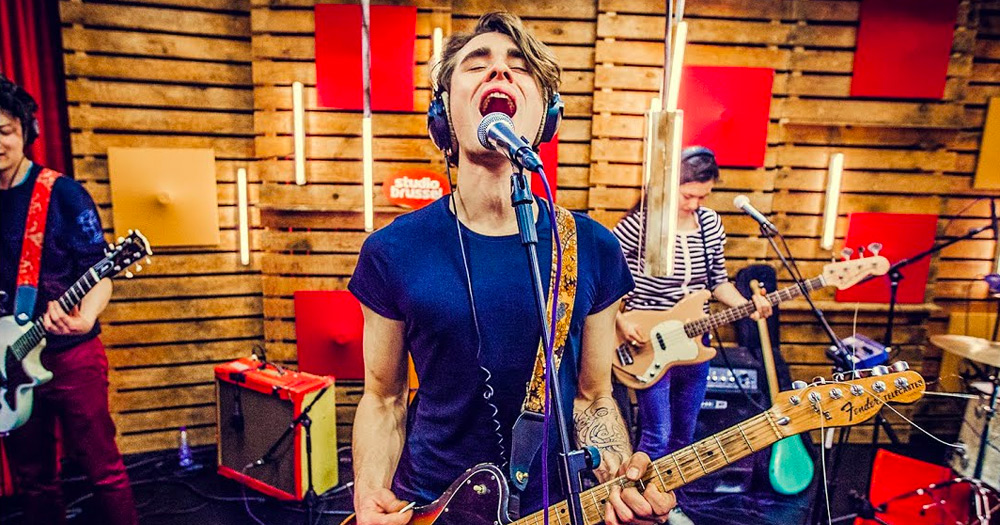 The Shitz are just one of 16 fictional bands created by Soulwax for the 2016 film Belgica. The soundtrack had the Dewaele brothers writing a diverse range of music for the fictional bands, from synth-pop and psychobilly to hardcore punk and Turkish acid house. Soulwax consulted friends in the Ghent music scene to make sure their versions of different genres sounded right. It fooled some, with one interviewer asking Soulwax how they managed to discover so many exciting new bands. The Shitz loved the Dewaele’s brothers’ songwriting so much they asked them to write more songs for them after the film wrapped. 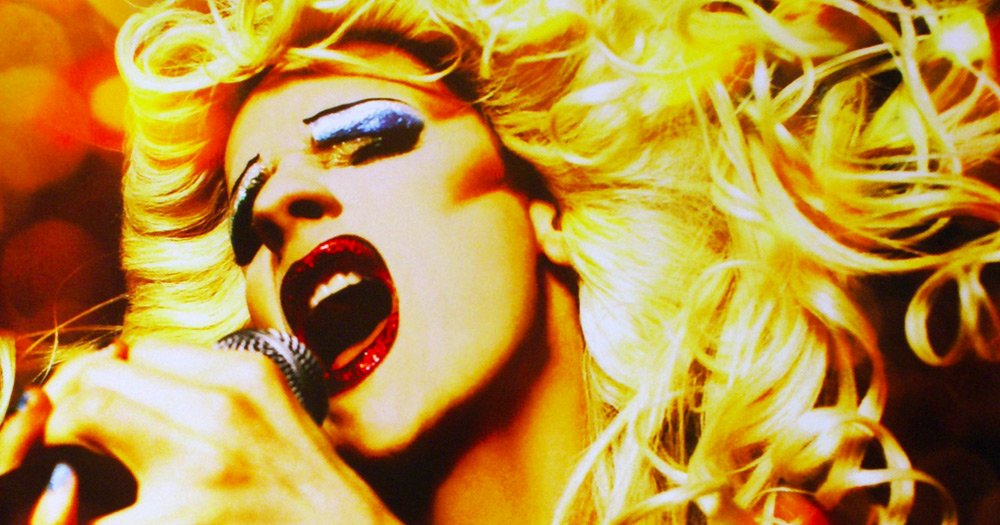 Before it was a film, it was an off-Broadway musical, so this fictional band has undergone several iterations. The eponymous Hedwig, a transgender East German rock singer, becomes a mentor and musical collaborator to a dude who ends up stealing her music and ditching her. The film soundtrack was recorded by the cast, as well as Husker Du’s Bob Mould and members of D.C. post-hardcore band Girls Against Boys. Songs from the film have been covered several times, by artists as diverse as Yoko Ono, Cyndi Lauper, Meat Loaf, Spoon, and Type O Negative. 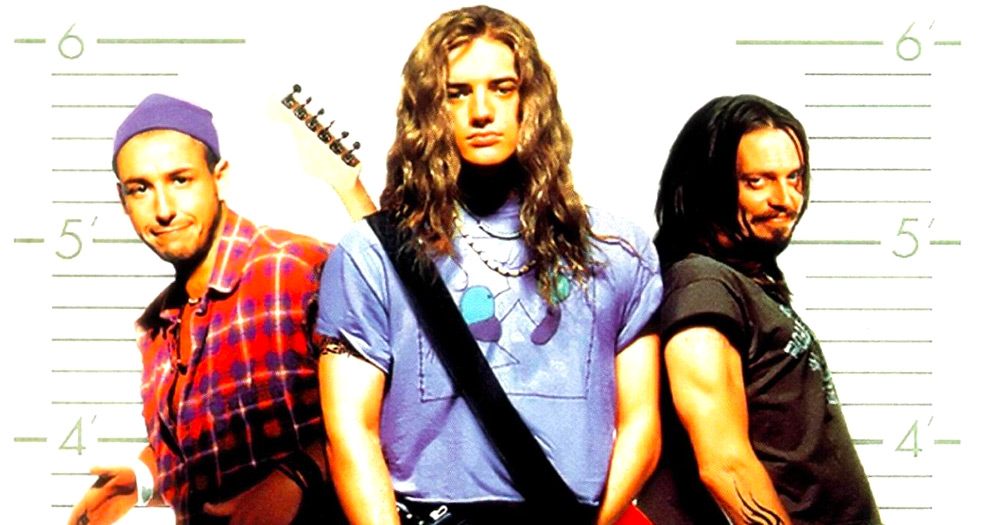 Even though in the movie The Lone Rangers had to hijack a radio station to get their demo Degenerated some airplay, it rips harder than most demos. That could be because it was originally by hardcore punks Reagan Youth. The version recorded for the film features Brendan Fraser on vocals, backed by White Zombie members Jay Yuenger and Sean Yseult. And their stunt scores them a pretty sweet prison gig.