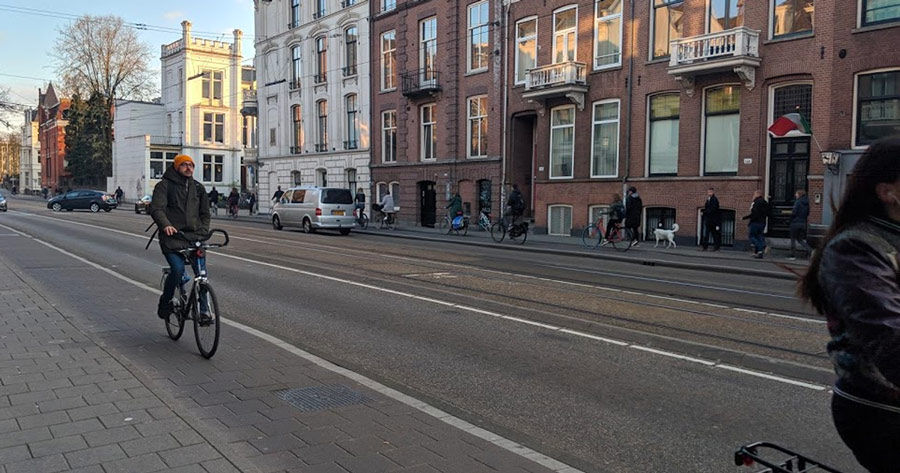 We replaced Fox’s coffee with Folgers Crystals on a recent trip to Europe. Let’s see if they noticed. The following is an account to some varying degree of accuracy. The views expressed in this publication do not necessarily reflect the views of the Discogs or its related entities.

I woke up on the floor in the space between two worlds, confused, disoriented, and emerging from between the two twin beds pushed together to resemble a king size. Is it dark? No time, no time zones, only my sparsely defined conceptual continuity in a place entirely too familiar: used vinyl record commerce.

Head throbbing with familiar regret, I assess the damage. The phone is dead, my laptop is dead, my pants are somewhere. Get those charging, fine. Eye over the half crate of black crack leaning against the wall and realize all too well with panging anxiety that I’ve only begun to torch my bank account. My association is no longer pure joy. Corrupted with having to make ends meet, now seeing imperfections of resale profit percentages, proper price per grade and pressing, the realities of sample-based music and crate digging altogether in 2019. There used to be unbridled ecstasy of discovery here. Am I still capable of being that which I thought I was at some point, or was that a me I had only dreamed of becoming?

Before I can answer, I’m already dressed and navigating my way to the train station, having been run over by bicyclists approximately 38 times per second. Amsterdam is a city. They like mayo on fries, but they have strict rules about mayo, so there’s fake mayo they call fritessaus. McDonald’s has their own variant, which basically has mustard mixed into it. It’s apparently known as fritessaus American, despite it not being served here at all. I think they’re poking fun at us. Yesterday was the dealer setup day. I spent too much money, but the numbers were lower than I see back home, so I must have spent less, right? What are conversion rates anyway? Or time zones for that matter?

I was sending out messages to friends without care or concern for local time of day. No chill. No time zones. No time. The convention hall where they hold the fair is massive and easy to get lost in. Records were only about half the dealers there, with the rest mainly comprising antiques, some belonging to eras less relatable than others. The temptation to buy Vaseline glass or a gosh darn crossbow were strong, but I knew I was going to have enough of a fun time getting back into the country as it was.

Saturday was the first official day of the fair. Still far too jet-lagged to function socially, I managed to interact with a few of you and may make policy changes based off the hypnotic state of my weakened mental state. Congratulations, those of you who talked to or — at me — during those waking hours. There’s something about being in a giant room with manufactured lighting for days on end. A loud mix of people and the occasional sub bass of distant music or locally-sourced piercing high end, resulting in occasional sloppy Ella Fitzgerald deep techno. Record super jail waged on seemingly endlessly, finds dropping off as the chafing on my rear increased from walking the seemingly endless floors in search of something other than ring-burnt Boney M LPs and €500 Vertigo swirls. 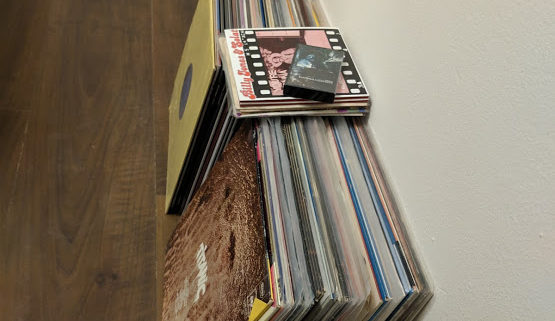 By Sunday, there was no humanity left, completely fried out by the cacophony of haggling and Eurovision hits. I hissed and spit acid at anything less than stone mint. Language and music had lost all meaning in this place, and the universe began to collapse. Prices reduced and again I desperately tried to throw as much of my life savings away as quickly as possible. The curtain drops and the cast bows, another successful mission. I visited the office and coworkers and even crashed at a friend’s crib one night after hanging out all day and talking about records. Now to get it all back home in one piece.

There are a few key things about packing to bring as much vinyl back home as possible. I fit this entire load in two carry-ons with a week of clothes, a laptop, and other essentials. First, pack as lightly as possible going there. Bring cheap/thrifted clothes, in case you need to abandon something. Wear a music related t-shirt to the airport — and most importantly, be nice to airport employees. There’s a pretty good chance you’re going to meet some when you get pulled aside for bag inspection if you’re carrying a lot of records. I try and watch the x-ray op’s face to see if they start squinting about when my bag comes through. If they do, I reply, “Records!” That’s passed me through a few times.

When packing for the trip back, start with your pants, fold them in half, and then in half again the long way. Put that on the bottom. Take a shirt and fold it in half, then roll it up into a burrito-like thing. Repeat with the rest of your shirts and put them aside for a moment. Make a stack of records in the center of the roller bag, rotating each record. As spines as slightly thicker than openings, this will compact them down a little more evenly. Take your T-shirts from earlier and pack them around the stack of LPs to cushion it on all sides. Pack socks and other smaller garments around it and on top and to fill in the gaps. Zip up. 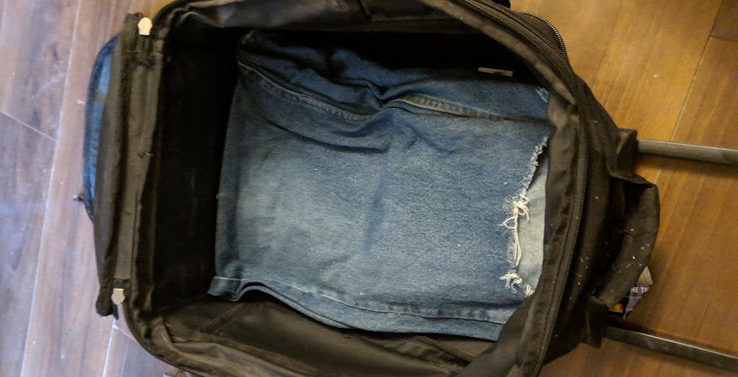 Repeat rotated LPs with the backpack until you’ve hopefully fit them all. If not, check to see if you have a free checked bag or if it’s possible to ship them back home. Try your best to plan ahead and buy only what you can bring back. If you’re planning on checking a box of records, remember to bring the box and packing tape in case you can’t easily source that at the packing location. Seven inches, CDs, and ephemera can usually be placed on top of the LPs inside the backpack. Don’t pack it out too deep, as this one needs to fit under the seat in front of you — and it might be a long flight back with really cramped space. Pack your charger cables and what not around the edges on top as well. Know your customs policies. In the US, you’re allowed to take back $800 worth without paying additional taxes.

This time, I did pretty okay getting back. My back still hurts from the weight. One of the security agents that opened my bags was super cheery, and I was as bubbly as possible. The second was not too pleased and suggested I switch to CDs next time. I was selected apparently for additional screening before I even got into security per my ticket for whatever reason. Probably assuming my acquisition of German psychedelic music and Italo disco might be worth checking into. Never a dull moment. Until next time, look what I bought!