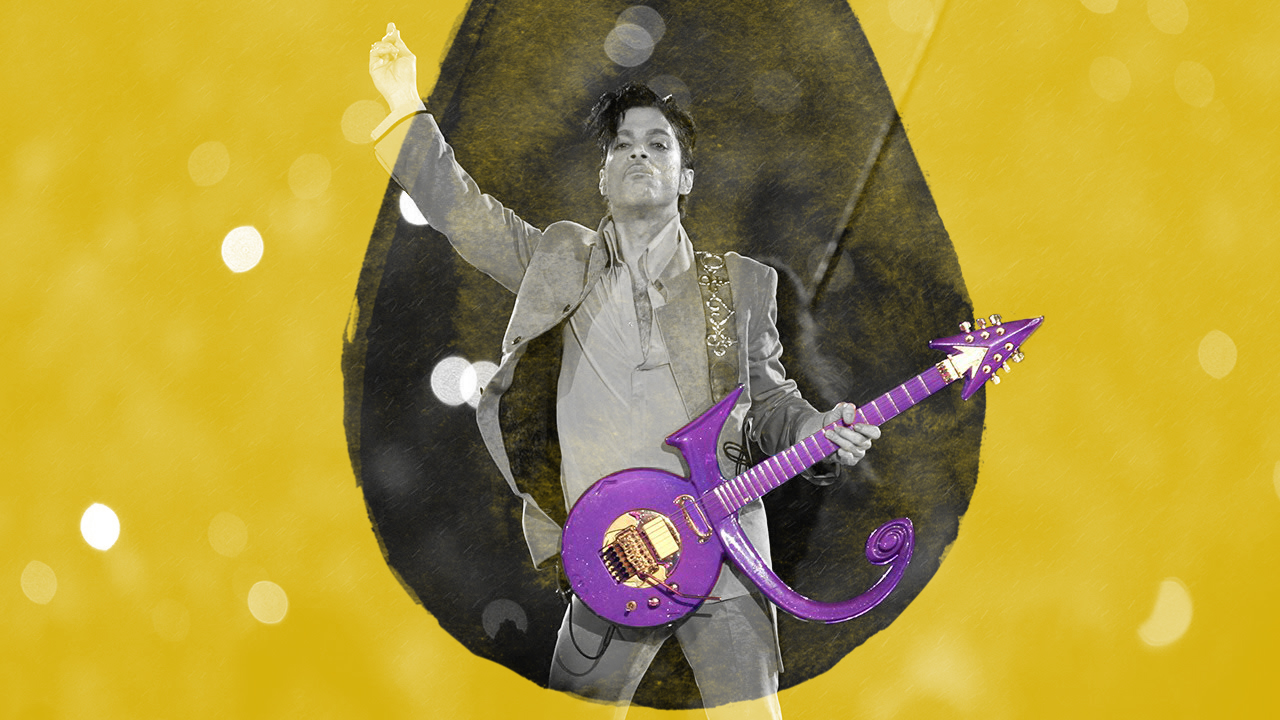 There are so many difficult things to cope with in the four years since Prince passed away, but none may be as difficult as knowing that no one will get to enjoy him in concert again. The music legend made a lot of magic in his career, but there was nothing quite like his performances: always superb, often unexpected (sometimes literally; as early as 1986, he was announcing surprise shows), and fully stretching the boundaries of what you’d expect a bandleader with a guitar could do.

In May, The Prince Estate will team up with Legacy Recordings to release Up All Nite with Prince: The One Nite Alone Collection, a new box set offering the rare studio album One Nite Alone…, the contents of the long-out-of-print One Nite Alone…Live! box (Prince’s first official full-length live release) and the Live At The Aladdin Las Vegas DVD, all recorded throughout 2002. In shining the spotlight on The Artist as a conqueror of concert venues, we’ve assembled this must-watch playlist for your own Prince live experience. (And if that’s not enough, dive into THIS live audio selection of Prince’s best work onstage.)

Prince finally enjoyed sustained crossover success with his fifth album 1999, which spun off hits in “Little Red Corvette,” “Delirious” and the title track through 1983. But the double-album didn’t take off until months after its release—so it’s interesting to see this multi-camera set, unearthed for last year’s deluxe box set edition of the album. Recorded before “Corvette” revved its way up the pop charts, this show nonetheless has all the charm faithful fans knew Prince was delivering night after night. This extended take on “1999,” the penultimate song in the set, got the crowd on its feet, and it’ll likely do the same to you nearly 40 years later.

Recording Academy president Mike Melvoin can barely keep his excitement in check as he introduces Prince and The Revolution, and it’s not hard to understand why: not only is his daughter Wendy a cornerstone of the group, but it’s the arguable cap on the world-conquering year of Purple Rain, which gave Prince the top album, single and film in the country. Here, a newly expanded line-up of The Revolution (including percussionist Sheila E.) charge through “Baby I’m a Star” and keep topping themselves. The half-tempo breakdown! The James Brown-worthy splits! The dance break with Jerome Benton of The Time! Eventually, the funk can barely be contained by the stage, and ever the badass, Prince leaves before curtain call (or commercial break), fully undefeated.

After the juggernaut of Purple Rain, Prince’s next moves were typically unpredictable: his surprise follow-up, 1985’s Around The World In A Day, experimented with ‘60s psychedelia. His next film project, Under The Cherry Moon, was a black-and-white period piece that Prince ultimately directed himself. (It didn’t match the success of Purple Rain, despite the soundtrack album featuring the smash hit “Kiss.”) On a break from filming in France, Prince decided to fly The Revolution out and book a free one-off show for 2,000 lucky fans; their opening performance of “America,” Around The World In A Day’s third single, was delivered to MTV for airplay.

Fans lucky enough to see the stellar concert film released to promote Sign “O” The Times know what a delight Prince’s new band was like. With almost every core member of The Revolution gone (save keyboardist Matt “Doctor” Fink), Prince assembled a new team to achieve a tough task: capture the spirit and ambition of a double album he’d crafted almost entirely on his own. Luckily, Prince was on hand to offer the Sign “O” The Times experience six months after the album’s release as a performer at MTV’s Video Music Awards, delivering some killer guitar lines over the album’s opening tracks as singer/dancer Cat Glover gyrated and Sheila E. led a drumline on stage.

For an album largely comprised of a decade’s worth of outtakes, built to soundtrack a Purple Rain sequel that bombed at the box office, there’s actually a lot to enjoy about Graffiti Bridge. In this clip, taken from the Nude Tour—a greatest-hits revue that trekked to Europe and Asia before the album or film was released—Prince showcases one of the project’s highlights, the simmering “The Question Of U.” For those who love Prince’s talents as a multi-instrumentalist, this clip features him effortlessly switching between piano and guitar on the track.

After critics rubbed Graffiti Bridge, Prince was ready to shake things up for a new decade. On his 33rd birthday, he surprise released “Gett Off,” a thumping club jam that introduced his new band, The New Power Generation. It sounded like Sly Stone discovering New Jack swing, and fans were into it—so when it came time to promote the album Diamonds and Pearls later that year, Prince and The NPG made a huge splash at MTV’s VMAs that year. The stage design was ornate and the sexy back-up dancers were plenty, but heads really turned midway through the song, when Prince turned around to show that his lacy yellow outfit didn’t have a backside—only the one God gave him.

If you have a popular song called “1999” and are still recording popular music in 1999, it stands to reason that the year would be big for you. Indeed, Prince issued the high-profile Rave Un2 The Joy Fantastic (the last credited to the unpronounceable symbol he’d gone by since 1993) and closed the year with a pay-per-view special called Rave Un2 The Year 2000. Recorded at his Paisley Park recording complex in the suburbs of Minneapolis, Rave featured guest appearances by Lenny Kravitz, Morris Day and The Time, Sly & The Family Stone bassist Larry Graham and George Clinton, plus what Prince touted as his “retirement” of “1999.” Another highlight of the show: this performance of beloved B-side “She’s Always In My Hair.”

The Live At The Aladdin Las Vegas DVD is as idiosyncratic and unpredictable as Prince himself: spontaneous camera angles, audio that was mixed live, and a setlist that focuses primarily on deep cuts like “Housequake” and “Pop Life” or covers like James Brown’s “Pass The Peas” and Led Zeppelin’s “Whole Lotta Love.” But hearing Prince dig deep and shine the spotlight on tracks from his massive discography is hard to grouse about, as this killer, horn-infused take on Sign “O” The Times album cut “Strange Relationship” shows.

Prince balked at the narrative that 2004 marked a comeback for him—indeed, he hadn’t really taken a year off in terms of touring or releasing—but the run-up to Musicology was particularly high-profile. In the first months of the year, he’d opened the Grammy Awards alongside Beyoncé, and graciously attended his own induction to the Rock and Roll Hall of Fame. When it came to the ceremony’s closing number—a cover of The Beatles’ “While My Guitar Gently Weeps” in honor of fellow solo inductee, the late George Harrison—Prince had some unbelievable magic in his back pocket.

Alongside Tom Petty, Jeff Lynne (both bandmates with Harrison in the Traveling Wilburys), Steve Winwood and George’s son Dhani, Prince’s face-melting, barely rehearsed closing solo is three minutes of rock and roll bliss that almost makes you forget that Eric Clapton played on the original track. There’s a reason (or several) that tens of millions of people have viewed this performance on YouTube, from Dhani’s joyous reaction to Prince bending backward over the stage (held up by a stagehand!) to the infamous finale, when Prince throws his axe into the air and it seemingly never lands.

The Rock and Roll Hall of Fame performance alone would’ve sealed 2004 as a killer year for Prince, but he wasn’t done: Musicology became a Top 5 album thanks to an unprecedented (but now industry standard) move that gave a copy to every attendee of his massive arena tour. And in the lead-up to the tour, Prince partnered with MTV for an intimate gig at Manhattan’s Webster Hall. The unquestionable highlight is when Prince sits on a stool armed with only a purple acoustic guitar: his delivery of 1991’s chart-topping “Cream” is a sustained high, down to the playful teasing of the audience as they attempt to back him up.

Medleys on awards shows are usually the purview of elder statesmen with little to prove—but again, you’d be a fool to apply such simple labels to someone like Prince. A month before he dropped 3121 (his first album to debut at the top of the Billboard 200), he closed England’s biggest music awards ceremony with a performance that featured two tracks from the upcoming album—the sensual acoustic number “Te Amo Corazon” and the guitar barnburner “Fury”—plus two of Purple Rain’s biggest hits: the anthemic title track and the immortal “Let’s Go Crazy.”

What made this performance special was who he chose to back him up: his longtime percussionist and collaborator Sheila E., plus for the first time since the breakup of The Revolution, guitarist Wendy Melvoin and keyboardist Lisa Coleman joined him onstage. This subtle but moving reunion continued a year later when the duo contributed to tracks on Prince’s Planet Earth.

Thousands of words have been written on Prince’s iconic performance at the Super Bowl XLI halftime show, to the point where it seems unnecessary to relitigate the story. But 100 years from now, when it’s discussed how a performer braved a freak rainstorm at the country’s biggest sporting event and gave a truly transcendent performance that featured several exciting covers and a signature song that matched perfectly with the weather conditions, one can only hope everyone will know they’re talking about Prince without having to look it up.

In Partnership With Sony Legacy