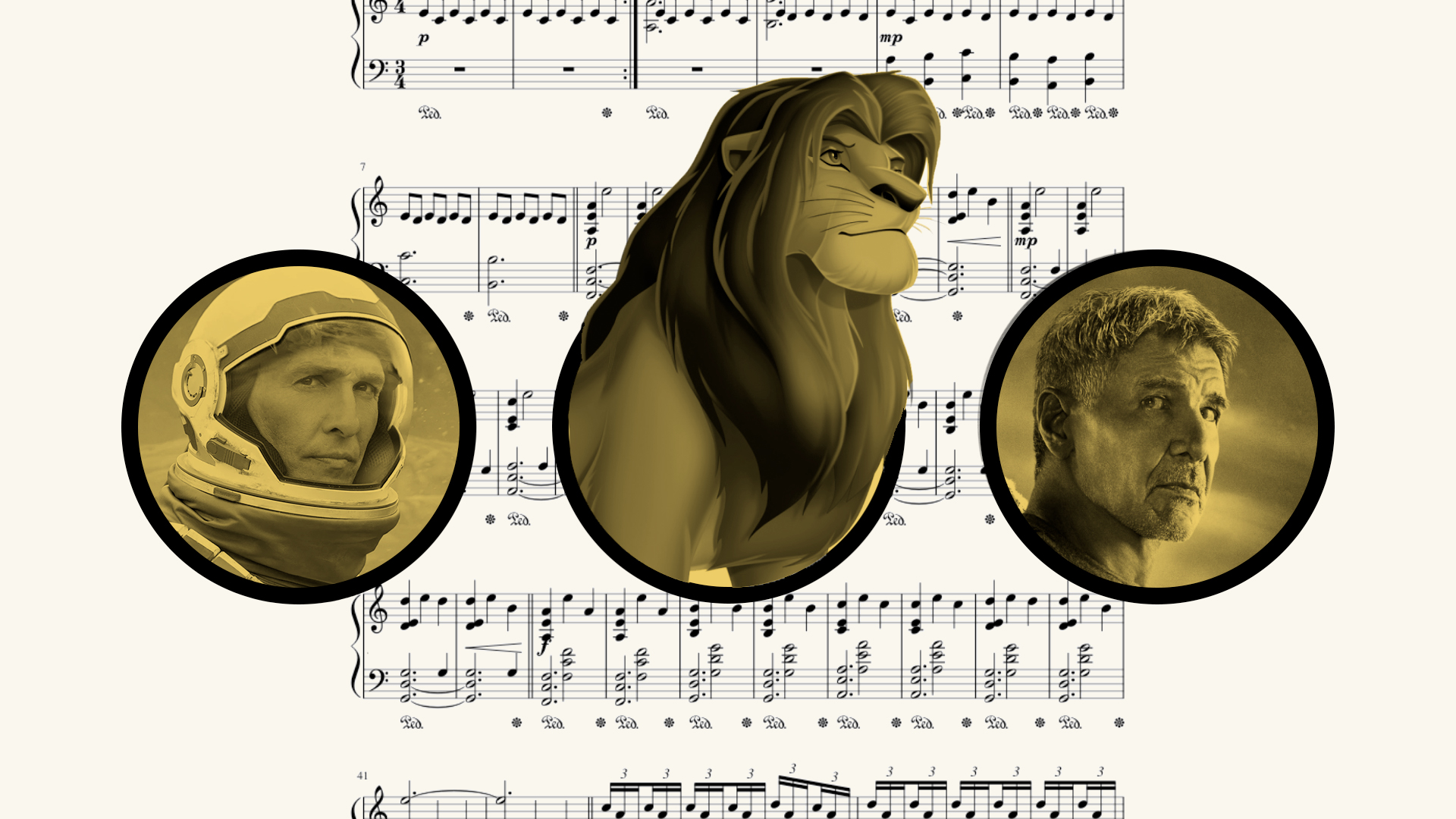 Has there ever been a rock star of the film score world like Hans Zimmer? The German composer and producer crafted some of the most beloved soundtracks in Hollywood history. He’s got four Grammys, an Oscar (and 10 other nominations), a Stephen Hawking Medal, and a lifetime achievement award from the National Board of Review. Even more rockstar-esque, he headlined Coachella 2017, which might seem weird for a film composer, but when you take a look at his whole career, it makes a lot of sense.

This man is anything but one-note. Before he scored blockbusters, Zimmer collaborated with bands including The Buggles (he makes a cameo in the “Video Killed The Radio Star” music vid), The Damned, and others. In later years, he kept that studio spirit alive, working alongside metal bands, hip-hop icons, electronic legends, and Mariah Carey.

Of course, it’s the film scores that made him famous. Whether he rocked cheesy ’80s synth sounds or made us cry with angelic strings, Zimmer has been the soundtrack to so many must-sees. His work on The Dark Knight was an instant classic, as were his standout pieces for Pirates of the Caribbean. We were indeed entertained by Gladiator, had our sense of reality ripped and torn by Inception, and learned the true meaning of friendship with Thelma & Louise. Also, just gotta shout out Cool Runnings – but none of those pieces cracked the top 10 of Zimmer’s most-collected works by Discog users.

What have you deemed the cream of the crop instead? We gathered the data, and the results are surprising. The following list, like our monthly most-popular roundups, is determined by how many people have added the item to their Collections on Discogs.

The year was 1990 and Tom Cruise had just received his first Best Actor Oscar nomination for his portrayal of a paralyzed Vietnam veteran in Oliver Stone’s Born on the Fourth of July. We weren’t that far out of the ’80s, so of course, it made sense to follow that emotional performance with a starring role in a NASCAR action flick. Days of Thunder pits hair-raising race scenes against era-appropriate scores. Zimmer did not steer away from cheesy wah-wah synths and pounding drum echoes. YThe romantically-tortured rain drop electronics and brooding cinematic build of mechanical montage track “Car Building” on the B-side of this 7-inch comes in tight to clear the top 10 with 1,748 fans. That may have more to do with the radio-friendly A-side “Show Me Heaven.” Maria McKee’s power ballad that charted in 15 countries, but Zimmer’s epic crescendo deserves some shine.

Mr. “Happy” of the Neptunes set isn’t like other producers. Pharrell Williams has been a man behind the hits since the early ’90s. Did you know he wrote Riley’s verse on Wreckx-N-Effect’s 1992 hit “Rump Shaker?” He followed that little-known fact with a string of classics, working with Jay-Z, Snoop Dogg and Britney Spears, just to name a few. By 2014, he’d ascended to the kind of mononymous status reserved for household icons, but when it came to introduce his sophomore solo LP, he sought the help of a different legend. G I R L opens with a rush of strings, the spring-time sound melting into a sweet and sentimental melody that Pharrell soon funks up with a cocky pop beat. It’s the kind of genre-fluid professionalism that only Han Zimmer could arrange, and his strings play a big role in the Daft Punk-assisted track “Gust of Wind,” too. This pop-crossover gets a lot of love from collectors (1,762 of you, to be exact), and it’s the perfect Sunday disco for an easy groove.

Two years before Days of Thunder, Zimmer scored another little Cruise favorite. You may have heard of Rain Man. It was the highest-grossing film of its year, and it won four Oscars. Coming quite early in his career, the score is now seen as Zimmer’s big Hollywood break. The two tracks heard on this soundtrack release, “Leaving Wallbrook/On The Road” and “Las Vegas/End Credits,” are distinctive for their mix of electronics and organics. Bouncing synths and metallic textures shine amidst wooden flutes, steel drum pings, soulful choruses and twanging guitar. It was all part of the plan.

“It was a road movie, and road movies usually have jangly guitars or a bunch of strings,” Zimmer said in an interview with Entertainment Weekly. “The Raymond character doesn’t actually know where he is. The world is so different to him. He might as well be on Mars. So, why don’t we just invent our own world music for a world that doesn’t really exist?” His visionary work was rewarded, and his career is littered with thoughtful approaches. This early gem is a favorite with 1,929 music lovers adding it their worldly shelves.

Who among us does not remember sitting on a couch watching MTV’s TRL all slack-jawed, shoving corn chips in your mouth, while original red-cap anti-hero Fred Durst played secret agent in the “Take A Look Around” music video? If you missed that cultural high point, you may not be one of the 1,930 collectors of the official M:I-2 soundtrack CD. Truly a tome of its time, the tracklist includes gun-metal sounds by Metallica, Rob Zombie, Godsmack, Foo Fighters, Butthole Surfers, Uncle Kracker and more. Nestled among the nu-metal are glimpses of the third and certainly most action-packed Cruise-Zimmer team up on our list. There’s the flamenco-rooted romance of “Nyah,” which makes magic between Brazilian composer Heitor Pereira and Zimmer’s theatrical mastery. “Nyah” brings electric guitar edge, but it’s the collab Buckcherry that really takes the cake as Zimmer’s rock pinnacle – that is, until we get further down this list.

Enough with the cross-genre hybrids and various artist compilations. We want to hear some real pungent scoring. Bring us moody chords and searing strings that we can set pictures to in our minds. In this case, “we” is 2,219 Discog collectors, and what you want is a neon dystopia, sci-fi thriller that sounds classic and yet all-together otherworldly. When conjuring the future sounds of the Blade Runner sequel, Zimmer and project partner Benjamin Wallfisch realized how important it was to honor what composer Vangelis had done for the original.

“I realized that Denis [Villeneuve] is a director who has a vision; he has a voice,” Zimmer told Epic Records. “Remember, I’ve done a lot of movies with Ridley Scott. So, it was important that this was an autonomous piece of work. Let’s just be honest. Ridley is a hard act to follow — as is Vangelis. While Ben [Wallfisch] was 4 years old, I had actually experienced all of this. We watched and literally, as we stopped watching, we decided on the palette. We decided this wasn’t going to be an orchestral thing. The story spoke to us.”

The result is a subtle, heavy, looming atmosphere. It hangs and twirls in the air like mists or smoke. The pair relied heavily on the Yamaha CS-80 synthesizer, as Vangelis had done. They also reprise his climactic moment in “Tears in the Rain,” an iconic scene for any generation.

Before Jay-Z had “99 Problems” and before Metallica’s self-titled album, English goth-punkers The Damned made The Black Album a hit. It’s a turning point for the band’s sound, expanding both artistically and in sheer size of output. The massive 18-track release is laid out across two albums and four sides. “Curtain Call” at track 12 takes up a whole side at a whopping 17 minutes and 15 seconds, moving through motifs and movements of the highest conceptual order. It’s truly the dramaturgic peak of the album, but Hans Zimmer’s synth production on nihilistic jam “The History of the World, Pt. 1” is a career-defining example of the film composer’s adaptability. Working alongside these pounding drums and vibrant riffs, Zimmer alludes to the broad taste we’ll hear in Days of Thunder, M:I-2, and other soundtracks to come. Join the 2,608 collectors who bought this record for The Damned’s gutter grandiosity and stayed for the nascent Zimmer scene setting.

Two legends walk into a studio. This isn’t a set-up for a joke, but rather the concept behind Jean-Michelle Jarre’s Electronica series of albums which pits the French electronic music pioneer with well-respected icons of the scene new and old. For the second edition, Jarre nabbed collabs with fabulous hit-makers including Pet Shop Boys, Gary Numan, Peaches, and Cindy Lauper. He also got Zimmer to relive his studio-album roots. “Electrees” is a sweeping, pulsing bit of electronic mastery that would fit into any computer sci-fi epic. It’s truly Tron-like, the perfect set up for the thumping tension of follow-up tune “Exit,” which features NSA whistleblower Edward Snowden. Real life drama adds extra emphasis to this fan-favorite LP, and 2,682 of you are here for it.

The mere mention of this soundtrack is enough to make a millennial cry. Big ups to Beyonce for recreating what no one else could, but 3,188 Discogs collectors are proud to own the original — well, the picture-disc reissue of the original. It’s packed with memorable sing alongs and childhood nostalgia, but Zimmer’s moving instrumentals are the emotional push that put us right back into each eye-watering moment.

Disney contacted the composer after hearing his work on 1992 film The Power of One. He’d traveled to Africa for the job. Unfortunately, the South African government labeled him a “subversive” movie criminal after the fact, so Zimmer could not repeat the on-location feat for Disney. No matter. The Lion King was Zimmer’s first score for an animated movie, and it also nabbed him his first Oscar for Best Original Score. He also earned a Golden Globe and two Grammys for it. Not bad for a piece of work that could have had him arrested.

Four years after soundtracking ’90s kid childhoods, Zimmer created what many consider to be one of his most important scores for Thin Red Line. The war film’s director, Terrence Malick, wanted the music before filming began, so Zimmer delivered six-and-a-half hours of heart-panging, blood-rushing genius. About two-minutes of that became the track “God Yu Tekem Laef Blong Mi,” a song composed mostly of chorus singers from the small Oceanic island Melanesia backed by powerful and heavenly horns. About 20 seconds of that made it into Vampire Weekend’s “Hold You Now,” the opening track to the band’s fourth studio album that 3,395 of you just had to have on vinyl. It would have been real cool if Vampire Weekend got Zimmer in the studio to recreate the singing, but knowing how much Zimmer likes working with rock stars, it’s not wild to imagine it could happen on day.

Rock star collabs and famous samples aside, it’s only right that the most collected work by the modern era’s favorite composer is a work of pure cinematic achievement. Interstellar was a monumental mind-bender and a monster of a hit. It set a worldwide record for IMAX openings with $20.5 million the first weekend alone. It won the Oscar for Best Visual Effects, and while Zimmer didn’t win for Best Score, he was nominated. That doesn’t stop 4,019 music fans from making it the most-collected Han Zimmer release in all of Discogs fandom. It also does nothing to diminish the evocative atmospheres of this hour and a half. From its mysterious, starry-eyed opening to its haunting spoken-word close, the Interstellar soundtrack is perfect for pensive moods and contemplative eves. It’s also a little spooky, if you’re looking for new Halloween background noise. Either way, it’s the crowned favorite. There’s an expanded version of the soundtrack available in November, so maybe we’ll see that edition make the most-collected list in the future.