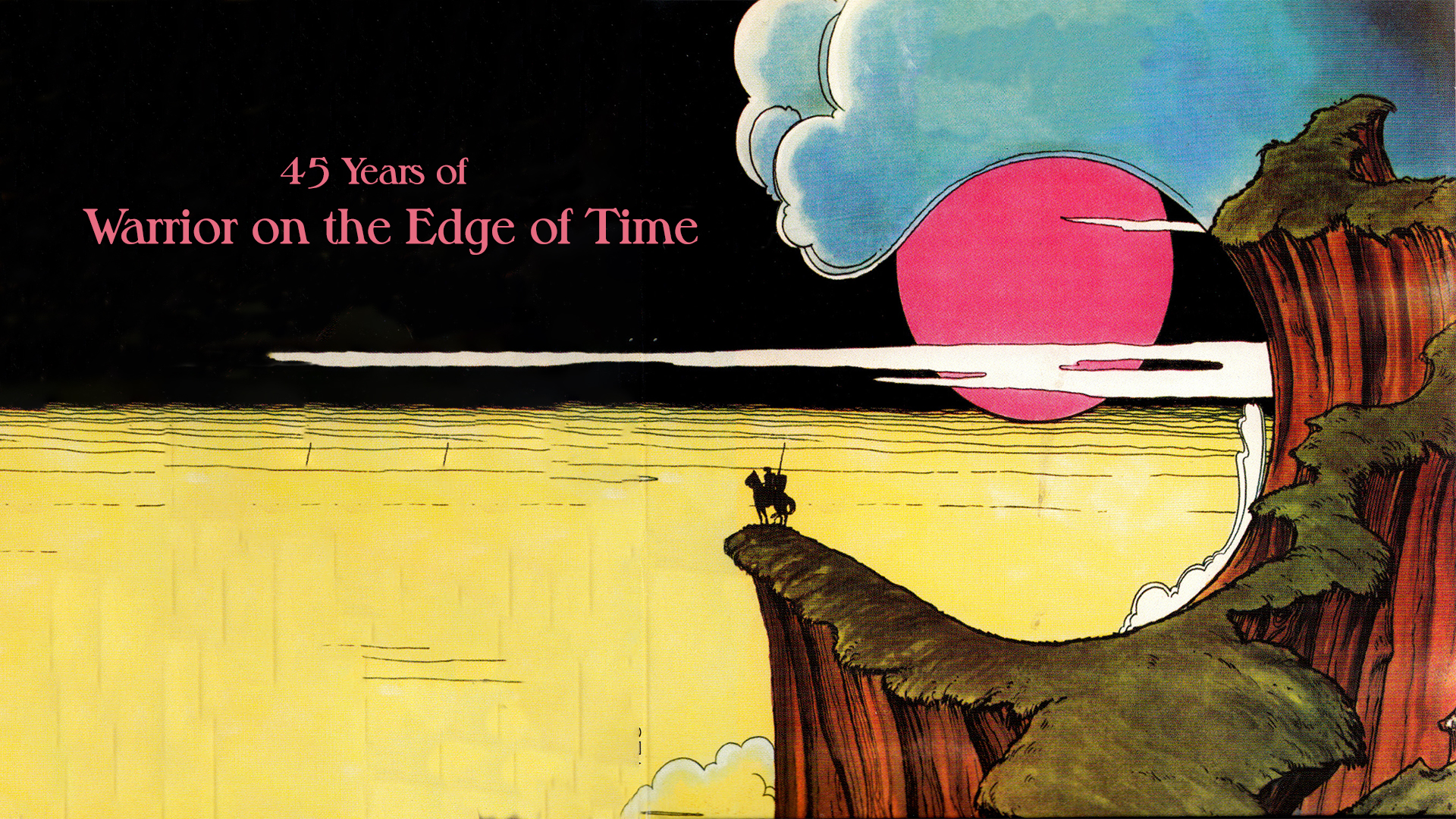 Before Joy Division and The Normal took inspiration from J.G. Ballard cyber-punk science fiction, Hawkwind were collaborating with one of the writing genres creators, David Brock. During their 1974 shows, the band incorporated several of the authors poems into their live sets, the only new material they played while on the road. A bunch of winter UK gigs saw Moorcock contribute a short story to the group’s tour programme, further strengthening the relationship. Once off the road, the group realized that they owed their record label United Artists one more album to fulfill their contract. They once again turned to Moorcock as a guide, formerly bringing him into the fold for their fifth studio album, Warrior On The Edge of Time. Moorcock’s book The Eternal Champion provided a framework for the release, as lyrics were pulled directly from the text to be used on tracks. The novel explores the ideas of law and chaos, themes which may have closely paralleled the very real personal struggles occurring within the group itself.

Brock was finding the fame and notoriety that came with being in a popular band difficult to handle. When not on the road, Brock lived a low-key existence on a 10-acre farm with his wife and two children in the rural county of Devon in England. The disparity between the gentile rituals of home with the ‘mammoth commercial machine’ of live performances and insatiable fans was starting to wear. Former bandmate Del Dettmar had already left the group, bowing under similar pressures experienced by Brock. The stresses had mounted though since Dettmar’s departure, with the band attaining an even higher level of success by the time recording of Warrior commenced. They had landed five UK top 20 charting albums, and were starting to break into the US market, with several records cracking the aspirational Billboard Top 200. However, such enviable success was grating on founding member Brock. He viewed sale viability as problematic and began despising the time away from home required to fulfill his band duties. In a 1975 Melody Maker interview, Brock confided that, ‘…as far as going to gigs…it’s getting to be like a job, man. And that’s really bad, when it gets to you like that, because you don’t feel it anymore.’ He also did not like the way shows had changed. Greater sales meant more people wanting to see them, making for larger venues being played before larger audiences. Brock did not like this aspect either, saying dismayingly, ‘A couple of years ago we could play at town halls and they would be about half full and people could bring their kids and it used to be excellent. You could move around without being crushed to death and have a really good time. That’s what I really miss. Now there’s always thousands of people, and it just gets too much.’

Relationships within the group were also starting to fray. While Brock wanted to devote more time to his farm in the countryside, some of his bandmates were embracing the lifestyle that stardom afforded. The looming fracture was especially evident between Brock and bass guitar / vocalist / amphetamine aficionado, Lemmy, who he claimed was on a ‘fantasy trip’ of wanting to be part of the ‘alternative lifestyle’ of the Hell’s Angels.

The polarity of inner band conflict was continued and almost reflected in the contrasting locations picked for recording. Much of the album was laid down at the idyllic and remote Rockfield Studios, situated near a small village in Wales during March of 1975. Three additional tracks had already been cut earlier in the year at outer London’s Olympic Studios over January 5th and 6th of the same year. All of these factors led to the finished product of Warrior being a hodgepodge of sounds, songs, and moods- though all strangely still fitting under the loose architecture provided by Champion, with several songs drawing from other iconic writers. Opening track ‘Assault and Battery (Part 1)’ kicks off with open, spacy, swishing keyboards combined with Lemmy’s churlish, grinding basslines before Nik Turner introduces a jazzy groove with his flute. Things get even more eclectic with the inclusion of poetry lines, taken from Longfellow’s haunting 1838 classic, ‘A Psalm of Life’: ‘Lives of great men all remind us / We may make our lives sublime / And departing leave behind us / Footprints in the sands of time.’ These opposing elements of meandering prog, philosophical ponderings, and aggressive heaviness provided by the future Motörhead are a defining moment, as they bridge the psychedelic, punk, and rock genres, with generous sprinklings of Krautrock apparent. 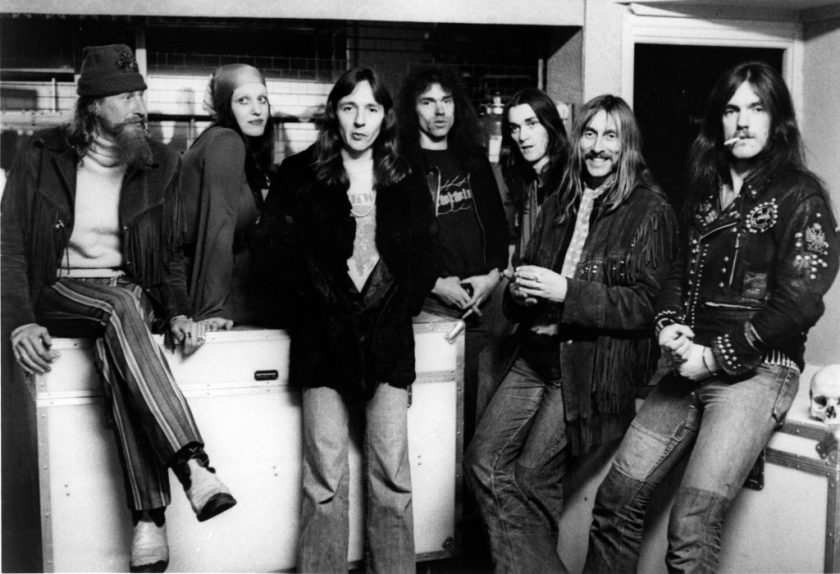 Other songs on the album are not as successful in amalgamating the clashing styles, and seem to be more the product of frustrated musicians, clashing ideas (and perhaps egos) along with the apparent overwhelming desire to finish the record instead of the desire to necessarily make a critical masterpiece. The chugging sax and high pitched vocals of ‘The Golden Void (Part 2)’ lack the exciting alchemy of the ‘Psalm.’ The spoken word dystopia of Moorcock’s ‘The Wizard Blew His Horn’ might be a perfect accompaniment to a night in and some sweet Mary Jane, and it works well as a connecting tissue between ‘Void’ and the instrumental jam fest, the five-plus minute long ‘Opa-Loka.’ Closing Side 1 track, ‘The Demented Man’ should be served with a side of acid and a ticket to Laurel Canyon, making for yet another jarring shift before the first part of the album is complete. Side 2 is equally schizophrenic, moving between light-hearted ditties to gritty, driving guitar fist shakers. Single ‘Kings of Speed’ is a pop sing-along, worthy of being an alternative theme jingle for The Banana Splits. This makes the cuts bombastic flip-side ‘Motorhead’ that much more of a (weird? surprising?) revelation. It was the final song that Lemmy wrote for the band, and it provides a sonic model of what is to come from the bass player.

Listening to Warrior now is a total ‘Ah Ha!’ moment: you can hear the clear lineage between this group and a wide, wide array of its descendants, from Rocket from the Crypt to (the more obvious) Brian Jonestown Massacre, all the way to, well, the opening hallucinatory tune of kids television show The Great Space Coaster. While the array of ideas presented across Warrior are at times chalk and cheese, they also have highlights of experimental bravery, blending literary, metaphysical, and sonic planes into an unexpected goulash, resplendent with incredible highs while simultaneously being splattered with some limp lows. I know some of my friends will rail at me, say it is a tragedy that I do not love this record from start to finish, and hold it up as a masterpiece. But for me, the greatest triumph of Warrior is that it is interesting- forty years on, it still surprises and inspires, which is in its own way a special kind of ingenuity.