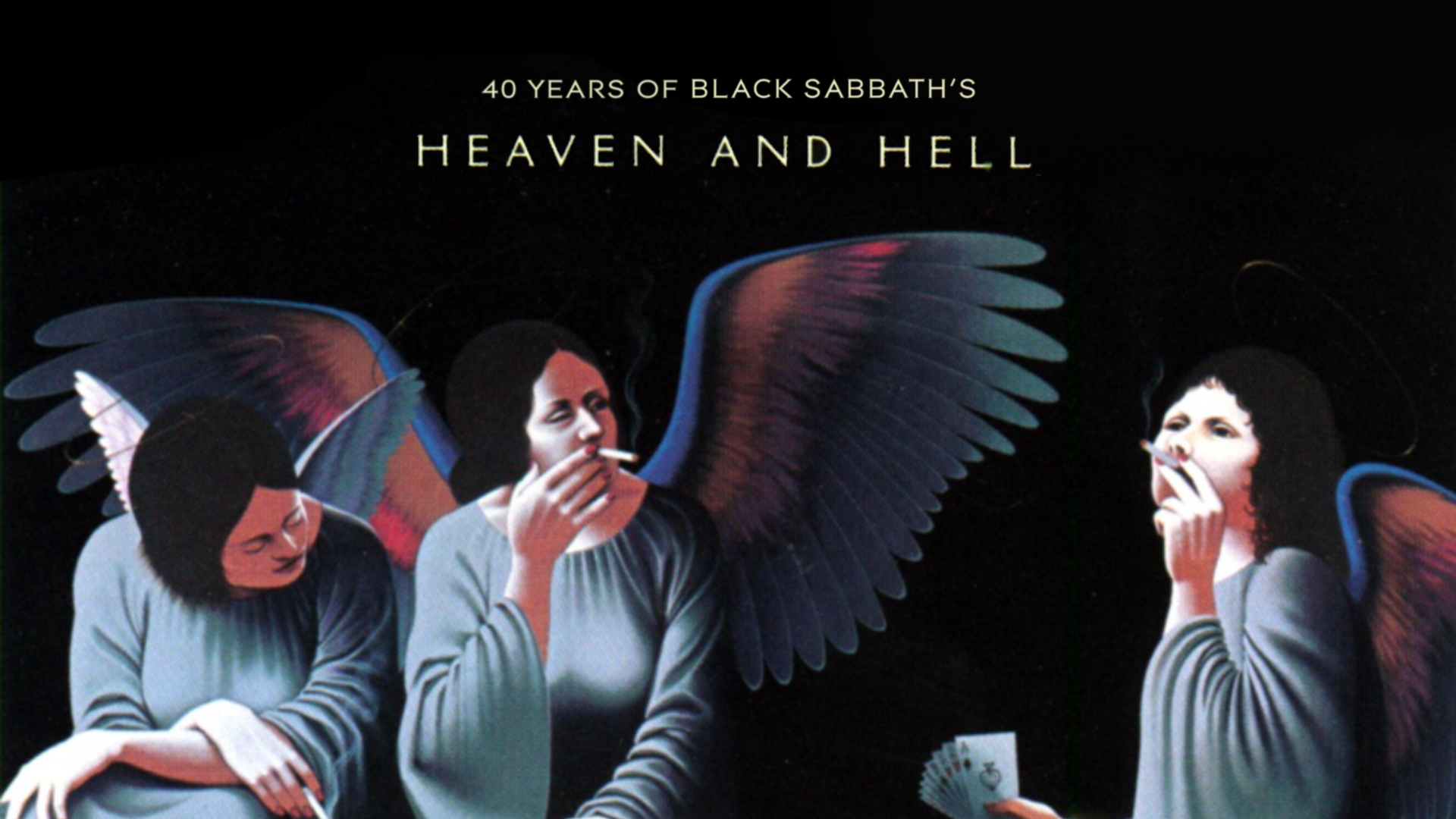 In 1979, Black Sabbath was in dire straits. The famed heavy metal pioneers from Birmingham, England had been struggling to make new music with their drug-addled frontman Ozzy Osbourne. After dismissing him from their ranks in April following a disappointing album (Never Say Die) and their 10th-anniversary tour, guitarist Tony Iommi, bassist/lyricist Geezer Butler, and drummer Bill Ward faced a crossroads. They had taken a perilous gamble but one they felt was necessary.

After a party introduction between Iommi and singer Ronnie James Dio was brokered by Sabbath manager Sharon Arden – yes, the future manager and wife of Osborne – the British guitarist and native New York singer met a few months later at the famed Rainbow Bar and Grill on the Sunset Strip in Los Angeles. Dio had just left a long-running stint with Rainbow, the British hard rock band that wanted to commercialize their sound and take a different direction. After the duo broke bread, they quickly conjured much of the song “Children of the Sea” at the band’s rented house with Butler in attendance. Yet while that initial collaboration seemed promising, the bassist, who also struggled with personal problems, decided to bow out.

Undeterred, Dio, who also played bass, continued to write and jam with Iommi and Ward. Additionally, ex-Quartz keyboardist (and bassist) Geoff Nichols joined the group at Iommi’s behest and would ultimately play keys for them on the album and in concert (offstage) between 1979 and 2004. The chemistry was palpable and yielded great results. Once Butler heard the music they were coming up with as well as Ronnie’s lyrics, he was back in the saddle with Sabbath. The group enlisted producer Martin Birch (Deep Purple, Rainbow, Iron Maiden) and between October 1979 and January 1980 recorded their now-famous metal opus Heaven And Hell. Anytime a group loses its famous frontman and replaces him with someone else, there are going to be some fans who will not get behind what is happening. Some fans did not stick around for this new incarnation of Sabbath. But many did and many new ones came on board to revel in the exciting new incarnation of this doomy, gothic quartet. This was not a clichéd, desperate “replacement singer” scenario – Dio more than proved himself at the outset.

“It opened up that space for me to play more and to come up with a different way of writing,” Iommi told me in 2008. “You write stuff with the singer in mind, and if there are certain things you play and they can’t sing it or it’s not good for them to sing, then obviously you don’t use it. But when Ronnie came in, [the music] went to different places that Ozzy wouldn’t go, which enables your writing to expand more.”

There were some very apparent differences between this version of Sabbath and the previous one. While Butler’s lyrics were more focused on the personal and real-world, Dio tended to favor fantasy-based themes, although he would metaphorically explore many of the real-world issues that Butler examined on previous Sabbath records. Dio was also a better and more technically proficient singer, which allowed the group to speed up the tempo’s and let rip more. While the eerie malevolence that Osbourne brought to the music was gone, there was an ominous aggression that Dio delivered vocally that freed up the new version of the group to maintain its classic sound while moving forward in a different musical direction.

“Sabbath was a perfect vehicle for me,” Dio told me in 2008. “I could be as dark as I wanted to. I tried not to go over the top. You had songs like “Lady Evil” that hop along. I didn’t get into monsters and nonsensical things. I try write about people and situations all the time. There is no better subject than humanity because everybody is so screwed up and has the tendency to do the same thing all the time. You can write about present situations and things that you see and put them into a darker place, and it becomes what Sabbath became. I think people thought we were more evil and dark than we really were, but it’s how you couch things. The riffs that Tony played made the difference in heaviness, so once again it was an easy vehicle for me to write lyrics for.”

From the opening salvos of “Neon Knights” through the multi-layered title track to the atmospheric closer “Lonely Is The Word,” the album consistently delivered the goods. Interestingly enough, the climactic solo of the latter song, which reportedly emerged during a five-minute jam session in Dio’s hotel room, invoked the style of Rainbow guitarist Richie Blackmore. “Wishing Well” even was more upbeat than one might expect yet added further to the tonal variety on the album. A delicate acoustic number like “Don’t Start (Too Late)” from Sabotage paved the way for the more nuanced nature of a couple of songs here, including the epic, multi-tempo, and at times acoustic title track. (Which Dio said at one point was 25 minutes long.)

Heaven and Hell was well-received

It cracked the Top 30 in America and eventually sold a million copies, reportedly going platinum here before past albums did. It was the group’s first Top 10 UK album in 8 years, their second-longest-running on the charts there at 22 weeks, and “Neon Knights” cracked the Top 25 UK singles. Additionally, Paranoid from the original line-up was reissued and hit #14. Starting in mid-April of 1980, Black Sabbath embarked on a world tour that lasted until February 1981. They co-headlined numerous concerts in the U.S. with Blue Öyster Cult during their four and a half month trek there. Although the “Black and Blue” dates proved to be very lucrative, tensions flared between the bands and only a couple of songs into the Milwaukee Arena show in October a fan threw a projectile onstage that knocked Butler out cold. The rest of the concert was canceled, which resulted in thousands of fans rioting, reportedly causing $40,000 in damages, and securing Sabbath a longtime ban from the venue.

Ward departed partway through the tour before this incident took place. His alcoholism, fueled by missing Osbourne as well as his mother passing away during that time, led him to his exit. But the show had to go on. Former Rick Derringer drummer Vinny Appice would take his place and provide the rhythmic foundation that would carry them through the tour and the next album.

Despite those problems, Butler enjoyed Sabbath’s renewed vigor. “It was exciting for me because it was like a new life for me,” the bassist told me in 2008. I was leaving the band I had grown up with. I had my first child in 1980. It was a total life change for me. I got married, settle down, and stopped doing drugs. For me, it was a complete lifestyle change. I concentrated a lot more on what I was doing musically. It was great going out on tour not being smashed of my head every night.”

The follow up to Heaven And Hell, the superior Mob Rules, much of which was written on the first Dio-era tour also proved to be popular. The snarling title track is, for this writer’s money, one of the greatest metal anthems ever recorded.

The Ronnie James Dio version of Black Sabbath lasted for only two studio albums and a live record – personal and creative differences precipitated an unfortunate split. Following their dissolution in 1982, Ronnie James Dio went on to a fruitful and successful solo career, while Sabbath stumbled through a number of different incarnations although they produced a lot of music that is vastly underappreciated, including their lone effort with the purple singer Ian Gillan, Born Again, which featured some of the darkest tunes they ever laid down, and numerous albums with Tony Martin including the fantastic The Eternal Idol. Sabbath MK II would later reunite for the 1992 album Dehumanizer (which some fans really love) and its tour. Following a subsequent reunion of the Osbourne era, they later reunited again, rechristened as Heaven and Hell, and would release a greatest hits with three new songs (The Dio Years), a new studio album (The Devil You Know), and two live CD and DVD releases between 2007 and 2010. They still possessed the same passion after all of those years apart. While not as overly popular as the classic lineup, this version of Black Sabbath can lay claim to complete artistic legitimacy and produced more than a handful of great songs. Some argue it is better.

Forty years after its release, Heaven And Hell still radiates with the powerful energy and magnetism that proves that a great band could move forward without abandoning the rich legacy of its past. This was a second and important chapter in the career of one of the greatest heavy metal bands of all time.

Bryan Reesman
Bryan Reesman is author of Bon Jovi: The Story and host of the podcast Side Jams, https://cms.megaphone.fm/channel/sidejams
1 Comment