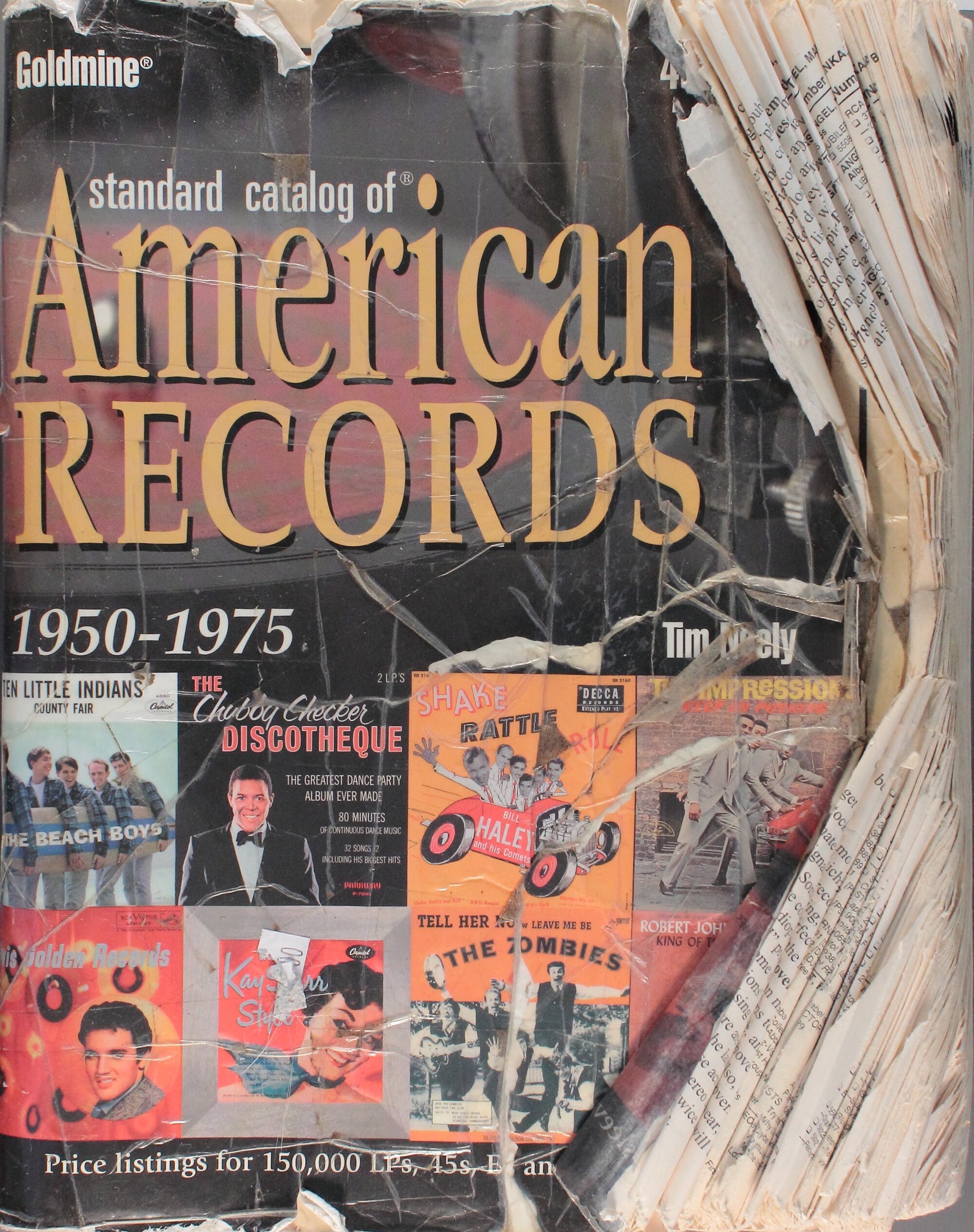 What does this well-worn edition of Goldmine Standard Catalog Of American Records have to do with the Discogs Database?

Ask Discogs’ most prolific contributor and resident expert, Discographies Specialist Brent Greissle (better known by contributors as Diognes_The_Fox). As the proud contributor of over 50,000 items to the Discogs database, he knows a thing or two about cataloging records and the integral role secondary sources — namely books — play in realizing a complete, detailed, and comprehensive database. This copy of Goldmine Standard Catalog of American Records belongs to him, and it was a reliable companion in submitting many of those 50,000 records. As you can see from the photo, it’s been called in for backup on more than a few occasions.

Discogs strives for data accuracy, which requires a certain level of stringency when allowing info into the database. For contributors, this means you should have the physical release in front of you and input the information as exactly as it’s printed.

But what if what’s printed on the release leaves out important details, like session musicians, backup vocals, engineers, or other contributors who fail to get proper credit? “Information and stories in books provide context for all these piles of records,” Greissle admitted. “Discogs does a great job of cataloging all the data. Raw data like that is infinitely valuable, but we also need the stories to tie all these data points together.”

There’s also the fact that, to the untrained eye (and sometimes even to the expert eye), variations between a first pressing and a reissue can be imperceptible. Using supplemental information from books like the Goldmine Standard can be an invaluable resource to help tell these apart by providing information like when a record came out. Before the internet came around and became a dumping ground for knowledge (real and imagined), memes, and everything in between, books were really the only choice when you had gaps to fill in.

“A lot of what we’re doing on Discogs with cataloging records was being printed in books before the internet became a thing,” Greissle said. “When adding details from the Goldmine Standard, it’s about getting info out of more esoteric sources into a more shareable and useable format for a wider audience.”

As for what kinds of books help with building the database, it goes beyond just catalogs and informational guides. “Another printed resource I’ve used in the past are artist biographies. This is especially valuable for finding info about session musicians,” Greissle revealed. “A lot of info might not end up on the record itself, so you can backfill the gaps with what’s printed in biographies. There are plenty of session musicians who don’t get credited on the final release, like the members of the Wrecking Crew.

“A great example of a musician like this is Carol Kaye — one of the most prolific bassists of all time who played on all these famous tracks of the ’60s and ’70s. The bassline for These Boots Are Made For Walkin’ was all her.”

In addition to learning about some of the busiest and most unsung musicians in pop, you can also trace the roots of more famous and celebrated artists. James Seals of Seals And Crofts got his start as a session musician, as did Glen Campbell, who was a session guitarist for almost 20 years before striking out on his own and landing a pop hit.

Besides mining the Goldmine Standard for backfilling the data that’s left off the record, Greissle also relies on books for things like price guides, learning about the historical and geo-political situation around releases, and figuring out what’s missing from Discogs — and how to go about finding it to get in there.

“I have a buddy that collects stuff that’s in the Billboard Top 100, exclusively to catalog his collection by the book. He marks off items as he gets them.” And he’s probably not the only one. Billboard and other printed tastemakers for times gone by serve as a go-to guide for many collectors.

Regardless, as the old saying goes, you shouldn’t always believe what you read. Books, like everything, should be treated with a healthy side of common sense. “Stuff in books is a double-edged sword,” Greissle cautioned. “Information printed in books is a lot more authoritative most of the time, because it’s fact-checked. People are more inclined to believe what’s printed. But if that information is incorrect, which can still happen in spite of fact-checking, they’re still more willing to trust that over a more thoroughly vetted and correct source because of what’s online versus what’s printed.”

Check out Bookogs for more music books, and add your favorites to the database