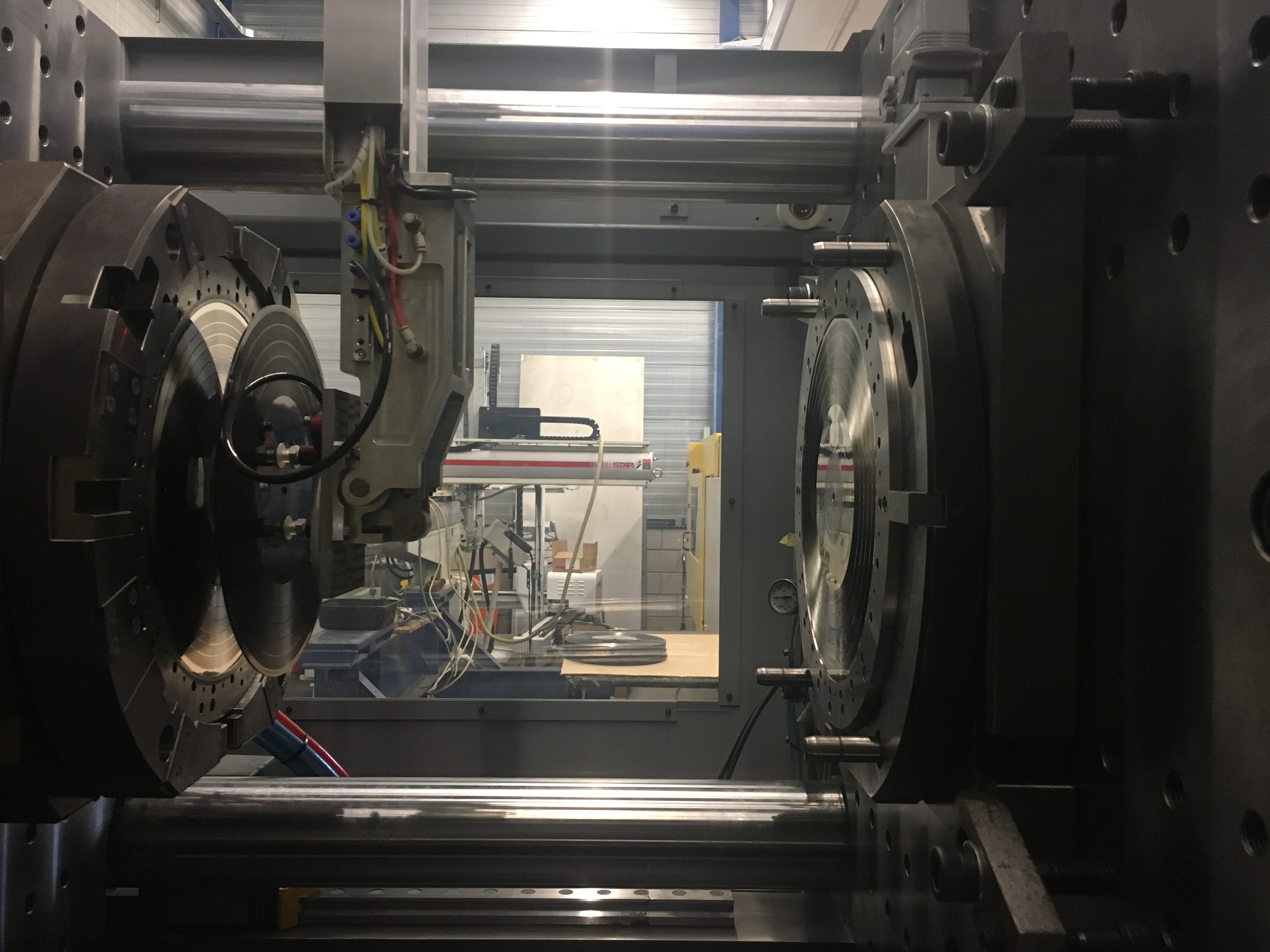 Although his company Symcon is specialized in CD manufacturing machines and supplies, Harm Theunisse was asked by more and more customers whether he could supply vinyl pressing machines as well. So he looked into the current vinyl pressing process, and was amazed that so little had changed since mankind first started pressing records. “There must be another, more environmentally friendly way” he thought, and together with several partners he developed a system for creating injection moulded records.

We visit Harm in Veldhoven, in the south of The Netherlands, to see how this process works. Over a cup of coffee he explains that they are still working on perfecting the quality of the sound and durability of the records, by testing out several combinations of ingredients. So the sound we will be hearing today is far from the perfection he is looking for. But according to Harm, a few well known sound engineers involved in testing (Rinus Hooning, Harry Coster and Sean Davies) have confirmed that the sound quality of the injection moulded records is better than that of vinyl records. The silences on the records for example, are more silent. And although the concept of injection moulded records is not completely new (there are a few 7″s in the Discogs database), making them in a 12″ size has not yet been done successfully on a large scale.

The aim is to reduce the production costs of records, to deliver a better sound quality and to reduce the impact on the environment by using 65% less energy than in the conventional record pressing process. A lot of energy is saved by not using steam. Maintenance of the new machines will be easier, with spare parts being readily available, and the new technique will hopefully reduce turnaround times. It now takes around 12-16 weeks for a record to get to the shops, Harm hopes to bring that down to two weeks, which is a timeline he is used to in CD production. Symcon works together with 7 other partners on developing the process: Record Industry supplies the stampers and their extensive know-how of current pressing processes, Koot takes care of the injection moulding machine, MPB machine casts the parts needed, Geelen automates the process/structure, PRG delivers the ingredients for the new compound, the Fontys Hogeschool and their students are developing a system to test the sound quality and Mikrocentrum is involved in sharing the knowledge gained through the development process. The project, which is named Green Vinyl Records, has received a grant from the European fund for innovation. 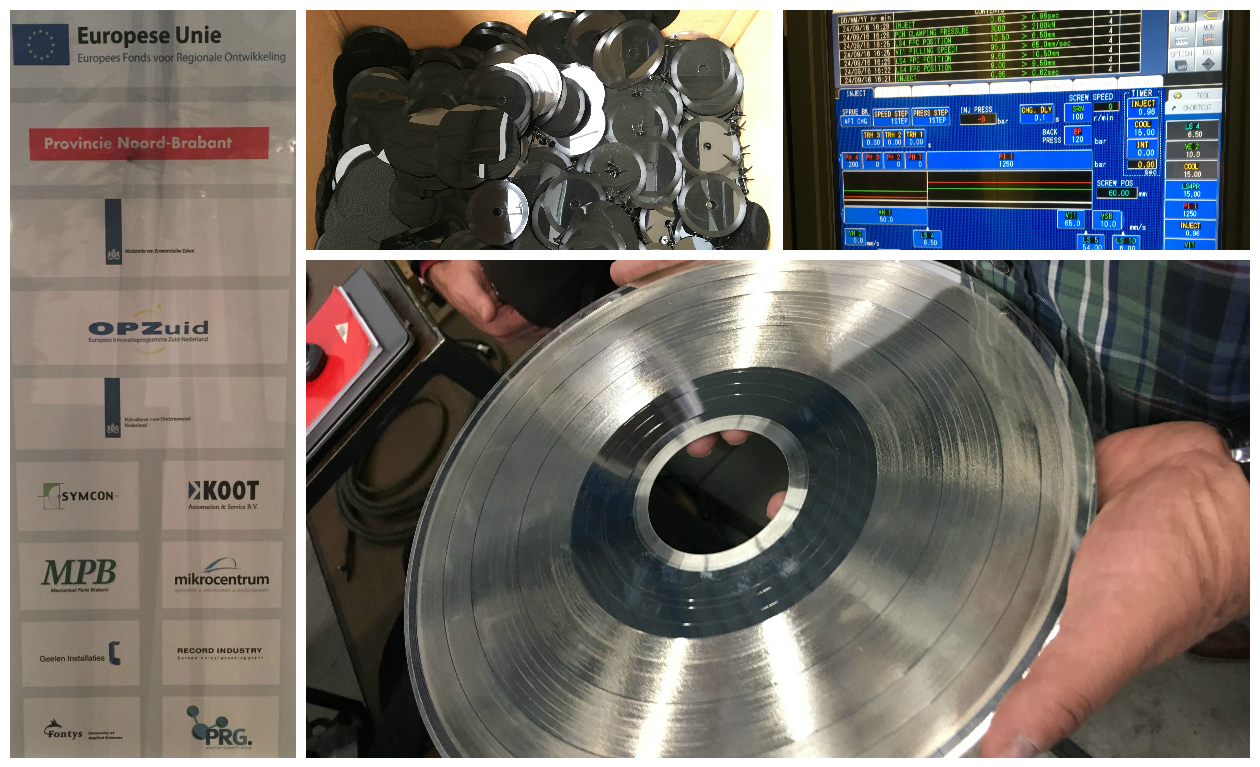 In the conventional pressing method, when a record is pressed, a puck of vinyl is placed between two stampers. Usually steam is used to heat the vinyl to 180 degrees while the two stampers are pressed together for about 8 seconds and cooled for another 16 seconds. The vinyl fills out the stampers and any excess material that spills out is cut off. The force used in this process causes wear on the stampers, which can be used for 1,500 to 2,000 records each on average.

In the injection moulding process, the plastic mixture is warmed up in advance, injected in between two stampers and then pressed for a few seconds and cooled for another 20 seconds to make sure the mixture reaches the outer edges of the stampers. The quantity of the material used is exactly measured, so there is no excess material. Because there is no pressure on the stampers, they can be used for a longer period of time without affecting the quality. “With this method, the plastic is injected straight into the grooves, which copies the grooves on the stamper better than the conventional method, in which the vinyl is being pushed onto the grooves at an angle” Harm explains.

In Veldhoven, Harm demonstrates a small machine that presses test recordings in CD format. He hands us a few of the tiny records from a box full of samples. They feel very flexible, more like a flexi disc than a vinyl record. “We only use these to test the different plastic mixtures and the quality of the pressings. It uses less material and energy than pressing 12″ samples” says Harm, and when we arrive at the location of the ‘real’ machine, in Asten, we understand what he means. The machine is enormous, it measures around 7.5 meters long, 2 meters high and 2 meters wide. “We built it this big, because when we started, we didn’t quite know exactly what capacity we would need, how much pressure etc. Once we get everything right, our next machines will be much smaller than this.” In the middle of the machine we watch from behind a glass window how the two stampers are pushed together and melted plastic is injected. After about 25 seconds, a robotic arm removes the record from the machine and places it on a table next to the machine. The example we see doesn’t have any labels attached, but in production, the labels will be placed before the record is pressed (the same way labels are added in the conventional method). 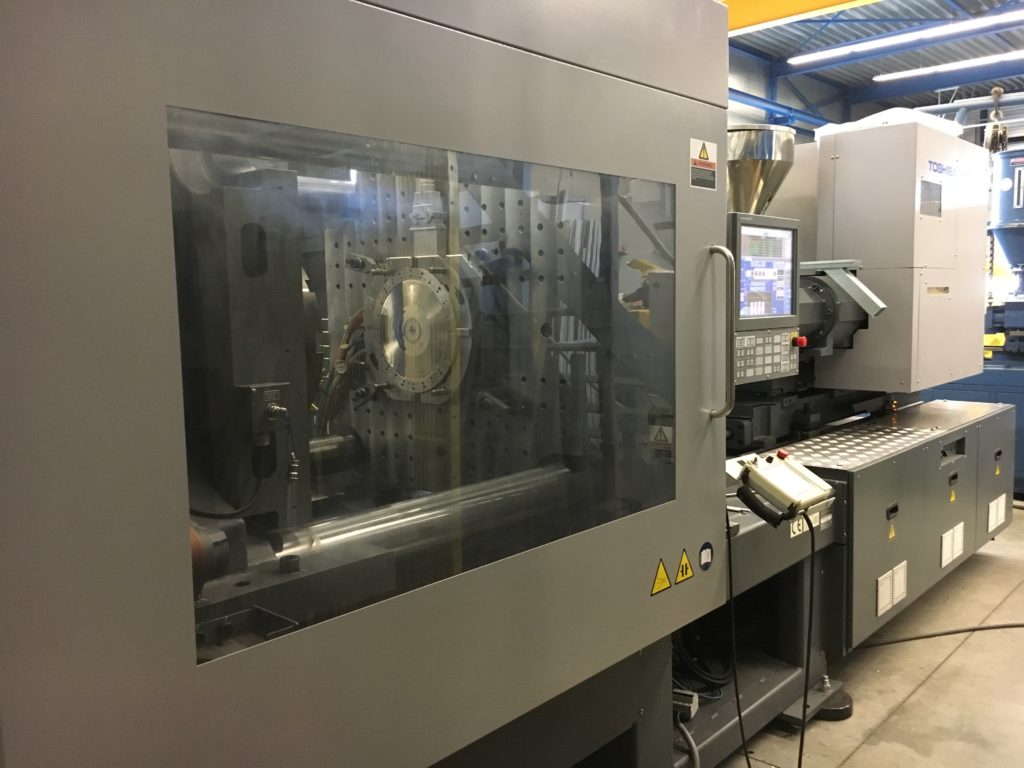 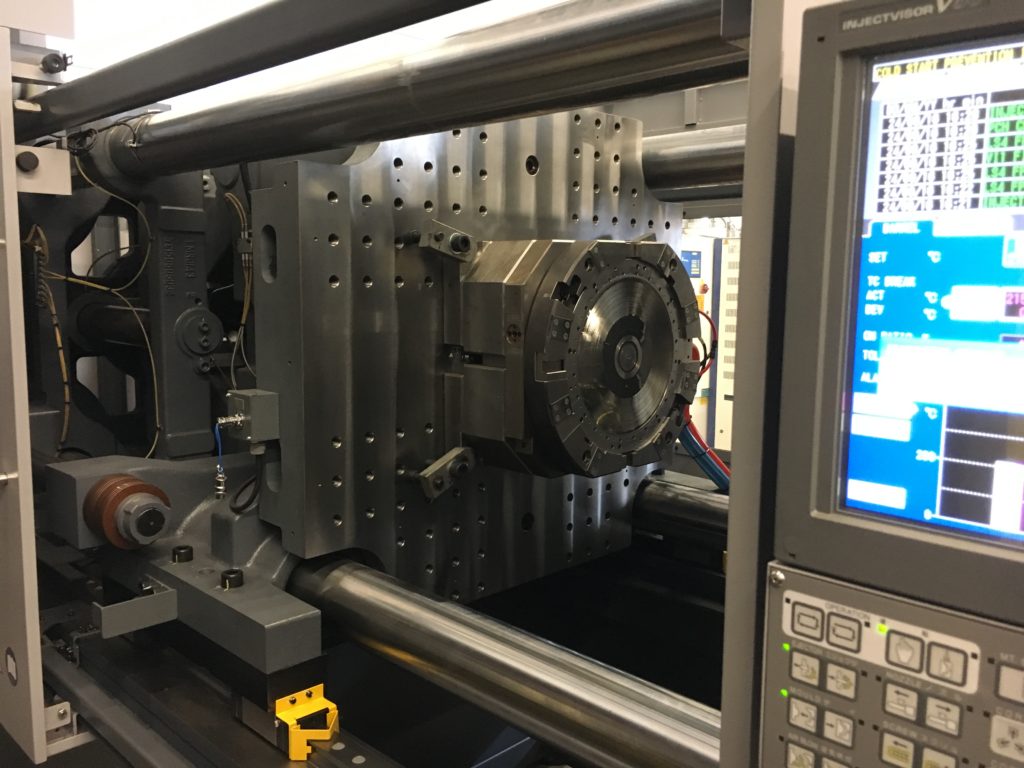 The record feels much more sturdy than the smaller sample we held before. It has the same weight as a vinyl record, the same size, but the edges are not tapered but straight. Harm explains that they can make different shapes if needed. The few white marks we see, are caused by the temperature of the plastic: Normally, the plastic has to heat up for about 4 hours before it can be used. Today, to show us how the machine operates, they have reduced that time significantly. So this is only a sample, the end product should have a perfect black finish. Harm is also looking into options for pressing colored records. “We want people to be able to use their existing turntables for these records and have the authentic experience they have with vinyl records.”

Although they have come quite far in the development process, there are still a few challenges to overcome: 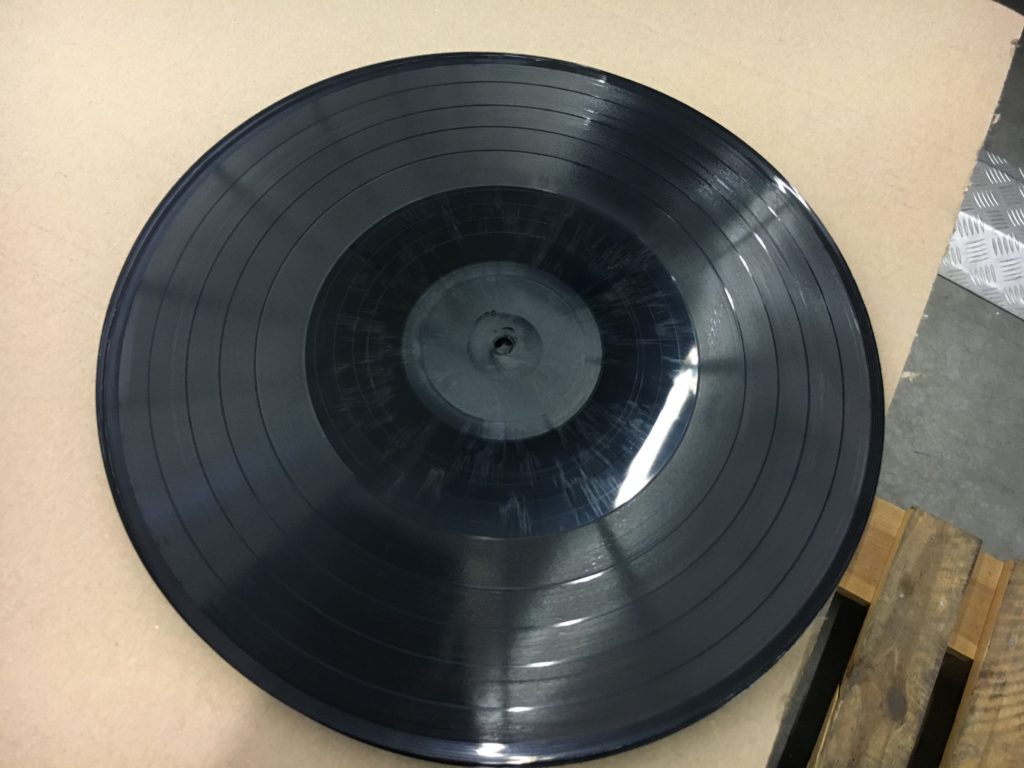 How does it sound?

This is obviously the most important question of all. But since the process is still being worked on, we can not really comment on the sound quality, especially as the sample we’ve seen was created under far from ideal circumstances. There are many experienced people involved in this project, and everyone I spoke to during our visit was enthusiastic about the sound quality. I would think that they would not settle for anything less than at least the same sound quality as vinyl. A regular vinyl record has -62 db (which is a measure of the silence on the record) and in this process they have already reached -72db.

Holding the injection moulded record is a strange experience: It looks like a record, but it feels a bit different. But if Green Vinyl Records can guarantee a durable record with a sound quality better than vinyl, that is made in a more environmentally friendly way, I think they are on to something good. What do you think, would you be interested in adding these to your collection?

Take a look at the video below to see Harm explain the process in detail.