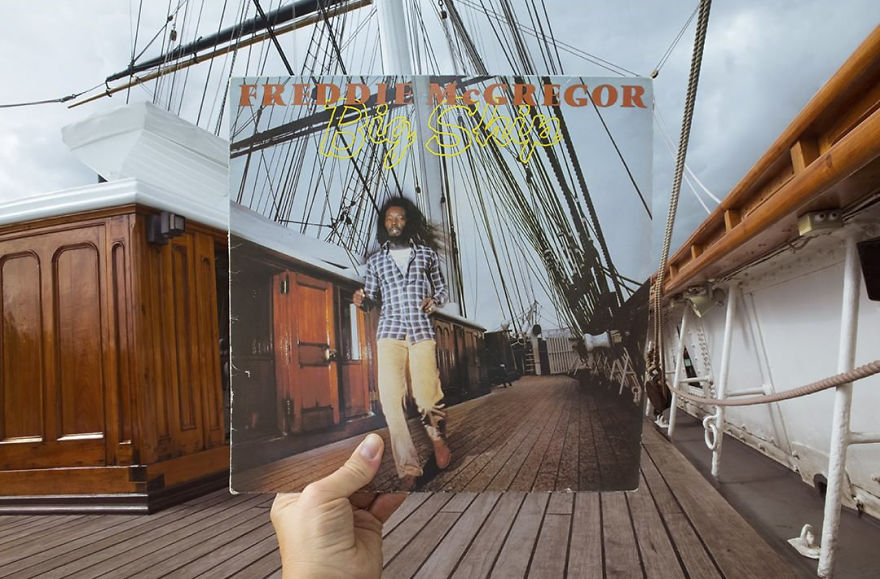 South London photographer Alex Bartsch spent years researching and documenting Reggae album covers, resulting in his time capsule hardback Covers, now available for anyone to time travel through reggae on their own!

Focusing on Reggae record sleeves between 1967-1988, Alex worked in close collaboration with Al Newman, scouting the location of 50+ sleeves whilst tracing someone involved in the album’s making (artist, designer, photographer), to provide insightful context for each cover.

The idea first came to Alex after he bought Joe’s All Stars’ Brixton Cat LP while living in Brixton. 46 years after it was originally shot, Alex photographed the sleeve, held at arm’s length at the original Market location where the cover was shot. The concept for Covers was born. 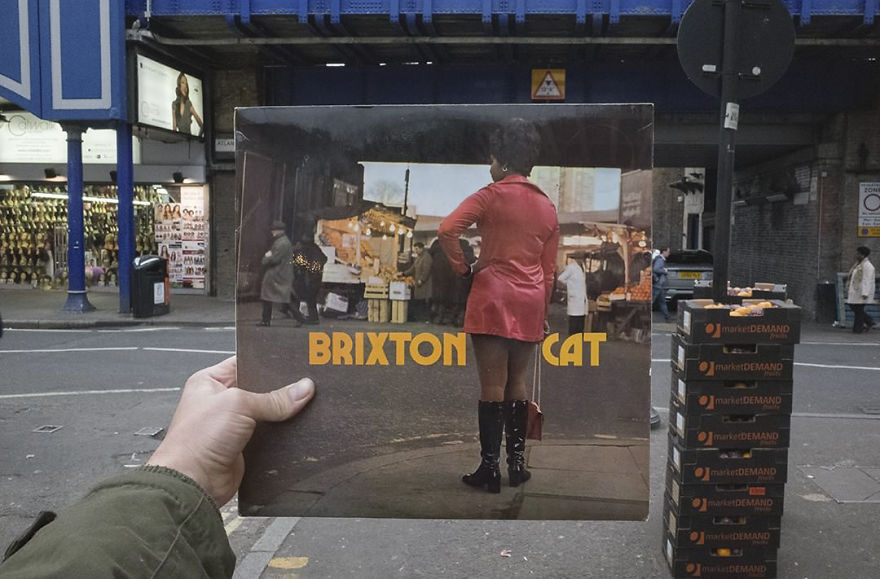 The photos document not only the passing of time across London, but shine the light on a genre which was sometimes overlooked but is central to Britain’s popular culture and identity. 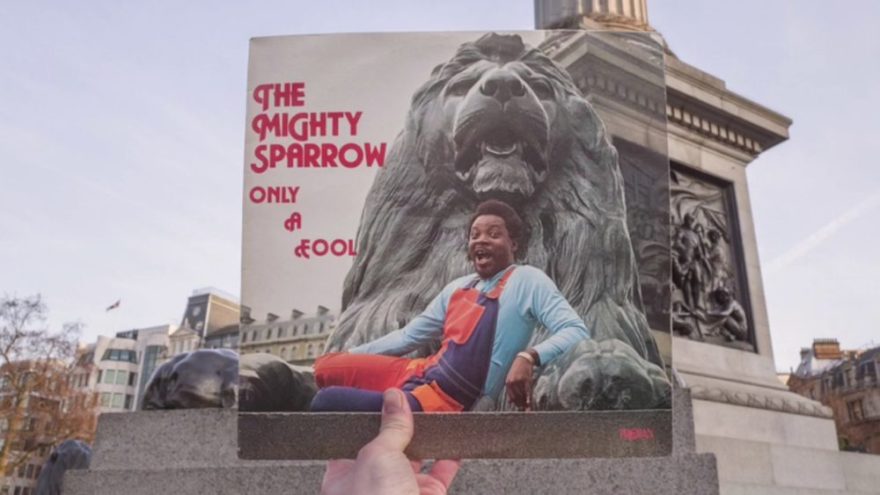 Where did Record Collecting start for you?

I started collecting records about 15 years ago. I was living in London. My friend Jack was really into music and collected vinyl and I eventually followed his steps and started buying my first records. I used to collect mainly Jamaican records at the time.

What gave you the idea for Covers?

The Idea for Covers came when I bought the Brixton Cat LP. I found a copy up the road from my house at Selectors record shop on Brixton Hill. I got my camera and went down to the market where the photo was originally taken. I tried a few things and thought of different ways to recreate the image until I stuck with the concept of placing the record against the background, holding the record cover at arms length in front of me. That was the first cover of the project. After that, Smiley Culture’s Cockney Translation was the second cover that I re-photographed. That was on Plough road in Battersea just behind Clapham Junction station.

Tracking down those involved must have have been tough, how did you and Al go about this?

Researching where the covers were photographed often meant talking to the people involved in the making of the record – the artists, producers, photographers, designers, record label people, etc. Around the time I started the project I was DJing a lot with my friend Al ‘Fingers’ Newman, founder of One Love Books, and I showed him the first few shots. He loved the concept and we decided to work together towards a book. Where possible we wanted to include background information about the covers to give them some context, although in the end we decided to do this for all 50 covers, which involved some very deep research. Al tracked down many artists and other people involved in the making of the records and conducted interviews with them.

We ended up speaking to hundreds of people to try and find out any information about the covers. Once you find someone, especially one of the designers or photographers, they would often put us on to other albums they had worked on, so we would find out about other covers that way. A man called Alan Smith who ran the design agency CCS was very helpful as CCS were behind most of the early Trojan covers, a lot of which were photographed in London.

There were also a lot of dead ends and some people who took a long time to track down just didn’t want to talk at all, particularly artists who maybe had bad memories about the album or the record label. The Pama covers were especially difficult to find any information on. Al once went up to Jeffrey Palmer (one of the Palmer brothers who founded Pama) outside of his club in Willesden to ask if he could do a short interview, and Jeffrey’s wife came out and denied it was him, saying that Jeffrey was away in Jamaica, which seems funny now but was frustrating at the time as we didn’t know who else to talk to!

How vital was Kickstarter to get your project off the ground?

The crowdfunding campaign was a great experience. I had always wanted to try Kickstarter so this was a perfect project to use it for. I think it’s a great concept for people who want to create something without having the capital. It can be a sort of pre-order platform and you can evaluate if your project is worth producing without having to invest all your savings in it. In my case, the Covers project was very well received and I was lucky to have it trending and had a lot of press which helped a lot to keep the campaign visible. I think Kickstarter also makes you focus during that one month to promote your project. A lot of hard work went into it.

Were there any landscape changes which made certain covers impossible?

Surprisingly, the locations of most of the reggae covers I wanted to include in the project hadn’t changed much. With London changing so fast, I thought more were going to be impossible to re-photograph but only a few of the covers’ locations had changed enough not to work well or at all. The Babylon Soundtrack cover photo would have been taken a few meters further back which is now property of Network Rail and impossible to access. Music House Vol.1 on Trojan Records would have been great to include but the Music House’s building that features on the cover is now completely gone.

Difficult one, but which is your favourite shot and why?

That is a difficult one. I like a few for different reasons. Carroll Thompson’s Hopelessly in Love fits perfectly with the background and the album cover is now iconic so that puts it towards the top.

Half Pint’s Greetings and The Liquidator covers were two of the last photos I took, mainly because they were the hardest to track down or to access. For those reasons, I like those two especially.

One of my favourite covers in the collection is Dubbing in The Backyard with Desmond Bryan, his brother Benup and Bunny Lee and his briefcase in which he carried his tapes, chilling on the grass in the backyard of Desmond’s London home. He still lives there to this day and kindly invited me to take the photo.

What’s next for the Covers project, and you?

Since I have finished the book I have continued re-photographing covers of different genres and in various countries around the world. The collection is building. I have various other ideas for the project that are in the pipeline. Unrelated to Covers, I have co-directed a documentary set in Venezuela which I am now submitting it to festivals. I am also working on a new photo project. 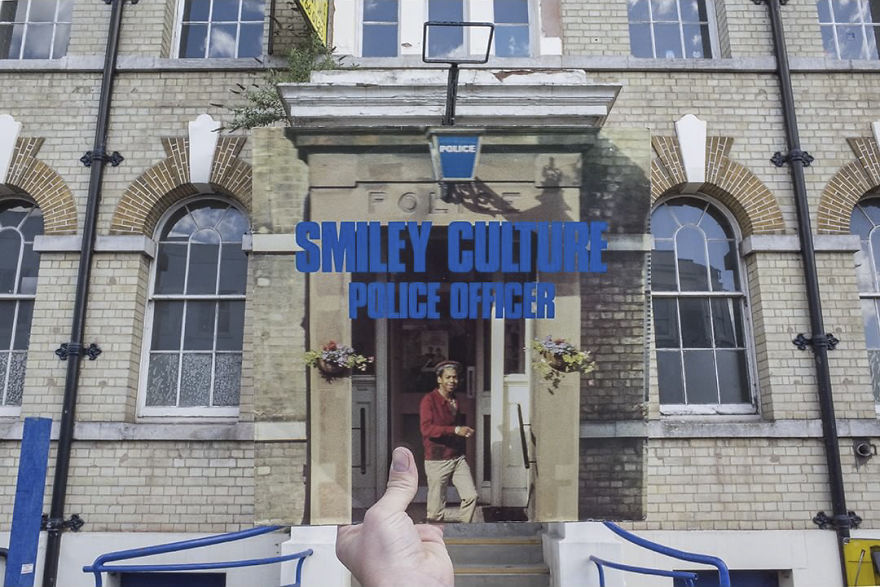 Huge thanks to Alex for taking the time out to chat with us on this great project! You can stay up to date with Alex’s work here and here whilst all new publishings on One Love Books can be found here and here.

Go check out every record cover Alex photographed for the project in a Discogs list, here!