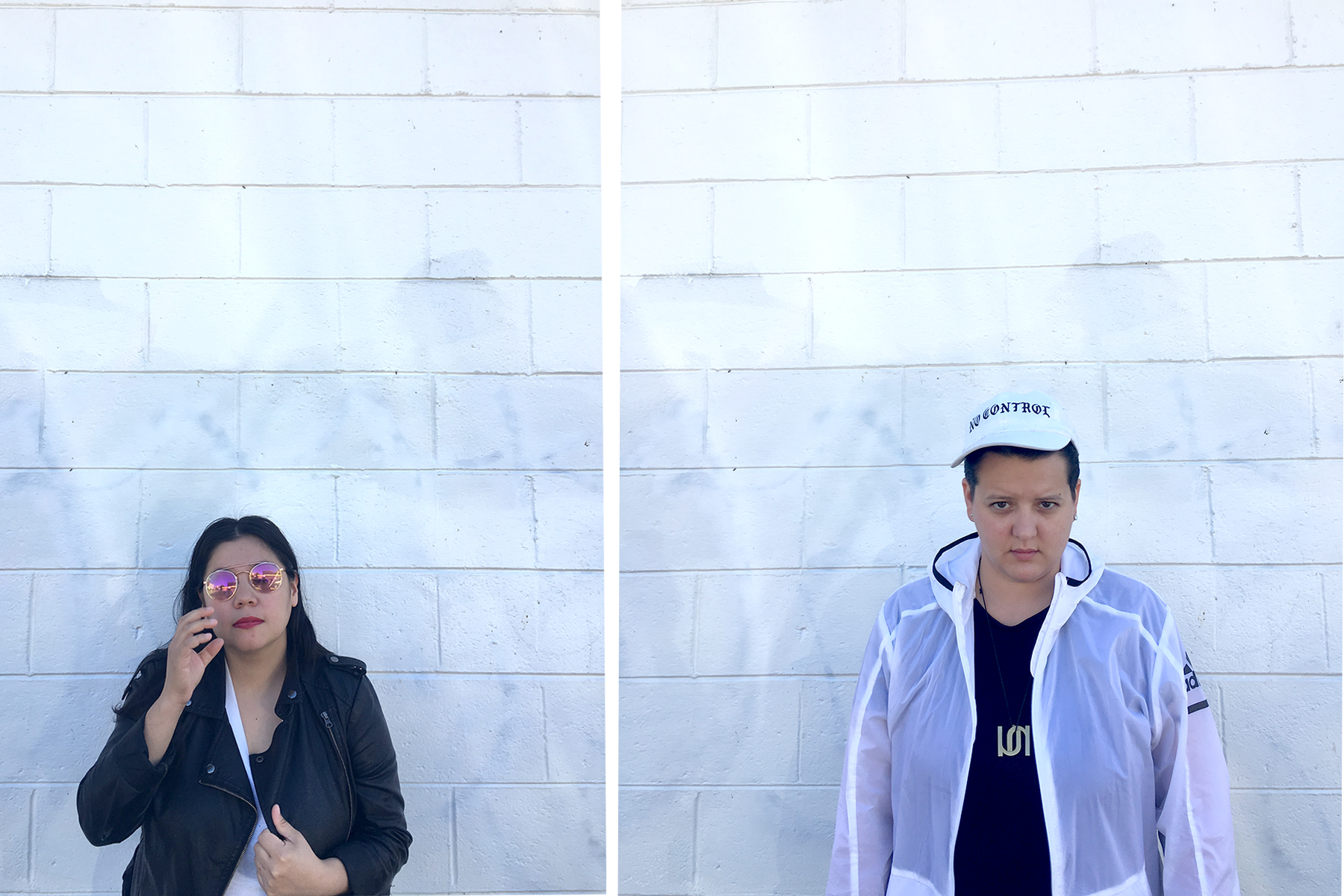 In this fourth and final installment of our series profiling DJs around Portland who are helping to cultivate a more inclusive music scene, we talk to DJs Casual Aztec and Troubled Youth about their involvement with the long-running Bridge Club, the evolution of Portland’s music scene, and some timeless wisdom on dealing with assholes.

Can you start by telling us who you are and what you do, individually?

Ana: My name is Ana Briseño and I am an artist, drummer, and now DJ. I was raised on a farm near Fresno, California but been trapped in Portland, Oregon since 2004.

Megan: My name is Megan Holmes. I am a Photographer, booker, DJ via Chicago. I am DJ Troubled Youth.

How did you get into music? Is it something you grew up with, or did your interest come later in life?

Ana: I’m Mexican so I was born into a legacy of loud music. I started playing an instrument in the 3rd grade when I signed up for school band and learned the baritone horn and bass clarinet. My music teacher at the time told me I should start playing percussion instruments and shortly after I learned to play a drum kit. Over the last 15 years I have played drums in a dozen punk, noise, soul, and cumbia bands. Most recently, I taught myself to DJ and started throwing parties.

Megan: I grew up in the church so there was a lot of music around me. Music was always an outlet and a way for me to relate to other people. Then I got out of high school and started taking pictures of musicians and eventually started working for Hopper PR. Then I moved to Thrill Jockey Records and then actually moved across the country and became a booker for Holocene. So you know just going down that music rabbit hole.

How did the two of you meet? I know you’ve both been involved in Bridge Club (a long-standing queer party in PDX) – did that play a role?

Ana: Megan Holmes and I met 10 years ago in art school and started dating years later. Separately we had been involved in the Portland music scene for many years. After we stated dating we decided to start throwing parties together: Black Book Thursdays, Club Culo, Judy on Duty, Club Destiny, No Control, and most recently, we became collaborators of the long time, already established party Bridge Club.

(SO, ACTUALLY, we started dating because of Bridge Club. Life lesson – always show up looking real cute to a daytime party.)

Bridge Club was started by Mikiel Deguara – DJ Hold My Hand – in 2012. The original DJ line up was Hold My Hand, Pocketrock-it, HufnStuf, Gossip Cat, Little Bear, and Orographic. Local designer, Shawn Ormsby, was doing all their amazing posters and graphics. It was quite a collective.

Originally a small Sunday daytime t-dance in the backyard patio of a bar in Southeast Portland, it changed venues and DJ lineups over the years. Now it resides in a larger patio, with a bigger sound system, and sometimes goes all night. The party has grown and is now dedicated to bringing in DJs from all over the world: Discwoman DJs Umfang and Volvox, Kim Ahn, Chris Cruise, Acid Camp, Yolo Biafia, Asmara from Nguzunguzu, and Eli Escobar.

Megan: Yeah, we definitely met at art school so long ago. However, Ana is an incredible drummer and had some cool bands so I was always trying to book her bands. So there was that too. Bridge Club has always been special for us even when we weren’t involved.Then a few members left Bridge Club and it went on a short hiatus and Mikiel asked us to join. It’s been such an amazing group of people to work with. Mikiel Deguara (DJ Hold My Hand), Rob Loucks (DJ Orographic), Brendan Scott (Dj Pocketrock-it), Ana (Casual Aztec), and myself. There is a lot of love.

Flash forward a little bit and Mikiel and I started collaborating on larger, quarterly events under the name Club Destiny. Working with Mikiel has been such a positive experience. Club Destiny is a night time party that collaborates with video installation artists, set designers, and DJs. It’s over the top but that’s how we like it. We have been lucky enough to bring in Eli Escobar, Shaun J. Wright, Natasha Kmeto, and Asmara. Been working on a lot of ideas for 2017. How would you describe Bridge Club? What would you want people who came to it to know about it beforehand?

Ana: To start, its a queer party! (Meaning, everyone is welcome but you better act right. That’s a hard rule for some people sometimes!) It’s always a daytime party, centered around disco, funk, house, sometimes techno. Larry Levan’s “Stand On The Word” is our anthem. Candi Stanton is our patron saint.

What are some of the most gratifying experiences you’ve had at Bridge Club? Or at any other party, for that matter?

Ana: Getting to book and play alongside some of my favorite DJs and watch them work! I am usually very intimidated but always end up feeling fully inspired by the experience. Also, getting to collaborate with some of the hardest working people in Portland and having them become my close friends thru the process. I feel very grateful just to be a part of the Bridge Club crew for those reasons.

Megan: Bringing in every person on our wish list for Bridge Club. That felt really good. As a booker that can be an impossible task, but we have worked really hard to make each of our ideas happen. This season we met at a bar, made a wish list, and made it happen. I couldn’t ask for better people to work with.

We’ve had some amazing nights at Judy On Duty. There’s been times where the sound has cut out and everyone is chanting. The energy at Highwater Mark for that night is incredible. There’s a lot of sweat and excitement.

Also, having Asmara from Nguzunguzu for Club Destiny was insane. I don’t think I’ve ever enjoyed DJing in that moment more then that night. She is a GOD. She later played an afterparty at the Compound and DJ’d a B2B with Massacoormaan. It was everything. This year has been incredible. Plus I also had the opportunity to open for Kaytranda. I don’t know how this year could get any better honestly.

What sort of challenges have you faced throwing events? Is there anything you know now that you wish you’d known when you were getting started?

Megan: Our most significant challenge for Bridge Club is weather. Its an outdoor party. It’s such an uncontrollable variable. It rains in Portland more then 6 months out of the year, and we want to give the city a great party outdoors ’cause they deserve it. On the flip side if it’s too hot everyone wants to go to the river. So, we’re always hoping for that in-between weather.

But I think a general problem for any party is assholes. Assholes are always a problem. But you know if they find their way in, you show them their way out.

What are your impressions of Portland’s music scene as a whole? How do you view what you’re doing in relation to it?

Ana: That’s a hard question! I have lived in Portland for 12 years now and inhabited the punk scene for most of that time. Obviously Portland is known for all the great rock/punk bands, but it’s been exciting to see the electronic and hip hop scenes grow bigger and get the recognition they deserve. Exclusion of women, people of color, queer & trans folks in music communities is no surprise- my time in the punk community was spent learning ways of creating space for me and my friends and others like us. The same goes as I promote parties and DJ. I get the same strange looks from dudes for being a drummer as I now do as a DJ. So I must be doing something right.

Megan: It’s complex…. at times. It’s evolved since my days of booking at Holocene, that’s for sure. Portland is such a small city still. Most artists and musicians know each other. You’re usually a friend removed from someone. It’s becoming more diverse and inclusive. When I moved here 12 years ago, I could count the gay parties on one hand, parties run by women or POC were even smaller. That is changing. Our main goal with No Control and Judy on Duty is to create a space for self-identified women to be celebrated not only on the dance floor but also DJing. I’d like to see more women across the board in all genres and all roles, from FOH to BOH to security, to talent. The really great thing about throwing events is you get to create what your events look like.

My main goal has also been to book women and genderqueer artists and introduce them to each other. It’s a small city, but I’m always surprised when people don’t know each other! Our community is always growing bigger, but I’m hoping we are also growing closer and looking out for each other more.

In terms of this town, I think we are cultivating something else. I see a lot of this in a national way more then a local. People don’t think of electronic music or the dance scene when they think of Portland. We are tying to change that. We want bookers to want their artists to play here. We want artists to want to play here. And that is happening.

Bridge Club brings the history of gay music to the forefront, what we have contributed in the past and how queer people continue to contribute. We’re here to fuck things up and that feels good.

Megan, you throw Black Book Thursdays – can you tell us about it?

Ana: Megan has been DJing a weekly Black Book Thursday for about 3 years now! Which is crazy and impressive. Mostly crazy.

Megan: I love Black Book and the crew. It's a 49 person capacity bar and fills up quickly. And yeah, it's a weekly. We play rap/hip hop exclusively. It’s a small family of DJs that Peter Webb put together. Massacooraman (Fade to Mind) has been a resident since the bar's inception and we tend to jump on each other's sets from time to time. Black Book is truly where I got my start. Peter has supported me from the beginning.

Obligatory to any Discogs interview: What are some of your favorite tracks to drop into a set?

Megan:  LSDXOXO. I think we both do. I'm such a big fan. Glenn Underground's Remix of Erykah Badu's song ‘Honey’. Katie Got Bandz, Young M.A., Kodie Shane, and Kamaiyah. I love Kamaiyah. Ana just made a sick edit of Young M.A.'s ‘Ooouuu’. I’ve been really digging that track. I could really answer this question a million times over.

Ana: Laszlo Dancehall been ruling it for me lately. Ditto on the LSDXOXO and Young M.A. tracks.

Anything else you’d like everyone reading this to know?

Ana: All you need is bongos and a bass drum.

Megan: Shout out to all my women and genderqueer DJs! Princess Dimebag, Daniela Karina, Natasha Kmeto, BrownAmy, Coast2C, Deena B, Alinka, II Trill, 187 Moochie, Riff Raff (SEA), and all of us working against the status quo.

Check out Ana and Megan's mixes at soundcloud.com/bridgeclubpdx & mixcloud.com/troubledyouth, and see them live at these upcoming events: