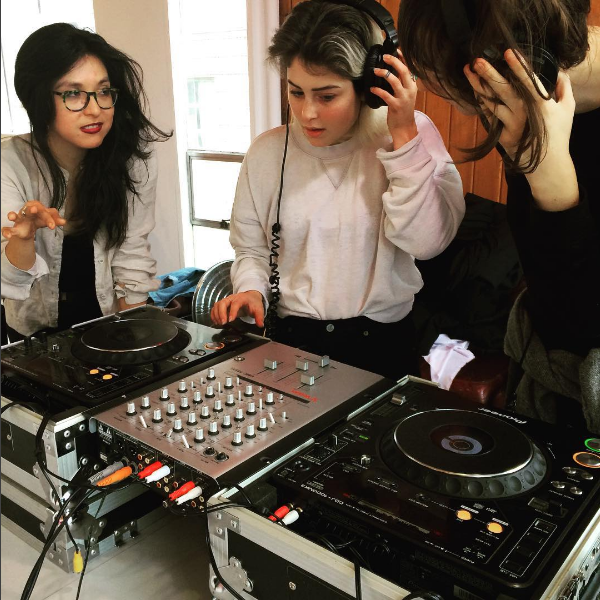 This is the first in a series profiling DJs around Portland who are working to cultivate a more inclusive music scene.

Based out of Portland’s own S1, Women’s Beat League works to provide a space for female and non-binary folks to share skills and equipment in a safe and inclusive environment, whether through workshops, lectures, or events. This week, we caught up with its founders to talk music, community, and the past and future of Women’s Beat League.

Can you start by telling us who you are and what you do, individually?

FL: Hey, my name is Felisha. I am the Executive Director of S1 and the co-founder of Women’s Beat League and the Synth Library.

DKS: I DJ as Daniela Karina and am co-founder of WBL.

AB: I’m Alyssa, a third of the founders of WBL, and I DJ as Nishkosheh.

How did you first get into music? Did listening come before performing and making music, or have the two always been hand-in-hand?

FL: My parents were musicians and artists. All of my earliest memories revolve around sound – listening and performing. Actually all of my memories are linked to songs and sounds. As a kid I would play songs over and over trying to figure out why I connected with them. My dad always told me I shouldn’t become a musician because I would end up poor like him. No regrets on ignoring that sentiment and I am guessing he would be proud of where I am at now. I feel so lucky to be surrounded by artists, supporting their practices, and making/thinking about music every day. Having this kind of community really pushes us all to be better artists and people. It is not easy, but I would not want anything else.

DKS: Though I’ve played several instruments over the years, listening has always been my focus. My dad had a large music collection and always knew what song to put on – I definitely learned the concept of “vibe” from him. When I discovered the internet my first priority was finding new music and I haven’t stopped since. I’m constantly in awe of the flood of innovative sounds that bubble up all over the world.

AB: I got into music because I was obsessed with the radio. I’d always have a blank tape cued up and make custom mix tapes as a kid because living in the suburbs you take what you can get. I came from the active support and participation side- always going to local shows and really getting involved with music around me and inadvertently, that’s how you find your community. I never thought I would become involved on the other end, as a DJ- but Daniela and Felisha actually helped push me to realize that there are many ways to come at DJing. I found my voice by just being really honest with what I like – not being scared to drop a Smashing Pumpkins edit and being totally okay with loving guitar solos.

How did the three of you meet, and how did you end up forming Women’s Beat League?

AB: I met Daniela in 2006 when I was illegally living in The Artistery, an all ages venue that used to exist in SE Portland. I remember I was like, who is this random girl yelling about her 21st birthday being an ICP 2012 Under The Deep Sea theme party? I need to be her friend. I knew Felisha from going to art shows at her old art space, Multiplex. We actually really got to know each other when she became my roommate in 2014- and quickly realized that we had similar “let’s get things done” attitudes.

DKS: Women’s Beat League came out of conversations about access to equipment – Alyssa and I were new to DJing and weren’t quite sure where to start. The idea of crewing up, sourcing equipment and helping each other learn was super appealing. And knowing Felisha, who already ran S1, a space where resource and skill-sharing was the norm, made it so easy to extend the idea beyond ourselves and start creating a community of like-minded folks.

FL: I feel like I have known Alyssa and Daniela for a long time, but I realize now (because of this interview) it has only been a few years. My main focus has been S1, so when we started talking about ideas surrounding WBL and what it would look like, it seemed was a natural progression from everything else we were doing in the space.

In your own words, what are the goals of Women’s Beat League?

DKS: I hope people see WBL as a resource and network of support. We aim to provide access to gear and knowledge in non-intimidating environments, so that any woman or non-binary person who has any interest in music production or DJing can feel it out without dropping money on equipment they may not like or struggling to find the information they need to grow as an artist. We’re also here to create spaces where people can connect, find collaborators, get booked or meet a friend to go dancing with.

AB: For me, it was always about meeting new people who are into music too. I’m a total extrovert, so learning to dj and make music while in the company of other women who I could run ideas and questions off of continues to be crucial. Keeping that energy of helping one another and co-teaching is definitely a major goal for me in facilitating WBL.

FL: We can always be better. We can be supporting more diverse populations, finessing our workshops and thinking about more ways to provide access to space and gear. When we started we knew what we wanted to do, but with zero funding everything takes longer than expected. These are things that we are focused on and I am very proud to know we are pushing beyond our initial goals and creating new ones.

What have been some of the most successful events or gratifying experiences you’ve had running Women’s Beat League?

DKS: I’ll never forget the anxiety of waiting for folks to show up to our first class – followed by the excitement of watching a stream of people roll in. And introducing the Black Madonna to a room that was immediately schooled by her on the revolutionary history of dance music was pretty inspiring.

AB: It’s a toss up- anytime someone decides to invest in a piece of gear because their experience in WBL inspired them, being offered Twizzlers by JLIN, and the first time anyone ever came up to me to ask me my DJ name because they really liked my set.

FL: Every moment spent in WBL workshops, talks, performances is gratifying. This project along with everything at S1 is the reason I wake up every day. Supporting artists like Beast Nest, Coast2C, JLIN and watching Daniela and Alyssa grow as DJs have been moments I will cherish forever.

What sort of challenges have you faced running Women’s Beat League? Is there anything you know now that you wish you’d known when you were getting started?

AB: Access is so important to us, providing low to no cost ways for women/non-binary folks to experience equipment that they may never had have the opportunity to touch. That being said, it can be really challenging to do all of the workshops and classes we want without any money. We’re so lucky the Synth Library is now a asset that we can use, the equipment in there is now really major and I wish we’d been so lucky to have had it when we started up!

DKS: We’re constantly learning how to better engage with folks in our workshops, and fortunately we’ve been lucky to work with so many talented teachers who take the time to keep it interesting. Time and money are always a challenge, but we always find a way to make it work.

What are your plans for the future of Women’s Beat League?

It’s always been about making connections – WBL has become so much more than we could have anticipated and it’s because of the time and support we’ve given and received. We want to work with people outside of Portland, to bring them here and visit them and collaborate on workshops, events and brainstorming on projects that utilize our shared resources and skills. We’re always looking towards having more classes for electronics and DJing, as well as gear sharing and meet-ups to further the explorations after class is over.

We just hope to have as many conversations as possible about WBL with anyone who’ll listen- because then maybe they’ll tell their friends and it will snowball and we’ll have a network of super powerful individuals who are truly running things. Plus, we’ve got a list of our dream acts we’d like to book for our Women’s Beat League Presents shows, so we definitely plan to start tackling that as soon as possible.

Obligatory to any Discogs interview: What are some of your favorite tracks to drop into a DJ set?

Is there anything else you’d like everyone out there reading this to know?

If you want to know more about Women’s Beat League, want to get involved, have an idea for a class, have a question about electronic music, or just generally want to chat with us – We’re at womensbeatleague@gmail.com or check out our website: womensbeatleague.com

We’ve got a radio show on XRAY.fm you can listen to here, and archived mixes here.