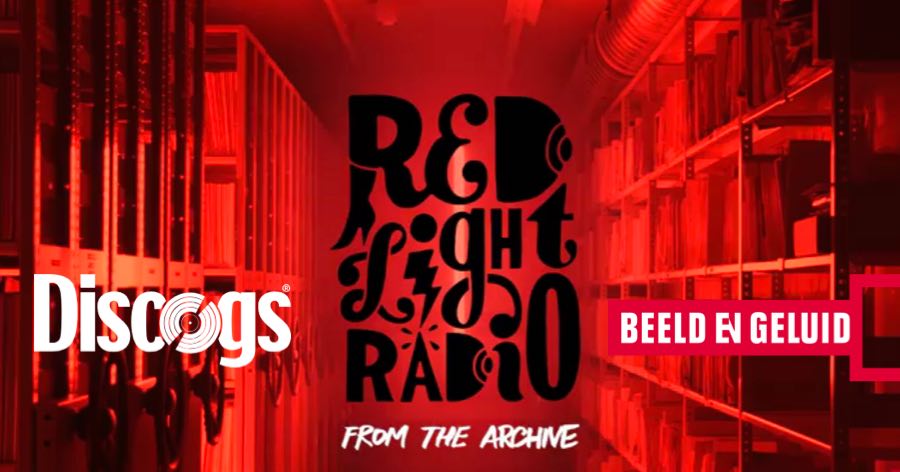 What do 300,000 records look like? Actually they didn’t take up nearly as much space as I expected… But we love well organised catalogues, we love databases, we love pristine collections and we love finding new music when digging through old records, so we’re super excited to be working with RE:VIVE and Red Light Radio in Amsterdam, following renowned DJs as they sift through one of the biggest collections in The Netherlands. RE:VIVE is an initiative from Nederlands Instituut voor Beeld en Geluid (The Netherlands Institute For Sound and Vision) that brings archives and musicians together to create new productions inspired by old collections.

Sound and Vision is the media archive of The Netherlands with literally millions of hours of sound and vision material, including 300,000 vinyl and shellac records, 4,000,000 pictures and 20,000 artifacts from media history (such as broadcast equipment, televisions and computers). With 10.5 million Releases in our catalogue, Discogs is currently the world’s largest online music database, but Sound and Vision’s physical music collection adds up to almost 3% of that. They are also a big part of the Netherlands Digital Heritage Network, developing a national system to improve the visibility, usability and sustainability of audio-visual heritage. We feel right at home working with them because we’re on a very similar mission: to build the biggest and most comprehensive music database that has ever existed, a site with discographies of all labels and all artists, all cross-referenced, to which anyone can contribute freely.

In a world where we rightly expect people to make useful contributions to society, the the utility of the archivist can be harder to define than that of the builder, the doctor or the law-maker. However that’s only because their work is less tangible and less immediate. Archivists, and the archives they create and exhibit, are in fact indispensable for two reasons. Firstly, they act as strongholds of information about how people lived and societies operated. Secondly, they help document how people and societies change, and therefore help us understand how our present world came to be. In sum, they are the base from which the past informs the future.

What better means for understanding people and societies than to see their faces and hear their music? You don’t even have to speak the same language. To me this makes music one of the most important things to catalogue and make accessible to everyone forever. It takes real effort to prevent the painstakingly woven fabric of life from returning to its natural state of short, unconnected fibres. As most record collectors will tell you: it takes countless hours to accumulate and organise a collection, but few other things will ever come so close to summarising who we are and what we care about.

This is also one of the reasons I have so much respect for the 450,000 Contributors to Discogs and the effort they put into cataloguing the world’s music so that anyone can learn and discover things about all the music in the world.

However the realisation that sound collections are important, and should be a part of any cultural heritage program worth its salt, has in fact only recently begun to get traction in the public arena. Sound and Vision is a world-leader in this field, and our office in Amsterdam is only a short train ride away. So I was over the moon when we were invited to explore their sound archive alongside some of Amsterdam’s most prodigious DJs and selectors, as part of a program called “From The Archive”, alongside local radio stalwart Red Light Radio.

Sound and Vision’s music collection is not actually as large as neighbouring Rotterdam’s Muziekweb, but it’s part of a more holistic collection, covering the whole of Dutch media history, not just sound. And it has a far more interesting backstory: it started life as the radio music collection for public broadcast radios in The Netherlands. At the time it began to take form, in the late 1960s, the public broadcast radio system was very complex, with multiple omroepen (stations) sharing the same frequencies. There were, for example, several different news, sports, politics and musical programs that occupied different time slots across five radio frequencies. This system has its roots in the political concept of Verzuiling (Pillarisation), under which societies are organised around segments  or ‘pillars’ along religious or ideological lines (only culturo-politically, not physically!). Each pillar is granted its own social institutions, such as newspapers, broadcast networks, political parties, trade unions, banks, schools, etc. Ever the practical innovators, the Dutch decided it would be a good idea to build a single repository for all the records (and later CDs) that all the different pillars’ radio stations could share. This collection formed the basis of what would later become Sound and Vision’s music archive.

Some of the rarest items in the collection are the various performances that were broadcast live for radio. One such artifact is a film reel of Aretha Franklin and The Sweet Inspirations’ legendary performance, in 1968, at the Concertgebouw Amsterdam. The footage is amazingly well edited in a dizzying, pre-MTV style full of rapid zoom cuts between stupefied dancers and Aretha’s sweat drenched faced, and complete with backstage cigarettes before the performance. The highlight of the show is definitely watching the MC try and miserably fail to make everyone sit down! Apparently standing and dancing were not befitting of the prestigious venue. These moments make the reel a palpable document of the changing face of society in the late 60s, which is not only super entertaining but critically relevant in a 21st century Europe again struggling to understand how to deal with the rapid change of its social fabric.

However, for me, with my heavy musical bias, the most culturally significant part of the collection is still the 300,000 records that represent most of what was broadcast on public radio in The Netherlands from the 1960s to the early 1990s. By the mid-90s most stations had switched to digital resources and there was no longer any need for the shared record collection, although the collection has always been very well preserved, and continues to be. But what’s the point in just preserving things? Archives need to be used and participate in creative activities if they are to be relevant.

Sound and Vision are, again, world-leaders in this space. They recently spent the better part of a decade digitising over 100 years of media as a part of their Images For The Future project, which has enabled them to engage in unprecedented educational, cultural, and economic activities, including  joint exhibitions and projects with other knowledge institutes and companies. A case in point is this RE:VIVE project, which is bringing together the worlds of archives and Electronic music, to change the way people hear the past. The combination is pretty much heaven for fans of music, archives, catalogues and collections.

One of their first projects was to have contemporary sound artists create new conceptual works with old sounds from the archive. Having the artists work within these constraints meant they were forced engage with the heritage in a different way. Music is obviously a universal access point for understanding or learning about people and cultures, but in trying to make a conceptual album the artists are forced to learn some history and try to understand the mindset of the culture where the sounds came from. Ian McDonnel of Irish outfit Lakker says “It makes you question how people act in society, and the way human beings approach any situation or problem…do they think about it in scientific or practical ways, or in a more holistic way, or look at the cultural and artistic aspects of it?” Music is such an abstract form of expression that at the end of the day these new works are also just music that anyone can enjoy. Some of them are also dance floor ready, and have been played by the likes of Aphex Twin and Paula Temple. But the deeper context is there for those looking to go a little further. What a nice surprise to find out you’re actually dancing to mechanical rhythms pulled from archival footage of  flood control facilities.

Recognising that the culture of selecting and spinning records is woven deep into the social fabric of Europe, especially in Amsterdam, RE:VIVE’s latest project hones in on the talent of some of those local selectors. In collaboration with Red light Radio and Discogs, “From The Archive” explores the possibilities for creating new from old when you have an incredible collection, creative selectors and a comprehensive database built by a community of music nerds. This is not an algorithm. This is an old school approach to selection and curation, relying simply on the depth of knowledge of the selectors.

Over the past few weeks, some of Amsterdam’s finest selectors – Gilbert Cohen (AKA DJ Gilb’R), Robert Bergman, Femke Dekker (AKA Loma Doom) and Clélia Zida (AKA Kléo) – have spent a day each digging through Sound and Vision’s 300,000 strong record collection. I spent time catching up with each of them and talking about archives, activism, personal cataloguing methods, Spotify, YouTube, and the changing shape of the music landscape. You can read about their day in the archive and their selections here:

One thing that should have seemed obvious, but really stood out from talking with each of them, was the admiration they had for the people behind the archives: the people who collected and catalogued all the music and the people who find new ways to use them.

Thanks a lot to the team at Sound and Vision for holding on to all these records for so many years, and for opening the vaults to let us all have a peek. And thanks to all the Discogs Contributors that catalogued the releases, artists and labels mentioned throughout this series. Without you we wouldn’t be able to connect the dots.