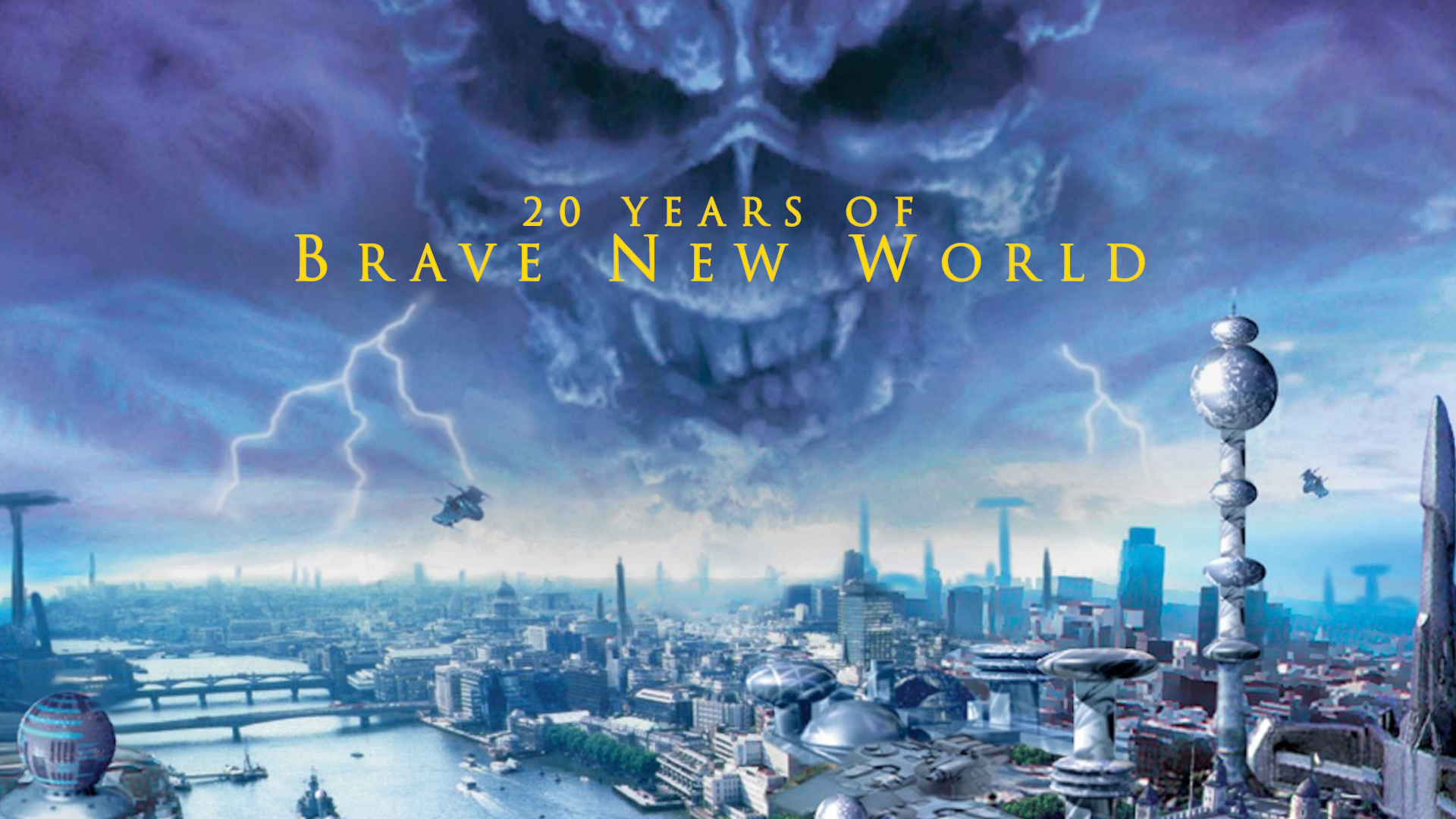 It may be something of a stretch to state that, as Iron Maiden’s career flourished or floundered over these past 40 years, so has the overall commercial health of heavy metal music; but this certainly seemed plausible at the time of the English group’s victorious return via 2000’s Brave New World album.

After all, Maiden pretty much ruled the 1980s, just as metal had, then struggled through the 1990s, when changing musical fashions coincided with the departure of charismatic frontman Bruce Dickinson (replaced by ex-Wolfsbane screamer Blaze Bayley) to erode the band’s creative powers, their record sales, and even their once unassailable touring business, which saw them “demoted” from stadiums to arenas, to theaters.

Looking back on his decision to embark on a solo career in a 2000 interview with Lollipop magazine, Dickinson said,

“I hesitate to say it, but [Iron Maiden] became a little … comfortable. Complacent. One of the reasons why I quit the band was because I felt the other guys were pretty pleased with where we were, and we were no longer struggling or trying anymore. I wanted to keep trying. Not trying new things to be fashionable — because no one in this band gives a shit about being fashionable — but to “react” to the times. React, rather than trying to be significant for the sake of it.”

So, Bruce went off to “keep trying” via 1994’s Balls to Picasso and ‘95’s Skunkworks, while Maiden bassist and chief songwriter Steve Harris did his best to steer his bandmates down the metallic straight-and-narrow on 1995’s The X Factor and ‘97’s Virtual XI … yet something always seemed to be missing, for both parties.

And in his autobiography, What Does this Button Do?, Dickinson himself admitted that his late ‘90s solo albums, Accident of Birth (‘97) and The Chemical Wedding (‘98) had started sounding increasingly similar to his old band, concluding that “There were only a few options available to Maiden, and one of them was to ask me back.” Even more telling, when Bruce quizzed his solo band on the matter, their answer was, essentially, “The world needs Iron Maiden – you have to do it.”

Steve Harris seemed to agree, so after handling the messy business of dispensing with Bayley’s services, the formal announcement was made in February of 1999: Dickinson was back, and so was beloved guitarist Adrian Smith, transforming Iron Maiden into a rare, triple-axe attack alongside Dave Murray and Janick Gers, rounded out by the one and only Nicko McBrain bashing the drums in the back, of course.

Eager to get reacquainted, both personally and musically, Maiden’s new sextet lineup hit the road that July on the Ed Hunter Tour (named for a video game that was totally overshadowed by the reunion excitement), which served to knock off any rust and honed the band’s focus for the challenge that followed: recording a brand-new Iron Maiden studio album – their 12th overall and first with producer Kevin Shirley.

It was Shirley who convinced the band to eschew the usual process of recording instruments separately and perform the new material live in their Paris studio, later telling Metal Hammer:

“I could see how there was this intangible energy you’d get, just from having musicians playing together. So, I was dead keen on Maiden doing that. Steve, in particular, was very hesitant about it … so I said, ‘If it doesn’t work then we’ll go back and do it as you’ve done previously, but let’s give it a try!’ Pretty much, as soon as they’d done one or two run-throughs, he said, ‘I never want to work another way again!’”

Said Harris succinctly to Kerrang! magazine, at the time: “All I care about is how it feels now, not how it was.”

This recording approach, aside from promoting band camaraderie, reflected a more collaborative songwriting process, described as follows by Dickinson to Lollipop: “We got to rehearsals and I said, ‘Well, Adrian and I have a few things;’ Janick says, ‘Steve and I have been working on some things too;’ and Davey says, ‘I’ve got a few things with Adrian and Steve as well.’ We all worked on those combinations. We only kept the good ideas, but all the stuff we kept had been the product of people working together.”

The end-results on Brave New World clearly reflected this unprecedented display of teamwork with ten songs that almost studiously checked off every sonic box that, in unison, comprised the classic Maiden formula – giving fans exactly what they wanted and nothing else, since this was hardly the time for getting cute!

The first song and single, “The Wicker Man” (a reworked leftover from Dickinson’s solo period), was the very picture of Maiden-esque economy, tracing its urgent brevity to prior opening barnstormers like “Prowler,” “Aces High” and “Be Quick or Be Dead,” but, beyond this point, the song lengths immediately started growing, as the band boldly revisited their quasi-progressive compositional style of old.

Harris, Gers, and Dickinson joined forces for the evocative “Ghost of the Navigator”; Murray, Harris and Dickinson handled the album’s anthemic title cut; then came the record’s only “solo” effort in Steve’s poignant “Blood Brothers,” which was dedicated to his father, but very much spoke for the spirit of Iron Maiden’s revitalized brotherhood.

Ensuing material like Gers’ and Harris’ “The Mercenary” and “Dream of Mirrors,” plus Murray’s and Harris’ “The Nomad,” had been salvaged from the waning days of the Blaze era, but one of Brave New World’s very best offerings, “The Fallen Angel,” resulted from Smith and Harris’ renewed collaboration.

Wrapping things up was another lyrically imaginative number in “Out of the Silent Planet,” composed by Gers, Dickinson, and Harris, and then the possibly self-referencing Murray/Harris partnership, “The Thin Line Between Love and Hate,” neither one of which would go down as long-term Iron Maiden standards, but hardly let down Brave New World’s clear-cut return to form.

And, best of all, fans seemed to agree, as the album shot to No. 7 in the UK Charts, No. 39 in the U.S. with over 300,000 units sold the first week (this being a time when physical records still shifted serious quantities), and immediately reversed Maiden’s decade-spanning decline – they were soon packing major arenas as if the 1990s had never even happened.

Looking back now, it’ safe to say that Iron Maiden has enjoyed a second golden era these past 20 years – creating a legitimate Brave New World by pooling together their considerable talents, respecting their shared historical legacy, and exerting sheer willpower upon their destiny.

Heavy metal thanks them very much.