Open the booklet for the Jimi Hendrix Experience’s Electric Ladyland 50th Anniversary Deluxe Edition, and you’ll find a curious image on the first page. It’s a handwritten note from Hendrix to Reprise Records.

“Here are the pictures we would like for you to use anywhere on the LP cover,” writes Hendrix on a Cosmopolitan Hotel notepad about his upcoming 1968 third album. “Any drastic change from the directions would not be appropriate according to the music and the group’s present stage.”

His language becomes punchier; words are underlined. “We have enough personal problems without having to worry about this simple yet effective layout.”

As it turns out, Hendrix wouldn’t get his wish until 2018. On the cover of the new Ladyland boxset, the shot he always wanted graces the cover: an image of the Experience by photographer (and future McCartney) Linda Eastman, lounging with various children by an Alice in Wonderland statue in Central Park. 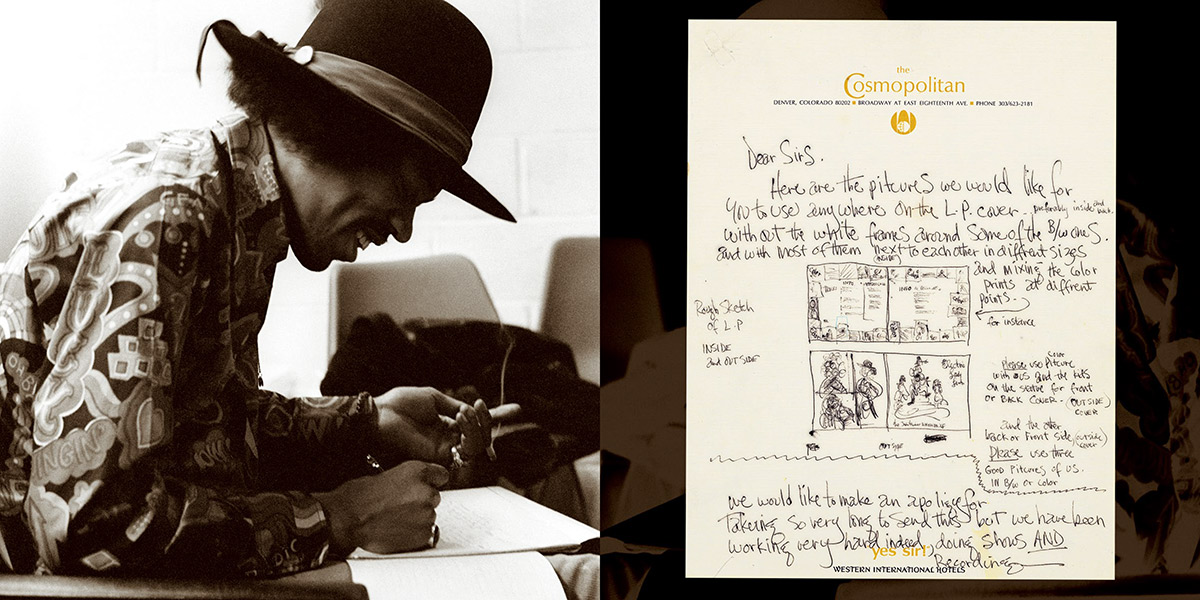 But in Hendrix’s day, his wishes were often ignored or circumvented. The sleeve of his previous album, 1967’s Axis: Bold As Love, depicted Hendrix, bassist Noel Redding and drummer Mitch Mitchell as incarnations of Vishnu on a generic religious poster. Hendrix had no hand in the concept, calling it disrespectful.

And for Electric Ladyland, both Reprise and the UK label Track Records ignored his cover submission. The latter went through their own art department, using celebrity photographer David Montgomery to shoot a seedy-looking tableau of nude women for the outer sleeve against Hendrix’s wishes.

The “nude” sleeve embarrassed Hendrix and was a turnoff for the record market; UK record dealers either turned the cover inside-out or refused to stock it altogether. In a booklet photo, he pretends to rend the cover with his teeth.

Public controversy aside, fans should be happy to know that this new Ladyland box set not only presents the album as intended, but sounds better than ever; a blown-up, 48-track version of Hendrix’s spaciest, grandest, most quintessentially bold-as-love studio project.

There’s a lot for Hendrix fans and the uninitiated to feast on across these 48 tracks. There’s the original album, freshly remastered by Bernie Grundman, but also a wealth of unreleased Ladyland material that captures Hendrix’s prodigious pace and limitless imagination.

Most beguiling to fans may be the Drake Hotel demos; Hendrix lived at the Manhattan building for a time, laying down ideas on a Teac tape machine as they popped into his head. The effect of hearing these early run-throughs of Gypsy Eyes, Cherokee Mist and more, possibly minutes after Hendrix dreamt them up, is shockingly intimate.

Then, the listener is transported to within the studio walls at London’s Mayfair and Olympic studios and New York’s Record Plant. There, the Experience works out electric odysseys like Crosstown Traffic, Gypsy Eyes and Voodoo Chile (Slight Return) with a little help from some familiar faces: drummer Buddy Miles, pianist Al Kooper, and — oddly enough — a guest appearance from Stephen Stills on bass.

Half the fun of Electric Ladyland was Hendrix’s mad-scientist use of recording technology, though — and the bonus material here provides a unique look into how Hendrix achieved his psychedelic textures. Specifically, we hear how they overloaded the interstitial tracks with tape delay and reverb to create otherworldly sounds. 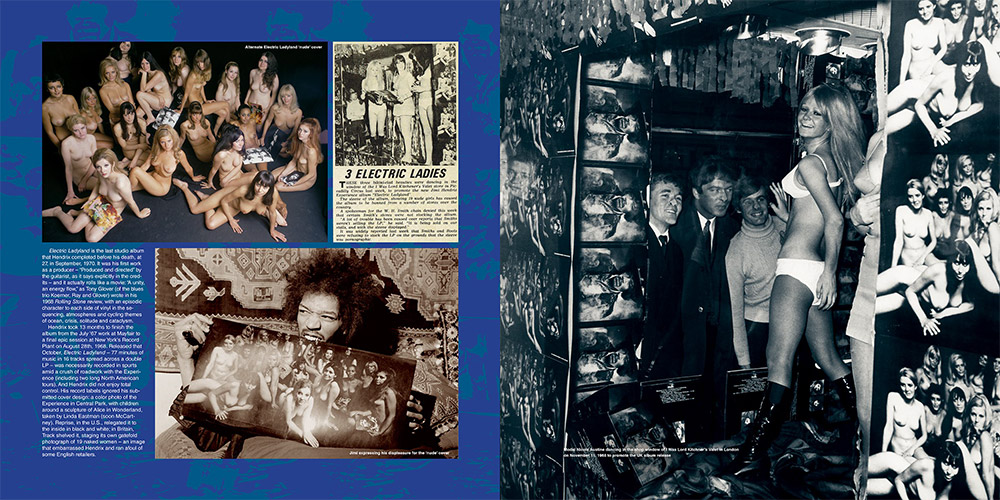 John McDermott, who manages Hendrix’s catalog, is especially effusive about how …And the Gods Made Love, an eerie drone that kicks off the album, came to be.

“Jimi’s voice comes in backward and Mitch’s tom-toms were slowed down ridiculously,” he writes. “The track is phased and we put a lot of Mitch’s cymbals in backward for the effect.” All this gonzo experimentation was to fulfill Hendrix’s science-fiction vision for Ladyland. He wanted to open the album with the sound of a spaceship landing.

Ladyland’s organist, Mike Finnigan, was just in awe that Hendrix could summon such otherworldly sounds from relatively basic equipment. “Having heard Jimi’s first two albums, I thought he’d be using stacks and stacks of amplifiers and electronic toys to get his sound,” he recalls in the notes.

But as he found, Hendrix’s hair-raising lead sound mostly came from consumer-grade technology. “He was using this small, blond, 30-watt Fender Showman amp,” he writes. “I couldn’t believe it.” 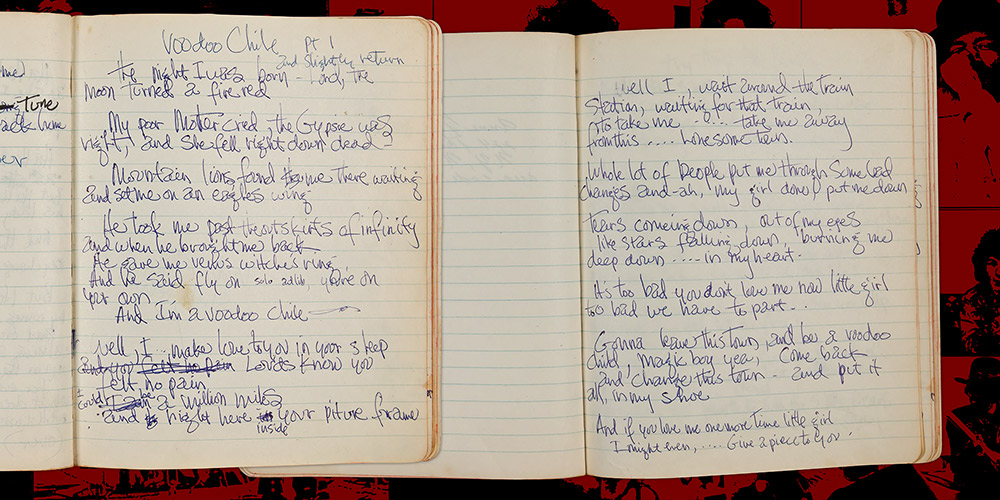 The Electric Ladyland boxset also ventures beyond the studio walls. Disc three offers a sonically flawed but high-energy Experience concert recording, taken from their Hollywood Bowl gig on Sept. 14, 1968. Its blown-out sound wasn’t a label-approved Hendrix recording, but a previously unknown soundboard recording drawn from the console by a bootlegging fan.

At the Hollywood Bowl, the Experience’s sound is blown out; it gasps, sputters and hisses. For live Hendrix collectors, there may not be a version of Purple Haze, Red House or Fire quite like this out there. Although much more polished live Hendrix is readily available on the market, the gnarly sound of this LA date only adds to the fun. For all its warts, it could be your own worn-out bootleg tape.

At Last… The Beginning: The Making of Electric Ladyland, a behind-the-scenes look into the album from 1997, rounds out the new collection. While the addition of a 20-year-old documentary might leave certain fans wanting for new content, At Last… The Beginning isn’t a buzzkill at all. The live footage throughout is sterling, and interviews with collaborators Buddy Miles, Steve Winwood, Dave Mason, and more provide an even clearer look into Hendrix’s world.

Hendrix, who passed away in 1970, never got to see Electric Ladyland released truly how he saw it — but in 2018, it’s a better-late-than-never proposition. As the man himself sang in the title track, “I want to show you the different emotions / I want to run to the sounds and motions.” 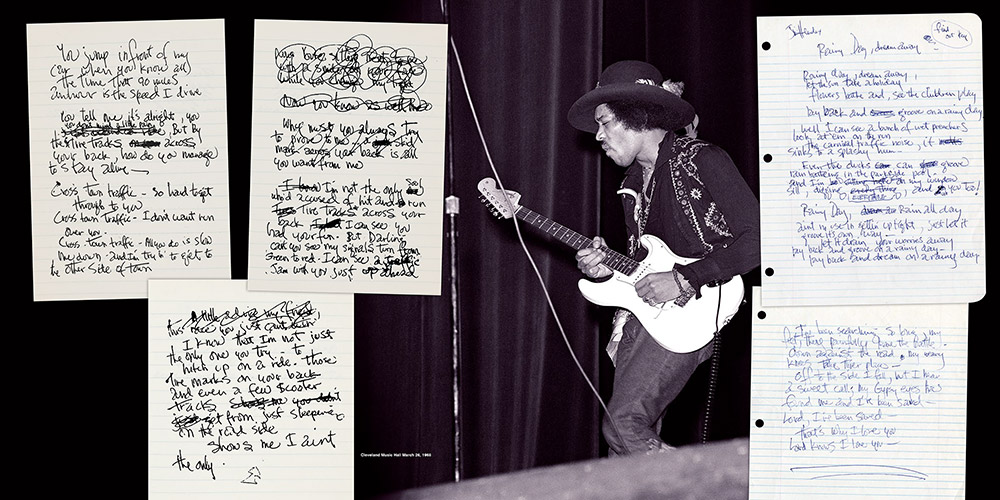