Craft Recordings is celebrating the 70th birthday of the Prestige label with a yearlong reissue campaign. The first item on the list is Coltrane ’58: The Prestige Recordings, a chronological collection of Coltrane’s Prestige sessions from 1958.

John Coltrane released a whopping 45 studio albums in his lifetime, not to mention scores of compilation albums and live recordings. This prodigious output from the rule-shattering saxophonist has lent itself to obsessive collecting — often at a lofty price.

Whether you dig the early material, Coltrane’s albums with his classic quartet, or his later avant-garde adventures, there’s surely a lot to dig into when it comes to rare, hard-to-find artifacts from his celebrated body of work. If you’re an aficionado looking to expand your collection or a relative newcomer, here are 10 exceedingly rare Coltrane albums to pick up — if you’re looking to put down more than a few bucks. A kitchen-sink jazz release credited to “The Prestige All-Stars,” Interplay For 2 Trumpets and 2 Tenors brought together Prestige’s late-’50s top talent. Another “fireworks label” here, this time stamped with the their old New York address on West 50th Street. The relative obscurity of this release might be a factor in the slightly lower price — jazz labels had truly prodigious output in those days — but it’s a worthy find if you collect Coltrane, Kenny Burrell, Art Taylor or any of the other iconic players featured on Interplay. With the sheer star power involved, there’s truly something for everybody on this unique first pressing. By 1959, Coltrane’s contract with the Prestige imprint New Jazz Records had been expired for some time — he’d made his Blue Note debut with Blue Train two years prior, as well as some lesser-known work for Savoy Records in 1958. This makes The Cats, released on New Jazz in 1959, a slight oddity as much as a serviceable hard bop date. The Cats is still in print, but that New Jazz original pressing is hard to find, and at near-mint condition will set you back at upwards of €900.00 (about $1,150). Identifiable by the purple New Jazz label, reading “Long Playing Microgroove.” Coltrane’s hard, driving classic — which introduced his legendary “sheets of sound” soloing approach — is easy to find in any format, nearly anywhere. But this original pressing from 1959 will set you back €800 (about $935). This edition features a black label with silver lettering, and its black and white label differs from Atlantic Records’ usual blue-green design with the note “Long Playing — Unbreakable.” If you’ve got over $900 burning a hole in your pocket, this original Atlantic pressing of Giant Steps is one unique — and spendy — way to own one of bop’s most hallowed albums for yourself. This 1957 classic from Trane’s days on Prestige can be found for upwards of $400 in its original pressing. It’s identified by the yellow “fireworks label,” complete with a stamp of Prestige’s old mailing address at 203 South Washington Ave. in Bergenfield, N.J. The slightly lower price may be due to the quality of the Lush Life pressings found on Discogs, but also that Lush Life is a bit less recognizable than, say, Giant Steps or A Love Supreme. This original album was also more of a hastily assembled cash grab on Prestige’s part than a Coltrane-approved release, but the music itself is close to perfection. The only collaborative album between Coltrane and vibraphonist Milt Jackson is a stone-cold classic. Interestingly, the first pressing doesn’t feature a trademark or even read as “Mono” or “Stereo,” but “Full Dynamic Frequency Spectrum,” whatever that means. At $100, a mint first-edition of Bags & Trane can be yours for much less dough than many other Coltrane rarities, which routinely climb past $1,000 by sellers. And the music itself, of course, is indispensable. It’s one of Coltrane’s most radiant collaborations in a career full of them. If you ever needed a gateway into Coltrane rarity collecting, Bags & Trane may be it. Coltrane’s eponymous 1963 album often slips under the cracks in comparison with his other early-’60s material, but it’s world-class from front to back. And for about $400, you can own a first pressing in very good condition in its ABC-Paramount iteration. Bob Thiele’s endearing liner notes in the original sleeve say it all: “John Coltrane and his men have something to say musically … there will be plenty of accolades in newspapers and magazines about the virtues of this album.” Can’t argue with that; though Trane’s most revered work was still to come. This rare first pressing of an underrated LP contains a harbinger of jazz to come. If there’s one Coltrane record that you can find in almost any record collection, regardless of jazz knowledge, it may be 1965’s ultra-spiritual A Love Supreme. But a first pressing in mono is a tougher find, with copies commanding up to $700. This original glossy gatefold edition bearing producer Rudy Van Gelder’s name in black wax has proved to be highly collectible. Even the most ubiquitous Coltrane release can’t be found too often in its original pressing — back when its experimental, modal sound made its initial impact in the mid-’60s. The hefty $700 price tag reflects the hallowed nature of Supreme, an LP that hasn’t lost its power in five decades. 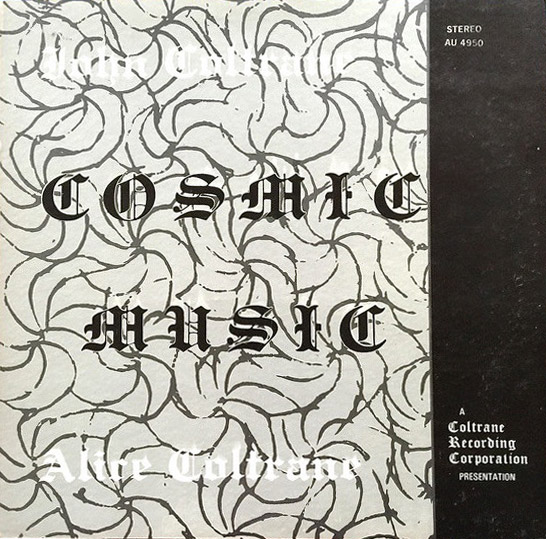 John and Alice Coltrane’s strange, eclectic collaborative album Cosmic Music was initially self-released by Alice via the Coltrane Recording Corporation before Impulse! reissued it. The self-release is not easy to find at this point, with copies listed on Discogs for over $600. This also goes for many of Alice’s solo works, which were often released herself or through her ashram, under the banner of the Avatar Book Institute. The sleeve of the old Cosmic Music pressing is notable for its handmade look and Olde English typeface, immediately suggesting something more solemn than sophisticated. Everything Coltrane recorded for Atlantic Records is included in this box, specifically Giant Steps, Coltrane Jazz, My Favorite Things, Bags & Trane, Olé Coltrane, Coltrane Plays the Blues, Coltrane’s Sound, The Avant-Garde (with Don Cherry), and the compilation Coltrane Legacy. It almost doesn’t get better than that run of albums — one which straddles the line between his traditional past and genre-busting future. Having it all on 11 LPs isn’t just a way to hear the music. At that physical size, it’s bound to be a conversation starter. You almost can’t do better if you’re going to buy an entire era of Coltrane in one go. This 2000 set is still in print on CD, but only available on vinyl via third-party sellers in a whopping nine-record box. Whichever format or price range you spring for, you get everything Miles Davis and John Coltrane did for Columbia, complete with previously unissued alternate takes and mixes. If you do go for the limited-edition vinyl, you get it individually numbered with a 24-page book containing rare photographs from this integral jazz collaboration. The recordings within vary between Newport Jazz Festival, Studio D at Columbia Records, and various other legendary locales. A truly crucial document, and a rare one at that when it comes to vinyl.