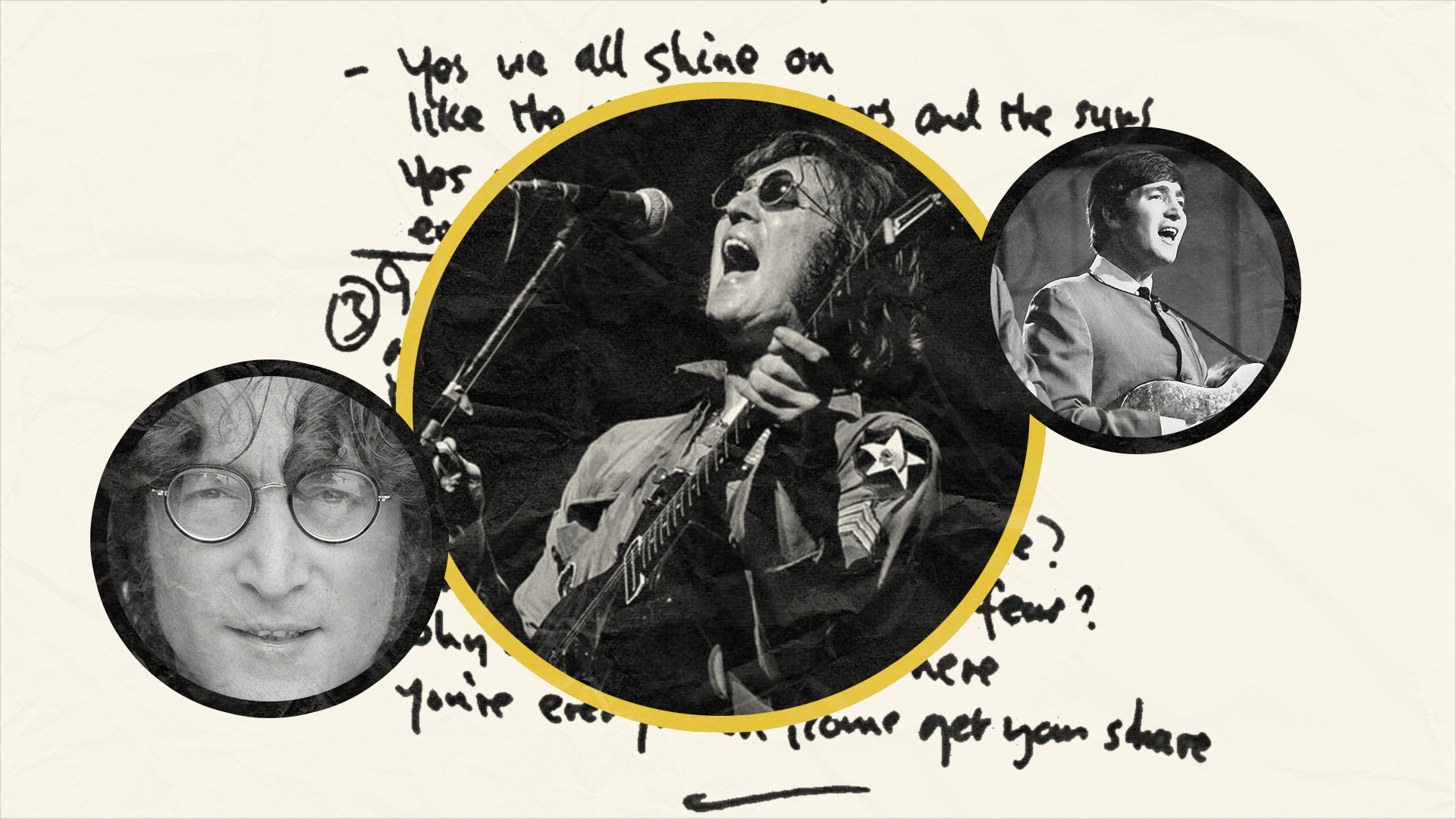 John Lennon has been gone for nearly 40 years, and arguably, everybody on the planet has thought of him at least once. These days, Andy Partridge, who led the Beatles-warped rock band XTC, thinks of him regularly, but not in the way you’d expect. Thanks to Lennon’s nonsensical poems, the Beatle has burrowed into his daily vocabulary.  “When I think of the royal family, I think of them as living in ‘Buckinghell Parcel,’” Partridge tells Discogs. “And breakfast cereal — I still think of having a ‘bowel of Rice Krustchovs.’”

Others in the music business, too, are inspired by Lennon in less-discussed ways. While working on Gimme Some Truth, a Lennon greatest-hits remix disc that arrives this Friday via Capitol/UMe, producer and production manager Simon Hilton was blown away by Lennon’s mastery as an arranger, for which few people credit him. And after 50 years of trying, guitar educator and YouTuber Mike Pachelli still can’t replicate Lennon’s deceivingly tricky strumming on “All My Loving.” “That is so difficult to do,” he tells Discogs. “And he’s doing it effortlessly in front of 70 million people.”

If Lennon had lived to see 2020, this Friday, October 9 would mark his 80th birthday. Is he an underrated artist? Not exactly; he led the most successful act of the 20th-century and remains loved by myriads of rock fans. Do any aspects of John not get enough ink? To seven musicians, producers, and engineers who spoke to Discogs, the answer is a resounding, “Yes.” And that goes for his art and poetry, his guitar ability, and his virtuosity as a studio musician.

Ever since at least The Daily Howl, an irreverent newspaper he drew and distributed to his Quarry Bank schoolmates, Lennon drew cartoons and wrote poetry and prose. His visual art was quick and decisive with evocative use of negative space; his Lewis Carroll-inspired writings in 1964’s In His Own Write and 1965’s A Spaniard in the Works used tortured English in scaldingly witty ways.

“I think he is undervalued as a Dadaist visual artist,” singer-songwriter Eric Slick tells Discogs. “His doodles remind me of Sergio Aragonés’ work in Mad magazine. He’s got the rapid, simple line work. It’s also hilarious. He injected his absurdist sense of humor into his art.” As per his writing, “He was another child of the Goons,” singer-songwriter Robyn Hitchcock, who, by way of his band the Soft Boys, came up in the English new wave scene along with Partridge, tells Discogs. “His writing is so funny and cruel too.”

“That’s what made it funny,” Partridge contends. “They cut through a wide swath of un-PC these days. If his humor were just, ‘Take my wife, please,’ you’d just be falling asleep. It was funny and shocking at the same time. You got humor with a smack across the face, which imprinted it deeper.”

“I think his comedy and surrealism was his strongest point,” he continues. “That was in everything he said, everything he sang, everything he wrote. You can hear it in conversation. It’s branded through like a stick of rock. Instead of having Brighton’ through the stick of rock, it has ‘Lennon.’ It doesn’t matter where you cut it; it’ll still say, ‘Lennon.’ That’s the surreal humor in his thinking.”

Lennon was responsible for the band’s early success, but he was arguably the third-best guitarist in the Beatles. While George Harrison constructed elegant lines beneath their melodies, Paul McCartney added fireworks to songs like 1966’s “Taxman,” 1967’s “Sgt. Pepper’s Lonely Hearts Club Band,” and 1969’s “The End.” But despite never learning to read music — and calling himself a merely “OK” guitarist — Lennon was a magnificent rhythmic thinker.

“On ‘All My Loving,’ those constant triplets are extremely difficult to do,” Pachelli tells Discogs. “John does a constant up-down, up-down, up-down, but he accents it with perfect, constant triplets. He was an extraordinary guitar player.” If you search “John Lennon guitar” on YouTube, Pachelli is near the top; his most popular video, which focuses on Lennon’s guitar abilities, has garnered more than 1.6 million views.

“What’s important to understand about John’s rhythm playing, first and foremost, is that when John would write a song and play it to the band, his rhythm would depict what they would play,” he says. “Although George was a cherry on top, playing cool riffs and great solos, and Paul’s bass playing is integral, the embryonic part of the song was John playing rhythm guitar, saying ‘Here’s how this song is going to go.’”

“John would find a melody, then rather than bother to change the melody, he’d change the chord under it and keep the same melody,” Partridge adds. “Then, for a breath of fresh air, he comes up with a waltz-time piece, like in ‘We Can Work it Out‘ and ‘Happiness is a Warm Gun.’”

For Gimme Some Truth, Hilton and engineers Paul Hicks and Sam Gannon remixed 36 of his best-known solo songs from scratch, from “Instant Karma! (We All Shine On)” to “Mind Games” to “Watching the Wheels.” The primary aim, Hilton says, was to restore his voice — which he often buried in the mix to his insecurity — and thereby restore each song’s emotionally connective power.

“Honestly, when you listen to his voice isolated, it gives you goosebumps every single time,” Hilton tells Discogs. “His ability to transfer empathy of emotion to the listener makes him the best artist that’s walked this planet.”

“Many of these songs are so famous that you know what they are in your head,” Hicks tells Discogs. “But if you cross-reference them with the multitrack, you’re like, ‘Actually, his vocal could be a bit louder. I want to hear John’s vocals. I want to hear more of that rage or sadness or love.’ John’s vocal is very important.” (“There’s that quote: tell the truth and put a backbeat on it,” Gannon tells Discogs.)

Despite his reservations about his voice, Lennon was a studio pro by the time he went solo. “So, they go to Hamburg,” Hilton says. “They learn a massive repertoire of songs to the point where they can play pretty much anything. They do their 10,000 hours in Hamburg. They come back to the UK; they tour endlessly for five years. They spend a hell of a lot of time in Abbey Road. So by his late twenties, early thirties, he’s one of a few people who are absolute experts in the field of performing and recording music.

“He would know what to play and what not to play, and how not to embellish,” Hilton continues. For example, he tells the story of when the comedian Tommy Smothers played guitar on “Give Peace a Chance.” “John showed him the chords, and what to play, so he played what John told him to play,” he says. “But then he started playing the same chords up the neck and adding sus4 chords, going kind of off the beat to try to impress John. John said, ‘No. Just keep it simple. Don’t start being too clever.’ He just knew how to do it!”

As ubiquitous as Lennon remains, these musicians, engineers, and producers can’t stop returning to his well. Last year, Partridge and Hitchcock dropped their joint EP Planet England, which leads off with “Turn Me On, Deadman,” a reference to a Lennon-related conspiracy theory. Slick is the drummer for Dr. Dog, a psychedelic band cut from Lennon’s cloth. Hilton says more Lennon remix projects are on the way. During the COVID-19 pandemic, Pachelli is hanging out in his minimalist home in the South of France, still trying to nail “All My Loving.”

“I miss his presence in the world, and his voice still so much,” Hitchcock says. “If Paul and Ringo can make it to this age still sounding good, I’m sure John would have. Bless him, wherever he is.”

“I sometimes dream I’m in conversation with him,” Partridge reveals. “I loved his humor, his strangeness, seeing him interviewed on TV shows, watching A Hard Day’s Night and Help!, reading his books, stuff like that. He taught me to be a smartass, which I thank him for.”

Pachelli glances at his Rickenbacker 325 and his Epiphone Casino, the very guitar models with which John worked his underappreciated magic. “He certainly inspires me to this day,” he says. “I’m just really grateful that he popped in for a while.”